This Space Is Getting Hot 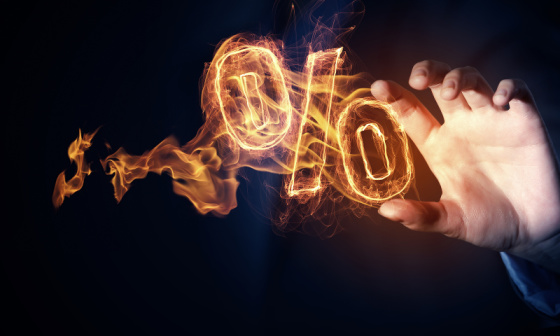 There are things you can replace

And others you cannot

The time has come to weigh those things

This space is gettin’ hot

You know this space is gettin’ hot

-Althea by The Grateful Dead

This week will be a very graphically-oriented blog post. As I’ve been writing about, the Fed has completely pivoted to full hawkish mode. Things are getting very hot right now in the world of interest rates and its impact on financial markets and the real economy. If there was any question in terms of the Fed’s hawkish pivot it was put to rest with Chairman Powell’s setting the stage for a 50 basis point increase at the May FOMC meeting.

The market is now pricing in a small probability of a 75 basis point increase at the May meeting. 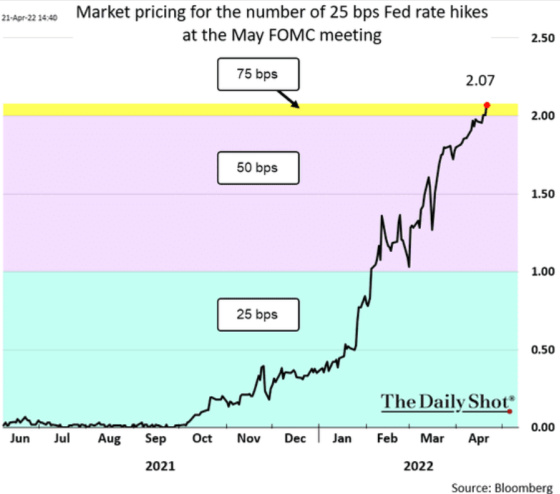 As well as at the June meeting. 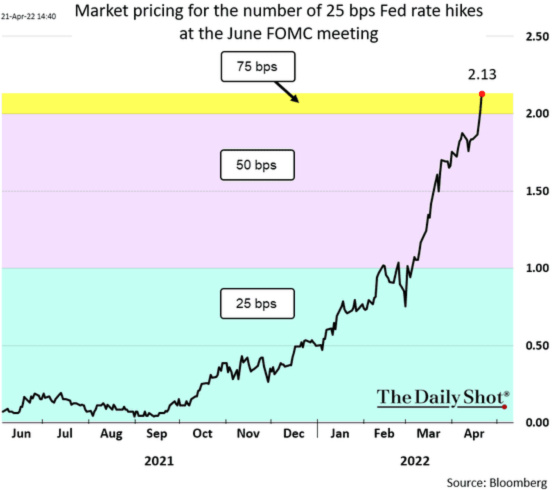 The market is now projecting the Federal Funds Rate to be a bit under 2.75% by the end of the year. 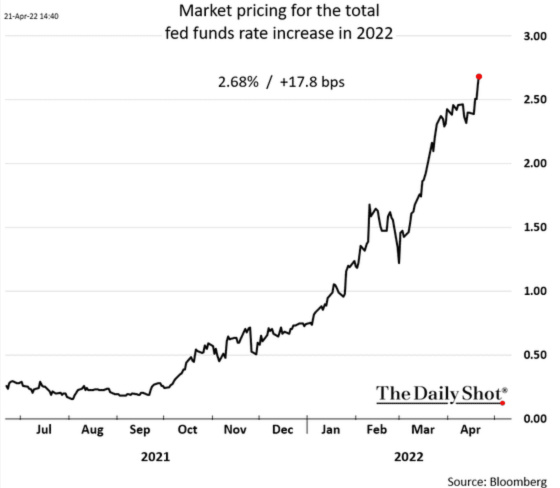 Parts of the yield curve have inverted again with the more rapid increase in shorter-term rates versus longer-term ones. 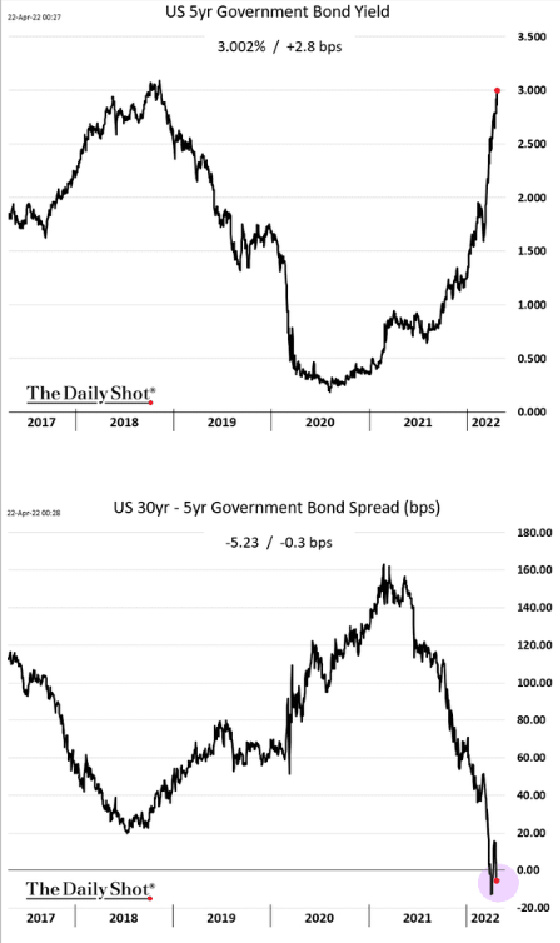 The market is now pricing in the highest inflation expectations since Treasury Inflation-Protected Securities (TIPS) were first issued. 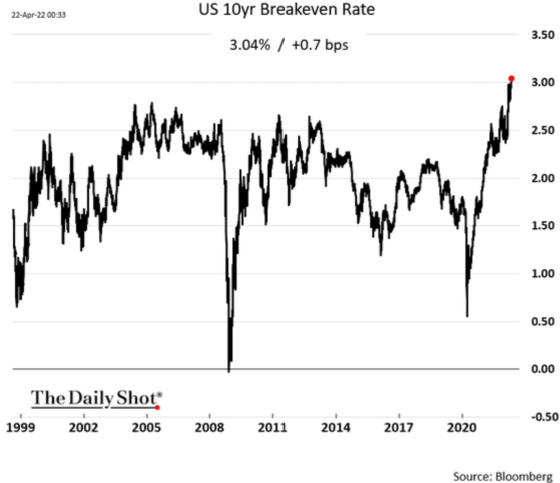 All of the above charts can be summarized by the following one which shows that this is the worst bond market since these returns have been calculated, which started in the mid-1970s. 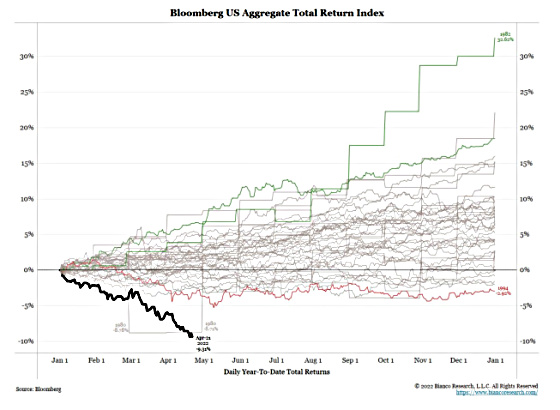 I admittedly was wrong by believing that inflation would be transitory as I felt like the longer-term trends that have been keeping inflation manageable would ultimately be more powerful than the Covid stimulus that was immense, but temporary, combined with loose monetary policy. What I do still believe, however, is what the next graphic depicts. With every tightening cycle and the corresponding increase in long-term rates, something gets broken in our highly financialized economy. I think this will ultimately necessitate the Fed having to cut rates again. 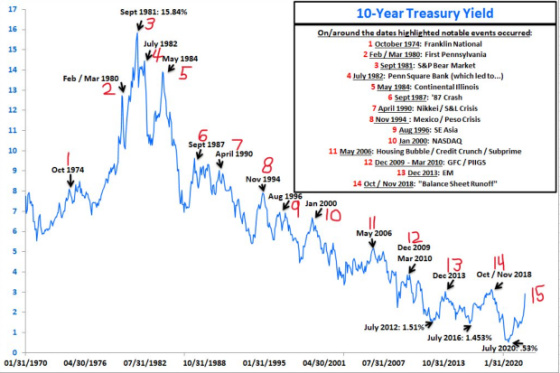 Housing is one place to look for possible problems based on the unprecedented spike in mortgage rates in such a short period of time. 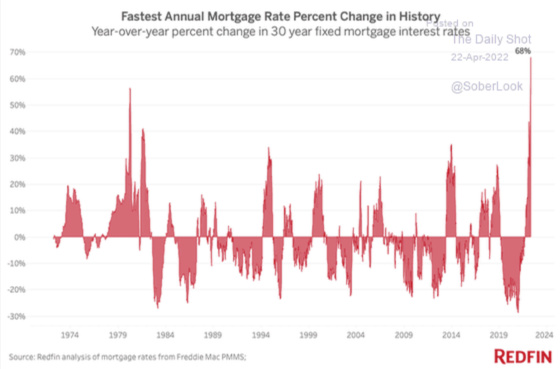 Especially when one sees how high home prices are relative to incomes. 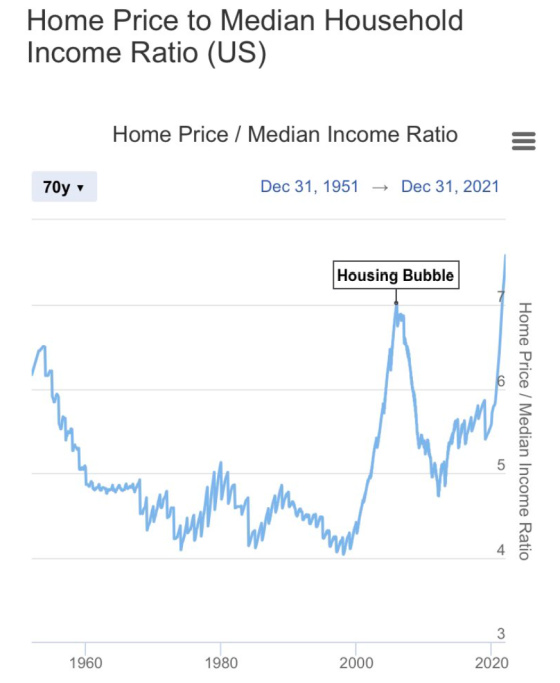 And yet, inventory is virtually non-existent. This problem may become even more acute as people who were thinking about selling and paying off their lower-rate mortgages now have to buy at very high prices with much higher mortgage rates. This will most likely keep more people in place and make the supply of available homes for sale even more constrained.

A couple of canaries in the coal mine. One is the significantly deteriorating outlook for future business activity from the most recently released Philadelphia Fed Manufacturing Survey. 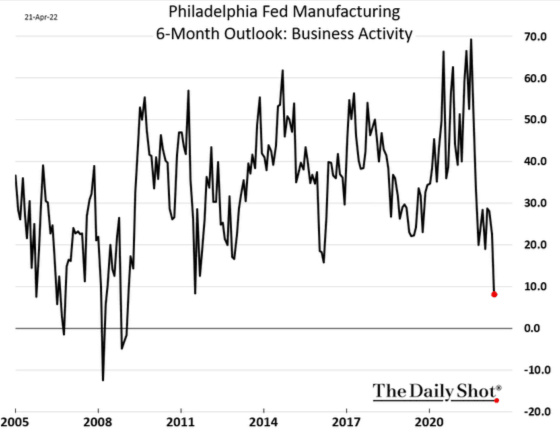 The New Orders component was a major component for the very negative outlook. 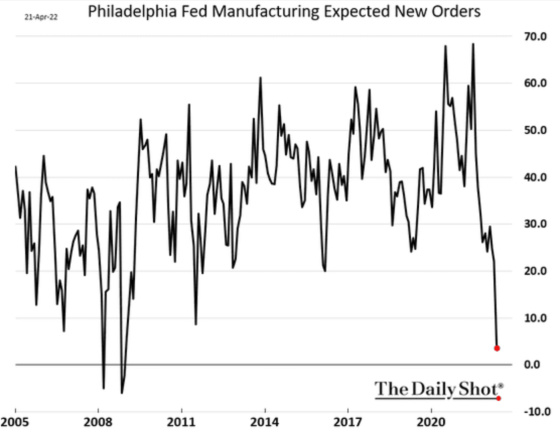 I also remain concerned about food prices, more for social instability in developing countries than domestically. Although with gas prices quite elevated and so many other items costing a lot more, purchasing power is becoming more constrained. People will prioritize food so this will probably do some crowding out of other consumer purchases. 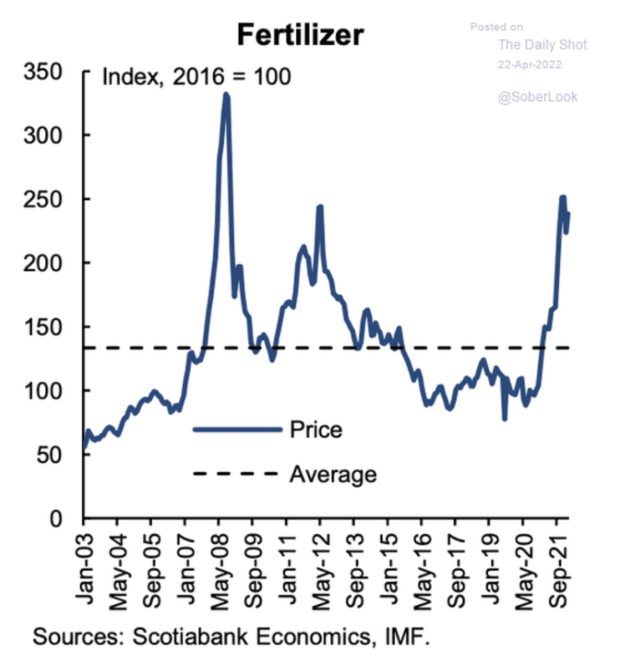 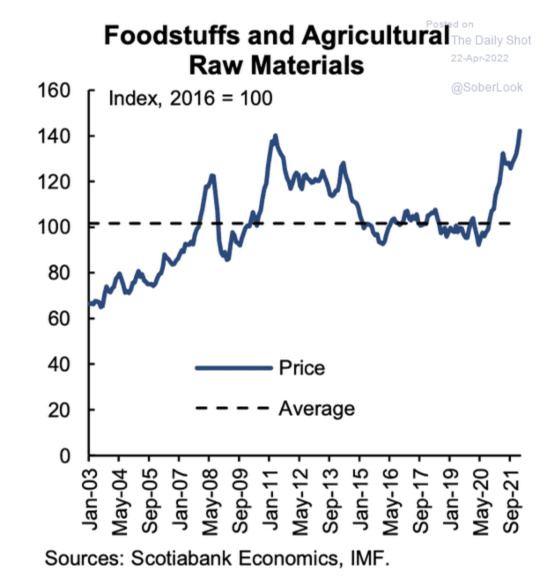 This chart shows how various sectors tend to do during tightening cycles. Real estate has historically been the second-best performing sector which tends to be counterintuitive since it’s believed that higher rates hurt real estate values. 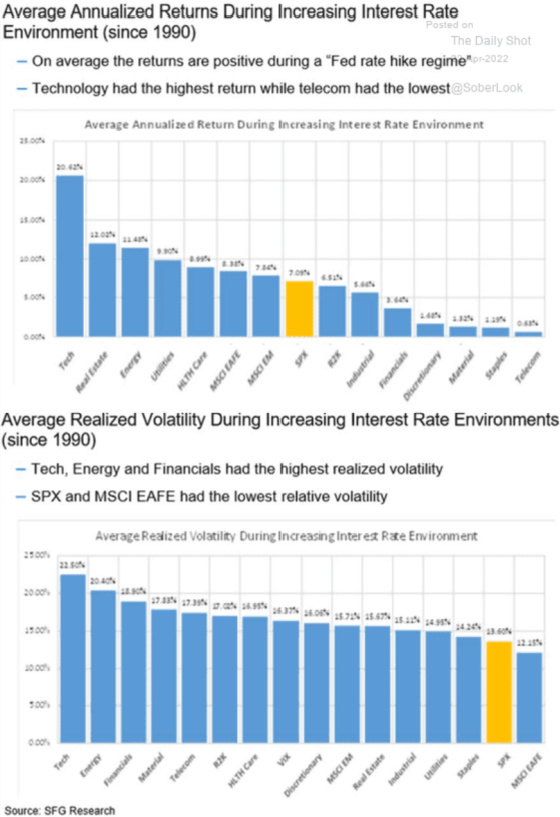 Apartments have great fundamentals, which should only improve as buying a home becomes even more challenging absent a material economic slowdown or contraction that slows household formations or reduces the number of households. With that being said, a lot of properties that have been purchased over the last couple of years have been financed with high leverage utilizing floating rate debt with high spreads. These aggressive loans were made based on the belief that short-term interest rates would remain low enough for owners to capture the very strong rent growth trends to materially increase their Net Operating Income. This would put the lenders in a much safer position because the increased cash flow would give the borrowers more coverage to service debt and repay the loans when they come due in three to five years.

With the Federal Reserve going into full hawkish mode, the apartment space, which has been very hot, is now going to be hot for a less positive reason. Owners who have utilized this type of financing will now be under a lot of pressure to service their debt once short-term rates exceed 2%, which is just around the corner. It takes a year or a little more to reprice all of the leases in a community whereas the debt service increases will be fast and pronounced.

As I have mentioned previously, we are not immune to the consequences of higher rates given our variable rate concentration. The difference for CWS is that we have been much more conservative in terms of the amount of financing we have used and our average spreads are probably 1.25% to 1.75% less than many of our competitors who have used more highly leveraged financing vehicles. We estimate that our coverage ratios will drop to around 1.5 (Net Operating Income/Debt Service) with short-term rates at around 3% whereas that is where many of these more highly leveraged loans have been starting off with rates at around 0.25%. At 3% rates, they are not going to produce enough operating cash flow (in the short run) to cover debt service.

The lyrics cited at the beginning said there are things that you can replace and others you cannot. And yes, the time has come to weigh those things. Right now our conservative loan structures are not replaceable by many of our competitors unless they have significant amounts of capital to pay down their loans since they would not qualify for enough financing to refinance their current balances.

I would not replace our conservative financing in a space that is going to get very hot. We are going to feel some of the heat but I don’t think we will get burned like some of our more aggressive competitors.