Stimulus: Should I Save or Should I Go (Spend) 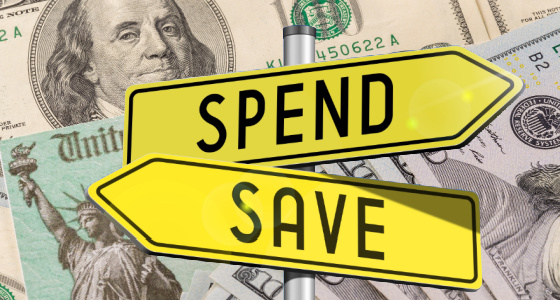 Economic growth is projected to increase quite substantially now that the $1.9 trillion stimulus has been passed. The following chart shows that economists are forecasting the strongest growth since the Reagan years. 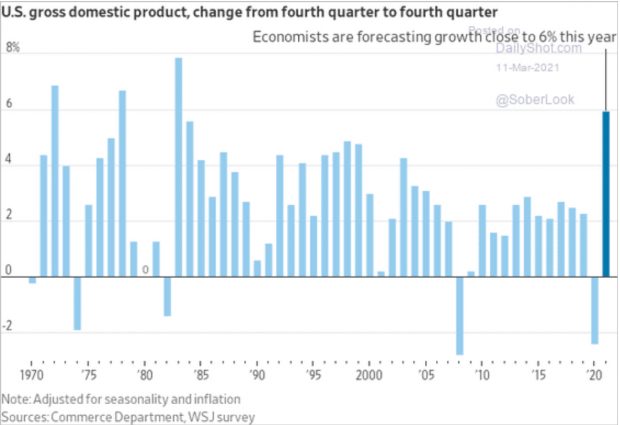 Not surprisingly, a lot of this projected growth is predicated on the spending of built-up savings from multiple stimulus packages that have passed and been disbursed. The following chart shows how savings has grown quite substantially, not only in the United States but around the world. 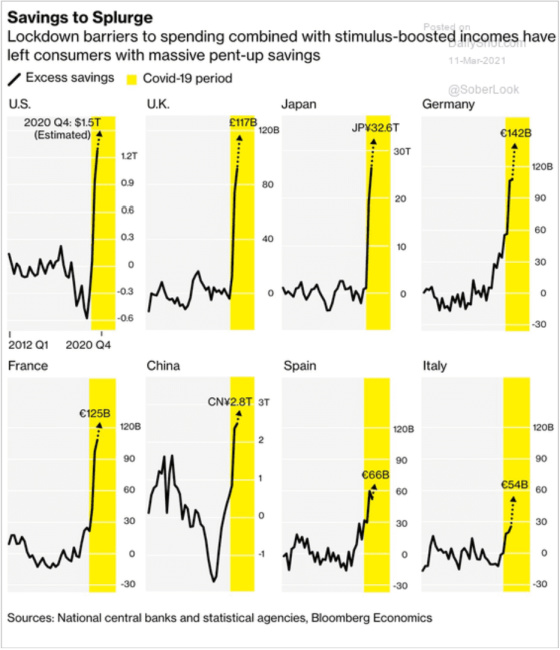 Asking the right questions can create focus and separate the signal from the noise. As I have thought about this, and based on reading an opinion piece from an economist/investor I respect, I have concluded that the following is the most important question for me to give me insights into the direction of long-term interest rates: Are the economists right or have they overestimated the amount of spending that will occur from people receiving more government support?

Gary Shilling is a well-known economist and investor who has a track record that I admire greatly. He has made many correct calls over the years so when he makes a prediction I pay close attention. In a recent opinion piece on Bloomberg, he asserts that the coming economic boom will be a mirage. He believes that the vast majority of people will save their stimulus payments, just as they have with previous ones, and this is a trend that has been in place for many years now.

Americans are using their savings to build assets and reduce debt, a long-term trend that was already well underway. Back in the 1960s and 1970s, household debt averaged 60% of after-tax income. That debt includes home mortgages, auto, and credit card loans as well as student loans. But starting in the early 1980s, free-spending and big-borrowing consumers pushed that ratio to 134% in 2007. The rate began to fall with the financial crisis and has nosedived recently. Nevertheless, at a recent 92.% in last year’s third quarter, it’s still a long way from the 60% norm, and I’m a believer in reversions of long-term trends. 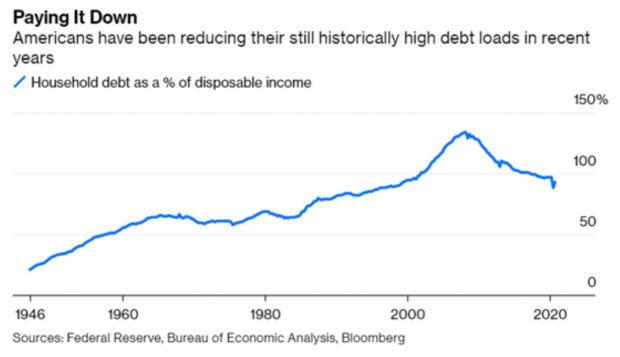 If Shilling’s reversion to the mean hypothesis is correct, then we have a long way to go for individuals and households to rebuild their savings to get to the 60% norm in the graph above.

What do surveys reveal about people’s intentions regarding their stimulus money?

They seem to corroborate Shilling’s belief that most people will add to their savings versus spending. According to this survey, people estimate that they will save approximately 55% of their third stimulus payment. 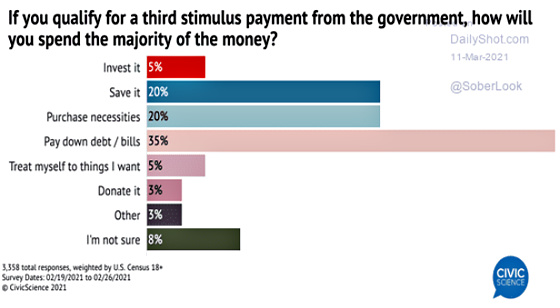 Since one of the major goals of the stimulus is to get money in the hands of people who make less than the median in terms of income, renters are a good representation of this cohort. In their case, one can see that renters with financial hardship didn’t have the luxury to save much of their past stimulus checks, other than paying down credit cards, while those renters without financial hardship were actually able to save some of it.

One can see from this chart that, based on internet searches, consumers’ interest in borrowing is quite subdued which would seem to corroborate Shilling’s hypothesis and may suggest more of a desire to save versus spend. 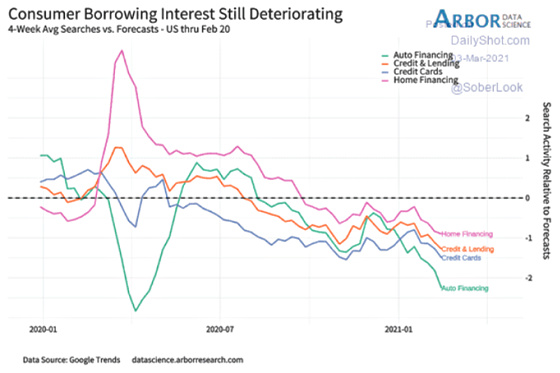 Here is another headwind to spending that I think is underappreciated: Gas prices. As gas prices increase, this diverts spending from other areas of the economy as it tends to serve as a tax that takes buying power out of the hands of consumers. 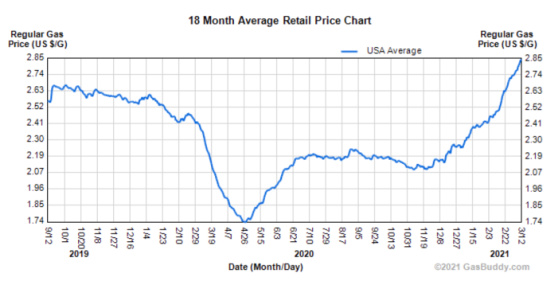 Shilling also makes the point that most of the pent-up demand for spending will be in the services category (restaurants, travel, beauty, concerts, theme parks, etc.) which don’t require much investment in inventory since services are consumed when purchased. As a result, with many households now having invested in fitness equipment, entertainment, etc. he doesn’t see a big manufacturing/inventory boost from the spending increases that will take place.

Gary Shilling isn’t the only one skeptical that the new stimulus will unleash a torrent of spending that will be inflationary in the long run. J.P. Morgan’s Chief Economist is another one who does not think it will spark inflation problems. He sees three principal reasons for this. The first is that the money will not be disbursed all at one time. In addition,  a large chunk of immediately disbursed funds is going to state and local governments that will also take their time to spend the funds as they prepare their budgets and go through their legislative processes. The second reason is that some of the spending continues providing unemployment benefits that were scheduled to go away. So technically this keeps funds flowing and isn’t “new” spending. Finally, the third reason is that he too thinks recipients will save approximately 50% of the funds.

Even so, we are somewhat less concerned than Larry Summers that it is too enormous for the economy to handle. For one, the federal government won’t disburse these funds immediately. CBO estimates that the budgetary impact for the remainder of the current fiscal year will be $1.16 trillion. Even this overstates the short-run impact, as almost $300 billion will quickly be disbursed to state and local governments who will be much slower to spend the funds (many of these governments are already working on their 2022 budgets). In addition, the extension of unemployment benefits will remove a near-term cliff effect—which is good—but removing a cliff effect doesn’t narrow the output gap, it prevents it from widening.

Of the remaining $680Bn, more than half will be stimulus checks. And while Those stimulus checks may see consumers save at least half of the payment, based upon last year’s behavior:

This highlights the importance for the economic debate of the size of the marginal propensity to consume out of these checks. Most of the evidence from last year’s stimulus checks indicates consumers were relatively prudent with those checks, likely spending less than half in the months following their receipt. There are sensible arguments as to why spending propensities could be larger or smaller with the ARP checks.

JPM concludes that while “time will tell, it shouldn’t take too long to tell” as “the checks will probably be disbursed before the end of the month, and the development over the past year of a number of high-frequency spending indicators should give an early read on how the checks are being used.”

I too will be watching high-frequency spending indicators to give an indication of how much spending is unleashed from stimulus #6.

Finally, from a contrarian standpoint, it would appear that investors might be too concentrated in bets that prosper from inflation and higher interest rates as the following charts show. 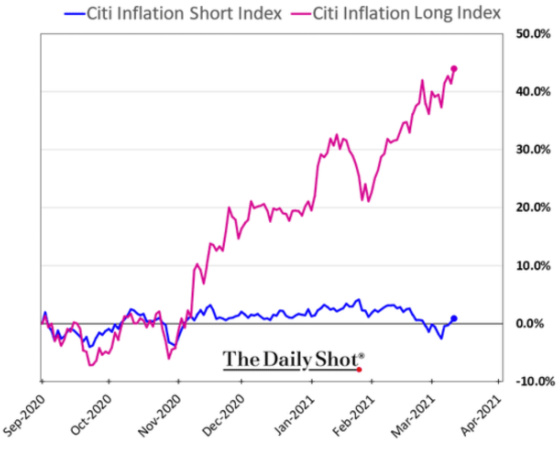 From a bond market perspective investors are all leaning in the direction of betting on higher rates. 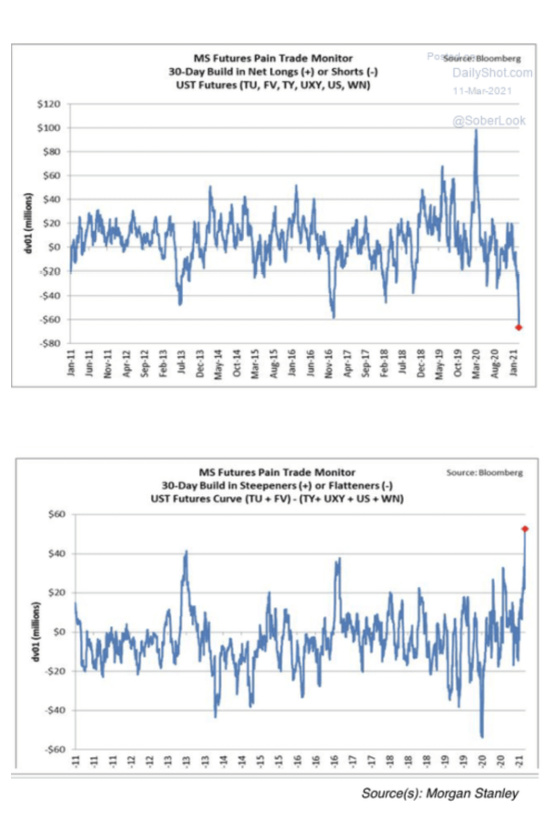 If history is any guide then the opposite will occur and we may be closer to the peak of long-term rates versus a bottom for at least the next six months. With that being said, March is historically the worst month for 10-year Treasury performance and April is historically negative as well so I wouldn’t be surprised to see yields go higher over the next couple of months. On the other hand, one can see from the seasonality chart from www.sentimentrader.com that the start of 2021 has been terrible for Treasuries so maybe most of the worst is behind us. 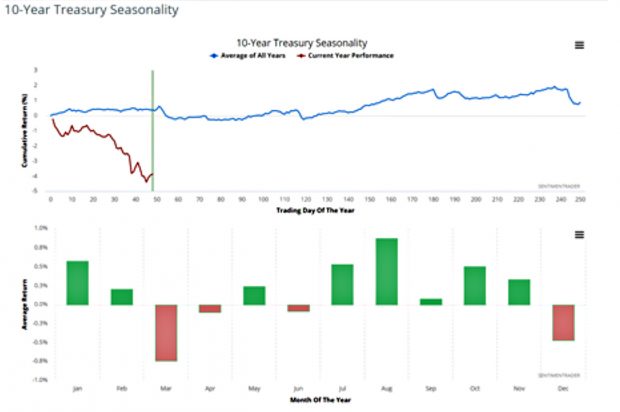 If there is still more pain ahead then we’re going to be in for a very bumpy ride until the summer when seasonality trends become much more improved. And given how positioned investors are against Treasuries, we may see quite a rally (lower rates), especially if the projected spending foreseen by economists does not materialize.