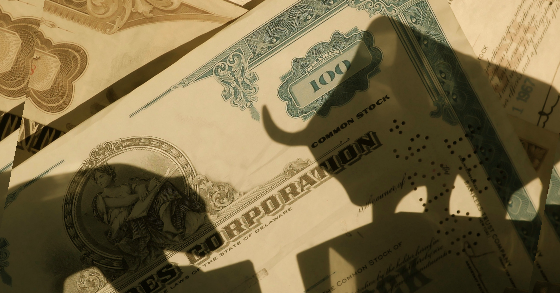 I couldn’t stay away from interest rates for too long. Last week was very fascinating. There was a lot of news that should have been quite bearish for long-term bonds but instead, yields moved down by about 5 basis points for the week for the 10-year Treasury note. This is something that investors should take notice of. When markets absorb bad news very well that’s generally a bullish sign and vice versa when good news comes out and prices react negatively.

We had higher than expected inflation on the wholesale front and CPI that was in line with expectations but elevated as the following charts show. 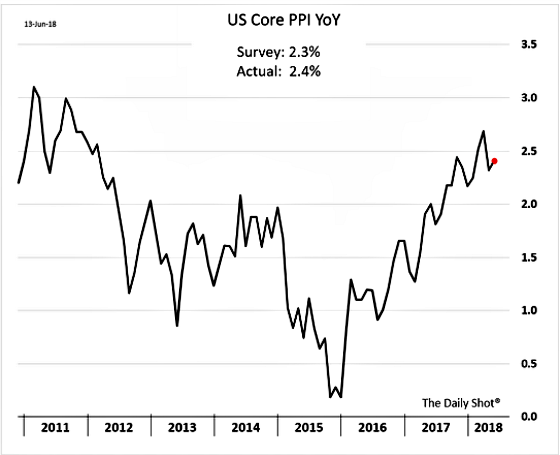 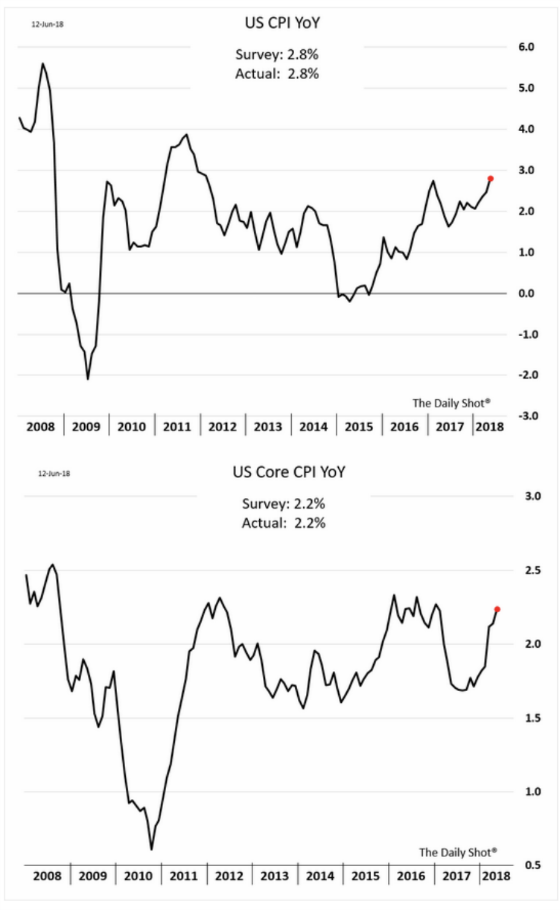 We had the Fed raise interest rates and signal more increases to come as well as better than expected retail sales. 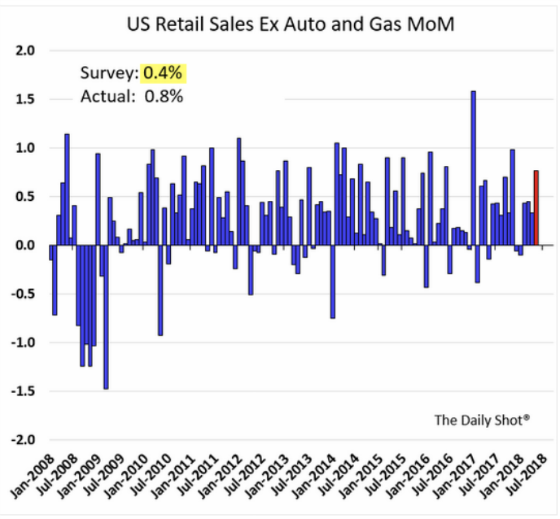 One would have expected long-term rates to have gone higher as a result of this bullish economic news and a more hawkish Fed. The opposite took place as the 10-year Treasury yield is around 2.92% and the yield curve, which I have been paying significant attention to, has continued to compress such that the difference between the 10-year yield and the two-year Treasury note yield is now about 37 basis points. We are now only a couple of Fed hikes away from the curve potentially inverting, or less if 10-year yields compress.

The following charts show the movement in the 10-year yield last week and the narrowing spread between 10s and 2s. 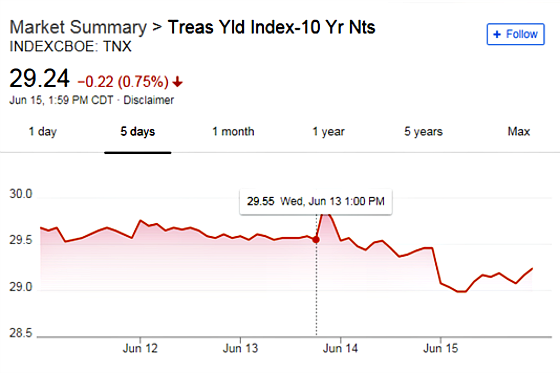 Perhaps the market is responding to some significant cracks on the international front with regard to emerging markets like Turkey, Argentina, Brazil, the Philippines, and Indonesia that have been facing capital outflows and depreciating currencies. This has required some of the central banks to raise interest rates significantly with Argentina being the most notable with short-term rates going to 40% and becoming the recipient of the largest bailout in IMF history. The following charts show the rapid depreciation of Argentina’s currency and the inverted yield curve with extremely high-interest rates there. 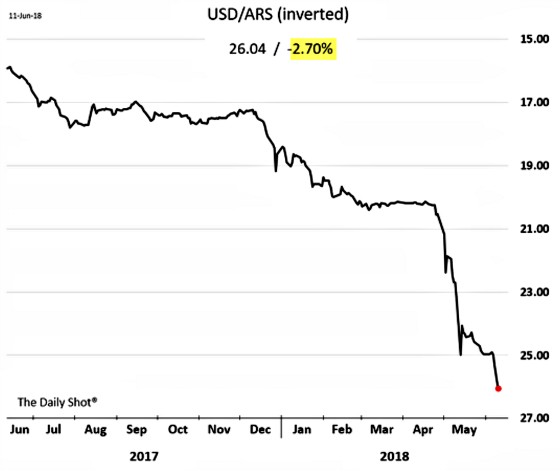 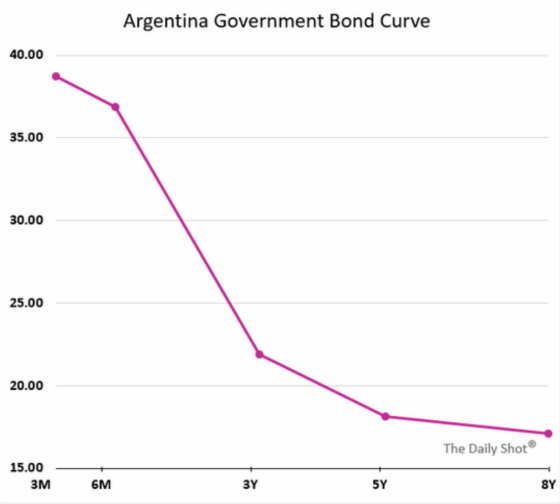 India’s top central banker recently implored the Fed to pay attention to the effects that it’s tightening of policy and the greater issuance of short-term treasury bills to fund the U.S. budget deficit is having on capital flows to emerging markets. The dollars that were flowing their way are now being redirected to the U.S. as the Fed reduces its balance sheet by selling securities or not letting them rollover when bonds mature as well as investors buying more short-term Treasuries as they are now yielding more. This is coming at the expense of emerging markets which are faced with significant dollar needs and this is hurting their currencies.

The following chart shows how the Fed’s balance sheet has been shrinking. 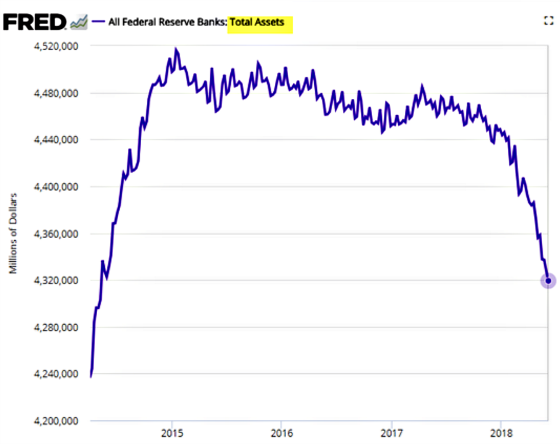 Here is what has happened to Turkey’s 2-year interest rates. 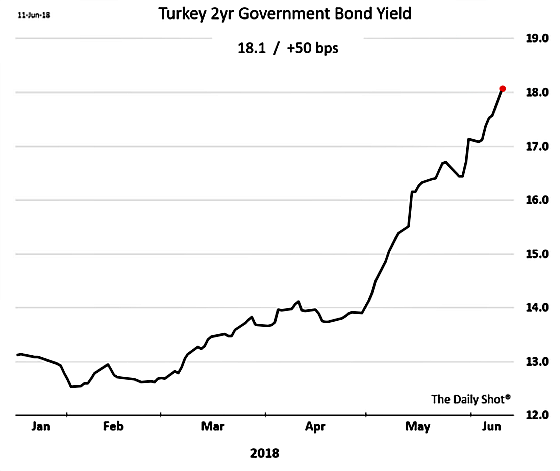 The Philippine peso has been under a lot of pressure as well. 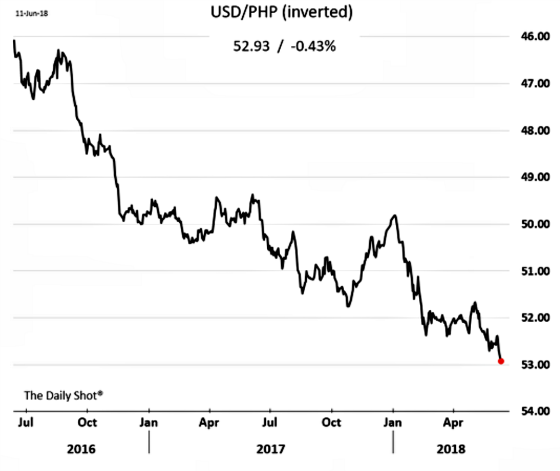 We’re starting to see some of the first forecasts of the Fed having to cut rates starting in 2020 as the following chart shows. 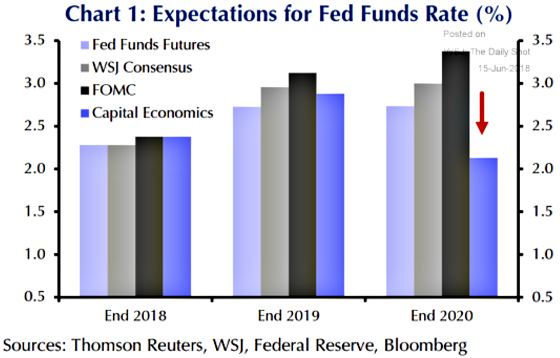 While some may find such an outlook surprising, perhaps it’s not the case if one looks at the Fed’s own forecast for the economy’s long-term growth rate. One can see that it has come down quite meaningfully and remains at a pretty subdued level. 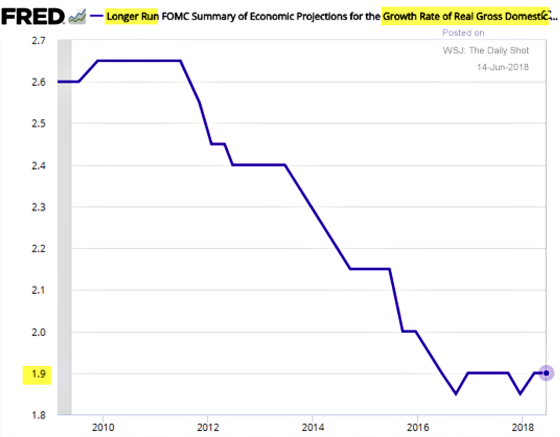 The same is true for the IMF and they bottom out at an even slower rate of growth. 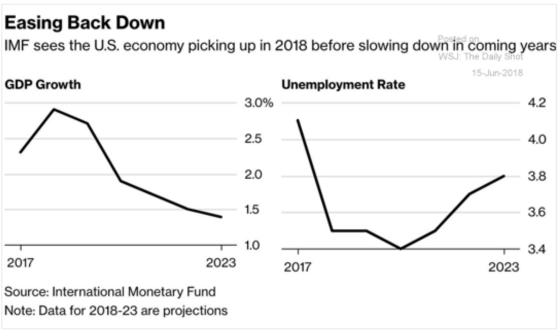 Finally, the world’s great engine of growth, China, is contending with its own economic challenges and decelerating growth as this chart shows for retail sales.

The same goes for fixed asset investment in China.

And when you add tariffs to the mix, that can’t be good for global growth, especially for China.

All in all, this fits into my personal narrative that the bond market is not buying into sustainable robust growth and that maybe the growth we are currently experiencing is not as robust as maybe some of the headlines and economists depict. It will be interesting to see what happens to Treasury yields over the summer as the strongest seasonal period is between July and November.