A Brutal Dichotomy: Time For Another Meaningful Stimulus? 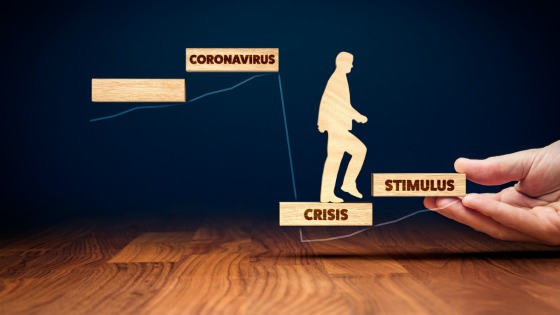 Fiscal stimulus has now started to contract while the Fed’s monetary support for the economy has tightened quite significantly over the last three months. See what the following charts show: 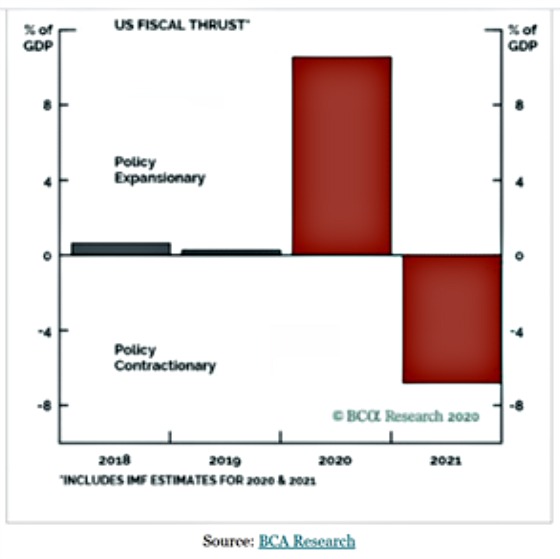 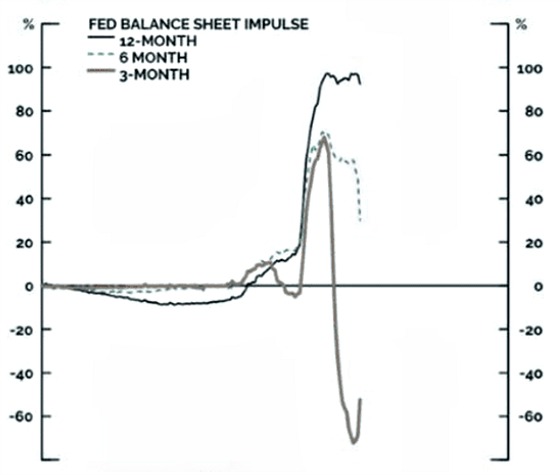 The following is from The Washington Post and shows how significant the support for the unemployed has been and how it will drop materially if no stimulus package is passed.

The unemployed are facing new challenges. Despite President Trump’s promises of a short-lived recession, 26 million people are still receiving now-diminished unemployment benefits. The unemployed went from receiving, on average, over $900 a week in April, May, June and July, under the first federal stimulus package, to about $600 for a few weeks in late August and early September under a temporary White House executive action, to about $300 a week now on state benefits.

With new COVID outbreaks taking place in New York City after seemingly having it under control in the aftermath of the horrific carnage it experienced, especially among the elderly, the dreaded fear of a winter second wave is a clear and present danger. The following shows how New York’s transmission rate is now above 1.0, meaning the virus is spreading quickly, albeit from a smaller base of people who have COVID. 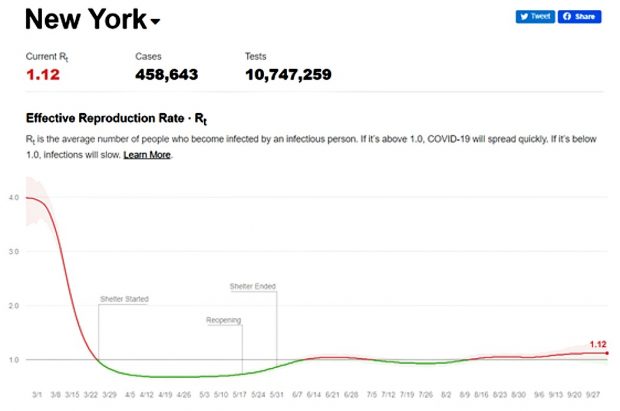 If New York is any indication, and President Trump and Melania now having tested positive for Covid-19, my sense is that people will remain cautious in taking action that will materially improve battered sectors such as airlines, hotels, theme parks, casinos, fine dining, etc. This will continue to keep economic output far below potential and make it difficult for people in these industries to regain employment. It will also keep the Fed on hold for a number of years in terms of raising interest rates.

As I discussed last week, this recession has been particularly hard on low wage earners. I read an in-depth article about this from The Washington Post that did a very good job of showing its impact graphically and narratively conveyed through stories of people struggling who had steady jobs in service sector industries that have been decimated. This is how they described the situation.

No other recession in modern history has so pummeled society’s most vulnerable. The Great Recession of 2008 and 2009 caused similar job losses across the income spectrum, as Wall Street bankers and other white-collar workers were handed pink slips alongside factory and restaurant workers. The 2001 recession was more unequal than the Great Recession: After the 9/11 terrorist attacks, travel and tourism jobs vanished and low-wage employment fell 7 percent below the previous year’s level, while high earners remained largely unscathed. Yet, even that inequality is a blip compared with what the coronavirus inflicted on low-wage workers this year.

“It’s an even more unequal recession than usual,” said Ben Bernanke, who led the Federal Reserve through the Great Recession. “The sectors most deeply affected by covid disproportionately employ women, minorities and lower-income workers.”

These charts show just how painful it’s been for the lowest-earning workers. 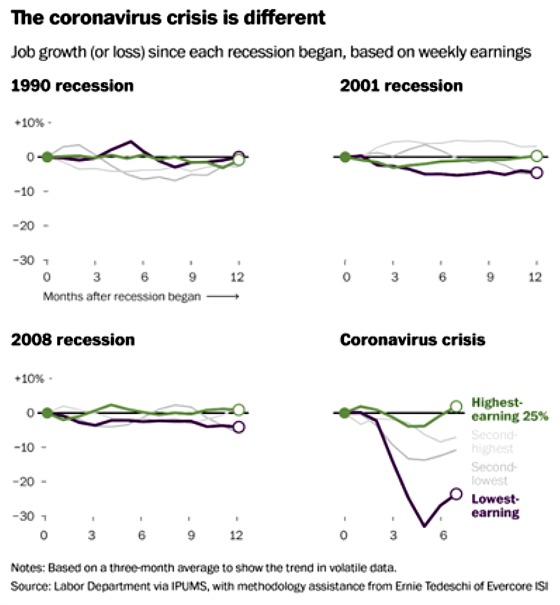 The following chart shows what percentage of various age cohorts are employed over time. One can see that every group experienced a very large drop, but some recovered more quickly than others. 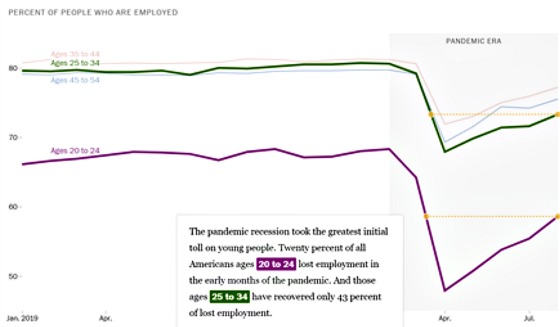 The article discusses how the higher wage earners recovered fairly quickly because they were able to work from home while lower-wage earners were not.

By the end of the summer, the downturn was largely over for the wealthy — white-collar jobs had mostly rebounded, along with home values and stock prices. The shift to remote work strongly favored more-educated workers, with as many as 6 in 10 college-educated employees working from home at the outset of the crisis, compared with about 1 in 7 who have only high school diplomas.

Moody’s chief economist Mark Zandi sums up the brutal dichotomy this recession has exacerbated dramatically and articulates what many fear.

“There are very clear winners and losers here. The losers are just being completely crushed. If the winners fail to help bring the losers along, everyone will lose,” said Mark Zandi, chief economist at Moody’s Analytics. “Things feel like they are at a breaking point from a societal perspective.”

As an apartment investor, I feel fortunate that our properties mostly cater to a customer base that so far has been quite resilient if the percentage of rents billed and collected is any indication. Only a very small percentage of our residents have had a delinquency event.  We have had a very high collection rate so far across the entire portfolio (in excess of 98%). Of course, this is an average figure, and some properties are underperforming and others that are outperforming.  I’m sure this has a lot to do with people prioritizing their rent payment, having customers less impacted financially given their wage levels and skillsets, and our properties being located in lower-cost, growing areas and primarily in less dense, suburban locations within those markets.  While past performance is no guarantee of future results, we are optimistic about the road ahead for our properties.
I can only imagine how challenging it will be for those owners whose residents are on the low end of the wage scale who have lost their jobs and are now facing a huge cut in government support or for those in New York City or San Francisco who have seen a large exodus of their residents during the pandemic. It will be interesting to see how quickly they return and at what levels.

Although we do not have properties in Los Angeles, I thought the UCLA findings in its latest economic letter were very telling about the stress lower-income renters are in who, under normal circumstances, because of L.A.’s high housing costs, are already under great financial pressure. I am hard-pressed to see how it doesn’t deteriorate from this point forward, absent a miraculous economic turnaround or another meaningful stimulus package. Here are some of their findings.

Here are the main finding and recommendations from the study. I find myself in agreement with it.

This recession has been absolutely brutal for certain segments of our economy and given that consumer and business behavior has changed materially with little prospect of it reverting back at anywhere near the same level anytime soon, I think those that had the rug ripped out from under them who worked in these impacted industries are going to need a lot more support for longer.