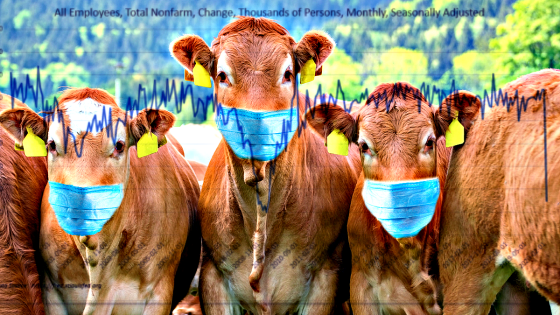 I’m not one to typically advocate following the herd but in the case of the coronavirus, I am having a hard time seeing an end game that doesn’t have herd immunity as the ultimate goal. And this could take a long time and lead to a lengthier economic contraction (to put it mildly) and even more massive federal intervention through government spending and Federal Reserve support of financial markets.

Unemployment Claims Surge Due to COVID19

Let’s turn again this week to the one chart that summarizes the economic cataclysm and that’s initial claims for unemployment. 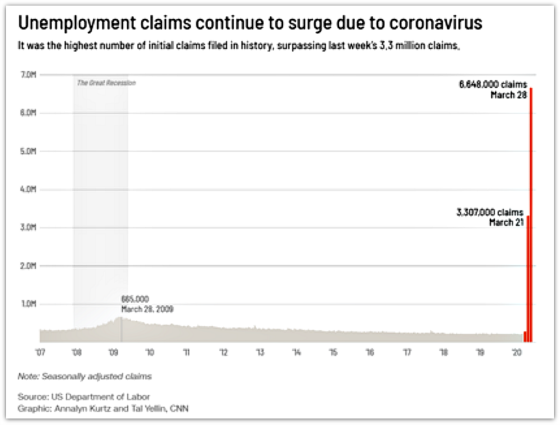 After exploding higher two weeks ago to 3.3 million, they went through the roof last week to 6.6 million. These are truly astronomical numbers and show the utter collapse of the economy virtually overnight.

And here is the horrific non-farm employment also showing the collapse in the job market. 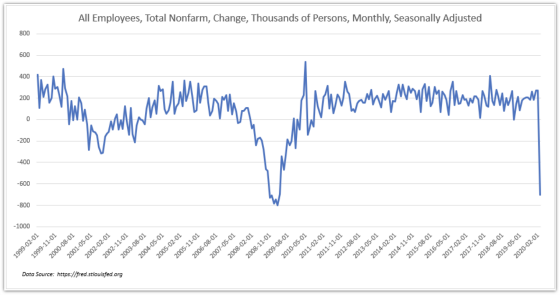 And with so many people out of work, there is growing concern that this will spill over to the housing market via millions of loans going into default as the following headline conveys.

The government will undoubtedly require forbearance for people who were swept under by the tsunami of this economic collapse but I’m not expecting debt forgiveness. So people will have accrued liabilities stacking up that they will have to get out from under when they finally get back to work. This can only serve to depress consumer spending (akin to burdensome student loans) and, when combined with industries that may not get back to pre-COVID-19 levels of demand, we may not have a snapback, V-shaped recovery like many were initially thinking. It may be very sluggish like what we experienced after the Great Recession and if it’s really bad we could look like Greece which is not a pretty picture at all as the following graph depicts.

I don’t really buy into the models that say if we remain sheltered in place for 30 days or 60 days then these are the deaths we can expect and then we can get on with our lives because we have the virus under control. I keep asking myself what is the trigger that will have governments let their people get back to their old routines? I keep coming back to herd immunity. Until that happens I can’t help but think that there will be more outbreaks that will lead to us having to reverse course, go back to ‘sheltering in place’, and increase demoralization exponentially.

People need the confidence to go back out into the world and be willing to congregate, travel, spend money (assuming they have the purchasing power to do so) and obviously this is lacking right now. The problem with this pandemic is not that there is a high probability that one will die from it or be severely impaired, it’s just that every major adult category, particularly for males, has evidence of being impacted. It’s not just old and infirmed but there are examples of seemingly younger and healthy adults stricken by it so one just can’t be sure so why take the chance? In addition, the CDC and WHO don’t come off as the most competent organizations. Take masks, for example. What the hell? Why not wear a mask? It was pretty clear that they were trying to play down their efficacy so there wouldn’t be a run on the bank in order to keep supplies for the medical community. I find this chart pretty compelling to influence me to wear a mask. 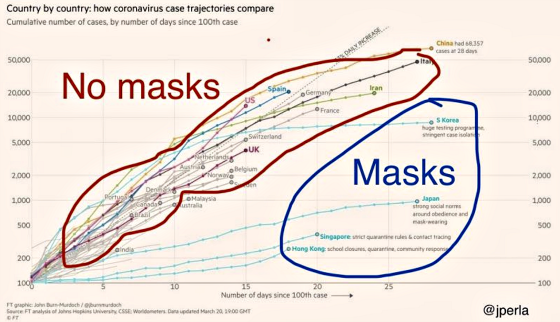 I recommend watching this video for more reasons why wearing a mask represents an enormously beneficial risk-reward trade-off.

Back to models. In an article on Medium, the authors bring up the same concerns I have about what happens when you let people back out after social distancing? They show, for example, two models published in the New York Times that estimate the number of infections based on two weeks and two months of social distancing. 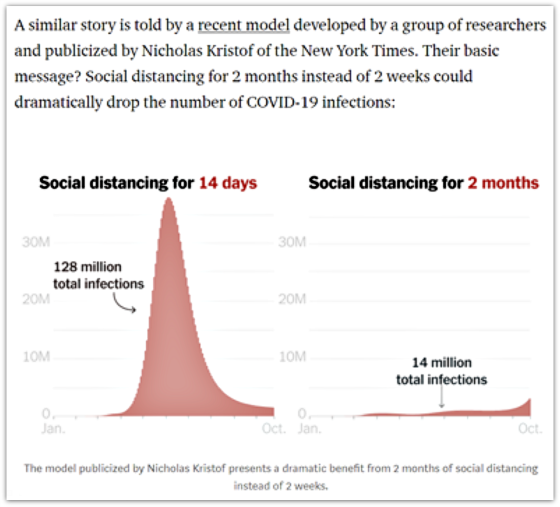 After viewing these two charts one might naturally conclude that it’s a no brainer to require social distancing for two months. But if you look at the second chart very carefully you can see that infections start to spike again after leveling off. Now that’s great. So here we go again having to shut down our working lives and head back home again. Not that I really mind as I love my home and I’ve been very productive working from home and, because I have an introverted side, I rather like my time in my isolated environment. An added benefit is that my daughter had to come back from overseas so it’s been nice having her here as well. I know I’m very fortunate, however, in having wonderful surroundings and enjoying being with my kids and there are huge economic costs to this situation which make it much more challenging for millions of others. I digress.

The authors run their own models and their conclusions are a bit sobering. They assert the following:

Unfortunately, extreme mitigation efforts which end (even gradually) reduce the number of deaths only by 1% or so; as the mitigation efforts let up, we still see a full-scale epidemic, since almost none of the population has developed immunity to the virus.

Uggh! It all comes down to needing a significant percentage of the population to be immune to COVID-19. Based on the transmission rate it’s estimated that approximately 70% of the population would have to be infected to achieve herd immunity. This would obviously be extremely challenging for the healthcare system and would lead to a large number of fatalities. So it seems like we’re playing for time to get to a vaccine or hopefully focusing on keeping the most at-risk people sheltered in place and taking a risk with those statistically expected to manage through relatively well if/when they get it. And yet, with that being said, we also have to manage the hospital and medical professional utilization as well. We can’t have the system overloaded. There are really no good choices here. It would seem like it’s equally important to get a reliable antibody test to determine who has developed immunities to COVID-19 so they can be deemed safe to go back into the world and workforce.

I’m obviously way out of my league here but one of the helpful things about this blog is that it’s a vehicle for me to work things out that I’m wrestling with. This premise is truly a work in process and in my opinion at this time based on the information I have available, but I see this lasting longer than the consensus and I expect trillions of dollars of deficits and, yes, despite the seeming contradiction, sub-1% 10-year Treasury yields and short-term rates close to zero for the next couple of years, if not for the next couple of decades a la Japan.