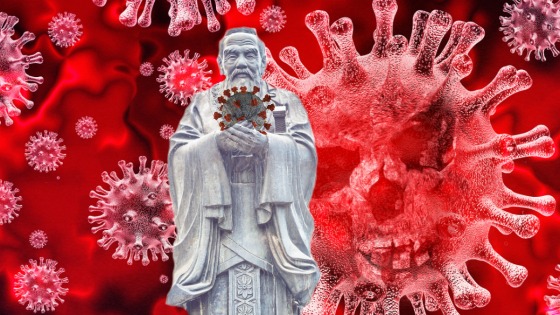 With China having gotten a lot of heat for Covid-19 I thought I would end this post with advice that I think one of its great philosophers would have given had he been alive today. Confucius lived between 551-479 B.C. According to Wikipedia,

The philosophy of Confucius, also known as Confucianism, emphasized personal and governmental morality, the correctness of social relationships, justice, kindness, and sincerity.

I think this belief system has in some ways permeated the decisions of governments, businesses, and individuals when it comes to pulling back from many communal activities in the wake of COVID with the goal of keeping one safe as well as others. People don’t want to get sick, they don’t want to get others sick, and it’s in society’s best interest to not overwhelm the medical system. Of course, one can argue what the appropriate actions and trade-offs are to avoid these risks, but these are the overriding goals of public policy and consumer and business behavior.

The news of President Trump getting Covid definitely rocked the world, although I don’t think many were surprised that he would eventually come down with it. The outbreak of Covid in the West Wing and among elites in Washington appears to have started at the Rose Garden event for the new Supreme Court nominee Amy Coney Barrett. This would suggest that this was a superspreader event in those numerous people who attended the ceremony have subsequently tested positive for Covid-19. What seems even more clear, however, is that someone in the White House is a superspreader as numerous people who work there have also tested positive, including, of course, the President. This article shows how widespread it has been transmitted via White House staff.

I try to keep up to date on Covid research so that I can be better informed to help protect myself while also allowing me to live my life in ways in which I can take prudent risks and not be a total hermit. Keeping up to date can also better help me make more informed economic assessments and weigh those in our investment decisions. For example, I think that after the last couple of weeks flurry of positive Covid announcements among White House officials, the President, Senators, Congressional workers, and Pentagon officials, as this headline from Rollcall shows, that the contagion risk will be at the forefront of people’s minds, particularly those in charge of making office re-opening decisions.

I don’t see how business people will not internalize what has happened to the President, White House staff, and many others in Washington D.C. more generally, and extrapolate it to their work environments. Doing so should lead many of them to conclude that they will need to remain very cautious about opening up their offices to full staffing. This will continue to keep the office economy very depressed and presumably have a negative economic impact on urban areas and rental housing, particularly in hard-hit cities like New York, San Francisco, Chicago, and Los Angeles.

One of the pieces of data that has me remain very cautious about the office economy recovering quickly relates to a new research report that was released on September 30th.

It involved the largest contact tracing study done to date and was carried out in India. They tracked approximately 575,000 people who were exposed to approximately 85,000 cases. Here is a fascinating conclusion.

While most people were not transmitters of the virus, a very powerful, superspreader minority has turned out to be quite efficient transmitters. That is what would make me concerned about opening up our office without social distancing and mask protocols as one never knows if there will be a super spreader in our midst. It is not an insignificant probability that one will be in the office environment, particularly the more people there are in an office and having a large number of younger workers as the research also showed that younger people are efficient transmitters, at least in India. And while the probability of getting Covid was relatively low, it unsurprisingly goes up quite a bit when exposed to it at home.

“Kids are very efficient transmitters in this setting, which is something that hasn’t been firmly established in previous studies,” Laxminarayan said. “We found that reported cases and deaths have been more concentrated in younger cohorts than we expected based on observations in higher-income countries.”

You definitely want to avoid a super spreader in crowded forms of transportation. In another article discussing the research, they discuss how the probabilities increase dramatically of getting Covid.

Prolific SARS-CoV-2 transmitters tended to spread the virus during prolonged close contact on buses and other forms of transportation, according to the researchers, who were also from Princeton University, Johns Hopkins Bloomberg School of Public Health, and Indian state governments. In such settings, there was a 79% chance of an infection occurring.

That compares with only a 1 in 40 chance of catching the virus from someone in the community who wasn’t a household member, Laxminarayan said. Children under 14, though, were found to be frequent “silent” spreaders of the virus, especially to their parents and peers.

The odds of contracting the virus is much higher from peers than from those in other age groups. Perhaps this suggests grouping people together in offices with different ages than having peers work closely together.

And for people who are skeptical that social distancing, masks, and avoiding large gatherings are not effective, then please read these next two graphics. The first one summarizes the state of Arizona’s experience. 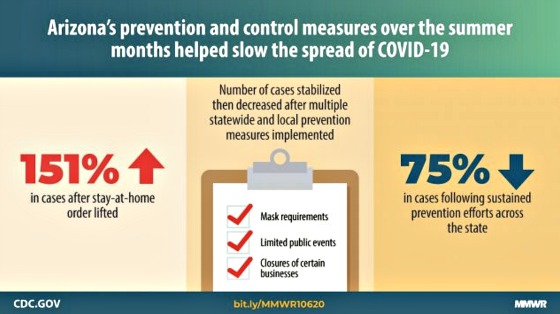 This next one summarizes what happened to a gathering of 20 people who were together for three weeks. 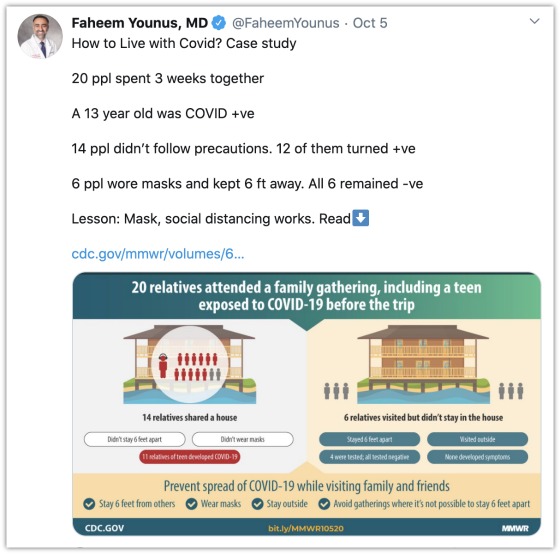 Since the focus of this article is on Covid and my belief that employers will not be in a hurry to re-open their offices, especially in the wake of the White House breakout, I thought I would end with some interesting survey results carried out by Cisco. Since Cisco’s Webex is a Zoom competitor, one may be concerned that they have a vested interest in people continuing to work remotely. With that being said, the findings of their survey pass the common sense test from my perspective.

Some 53% of larger organizations plan to reduce the size of their office space and more than three quarters will increase work flexibility. Almost all of the respondents were uncomfortable returning to work because they fear contracting the virus, (my emphasis) the poll found.

Cisco, the largest maker of networking equipment, recently surveyed 1,569 executives, knowledge workers, and others who are responsible for employee environments in the post-Covid era. The findings suggest many of this year’s radical changes to work-life will remain long after the pandemic subsides. (my emphasis)

The poll, conducted for Cisco by Dimensional Research, concluded that working from home is the “new normal.” More than 90% of respondents said they won’t return to the office full time. 12% plan to work from home all the time, 24% will work remotely more than 15 days of each month, while 22% will do that eight to 15 day every month. (my emphasis)

Confucius says “Beware of superspreader in one’s midst. So wear a mask and stay distant.”Click To Tweet

Confucius says “Beware of superspreader in one’s midst. So wear a mask and stay distant.” And with those words of advice, employers will remain reluctant to open up their offices fully for months to come, if not longer.