Revisiting the Spanish Flu: What Can a Dire Pandemic Look Like? 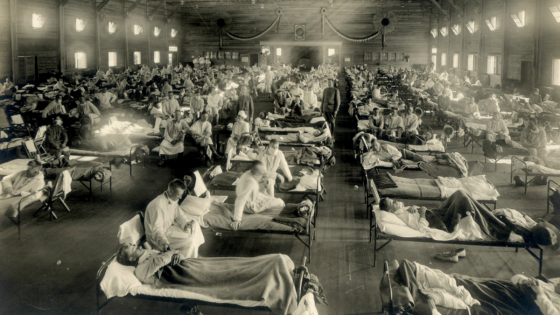 I’m admittedly obsessed by pandemics. I’ve been listening to the course on the Black Death via the Great Courses, I was in China at the tail end of SARS in 2003 and was intensely focused on what life was like during that time there, and of course, I’m following the coronavirus (COVID-19) very closely.

A couple of weeks ago I referenced some statistics related to the Spanish Flu of 1918-19 to create some context for what a really awful pandemic can look like. There is no question that China’s economy has been absolutely decimated by the quarantines that have been required to try to control the virus. And despite stock prices holding up well, Treasury investors are sniffing recession in the air as the following chart shows how 10-year yields have come down significantly since December when the virus was first revealed publicly by China. 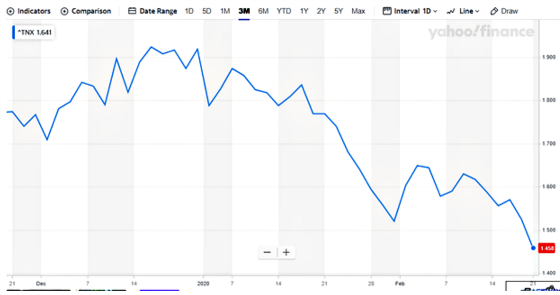 And if it starts to ripple throughout the world, no one knows how much it will cut economic growth.  Economic reports in the manufacturing sector have been weak and now this is spilling over to the service sector, which has held up well. 30-year Treasury yields have now hit a record low. 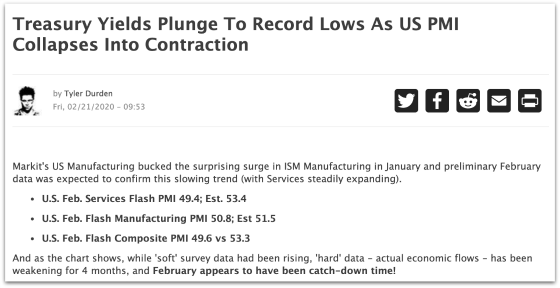 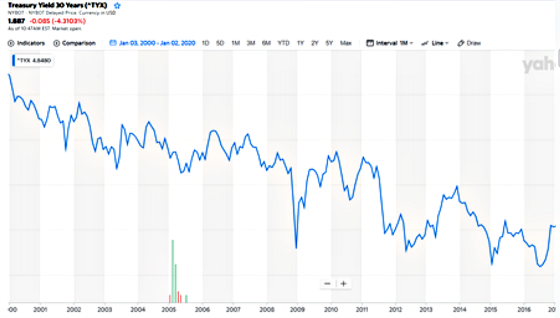 This will not only keep the Fed on hold but may force it to cut short-term rates to help stave off a recession.

Given my obsession with pandemics, I was curious as to what the economic impact of the Spanish Flu was. I started going back to old newspaper articles during that time but then came across a research report from the Federal Reserve Bank of St. Louis that not only did this for me but did a deeper dive into some of the ramifications and lessons learned from it. Before citing this research I came across an article discussing interest rates between 1914 and 1965.

10-year yields have come down nearly 0.50% since December so it’s not too dissimilar on an absolute basis point change from the time frame referenced above, although this move down has been more rapid.

The implication in the citation above is that it was the slow down from World War I ending and the corresponding adjustment that led to reduced economic activity. The author of the article on the Spanish Flu doesn’t think the pandemic was considered enough as a major contributor to the slowdown/contraction. The author attributes this underweighting of the pandemic to the following reasons.

Much of the news from the day focused on wartime events overseas and the current status of American troops. Thus, the pandemic and World War I were almost seen as one event rather than two separate events. Second, diseases of the day like polio, smallpox and syphilis were incurable and a permanent part of society. Influenza, by contrast, swept into communities, killed members of the population, and was gone. Finally, unlike polio and smallpox, no famous people of the era died from the influenza; thus there was no public perception that even the politically powerful and rich and famous were not immune from the virus.

One of the principal reasons the economic and societal impact was so consequential was because an unusually large percentage of the deaths were from young, healthy males who were the breadwinners and economically productive.

According to the author,

One source reports that out of 272,500 male influenza deaths in 1918, nearly 49 percent were aged 20 to 39, whereas only 18 percent were under age 5 and 13 percent were over age 50.13 The fact that males aged 18 to 40 were the hardest hit by the influenza had serious economic consequences for the families that had lost their primary breadwinner.

The total number of American deaths is estimated to be 675,000 so the impact is even greater, assuming the mortality demographics remained consistent in 1919. One of the consequences of this was that this led to a labor shortage in certain industries and resulted in rising wages, not only in the short run but over a longer period as well as two studies cited show.

The empirical results support the hypothesis: Cities and states having greater influenza mortalities experienced a greater increase in manufacturing wage growth over the period 1914 to 1919.

Another study explored state income growth for the decade after the influenza pandemic using a similar methodology.23 In their unpublished manuscript, the authors argue that states that experienced larger numbers of influenza deaths per capita would have experienced higher rates of growth in per capita income after the pandemic. Essentially, states with higher influenza mortality rates would have had a greater increase in capital per worker, and thus output per worker and higher incomes after the pandemic. Using state-level personal income estimates for 1919-1921 and 1930, the authors do find a positive and statistically significant relationship between statewide influenza mortality rates and subsequent state per capita income growth.

The following headlines show how devastating the Spanish Flu was in Little Rock and Memphis which are used as representative examples used by the author. The statistics cited remind me of what is happening in China, only it appears far worse there now. 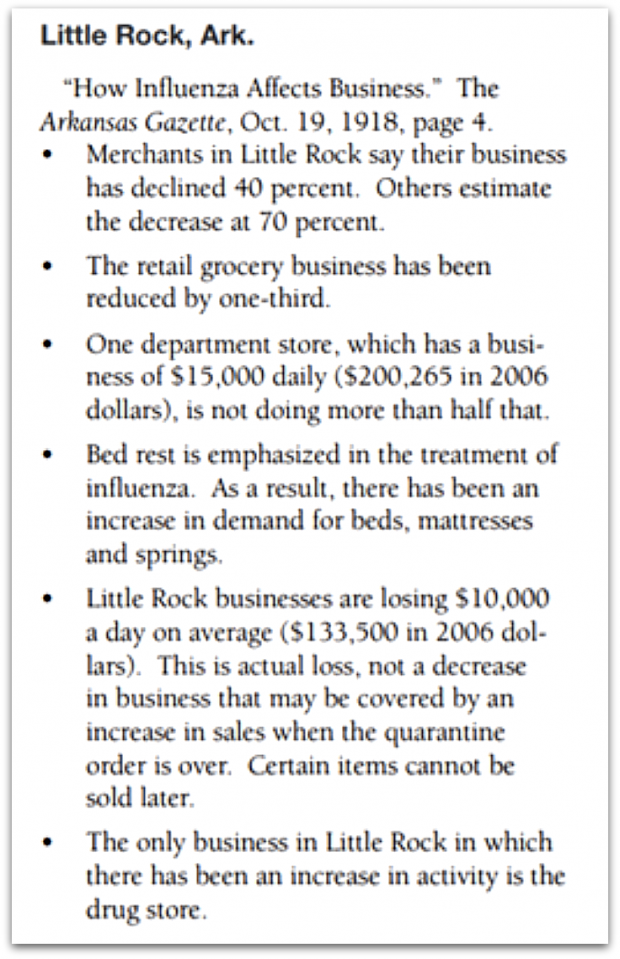 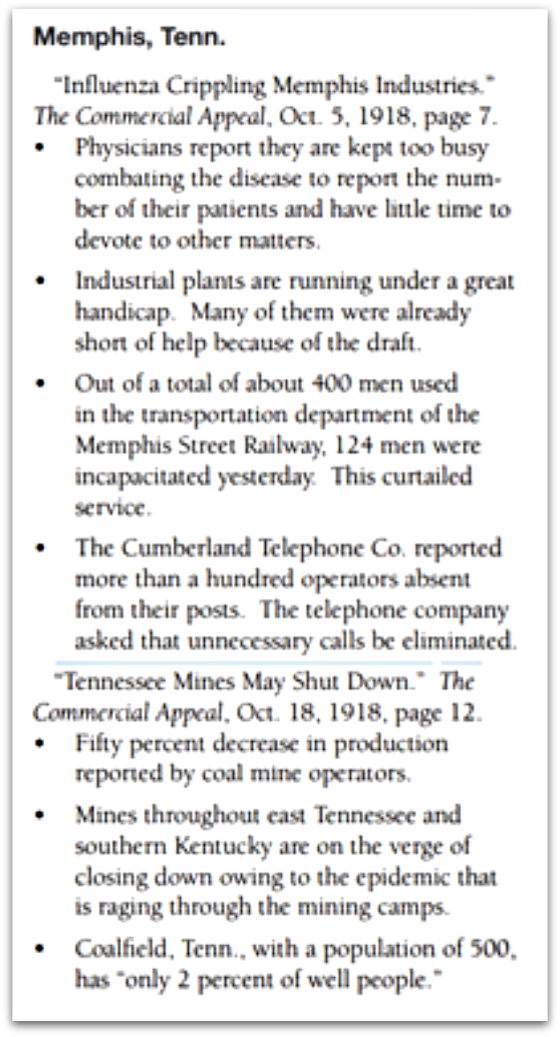 The more urbanized the area, the higher the mortality rate. We have clearly become more urbanized since 1919 so the United States has susceptibility to a pandemic because more people live in close quarters.

Sadly, the pandemic had a longer-lasting impact on people whose mothers were pregnant with them during the pandemic and they contracted the virus. The author cites the following research.

Using 1960-1980 decennial census data, the author found that cohorts in utero during the 1918 pandemic had reduced educational attainment, higher rates of physical disability and lower-income. Specifically, “(m)en and women show large and discontinuous reductions in educational attainment if they had been in utero during the pandemic. The children of infected 21 mothers were up to 15 percent less likely to graduate from high school. Wages of men were 5-9 percent lower because of infection.”

Although the author doesn’t make specific predictions about the economic impact of another flu pandemic, he does reference the following at the beginning of his report.

The World Bank estimates that a global influenza pandemic would cost the world economy $800 billion and kill tens-of-millions of people.1 Researchers at the U.S. Centers for Disease Control and Prevention calculate that deaths in the United States could reach 207,000 and the initial cost to the economy could approach $166 billion, or roughly 1.5 percent of the GDP.2 Longrun costs are expected to be much greater. The U.S. Department of Health and Human Services paints a more dire picture—up to 1.9 million dead in the United States and initial economic costs near $200 billion.

With the coronavirus’ death being less than 2,500, it is currently nowhere near what the Spanish Flu pandemic was. Nevertheless, it seems to have a very high transmission rate and is now spreading to many more countries. I can only imagine how ill-equipped many countries will be when they are faced with having to manage large numbers of infected people. North Korea and Iran particularly come to mind where there is already evidence of it being there with deaths in the latter and a shutdown of the border in the former.

Although the mortality rate appears to be relatively low, particularly when compared to SARS, many more people are contracting it and given how quickly it spreads quarantines seem to be a logical response to trying to slow its spread. This, of course, has devastating economic consequences as people can’t work and spend money as well as supply chains being impacted.

I have no idea what the ultimate economic and societal impact will be but bond investors are already pricing in a slowdown and the odds of it getting worse before it gets better seems very logical to me.