A Return to Charts - Focusing on Interest Rates and the Economy 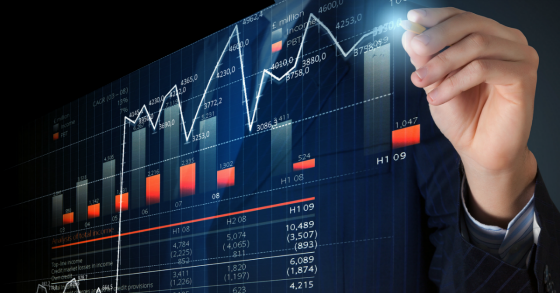 It’s been a while since I have focused on the economy and interest rates so I will return to one of my periodic chart-o-ramas to try to capture some of the dramatic changes taking place in various markets and how investors have gone from embracing risk to shying away from it, particularly in the corporate bond market. To capture how bad the carnage was in the stock and corporate bond markets, the following are the highlights from the daily report from sentimentrader.com that came out on December 21st:

The selling has become extreme as evidenced by some of the bullet points above and how rare these events are.

Turning to another indicator from Deutsche Bank, 2018 looks like it will be the worst year on record in terms of the percentage of assets with a negative total return. This comes after 2017, which happened to be the best year ever. If you don’t believe in regression towards the mean or what goes up must come down, then this chart should help convince you otherwise. It looks like the Trump Bump has become the Trump Slump. The good news is that next year should be better in that it’s hard for it to get much worse and history suggests that after steep down years, the percentage of assets with negative total returns tends to drop quite a bit. That doesn’t mean 2019 will be a good year, it just means there is a good chance it will be less bad. 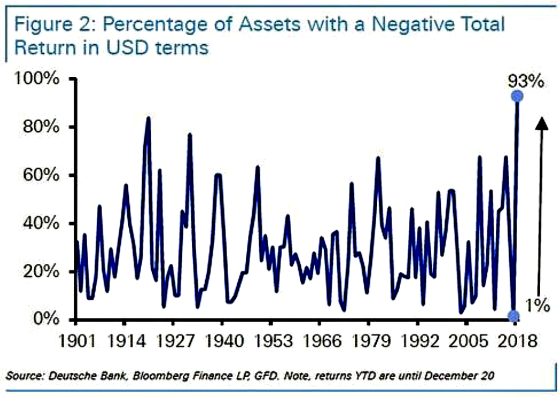 One of the global drivers of growth has been China. As the following charts show, however, China has been slowing down materially even in the face of significant debt growth, which is somewhat of an ominous sign. The charts reveal that China has been slowing in a consistent downward trend for over a decade. Future growth rates will be under pressure as China also faces a material slowdown in its population growth and will begin to age rather rapidly in the decades ahead.

This is the one part of the Chinese economy in which the rate of growth has been increasing. Unfortunately, rapid debt growth in the face of slowing economic growth is not sustainable. There will be significant debt write-offs in China over the next five years or so. 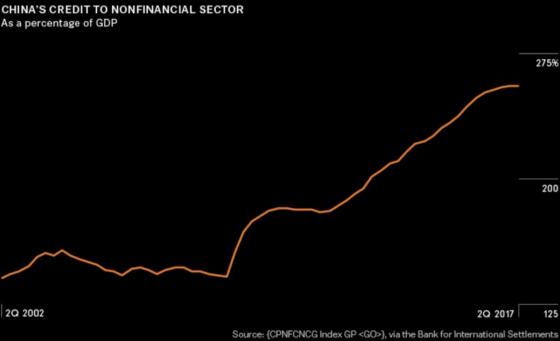 The growth rate of China’s industrial production is now at the bottom of the Great Recession. 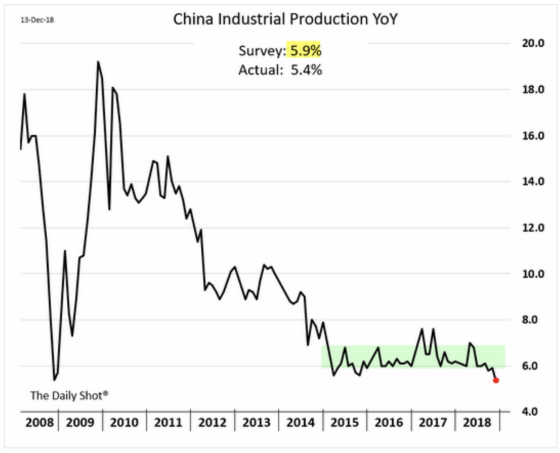 These next two charts suggest that China’s economy is reaching a much more mature phase which implies that we will continue to see lower rates of growth in retail sales and fixed asset investment, particularly given the large debt overhang impacting businesses and consumers. 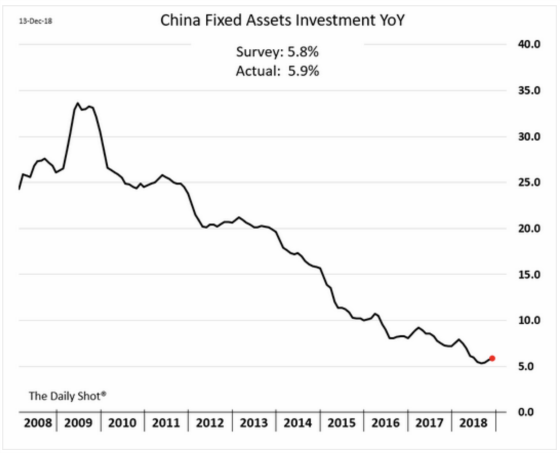 As we enter the later stages of the economic cycle we are starting to see credit quality deteriorate. The following chart shows the very large dollar value of company bond rating downgrades. Remember that this is happening even after tremendous fiscal stimulus, a very favorable tax regime for corporations, low unemployment, and elevated GDP growth. 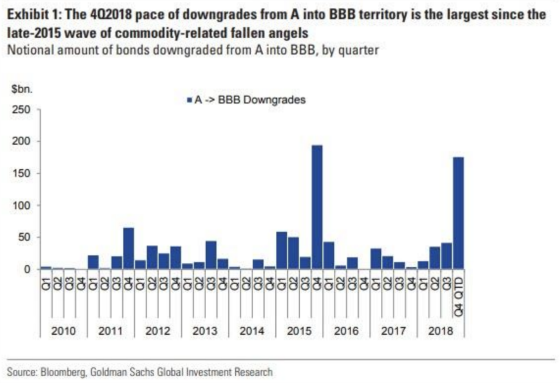 Deteriorating corporate debt fundamentals, combined with market volatility and a not so friendly Federal Reserve, have pushed bond investors to require higher yields as the following chart shows. 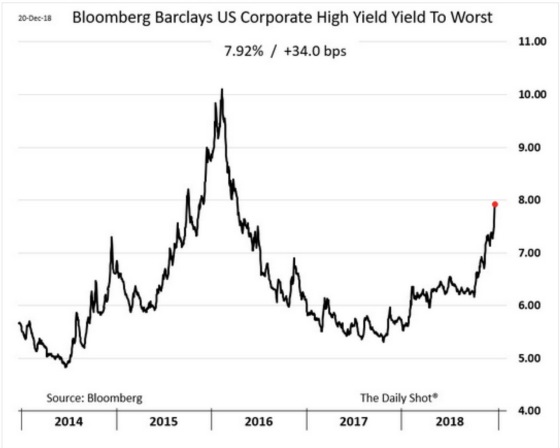 This has pushed total returns for debt investors into negative territory. This shouldn’t be surprising in light of the first chart presented in this blog post. 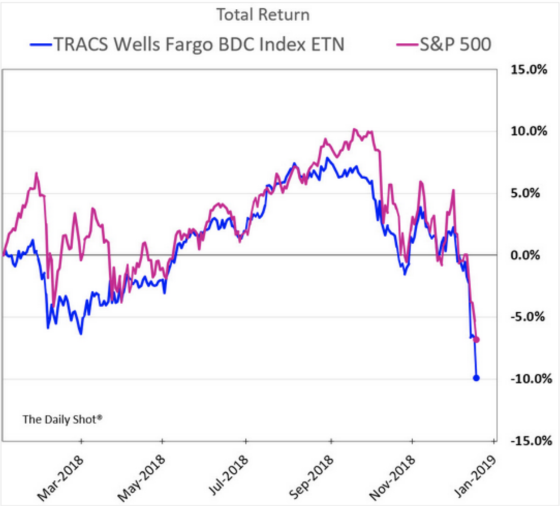 This has led to record outflows from loan funds. The Fed can try to ignore the market and believe that it knows best but if its policy path is very divergent from bond markets, then this can have effects on the real economy. Debt investors require higher yields to part with their money which pushes up borrowing costs and tightens lending terms which in turn can impact growth decisions and mergers and acquisitions. This, in turn, can impact jobs and wages as companies cannot access cost-effective capital to grow. This can ripple through asset markets by lowering their value and impact people’s spending decisions as they have less wealth to access. 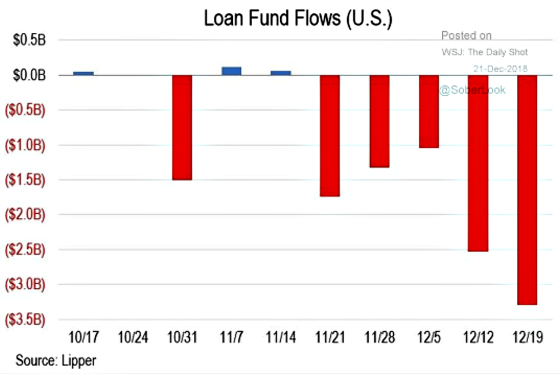 All of these factors have combined together to significantly tighten financial conditions. 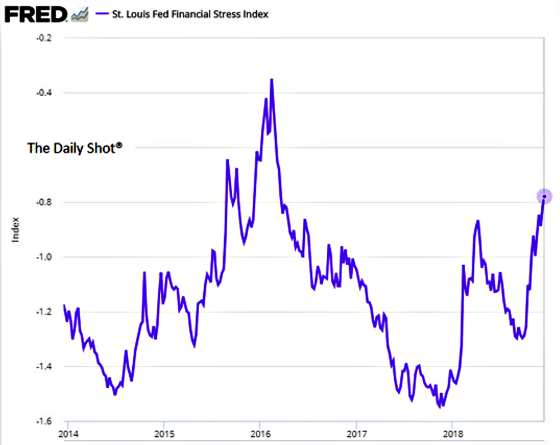 All of this has been happening against a backdrop of the Federal Reserve shrinking its balance sheet by pulling money out of the system which is showing up as shrinking bank reserves. Right now the Fed has been reducing its balance sheet by $50 billion per month. One of the reasons attributed to the additional market sell-off after the Fed raised short-term interest rates on December 19th was when Chairman Powell said during the press conference that the shrinking of the balance sheet was on automatic pilot. The market did not like that because there is a growing belief that the Fed’s balance sheet reduction is now serving as a drag on the economy and that a policy and attitude of automatic pilot implies a lack of understanding and/or sensitivity to how this is impacting the economy and will do so more significantly in the future. 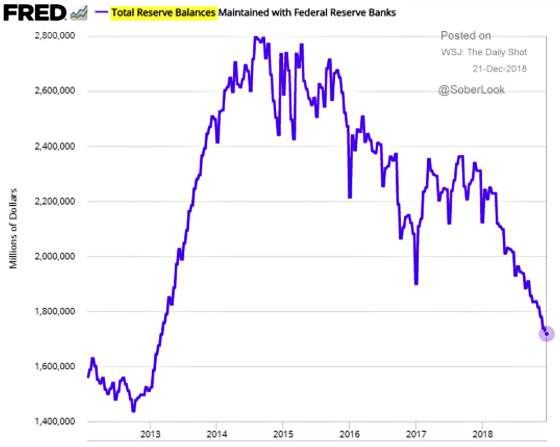 And while it looks like we have one more year of rather strong fiscal stimulus due to higher spending and lower taxes (for most, but not all), this will turn into an economic drag in 2020 in terms of its rate of change. 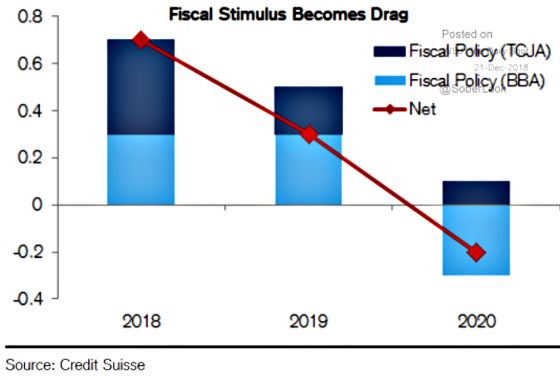 All of these factors speak to a slowing economy and this has been reflected in the flattening of the yield curve as depicted by this chart which shows how the difference between 10-year and 2-year Treasury notes has narrowed tremendously and is now only about 0.13%.

Investors have now started pricing in the Fed cutting rates in 2020 as the following chart shows. 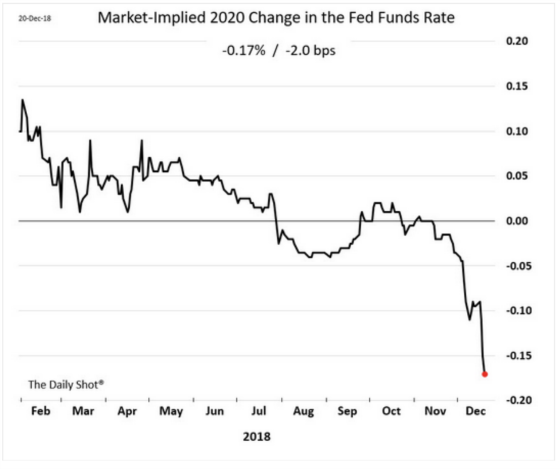 I will end the post by sharing this tweet which sums up what was perplexing me for such a long period of time but now the contradiction that I was concerned by seems to be reconciling.