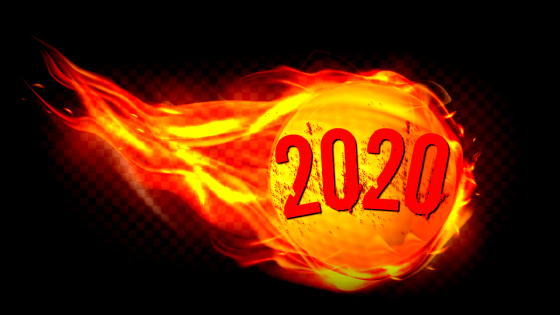 2020 has started off with some geopolitical fireworks that have carried over to financial markets as the headline below attests.

This is another good example of why having a hedge with U.S. Treasuries (and maybe a little gold as well) can be helpful to provide a counterweight to risk assets that inevitably take a mild beating, albeit usually temporarily, during these types of events. The following graph shows how 10-year Treasury yields came down quite a bit in the wake of what happened in Iraq. 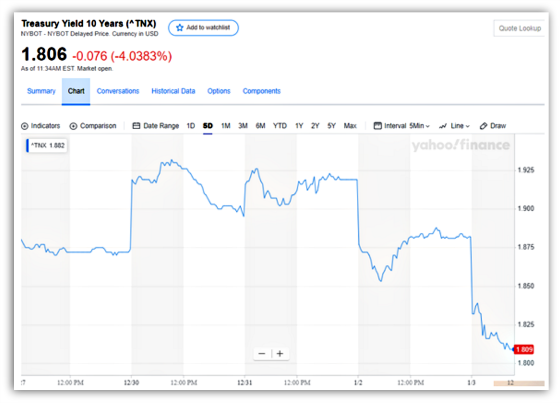 Here is a chart showing the spike in gold prices. 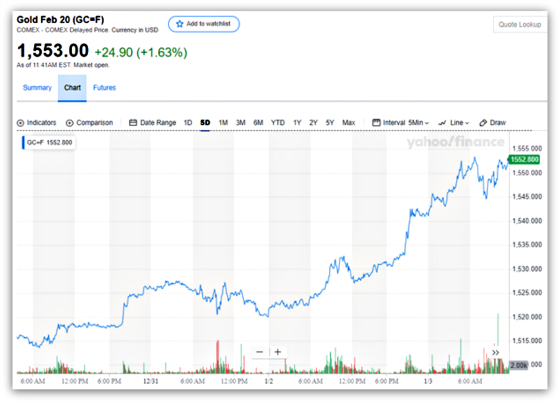 The assassination of Qassem Soleimani, the leader of the Quds Force of the Iranian Revolutionary Guard, is the event that triggered the stock market swoon and oil price spike. He was an extremely powerful man who was extraordinarily capable, methodical, committed, and humble. He spent 40 of his 62 years seeking to export the Iranian revolution throughout the Middle East by stretching the tentacles of Iran to Syria, Iraq, Lebanon (via Hezbollah), Yemen, and is a formidable enemy of Israel and the Sunni world. Here is an interesting read from General Stanley McChrystal who had Soleimani in his crosshairs and chose not to pull the trigger. For a much longer and in-depth profile, I recommend this one from the New Yorker.

Based on President Trump’s personality, previous statements, and reaction function, it was clear that he couldn’t let the attack on the American embassy in Baghdad go unpunished. Trump obviously disdains weak people and makes every effort to fight back harder and more ruthlessly if he is attacked. With that being said, however, he has been quite constrained in the Middle East as he has backed down from responding to the Iranians shooting down a U.S. drone and its attack on a major Saudi refinery. There was a lot of media chatter about the Saudis and Israelis strongly encouraging Trump to take action to show the Iranians that America can’t and won’t be pushed around after decades of kowtowing to them. And, yet, Trump refused to take the bait, especially as protests in Iran, Iraq, and Lebanon against Iranian influence or their puppet groups were growing. Things changed, however, when a rocket attack killed an American and injured others in Iraq that were orchestrated by a Shiite militia controlled by Iran, and Soleimani specifically. This led to an American reprisal which killed 25 of the Iranian proxy’s members, including its powerful leader. Iran responded by orchestrating riots and protests in Baghdad, culminating in the attack on the American embassy and the torching of part of it. The U.S. brought in more troops to defend the embassy and used helicopters to disperse the crowd.

Students of history could not help but think of President Jimmy Carter and Benghazi as this unfolded. These were two images and associations Trump had to eradicate because he hates weak people, he was extremely critical of Jimmy Carter for how he handled the Iranian hostage crisis, and Hillary Clinton for her handling of the murder of the American ambassador to Libya as the embassy in Benghazi came under attack. If he didn’t go on the attack he would be deemed equally as weak and full of hot air and no different than Carter or Clinton. By acting, however, he could not only send a message to the Iranians but also create an additional contrast between he and these prominent Democrats and draw a connection between today’s crop of Democratic candidates and Carter and Clinton and plant seeds of doubt in the minds of the electorate as to whether those running against Trump would have done what he did. You may not like Trump and his style but he will take action that his opponents won’t. At least that’s the dichotomy he’s trying to create in people’s minds.

At the same time, as previously mentioned, there’s a strong argument that Trump has been pretty measured in his response to Iranian provocation over the last year or so and made it very clear that he was not looking to escalate the situation. He generally let the Israelis do the dirty work through their 1,000+ attacks over the last five years or so against Iranian assets in Syria and more recently in Iraq. As an aside, it also sends a message to Russia to not get too cocky in its new position as the Middle East powerbroker and a force to be reckoned with. They cannot project power like the United States and this is a stark reminder to the Russians.

With the exception of oil spiking 8% after the attack on the Saudi refinery by a drone force, oil has stayed relatively stable despite all of the Israeli attacks on Iranian assets. It should also be noted that oil lost all of its gains after the refinery attack within a short period of time as the following chart shows. 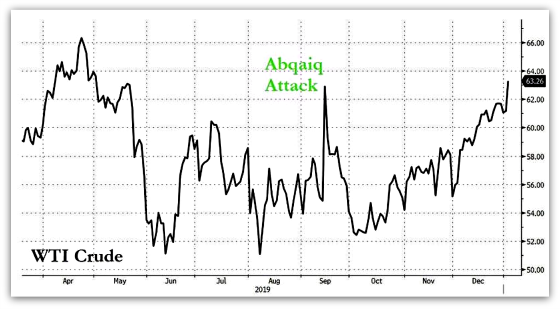 Now, however, with the head of the octopus killed in a very public and humiliating fashion, the oil markets are pricing in a higher probability of supply disruption risk. While I don’t think it’s in either party’s best interest to escalate the situation much more, one must assume that Iran will try to take action to avenge such a devastating loss and that the move in oil is quite rational. Assuming more red lines aren’t crossed I think that the U.S. response will be measured. We will obviously have to watch what goes on in the Strait of Hormuz and see if the Iranians try to disrupt oil supplies.

There’s a lot to contend with geopolitically as we enter 2020. The one counterweight might be the loosening of some tensions with China as the first phase of the trade deal is set to be signed in January and China trying to loosen up its monetary reins a bit. With that being said, however, there has been real damage to the manufacturing sector due to the trade war with China as the following headline shows. 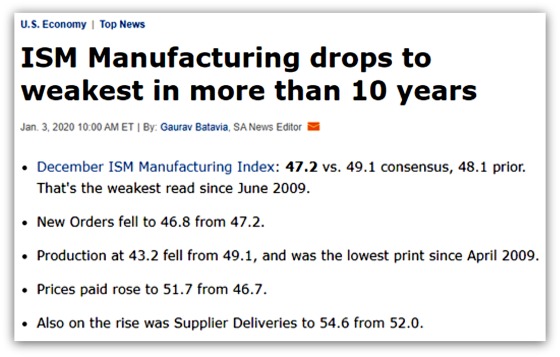 Just like I think tensions will be omnipresent in the Middle East, I also believe that we are in for a long, hot competitive battle with China as it is increasingly perceived as a greater security risk and a power that needs to be checked more aggressively. And with an election year upon us, I think that President Trump will find it in his best interest to project American strength to create a differentiator between he and his Democratic opponents.

Throw in Boris Johnson’s impressive victory and a risk of a hard Brexit, continued protests in Hong Kong, an imploding Venezuela, more nationalists gaining power in Europe, and countless other issues around the world, 2020 is not only starting off hot internationally but should continue to heat up as the year progresses. At the same time, I suspect the heat will only grow stronger domestically as well as the election battle unfolds.

It’s going to be an interesting year. And while the pendulum will probably continue to favor risk assets with the Fed being much more accommodating and it being an election year, there’s enough heat that I think having exposure to risk-off assets is quite prudent as well.