What Were Trump Voters Really Looking For? 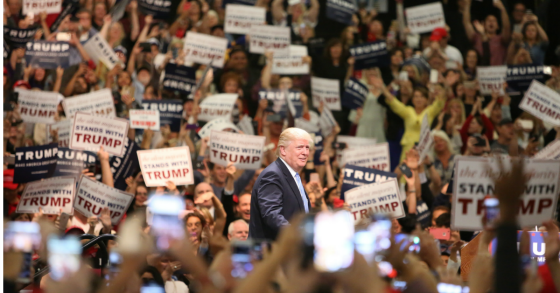 With the midterm elections kicking into high gear and political rhetoric heating up and true believers huddling in their echo chambers and cocoons, I thought it would be interesting to look at some research carried out with regard to the 2016 presidential election and some of the surprising findings.

The prevailing wisdom is that Trump won because he was representing the “forgotten man” whose income stagnated while the rich kept getting richer. He was never really a meaningful part of the economic recovery as it passed him by. In addition to stagnant wages, he didn’t participate meaningfully in the stock market recovery or home price appreciation that started to materialize in 2012. With this background, it’s not surprising that the prevailing assumption was that people voted with their pocketbooks. Like a lot of conventional wisdom, however, it doesn’t always hold up upon further scrutiny, especially given the benefit of having enough distance from the event to allow for more dispassionate research.

In a research report that was released in 2018, the author debunks the “left behind” thesis and believes that the much more accurate narrative based on the data is

“[P]erceived status threat among high-status groups as the key motivation underlying Trump support. White Americans’ declining numerical dominance in the United States together with the rising status of African Americans and American insecurity about whether the United States is still the dominant global economic superpower combined to prompt a classic defensive reaction among members of dominant groups.”

While a lot of trends may seem like they can appear out of the blue, the reality is that they usually take a while to be able to hit critical mass. From the following controversial Obama observation made in 2008, these trends were already detectable to those with sensitive antennae for picking up their signals.

Obama was caught in an uncharacteristic moment of loose language. Referring to working-class voters in old industrial towns decimated by job losses, the presidential hopeful said:

“They get bitter, they cling to guns or religion or antipathy to people who aren’t like them or anti-immigrant sentiment or anti-trade sentiment as a way to explain their frustrations.”

It took another eight years for the White House occupant to actually run on these frustrations and be able to win. Obama sensed that there was this sentiment bubbling up but he represented a very fresh face in the face of extraordinary economic turmoil for which most voters blamed the Republicans and Bush administration. He was able to win by creating the perception that Wall Street and the 1 percenters had run amok and the bull market in capitalism had to be reigned in by a new bull market in government and regulation to protect those that were exploited by the rentier class and to right the wrongs that came from the excesses of Wall Street. I think these next few charts from the Wall Street Journal summarize the excesses that took place in mortgage lending and how it went 180 degrees in the other direction and left out a lot of people from becoming homeowners. Part of the resentment being felt by Trump voters that the nation they have come to know and love and their place in it and the hierarchy they believe should exist is slipping away shows through somewhat in these charts.

Anyone that could fog a mirror could get a mortgage and then when this blew up then only the pristine elite could get one. 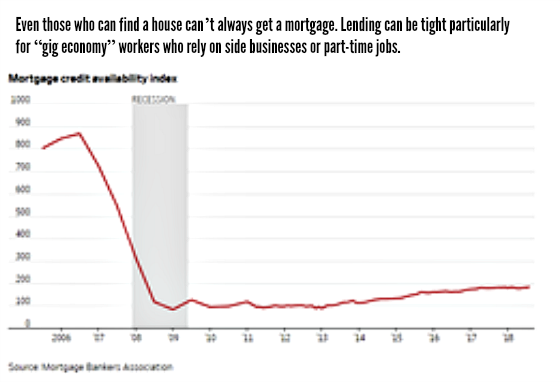 As a result, the homeownership dropped significantly (from inflated levels) and only now has started to recover. 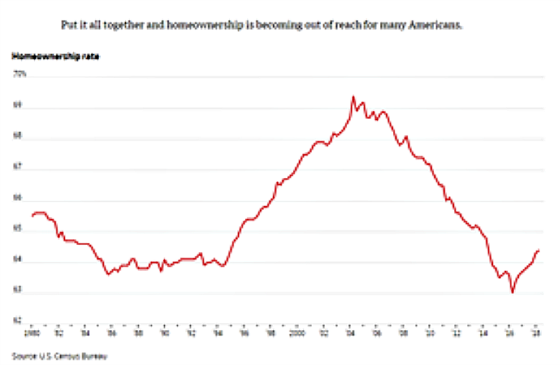 Back to the research.

Not only was the notion of voting one’s pocketbook not accurate in the 2016 presidential election, but it is generally not the case in most elections. According to the author,

“[T]hose who recently lost jobs are unlikely to blame government policy for their personal circumstances, and those who have personally suffered financially under a given administration are no more likely to vote against the incumbent. Across a wide range of issues, scholars have found that citizens seldom form policy or candidate preferences on the basis of their family’s personal economic self-interest. This is not to suggest that citizens never do so, but the conditions under which this occurs are very rare.”

One of the principal fears that Trump tapped into according to the research is that white Americans are being told they will soon be a minority race in the country. This is a symbolic representation of perceived declining power and influence. It doesn’t mean their standard of living will drop but they will no longer be a clear majority and this poses a perceived threat to their relative positioning and status. In addition, they also feel threatened by greater U.S. interdependence with the rest of the world and internalize this as U.S. global dominance coming to an end. Along with this is the perception that trade is increasingly favoring the rest of the world at the expense of the United States, particularly when it comes to China. All of these fears and perceptions have resulted in a stance that has become increasingly more anti-immigrant, an inclination to reject international trading relationships, and the belief that China is a threat to the well being of the United States.

If the “left behind” thesis were true then Hillary Clinton should have won based on economic momentum. The recovery was clearly in place, the unemployment rate had dropped significantly (as the chart below shows), and jobs were growing. And yet, behind the scenes, there was a nagging uncertainty and sense of insecurity that she didn’t get but Trump understood completely and tapped into quite effectively.

My sense is that Trump supporters believe he has their back and will continue to fight for them to help preserve or lessen the encroachments on their status by being tough on immigration, fighting hard against China via tariffs and wanting more fair trade, and doing what he can to return to their idealized view of America and its 1950s heyday when it dominated the world, was a manufacturing powerhouse, and was much more homogenized than it is today and rooted in Judeo-Christian values and culture.

All of this tells me that the explosive revelations in Bob Woodward’s new book and the op-ed by an anonymous senior administration official in the New York Times will do little to change their minds about Trump and make them feel even more hardened in their support that there is a silent coup being carried out against their savior and protector that will continue to put their idealized view of America at risk and, correspondingly, their dominant status. The more Trump is opposed by the radical and reactionary progressive forces that want to take America further from its cultural norms and roots, the harder they will fight back and support Trump. At least, that is how I see it based on the research cited in this post.

I’ll end with an example of one of my favorite biases that has applicability to this post:

People seeing what they want to see. Trump supporters (and some Fed officials) are characterizing the economy as booming but from the growth rate in jobs, I’m not sure I would agree as the following chart shows. In general, the growth rate has been on a decelerating trend from the last two years of Obama being in office through the Trump presidency. And yet this probably doesn’t matter when it comes to people’s perceptions. Those that support him believe he has their back and those that don’t believe they have targets on their backs. These are two diametrically opposed groups and I don’t see how a middle ground can be forged anytime soon in a way that is brought about through civil discourse and open-mindedness.

Fortunately, wages are starting to rise (actually they have been doing so since 2013) at a more elevated rate but not at a very rapid clip. Maybe this will change as the trend has been going in the right direction.