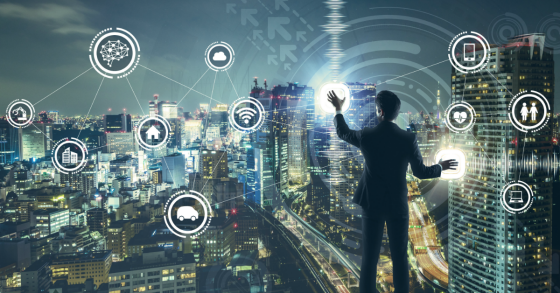 When we started to scale our apartment business in the mid to late 1990s our location decisions were based on investing in cities that would be highly appealing to knowledge-based workers. It was starting to become clear that economic growth would be driven by technological innovation deployed widely throughout U.S. and global businesses. The United States was on a continuous downtrend in terms of the percentage of economic output coming from manufacturing and that the name of the game was idea generation and monetization of those ideas, particularly in the service sector. 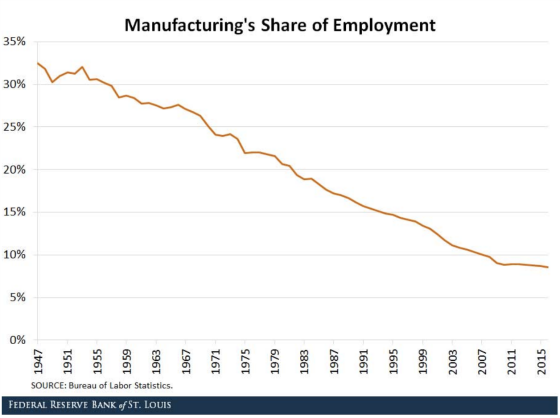 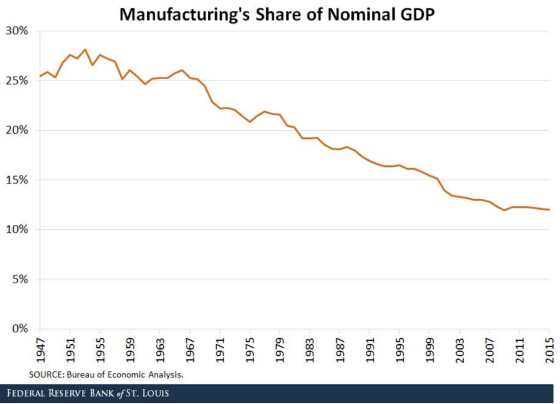 And while we paid the price early on for having deployed capital on a meaningful scale in tech-oriented cities like Austin, Raleigh-Durham, and Denver during the late 1990s and 2000 just as the NASDAQ cratered by 80% over a two year period, there was no denying that focusing on these workers would pay off in the long term. We just had to get to the long term! This was no easy feat and something I covered in some detail in my book and reiterates how important staying power is when investing in real estate.

Fast forward 20 years and our strategy has been a winning one if population and job growth are any indication (as well as investor returns). In a previous blog post, I talked about how our cities have clearly grown more rapidly than the rest of the country which I think is worthy of reviewing. And they have done so because they have vitally important characteristics that lead to powerful agglomerations of knowledge-based workers and companies to form dynamic and ever-evolving and innovating ecosystems capable of delivering valuable goods and services to the world’s businesses and consumers.

It turns out that the United States army has come to view these characteristics and capabilities as vitally important as well as its plans for a high tech fighting force needed to protect the nation in the 21st century.

Recently the army made an announcement for the location of its new headquarters for the new U.S. Army Futures Command. The stated goal is somewhat blunt and chilling:

To make Soldiers and leaders more effective and more lethal today and in the future according to General John M. Murray.

It’s better to have a clear and powerful mission than to beat around the bush through flowery language. According to an article discussing command in more detail,

After starting off reviewing 150 metropolitan areas, the search was narrowed down to five. These were Austin, Boston, Minneapolis-St. Paul, Raleigh-Durham, and Philadelphia. We were happy to see that two of the cities in which we have investments made the final list. We were even more happy that Austin was picked by the army. It has been reported that Raleigh-Durham came in second, the other market in which we are invested.

Whatever your views on military spending, there is no denying that the U.S. military has been the major catalyst for huge technological innovations that have spilled over into the civilian world. These include the internet, GPS, laser technology, sensor technology, robotics, etc. It is also the case that Israel’s position as a global technological powerhouse is a direct result of its prolific military spending focused increasingly on high tech weapons, communications, robotics, intelligence gathering systems, etc.combined with its emphasis on developing its human capital through its emphasis on education, particularly in science, engineering, and medicine. And now the army is looking to the private sector to have its technological innovations spill over to them versus what has traditionally been the other way around.

The consequences of the military of being ill-prepared while in battle and in preventing attacks and deterring adversaries are truly a matter of life and death and could also result in tremendous economic harm (e.g. 9/11) if we are successfully attacked. That is why military planners and leaders have to always be thinking creatively about what could go wrong and where are we vulnerable to align on the necessary investments to improve our capabilities and to come up with breakthrough technologies to improve our weapons systems, communications, intelligence, and fighting capabilities.

So when the army picks a location for a new Futures Command its choice is based on its needs for the future and is not impacted by economic incentives that private sector firms may be influenced by. In other words, assuming political considerations did not play a role, then its location choice should truly reflect criteria the army believes would allow it to lead an extremely effective organized and capable fighting force to address the threats that have materialized and will unfold over the 21st century.

So what were the criteria the army used to end up selecting Austin? They were very well thought out and get to the heart of where economic growth will occur in this country and the cities to which the best and the brightest will gravitate. They also happen to overlap with what we deemed to be important 20 years ago and would be even more so over time when we aligned on markets like Raleigh-Durham, Austin, Denver, Atlanta, and Seattle (and believe in even more strongly today).

According to the army, the criteria for selection included:

— Proximity to science, technology, engineering and math workers, and industries;

— Availability of cost and time assessment of civic support;

— Space and access to top-tier university science and engineering departments for collaboration on experiments, prototype concepts, and systems;

— Expandability of workspace for other services and companies to join the effort;

— Density of industry and academic talent; and

— Cost of doing business to enable both new startups and to draw established firms.

The army found that Austin had technical talent in universities and within a large base of innovating private employers and startups who were supported by research in science, technology, engineering, and medicine within a community with strong civic engagement and support. It’s one thing to have this base of talent and ecosystem to catalyze and reward innovation and it’s another to have the capacity for it to grow meaningfully over a long period of time. This is where the quality of life and competitive cost of doing business and living become extremely important to be able to continue to draw more firms and talent to the area. To quote from the article linked above:

The undersecretary said the type of urban ecosystem defined by the selection criteria is where innovation, networking, and collaboration are happening daily.

“That ecosystem cannot be duplicated from behind the walls of traditional posts and forts,” he said, adding that recognition of that concept is a radical change for the Army’s culture.

It will be fascinating to see how well the army is able to achieve its objectives in what will be a very different environment than its personnel are used to operating in. Back to quoting from the article.

Within a year, full operating capability will be achieved, he said, with a headquarters staff of about 500.

McCarthy said that doesn’t mean all 500 will be working out of a downtown office. He said that as full operating capability is achieved over the coming year, he envisions teams of soldiers and Army civilians working out of technology “incubator hubs” alongside entrepreneurs, scientists and researchers.

Perhaps in 10 years Austin will not only be known for South by Southwest, Austin City Limits, Formula One, 6th Street, The University of Texas, being the state capital, and for its innovative technology sector, but for an extremely innovative and successful technology-based public-private partnership that can help keep the country safe for the next 100 years and beyond.