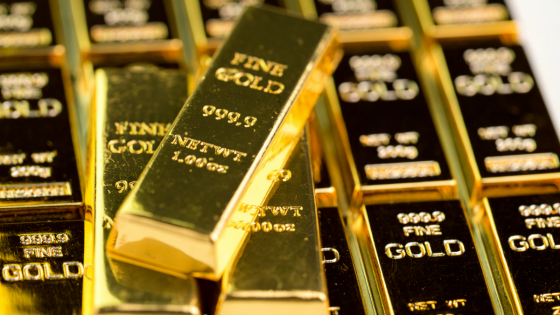 With the Chinese weakening their currency, the pound under pressure due to Brexit, and the Euro depreciating due to poor economic fundamentals and demographic trends, it seems like we’re in a phase of monetary policy in which currencies are factoring in much more significantly when it comes to interest rate policy. Gold investors are acutely aware of this as they have been bidding up the price, also spurred on by strong central bank purchases of gold, to multi-year highs as the following chart shows.

This set of circumstances and why it is favorable for gold has caught the attention of Ray Dalio as the following headline shows from CNBC.

One of the key drivers of gold price gains is the increasing prospect of more sovereign debt falling into negative interest rate territory and the higher likelihood of this spreading. PIMCO, one of the world’s largest bond managers and a firm that is known for its sophisticated thinking, has recently come out with a piece from one of its strategists talking about the real possibility of negative interest rates in the United States. Globally, there are now bonds worth in excess of $15 trillion penetrating at negative interest rates as the following chart shows. 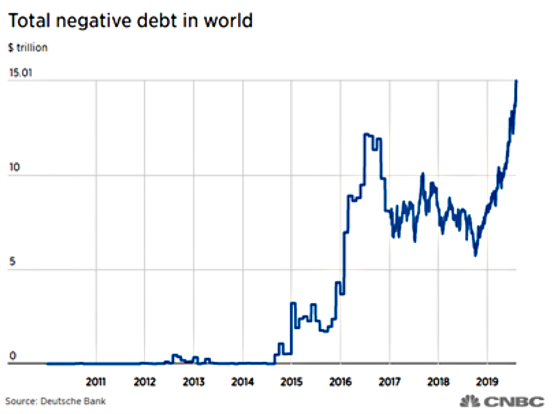 The entire German yield curve is now negative as this table from Bloomberg depicts as of last week.

PIMCO’s Joachim Fels states the following in his most recent blog:

What was once viewed as a short-term aberration – that creditors are paying debtors for taking their money – has already become commonplace in developed markets outside of the U.S. Whenever the world economy next goes into hibernation, U.S. Treasuries – which many investors view as the ultimate “safe haven” apart from gold – may be no exception to the negative yield phenomenon. And if trade tensions keep escalating, bond markets may move in that direction faster than many investors think.

Fels believes that demographics and technology are two key drivers behind negative rates in Europe and Japan and the prospect for them in the United States. Longer life expectancy is increasing the demand for savings while less investment is needed because new technologies are capital-saving and cheaper.

With people living longer in affluent countries, the focus is more on saving and more modest consumption so that retirees do not outlive their capital. This increases the supply of savings and the demand for safe places to invest those dollars which serves to push the rate of interest down holding everything else constant.

Fels also cites some cyclical factors that may hasten the onset of negative interest rates in the United States. One is a slowing labor market in which job growth has decelerated as well as labor hours. This should serve to slow consumption growth and increase the desire of workers to save more money. Additional tariffs, scheduled to be imposed on September 1st, that will impact $300 billion of goods coming from China and will hit the consumers’ pocketbook, will not be a confidence builder and should also serve to increase the demand for savings.

Then there is Federal Reserve policy which is in a bit of a negative feedback loop due to its caveat that it wouldn’t lower rates or need to lower rates unless global economic conditions deteriorate as a result of global trade frictions. And as I wrote about last week, President Trump jumped on that by announcing additional tariffs on Chinese goods and thereby escalating the trade war and increasing the odds of an economic slowdown or contraction. This has resulted in a significant drop in interest rates and a flattening and a partial inversion of the yield curve.

The rest of the developed world, particularly Europe and Japan, is growing more slowly than the United States and is home to most of the world’s negative-yielding sovereign debt. This is putting pressure on the US dollar which President Trump is not happy about as it hurts our trade competitiveness and feeds into his belief that other countries are not playing fairly when it comes to their currencies. As a result, he believes we have to level the playing field by pressuring the Fed to lower rates aggressively and to weaken the dollar. Although he’s been a little less overt about wanting to weaken the dollar he does believe the Fed could help the dollar out by cutting rates and weakening the currency a bit to help manufacturers.

This confluence of events has helped elevate gold prices and have investors park their money in the safe haven of Treasuries. I think these trends may be here to stay for a while although one could argue gold is overbought and has too much investor euphoria associated with it in the short run. Treasuries don’t appear to have as much investor enthusiasm as gold. The following charts show the difference in investor enthusiasm. 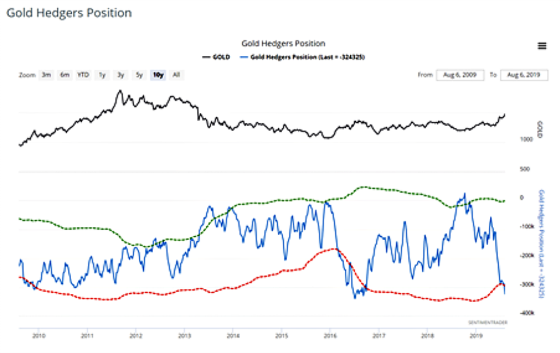 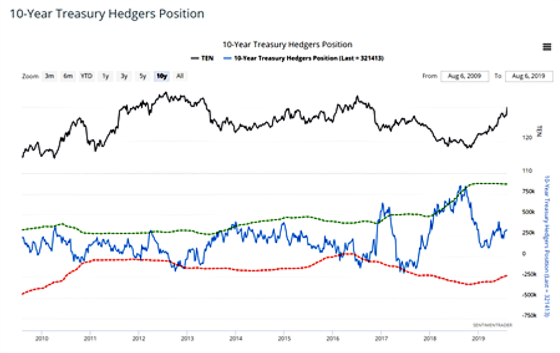 It does appear that we are shifting to an era in which currency valuations take on even greater importance in a more nationalistic world in which trade is increasingly viewed in more zero-sum terms. This is the ideal environment for that barbarous relic of gold to shine.