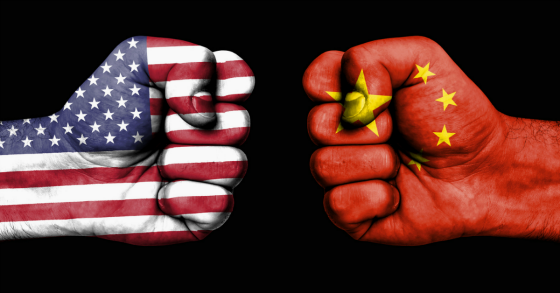 In some ways, I can understand investors looking through the threat of tariffs on multiple fronts by President Trump as just his standard negotiating tactic to strike a better deal. Despite very derogatory statements directed towards our strong allies and trading partners of Canada, Mexico, and the European Union, we have reached an agreement with Canada and Mexico and agreed to stand down with the E.U. for the time being. China, on the other hand, appears to be a very different story.

Trump and his team appear to have a real disdain for China and see it as the primary source of the hollowing out of U.S. manufacturing over the last 30 years. Perhaps he has a point as one can see that manufacturing employment in the United States peaked around 1978, Deng Xiaoping opened up China to foreign trade on January 1, 1979. The story is much more complicated than this but let’s not let complexity get in the way of a good versus evil story that has many political benefits.

Trump seems hell-bent on boxing in China from various fronts. I, like most people, initially thought that the tariffs we were levying on China were just a negotiating tactic to get China to open up its economy to more U.S. goods and to provide more safeguards to our intellectual property. China would make some concessions and we would both back off from implementing the tariffs. I was wrong and now see that, upon further reflection, I was looking at it incorrectly. The ultimate objective is not to open up China to more U.S. goods but to box China in to curb its influence and to prioritize national security concerns over the interests of business and investors in the short to medium term.

So why do I now think this? When the implementation of tariffs is combined with activities on the military front it now appears that the U.S. is focused on containment versus opening markets. During the cold war with the Soviet Union, the United States pursued a two-tier policy. The first was to contain the Soviet Union and its influence on Eastern Europe and to check its influence by aggressively building up our military capabilities and those of our allies and to open up the United States economy to allow Western Europe and emerging markets to feed off of our system to march down the path to capitalism, democracy, and liberalism and away from socialism, communism, and totalitarianism. It’s hard to argue with the results as the Warsaw Pact came apart, much of Eastern Europe is now more firmly in the camp of the west, the Soviet Union imploded and what remains behind in Russia is far smaller, with an economy that remains highly dependent on energy, a tremendous amount of economic concentration in the hands of Putin’s cronies, a one person power structure, and terrible demographics.

Our relationship with China seems to be pivoting to a more adversarial one that is based on the premise that having created global supply chains, especially with China as the manufacturing hub, has been a “bad deal” for the United States and that we should break some of those links and bring manufacturing back home and if it comes with some short-term pain so be it. In addition, we have been too weak in letting China expand its economic influence and now its military power as it has claimed hegemony in the South China Sea when there is almost full global agreement that they have no legal right to do so.

I kept wondering why we were not willing to have more of a negotiating mindset with China over tariffs. The stock market seemed to think it would be ok. But as time went by I was also thinking the market was missing that a lot of the economic growth, in addition to some of the temporary effects of the tax law changes, could be coming from businesses accelerating their orders from China ahead of the implementation of tariffs and once they were put in place we would see some reversal. The data seems to be pointing this out and it’s now hitting corporate earnings which the stock market is finally starting to price in.

The following shows that tariffs are now a clear and present danger and one that is sure to grow and probably one of the reasons the market has been experiencing a pretty sharp correction and deteriorating fundamentals and a larger percentage of stocks are hitting new 52 week lows.

The following charts show how capital spending and manufacturing are either contracting somewhat or growing more slowly. One can see that new orders for capital goods excluding the volatile defense and aircraft components have weakened and this is spilling over into the value of shipments and overall manufacturing activity. Add to this a weakening housing market, one can see some of the reasons for the big stock market correction and long-term interest rates coming off their recent highs. 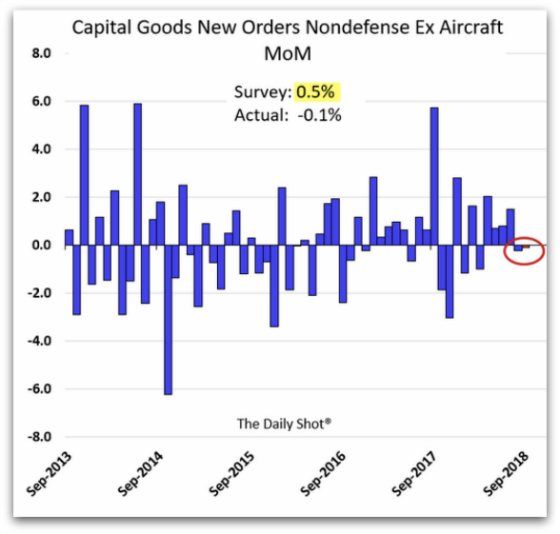 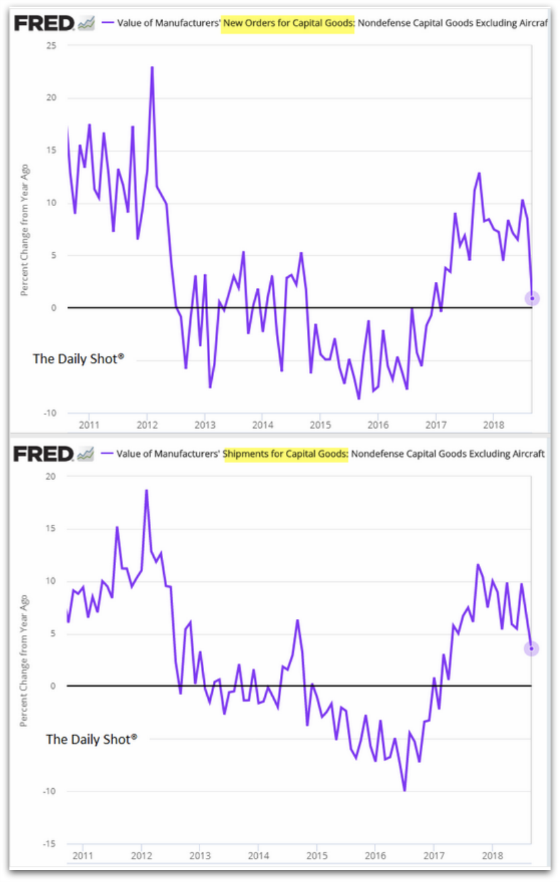 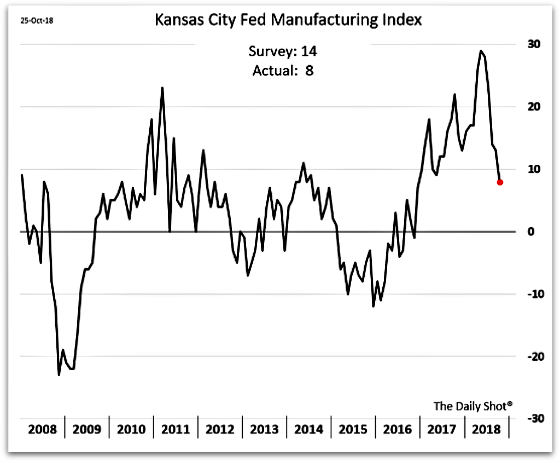 Back to China. I think this is going to be a much bigger situation and factor in terms of geopolitical tensions continuing to build up and the global economy being impacted by our more hardline approach to the country.

I say this based on a recent opinion piece I read in the Wall Street Journal  with the following title:

I was influenced enough by what I read to now see our actions and relationship with China through this new prism. Pence hit very hard at China by denouncing its human rights violation through its suppression of the Tibetans and Ughurs as well as its “Made in China 2025” plan to dominate tech and using its willingness to extend loans through “debt diplomacy” via its Belt and Road initiative. I will quote from the opinion piece for some other key points, observations, and analysis.

In the same week as the vice president’s speech, Navy plans for greatly intensified patrols in and around Chinese-claimed waters in the South China Sea were leaked to the press. Moreover, the recently-entered trilateral U.S.-Mexico-Canada trade agreement was revealed to have a clause discouraging trade agreements between member countries and China. The administration indicated it would seek similar clauses in other trade agreements. Also last week, Congress approved the Build Act, a $60 billion development-financing program designed to counter China’s Belt and Road strategy in Africa and Asia. Finally, the White House issued a report highlighting the danger that foreign-based supply chains pose to U.S. military capabilities in the event they are cut off during a conflict.

China is not going to just take what the United States does without responding to it. It’s too large, powerful, and has too much pride and a painful history of foreign powers trying to control and isolate it to not respond. This will create geopolitical tensions. Back to the opinion piece (bold is my emphasis)

Anyone of these steps would have rated banner headlines in normal times; in the Age of Trump, all of them together barely registered. But this is a major shift in American foreign policy. As China responds, and as other countries formulate their approaches to the emerging U.S.-China rivalry, a new international reality will take shape. With many longtime U.S. allies opposed to the Trump administration on trade policy and other matters, and with Russia, North Korea, and Iran all looking to frustrate U.S. goals, an indignant China looking for opportunities to make Washington pay may find help.

Finally, from an investor perspective, this last citation gets to the heart of what I have been trying to convey in this post. We should not assume business as usual and that tariffs and disruption of the global supply chain could be the new reality for businesses and investors to contend with as the Trump administration prioritizes national security even if it comes with economic tensions.

Business and investors may still be underestimating both the Trump administration’s determination to challenge China and the amount of economic disruption that greater U.S.-China tension can bring. To the mix of longtime China hawks and trade hawks now driving U.S. policy, national security matters more than economic friction, and many of the protestations from the U.S. business community may fall on deaf ears. Both China and the U.S. are likely to move quickly, unpredictably and disruptively as they struggle for advantage; Wall Street should brace itself for further shocks.

Finally, the U.S. just announced that we were pulling out of a nuclear arms treaty with Russia. This has nothing to do with Russia and everything to do with China as we felt like we were being put at a great disadvantage by the treaty as it limited our ability to develop and deploy intermediate-range nuclear missiles while China was under no such constraint. 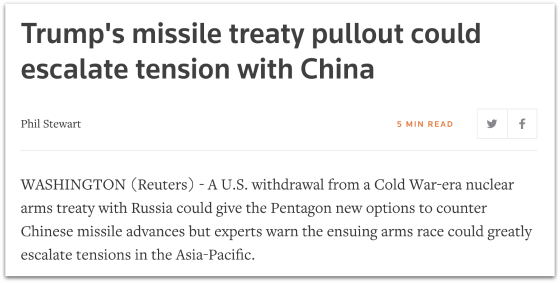 This will undoubtedly add to the potential for greater tensions with China and more geopolitical risks for investors to consider. With national security trumping (pun intended) the interests of the business community when it comes to China, investors are now being put on notice to factor this into their planning and investors should take note.