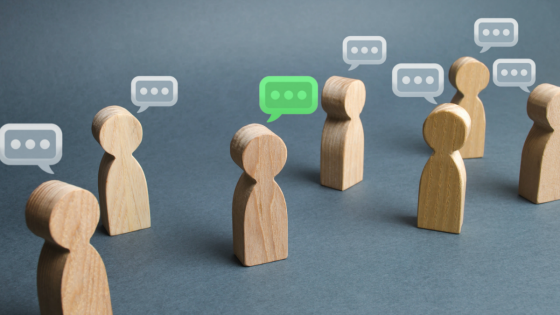 This is one of those weeks where I don’t have anything pressing I feel I need to convey or work through to gain clarity so I thought I would share some random thoughts related to the coronavirus, surveying data, economic reports, and a health tip.

The outbreak of the coronavirus stimulated my curiosity in learning more about the Spanish Flu pandemic of 1918-19. It’s estimated that 500 million people, one-third of the world’s population, became infected by the virus and at least 50 million people died around the world, including 675,000 in the United States. The impact was so great that it caused the average life expectancy for both men and women in the United States to drop by 12 years as the average age of those who died during the pandemic was 28. Usually, the flu is most dangerous for the very young and old. With the Spanish Flu, however, this was not the case as it struck healthy young adults the hardest.

There are two cruise ships being quarantined off the coast of Japan. One has a number of passengers infected with the virus while the second is suspected of having passengers and/or crew infected. I bring this up because the second boat is Holland America’s Westerdam. We were on this boat in 2004 doing a cruise of the Mediterranean. It was a new ship at the time.

Here is a picture from the boat. My how time flies. 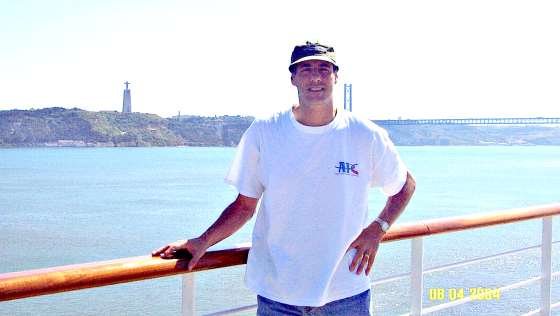 For what it’s worth, on our last cruise to Africa and Asia there was some kind of outbreak of a virus on the ship and some people had to be quarantined and the crew took extraordinary measures to ensure that cleanliness and hygiene were at the highest standards. I can only imagine what is happening on the boats off of Japan as their situation is far worse than ours.

We ended the cruise in Athens just prior to the 2004 Olympics starting. Jacob and Ariella were very happy to be there during this time. And Roneet was beaming with her kids in the second picture. 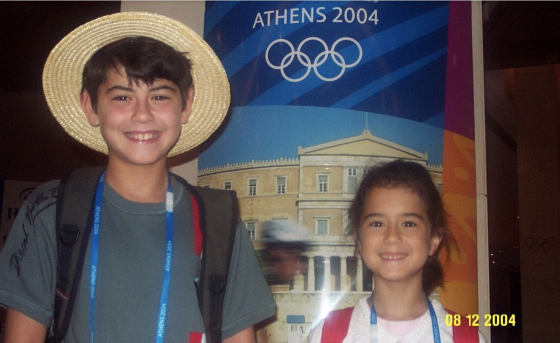 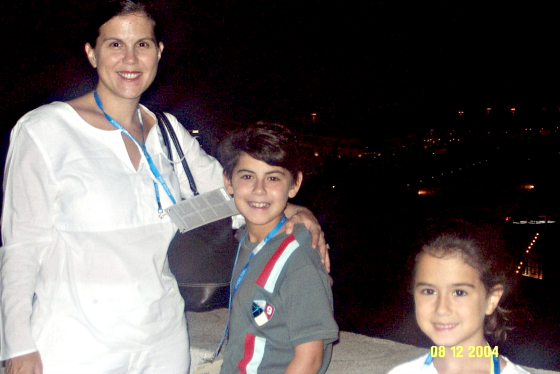 Roneet was never a big fan of me photographing her without her preparing for it but I got so much pleasure from her reactions. This one is priceless. You can see the annoyance and exasperation in her face.

I love this photo of us overlooking Athens. I am one lucky man to have had such wonderful experiences with her and our kids. Despite her annoyance and protestations, I am so glad I took so many pictures of her because they trigger wonderful memories. 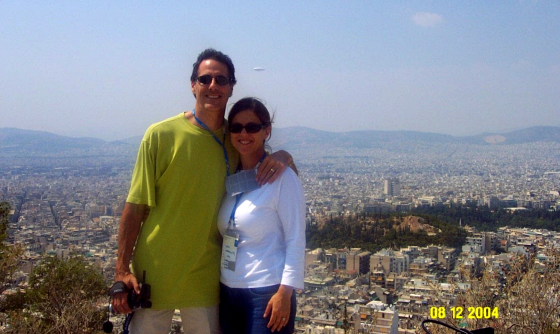 Now, from my satisfaction to others. This headline caught my attention.

According to Gallup, a record 90% of Americans are satisfied with their personal lives. The survey has been done since 1979 and the following graph shows how satisfaction has ebbed and flowed over these 41 years. 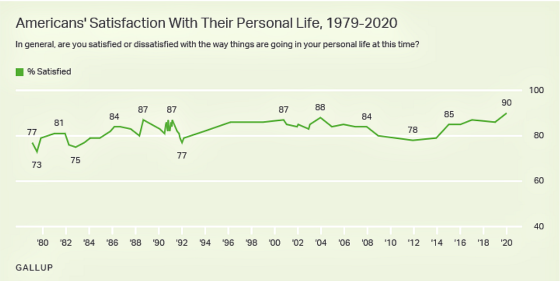 And while virtually all categories of people are either satisfied or very satisfied with their lives, those most satisfied are doing well financially, Republican, married men, well educated, and white. 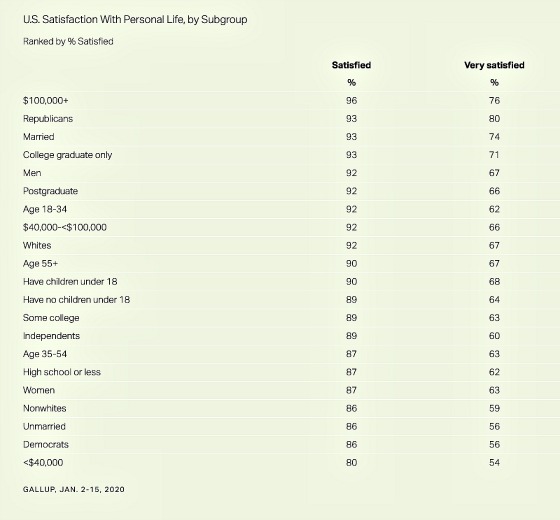 Not surprisingly, confidence in the economy has risen which has helped influence people’s personal satisfaction. 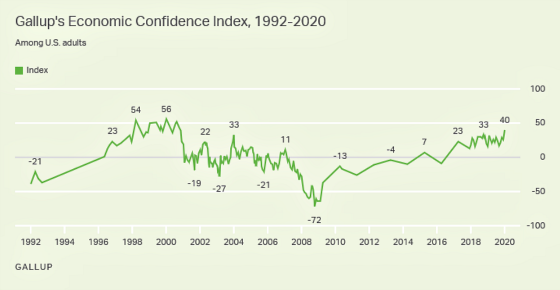 People have downgraded economic issues as the most important problem facing the United States to the lowest since the survey started in 2001. 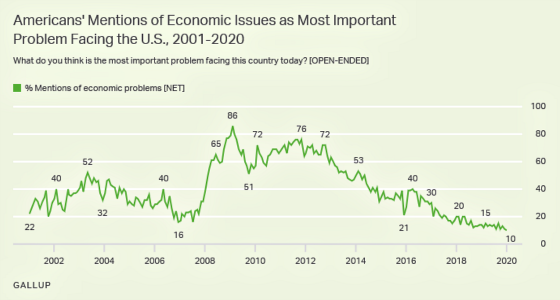 The February jobs report seemed to corroborate this economic optimism as it was stronger than projected.

Despite this, Treasuries rallied with yields dropping by five basis points. 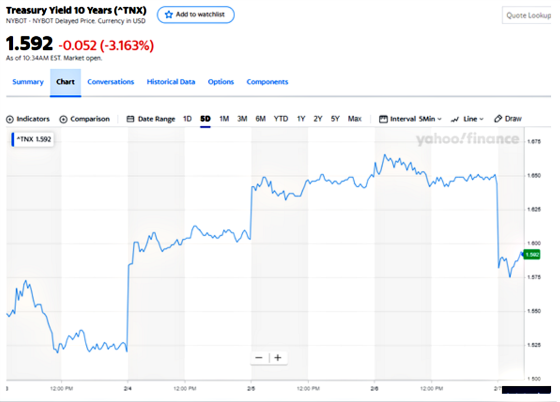 Perhaps bond investors were impacted by the revisions to past numbers showing that job growth wasn’t as strong as previously reported as the following graph shows. 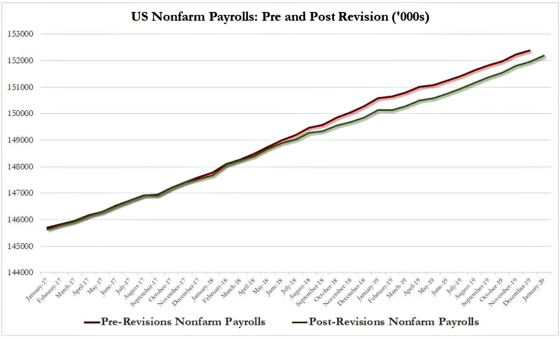 Or investors are seeing through this report to slower times ahead as the coronavirus stifles China’s economic growth as an incredible number of people are on lockdown. 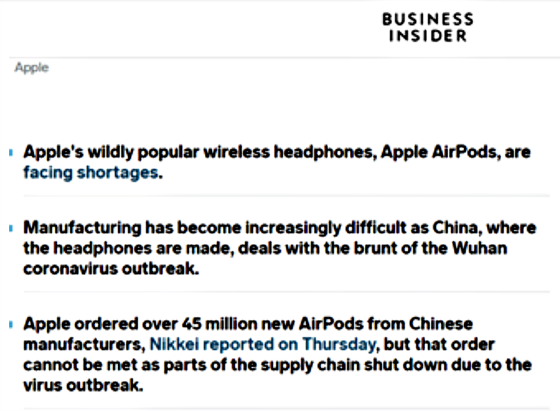 The economic engine of Europe, Germany, is very weak right now so this may be impacting investors’ outlook for economic growth over the next couple of quarters.

I will end with an addition to my health focus of cold showers, training twice a week, and tennis. Push-ups. More specifically, being able to do 41+ push-ups each time. The motivation for this is from the following study.

Researchers from the Harvard T.H. Chan School of Public health say their report is the first to show how push-up capacity is linked to heart disease. They found that middle-aged men who can log more than 40 push-ups in a single try have a 96% reduced risk of developing the potentially deadly condition and other related ailments, such as heart failure, compared to those who can complete no more than 10 push-ups.