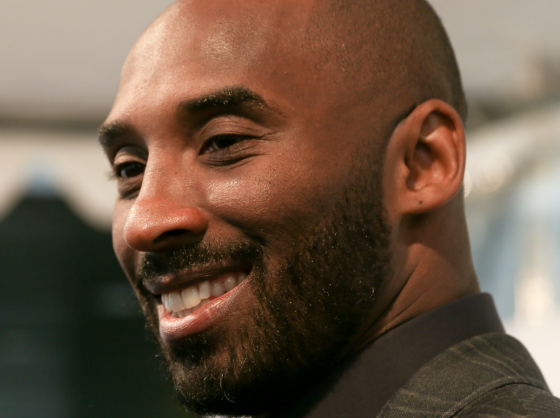 I want to start off by expressing my deepest condolences to the families of the nine victims of the devastating helicopter crash that took the lives of Kobe Bryant and his daughter Gianna.

I imagine that the death of Kobe will be one of those events in life that we will always remember where we were when we heard the news. There was the JFK assassination, the death of Princess Diana, and now Kobe Bryant, along with his daughter Gianna and seven others who died so tragically in the helicopter accident. The death of Kobe Bryant was extremely impactful. Even though I had experience with the unexpected and untimely passing of Roneet. I was still in a state of shock, like millions of others. My family and I, unfortunately, have some ability to relate to what Vanessa and her kids have just experienced, but it still rocked me. It’s somewhat akin to people from Florida saying to me that they could never imagine being in an earthquake and that they would much rather deal with their hurricanes while I’m thinking the opposite. We know what we know and can relate to our experiences and even though others may have similar experiences, they are still not the same. We fear what we haven’t experienced and can relate to what we have experienced. Vanessa’s loss is not the same as what happened to Roneet but both were shocking and terribly painful and I still wonder how she is handling it even though I have had to manage through something of a similar nature. Enough about me.

Because he lived in Newport Beach, where CWS’s office has been for over 30 years, his loss is even more devastating because of his ties to the community. And when expanded to Los Angeles and the rest of the world, it’s really impossible to overstate how impactful it is. As an aside, I highly recommend watching this interview with Derek Fisher about his relationship with Kobe. It’s moving, powerful, and extremely insightful.

It seems to me that the last few days of Kobe’s life were very representative of how he was living his life so intentionally. He was seen at Fashion Island, the outdoor mall right by our office, with his three-year-old daughter. He was communicating with Lebron James, who had just passed him on the all-time scoring list, and he was very happy for him. He had communicated with Carmelo Anthony that he was going to be at the Laker game when Portland was coming to town so he could see him play. And of course, he was going with Gigi and some of her teammates and parents to a basketball game at a center he founded and I’m sure was a major financial contributor and supporter. He was also becoming very prolific in terms of his creative output vis-à-vis animation, children’s books, analysis of basketball, etc. 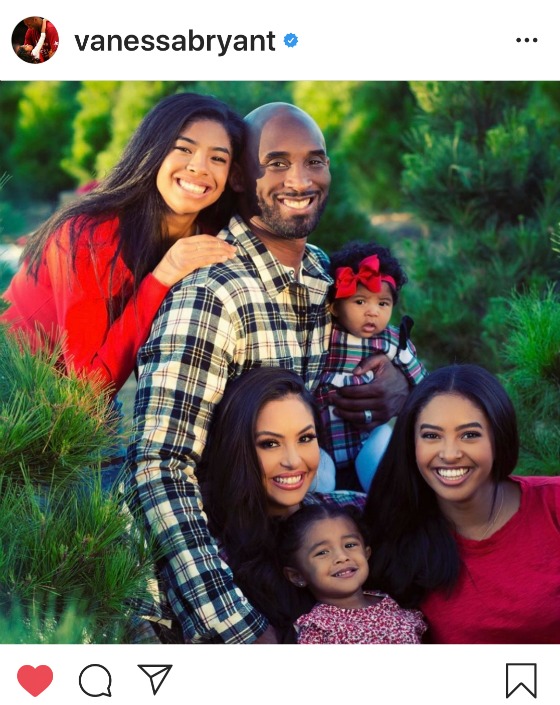 Vanessa has been very low-key in terms of a public presence during Kobe’s career. She has focused on being a great mother and a supportive wife. The question, of course, is how will she cope with the devastating loss of her husband and extraordinary daughter who was clearly on a path to becoming a superstar basketball player. She had already received a scholarship offer at 13 from the best college basketball program in the country for women’s basketball, The University of Connecticut. And if you see videos of her and her devastating turnaround fadeaway jumper, that was just like her dad’s, you just knew she was destined for greatness. She worked at it, earned it, and Kobe was not about giving her the answers or telling her knowing exactly how to do things or to cover for her. On the contrary, he saw his job as teaching her the importance of commitment, consistency, hard work, practice, continuous learning, and dedication to your craft, and that if you make those investments, then they will pay off due to the compounding effect over time leading you to significantly outperform the competition.

And now back to Vanessa. After reading about her my sense is that she’s going to be a force to be reckoned with. It only took me one thing to read to know what a special woman she is. She was a Spartan wife and I mean that with the greatest compliment since I was married to one myself. Legend has it that a Spartan wife demanded that her Spartan husband come back with the enemy’s head on a platter. Yes, I know that sounds harsh, but after I read this excerpt from a forthcoming article about her in New York magazine I got chills. And I can see why she and Kobe made an extraordinary couple in partnership. This is what Vanessa said about her expectations of her husband. 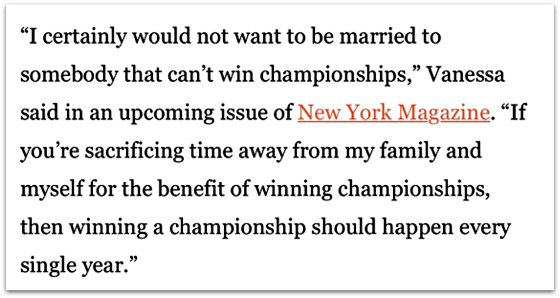 I know they went through some really difficult times and I can only imagine the pain that Vanessa experienced while Kobe was dealing with his legal issues and self-centered choices he made. With that being said, out of the hottest fire, the strongest steel is formed. It was pretty clear that Kobe was dedicated to becoming an extraordinary father and a deeply committed husband. He loved being the father of girls and he declared himself a “girl dad” and said he would have loved to have five more girls. He was seen in the community as a very active and involved father and husband and he didn’t shield himself with security detail or highfalutin friends. He was just one of the people in the community who happened to be extraordinary.

The above excerpt from the article about Vanessa, along with what she said in the aftermath of the passing of her husband and daughter, have led me to believe that she has the mindset to process this in a way that will leave the world a little better off because of what she will do with the loss. That’s not to say that the passing of Kobe isn’t a huge loss for the world at large. My point is that with the hand that was dealt her she’s going to play it as best as she can and that’s where the power of mindset comes in. That is the only way to deal with something so devastating. One has to adopt a powerful mindset of hope, growth, and recovery in order to turn a devastating loss into a form of fertilizer that will help catalyze growth in other areas. So I’ll be watching Vanessa keenly to see how she leaves her mark on the world.

We know that Lebron James said that he’s got to carry the Laker’s legacy on his back. That’s his responsibility now. We know that Shaq is extremely devastated and very upset about some of the choices he’s made in life as he has reflected on his life with the recent passing of his sister and now the loss of Kobe and he says that he is a guy that has had a lot of grudges and that’s not how he wants to live his life anymore. He has committed to reaching out to those people that he’s had issues with to tell them he loves them. Kobe has done in his death what he did in his life. He brought huge numbers of people together. Of course, he had his detractors who were basketball fans of other teams that didn’t like him. Despite this, there was no question that everyone respected him. There was no denying that he had an extraordinary work ethic, he was extremely bright, deeply curious, and a model for mastery. The outpouring of emotion from superstars, owners, and fans is a testament to his special qualities. He was one in many millions. 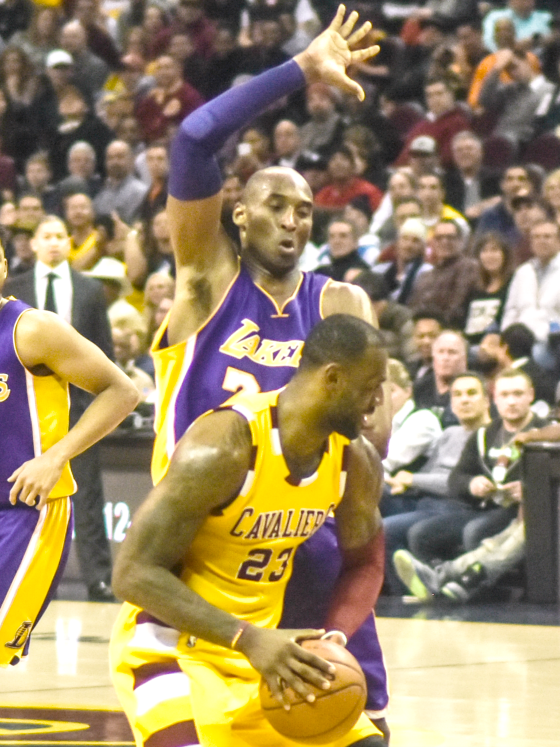 Many people complain that athletes are significantly overpaid, especially when compared to firefighters, policemen, and teachers. There is definitely a moral argument to be made for this. From an economic standpoint, however, how many people can draw thousands of paying people into one place to watch them perform and upon their death require a memorial service that may need to be at the LA Coliseum, which holds approximately 100,000 people in order to accommodate those who want to honor his life in the wake of his passing?. An infinitesimally small number of people have that drawing power and that is why they get paid the way they do. They can draw people together who are willing to pay and part with their hard-earned money in ways that very few other people can. Kobe’s death is a testament to his mark on life.

Rest in peace Kobe (as well as to the eight other people who perished).