I Won't Back Down - Powell and Yellen versus Wall Street 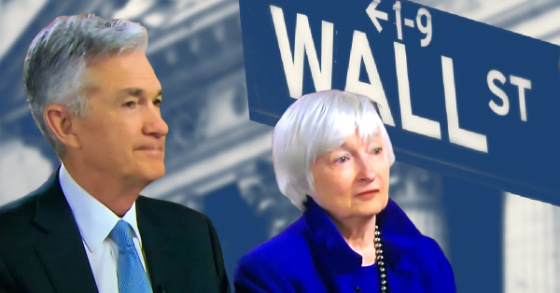 Well, I won’t back down

No, I won’t back down

You can stand me up at the gates of hell

But I won’t back down

No, I’ll stand my ground

Won’t be turned around

And I’ll keep this world from draggin’ me down

I hope that my recovery from heart surgery follows the same trajectory as long-term interest rates. This chart shows how 10-year Treasury yields have gone up about 0.50% since the beginning of February, which is quite a move, especially from such low levels. Rates are also about 0.40% higher than a year ago. 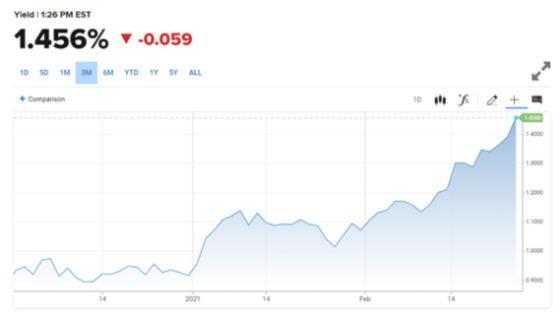 Bonds were massacred on 2/25/21 with a terrible 7-year auction. Until that point, most of the move in bond yields was based on the belief that inflation would be higher in the future. This pushed down inflation-adjusted interest rates (real rates) deeper into negative territory. On the 25th, however, there was a significant move higher in real rates, signifying investors were pricing in faster economic growth and wanting more compensation for this since returns in the economy should presumably be higher. The following chart shows how real rates spiked. 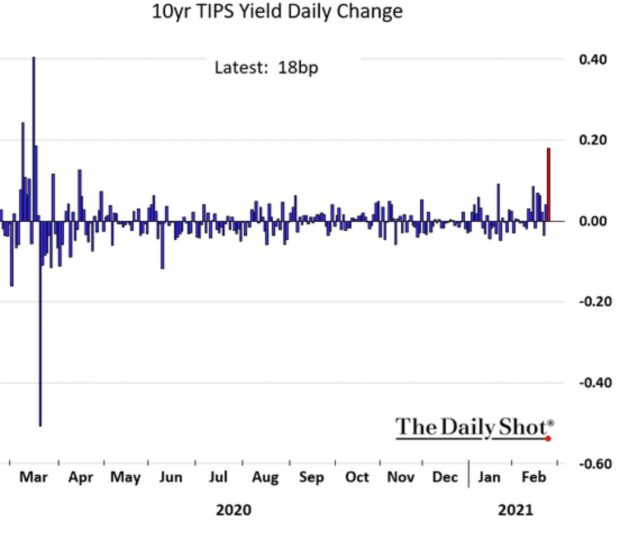 In spite of this, however, if you look at a longer-term chart of real rates, one can see that they are still quite negative, but not without precedent as we reached similar levels in 2013.

There has understandably been a lot of concern about inflation accelerating materially. Household income exploded higher in January fueled by $900 billion of stimulus checks.

Americans are now sitting on $3.9 trillion in cash, up from $1.4 trillion in February 2020. And this is before the next round of stimulus checks.

The argument for more inflation is compelling given the amount of stimulus ahead, the built-up savings, bottlenecks in the supply chain system, vaccines proving themselves to be very effective and becoming more available, and big pent-up demand for leisure, travel, and entertainment. Despite this, the market seems to be pricing in higher inflation as more of a short to medium-term issue versus a longer one as the following chart shows. In fact, long-term inflation expectations have come down a bit. 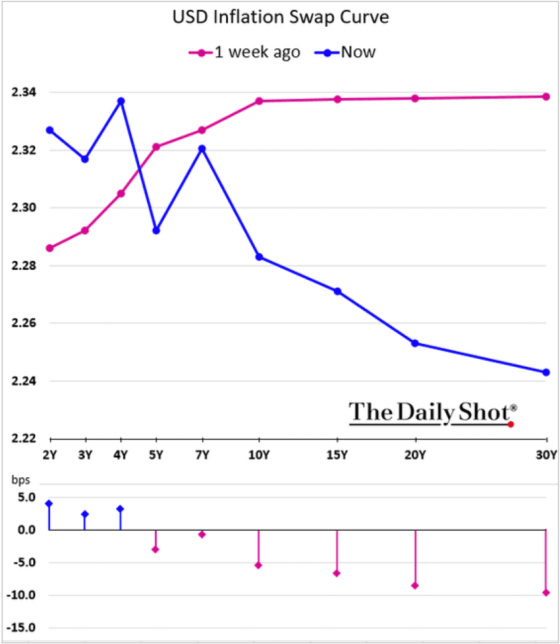 The market, as of now, is pricing in future inflation (inflation five years ahead, five years from now) at essentially where it was pre-pandemic. In fact, it looks like it’s rolling over a bit and is now below 2% at 1.94% as the following chart shows.

Emergency measures were put in place by the Fed when we were on the verge of a deflationary spiral. The system was at great risk of collapsing without the Fed aggressively loosening monetary policy and the federal government following up with fiscal stimulus. Once Armageddon was taken off of the table then it would be only a matter of time before inflation expectations got back to where they were as economic growth re-materialized.

It will be interesting to see what happens to housing demand with rates moving up. Housing has been a huge beneficiary from lower interest rates and Covid preference shifts. If it slows down after this rate pop then it will show how sensitive the economy is to higher rates and will tell me that long-term rates may be closer to a cyclical high versus low.

There is no question that inflation seems to be more of a material risk in the medium term but I think that has more to do with supply chain issues than a robust economy. My big assumption is that bottlenecks will get resolved as demand shifts to other industries that have been decimated by Covid. I also continue to believe that the aging of the industrialized world, combined with huge amounts of debt outstanding, is still the most important factors that will continue to keep rates on the low side. In spite of these longer-term inflation and interest rate anchors, it’s going to be a gut-wrenching ride at times, especially if last week’s Treasury auction is any indication, as it was one of the worst in a very long time.

It does appear that the Treasury sell-off is probably overdone. One indication is that it is much more enticing for Japanese investors to purchase Treasuries and hedge their currency exposure than it’s been in a while. 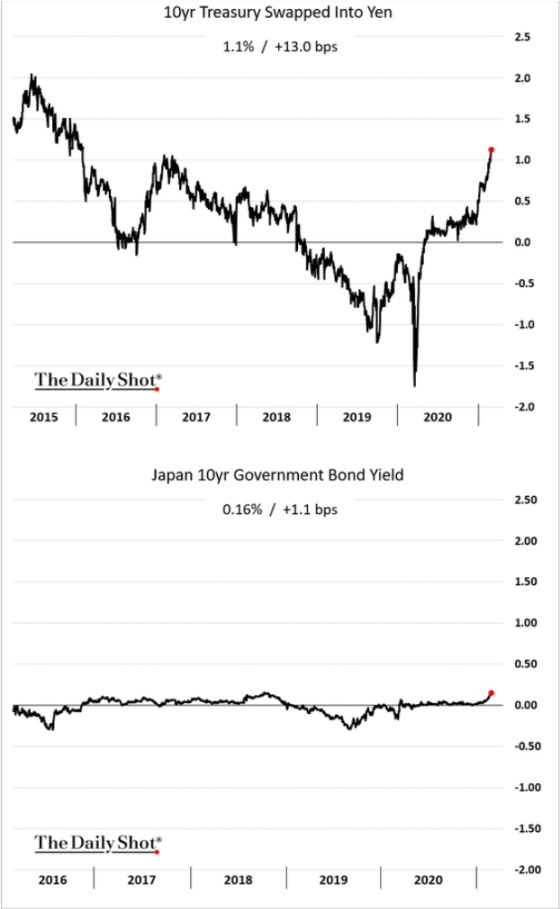 Losses incurred by 20+ year Treasury investors are approaching levels where they tend to represent a bottom. Of course, more losses could incur via higher rates, but this chart would indicate that the bulk of the pain has been inflicted. 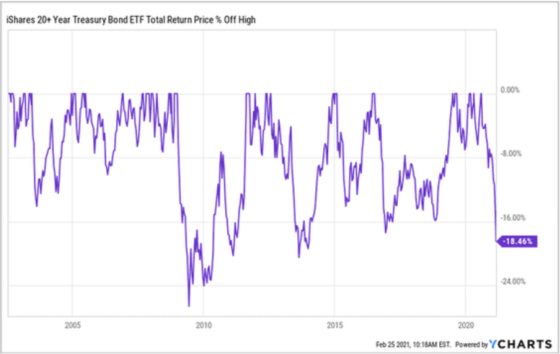 I think it’s also encouraging that after reaching a high of 1.61%, 10-year yields came down quite a bit to a level below the psychologically important 1.50%.

Finally, in some ways, the spike in yields should not be terribly surprising if the Citibank Economic Surprise Index is any indication. As one can see from the table below, economic surprises were in record-high territory recently which showed that economic activity was far stronger than what was being forecasted. The index is still in positive territory but, if history is any guide, then expectations are probably too high and it will reverse into negative territory which would make it hard for rates to increase materially. 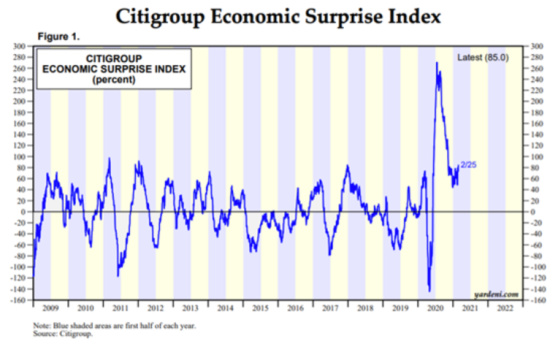 Right now the market is pricing in rate hikes taking place earlier than what the Fed has stated publicly. The Fed is on record as declaring that they will be holding rates at essentially 0% through 2023 while the market is now saying the Fed will have to blink nine months earlier. Let the games begin. 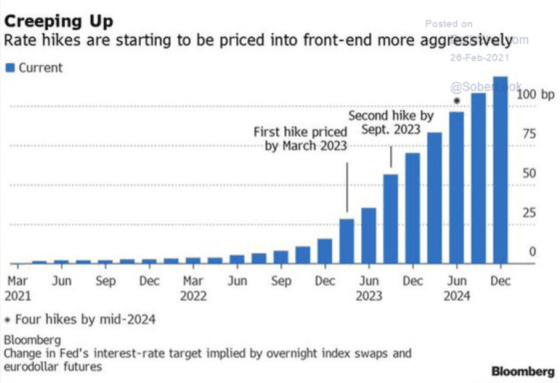 Both Jay Powell and Janet Yellen have said over and over that having 10 million more people unemployed or underemployed as a result of Covid is unacceptable and this is the most important variable in terms of adjusting economic policy levers. Right now I’m taking them at their word. I believe the Fed is happy to see some of the speculative excess taken out of the system and is hyper-focused on getting those 10 million people back to work who either lost their jobs due to Covid or are underemployed. I don’t think they mind markets going a little haywire due to higher rates, especially if it stings the wealthy a bit. If the market carnage spills over into the real economy, however, via tighter lending standards and higher credit spreads and less consumer spending and job growth, then I think they’re going to focus on capping interest rates. I believe the Fed is prepared to cap longer-term interest rates if necessary to achieve its employment objective. And if it means that inflation runs hot for a period of time so be it, since it’s run cool for many years until this point and they are now more focused on the average inflation rate over a long period of time versus where it is at any point in time.

I’m convinced that Jay Powell and Janet Yellen are focused almost solely on Main Street and recovering millions of lost jobs while Wall Street is worried about inflation. This will be a titanic battle but I think that Wall Street is a little too paranoid and Powell and Yellen are going to stand their ground and interest rates will be capped as necessary and the dollar will not strengthen more than it needs to. I don’t see Powell and Yellen backing down.