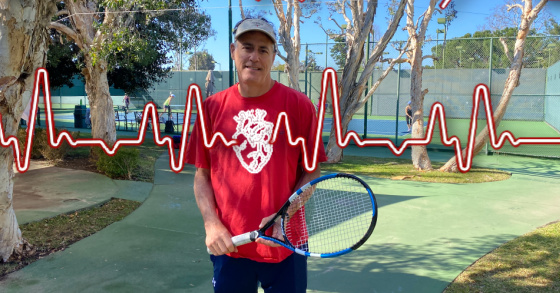 This blog post was written earlier than usual. If it is posted as written then it’s good news for me. Why is it good news you might be wondering? It’s because I’m alive. If not, then I guess I’ll never know. Last week I had surgery to repair a leaky mitral valve in my heart. If you have read my posts over the years you know that health is one of the topics I like to write about, particularly habits that can lead to longevity and well-being. These include my daily smoothie, the benefits of cold showers, how going to a fitness camp and working with a trainer really helped get me in the game of working out and staying in the game, and my renewed love for tennis.  I cannot recall taking a sick day in the last 10 years and over my nearly 34 years at CWS I have taken very few. I have been fortunate to be remarkably healthy. Unfortunately, one thing I have no control over are any conditions with which I may have been born. I remember as a very young boy my pediatrician discovered early on that I had a heart murmur. It was never an issue as this was not that uncommon. I ended up being diagnosed with mitral valve prolapse, which is a relatively common heart issue that usually has no side effects or lifestyle issues other than at one time being required to take an antibiotic before going to the dentist for teeth cleaning.

As time went by the murmur became more pronounced so I was told to see a cardiologist, which I did. He had me do annual echocardiograms to establish a baseline of the heart and follow its progress (or regression). Early on it was discovered that my mitral valve was not working as it should and result in blood leaking back into the left atrium from the left ventricle. Blood is only supposed to flow one way. It comes into the heart from the lungs and goes out to the rest of the body from the heart. If some of it goes back then it’s called regurgitation. This puts more pressure on the left side of the heart to work harder and can lead to the heart enlarging or other complications.

A healthy heart pumps between 55% and 70% into the body. Mine was at 57%, which is the very low end of normal and I’m sure will only get worse as time goes by.

Side effects of mitral valve regurgitation can be fatigue, lightheadedness or dizziness, a racing or irregular heartbeat, difficulty breathing or shortness of breath, and swelling in the feet and ankles, And while it’s possible that I have been contending with some of these issues over many years but have accepted them as my “normal”, to the extent they exist for me, they have not gotten in the way of me being able to play two to three hours of hard tennis without being terribly fatigued, taking vigorous hikes, or rarely missing a day of work.

Over the years my heart leakage stayed relatively moderate…until about a year ago when it worsened to somewhere between moderate to severe with a slight enlargement of the heart beginning to appear. My cardiologist had me make an appointment with one of his partners to carry out a more invasive echocardiogram that required me to be put under. This procedure provides the doctor with a much more clear picture of the heart. Thanks to patient portals doctor’s reports are much more easily accessible than they were. Prior to speaking with him about my results and his recommendations, I read his report and it said that I had SEVERE regurgitation. And yes, severe was in all capital letters. I was mentally prepared to expect that surgery would be needed as prior to having the procedure done I met with the doctor and he said his belief was that it was not a matter of if I had my valve repaired, but when. After the procedure, he said I needed to get it done sooner rather than later and I should meet with surgeons fairly soon. While he suggested a few in San Diego, I spoke with a cousin of Roneet‘s mother who is a cardiologist at Cedars-Sinai in Los Angeles. He said that I should not get hung up on the surgeon, although he or she is very important, I need to go where the strongest team is since it takes about 50 people to care for someone requiring the type of surgery I need. I felt kind of special knowing I would require so many people to take care of me. He said that Cedars has the third-highest ranked cardiology capabilities in the country only behind the Cleveland Clinic and the Mayo Clinic. He had some thoughts as to who should do my surgery. He then checked with four or five other colleagues and they all recommended the same person. It was great knowing that I could see someone with such a stellar reputation who was so close by.

I met with the surgeon and he reviewed all of the reports and said that I definitely needed to have my mitral valve surgically repaired. He said that I was a candidate for robotic surgery for which he has done over 1,000 of them. He said that 80% of them are of the garden variety kind, meaning they are pretty straight forward. Unfortunately, my situation falls into the 20%. He said that he has done many of the 20% but they are more complicated. There are five strings that connect the mitral valve to the heart muscle. Leaking can take place when those strings become loose as this compromises the functioning of the mitral valve. Unfortunately, he said I was born with a weakness in my strings such that all five are now loose so they all have to be repaired. He said that the 80% have a near 100% success rate while the 20% is closer to 95%. Still very good odds. He said that it would be better to wait a bit since it wasn’t an emergency given how taxing Covid was on the medical system in Los Angeles. I told him that worked well for me as January was a very busy month work-wise and I would feel better getting through January and having the work requirements take my mind off the impending surgery.

The surgery took place on February 9th. The doctor said that the surgery should take between three and five hours [Note: surgery lasted over 6 hours] and then expect that I will spend four to five days in the hospital. After I return home I can’t drive for approximately three weeks and hopefully should be back much closer to normal after four weeks. I can’t play tennis for six to eight weeks because the incisions will be on my right side and that will take longer to heal.

Fortunately, I’m still young so, if all goes according to plan, I will feel even better and be able to have many years of benefiting from this surgery because I would have had it done early enough before the heart was compromised. In fact, he said that with the exception of this issue, the rest of the heart is functioning very well. The goal is to get me on the same life expectancy path that I would have been on had I not had this issue.

One of the unintended benefits for me related to this time of working remotely. is that I can be situated in a place that will hopefully be optimal for my recovery while getting back to work earlier than would otherwise be the case because I can do it from home.

My goal is to come roaring back so that I can enjoy the Roaring 20s and beyond.

So there you have it. Hopefully, when all is said and done, I will not only have a much healthier heart but a more grateful one as well.

12 comments on “A Very Grateful Heart”