Roll with the Changes 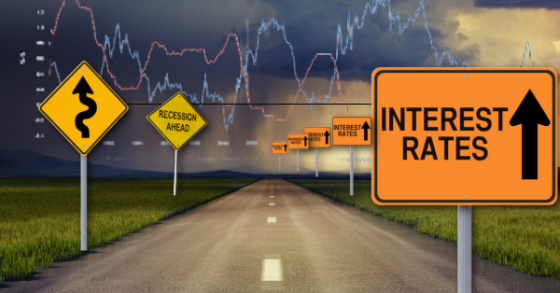 The Fed finally raised short-term interest rates last week. The market is expecting a very fast and steep rate hike cycle as this chart shows. This is a far cry from Powell reiterating that the Fed wouldn’t raise rates until the end of 2023 at the earliest. In the movie Say Anything one of the characters can’t get over being dumped. She plays guitar and she made up a song called “Joe Lies” that she sings to the annoyance of those around her. I’m not going to make one up called “Jerome Lies” even though I took him at his word. I prefer to sing the more uplifting and motivating song by R.E.O. Speedwagon “Roll with the Changes”.

Conditions changed dramatically with the supply disruptions from Covid along with labor becoming much more mobile, flexible, and more in demand as large numbers of people left the labor force. Throw in geopolitical tensions, the war in Ukraine, and unprecedented sanctions in China, and we are really in a Brave New World. 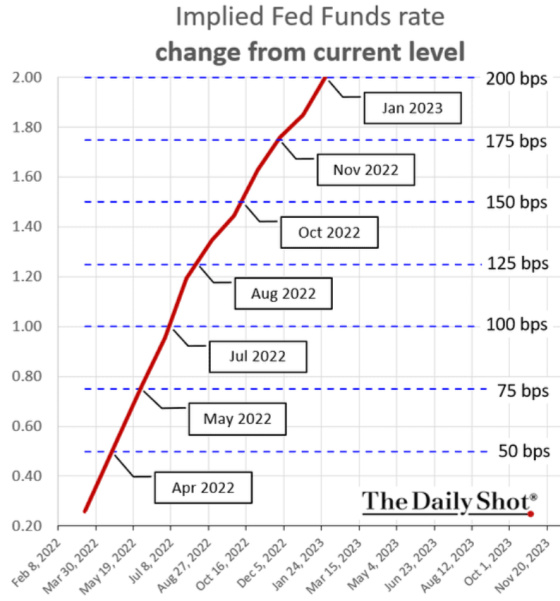 With over 80% of our debt being floating rate, we are acutely interested in the Fed’s reaction function and interest rate path. During Covid, the Fed has definitely been our friend as our borrowing rates have averaged less than 2% for our floating-rate loans. The question of course is how high do rates go and how quickly? The market seems to believe that the Fed’s path is what Russia intended to do in Ukraine. Hit them hard and quickly and then settle down into a new normal of stability. Will the Fed’s approach be as disastrous as Russia’s or will it be able to be successful in achieving its dual mandate of price stability and full employment?

On the inflation front, investors don’t seem to fear a systemic problem with inflation. It’s being priced in as more of a short to a medium-term problem.

So what do investors think about economic prospects?

Bond investors believe that the Fed will not be able to push rates much higher for a long period of time as they are already beginning to price in a recession.  This chart shows the yield differential between 10-year Treasuries and 5-year. One can see that with only a couple of exceptions, when the spread reaches zero or goes negative, then a recession typically ensues within 12 to 24 months. On the day the Fed increased rates the spread went negative for a short period of time. Right now it is slightly positive but for all intents and purposes, it is flashing a warning sign of a slowing economy ahead.

And oil shocks, typically combined with tighter monetary policy, can be major catalysts for economic slowdowns or contractions. We are contending with both now. 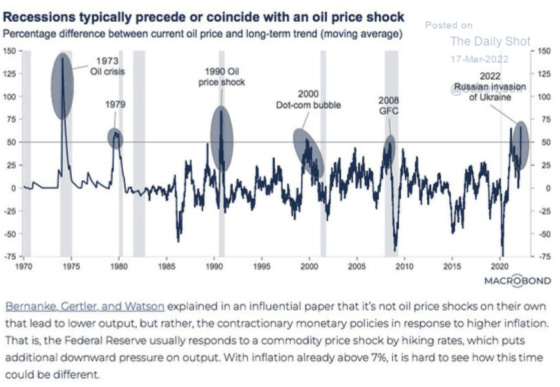 To put this rate hike cycle into context, I put together a chart that shows the yield differential between the 10-year Treasury and 5-year Treasury compared to the Federal Funds Rate.

One can see that when the Federal Funds Rate is high, the spread is low and vice versa. The theory behind this is that low rates are stimulative for the economy and this should be reflected in a large spread between the 10s and 5s (or 2s) as this is a signal for faster economic growth. The opposite is also the case as higher rates can slow down the economy which is reflected in a narrow to negative spread.

What makes this rate hike cycle so unusual, and fascinating, is that it is beginning with the spread at essentially zero, which has not happened before. It has come close but not as close to the edge as we are now. I started the graph in 1988 because prior to that time the data was much more volatile and harder to read. The results were still the same, however, in that high spreads coincided with low rates for that cycle, and low spreads and high rates were highly correlated.

I put together the following table to show how today compares to other rate hike cycles in order to help determine the path of rates and how it corresponds to what the market is projecting.

The spread on March 15th, the day before the Fed raised rates, was 5 basis points which makes it close to two of the cycles in the table above. These are March 25, 1997, and June 30, 1999. On average it took approximately one year for the spread to go negative and another year for rate cuts to start.

As of this writing, the spread is zero so it is highly likely that it will close one of the trading days at a negative spread sometime very soon. 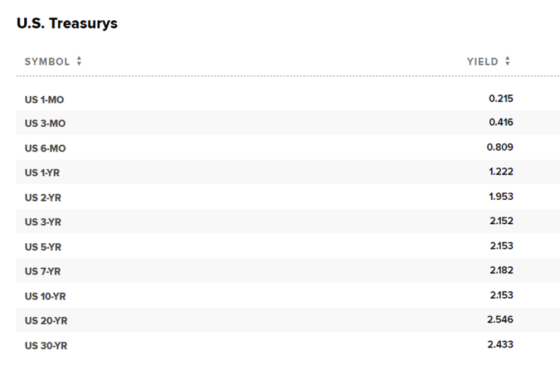 Assuming the spread goes negative very soon, then we could be on the clock for rates being cut again within 12 to 18 months which is in line with the market’s forecast of this occurring in late 2023 as this chart shows. 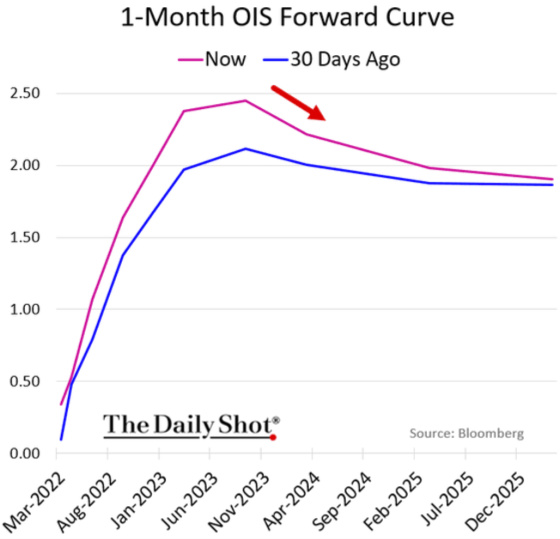 It’s hard not to see how higher gas prices, increasing rents, higher mortgage rates, supply chain disruptions, and escalating commodity prices that will only be exacerbated by curtailment of supply from Russia and Ukraine will not materially impact the buying power of consumers and businesses such that profitability will be impacted. And when the marginal cost exceeds marginal revenue, then businesses will have to think long and hard about adding labor and expanding. Throw in less fiscal support due to Covid relief measures going by the wayside, and we have some economic challenges ahead that the bond market seems to be pricing in.

When the marginal cost exceeds marginal revenue, then businesses will have to think long and hard about adding labor and expanding. Click To Tweet

The average increase over the last six hiking cycles has been 2.29%. So far, over the last 40 years, the trend has been to have lower highs and lower lows as this chart shows.

Assuming this trend continues and the last peak in the Federal Funds Rate was 2.50%, then I think there is good historical precedent for the funds rate to get close to 2.50%, but not exceed it, which is in line with what the market is forecasting. With that being said, it only shows it staying there for a short period of time and then dropping to 2.00% after that.

Setting aside what the market thinks and the Fed needing political cover to show it’s fighting inflation, I don’t see how raising rates helps cure any of the supply disruptions our economy is facing. In fact, one could argue that it will do the opposite. We need more housing but higher interest rates may create less incentive to create more. There is a lot of pressure not to finance fossil fuel companies independent of interest rates which create less of an incentive to make long-term investments in the energy sector. Higher rates won’t get more sand to frackers who are facing a shortage of it to produce more oil. We need firms to be incentivized to innovate to find ways to use fewer commodity inputs which I’m not sure raising rates will do.

The Fed has a dual mandate for price stability and full employment. Clearly eviscerating demand would run counter to its full employment mandate.Click To Tweet

What higher rates can do, and there could be an argument among financial purists that this is necessary, is destroy demand so that we can better align supply and demand. This will cause economic hardship via a lot more unemployment and an impact on people’s standards of living. As I mentioned earlier, the Fed has a dual mandate for price stability and full employment. Clearly eviscerating demand would run counter to its full employment mandate. The Fed is in an incredibly difficult spot and the market knows this. It has to raise rates and do it quickly and aggressively, but it also knows that it is very much at risk of going too far and breaking something, or many things in the economy.

Whatever happens, I will do my best to prepare myself to roll with the changes.