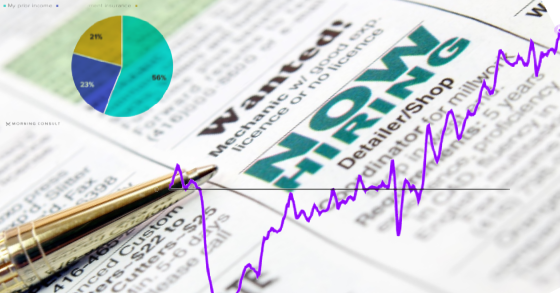 Last week was my 34th anniversary at CWS. I have been so fortunate to have had the opportunity to work with so many wonderful people over all of these years and to be blessed with my amazing partners Steve and Mike. I am really proud of all that we have accomplished, our resilience in the face of adversity over the years, and the opportunity we have had to enhance the lives of our employees, investors, residents, vendors, and our communities. I will focus on a more reflective post next year after my 35th anniversary.

I have always tried to balance the long and short-term to help guide my decision-making. It’s important to be in a good business with solid long-term demand fundamentals which apartments have proven to be. Then it’s been incumbent upon us to pick where to invest to provide us with the prospect of achieving compelling long-term risk-adjusted returns. And because apartment values, and most real estate, can be impacted significantly by the level of interest rates and the ease or tightness of money, it’s vitally important to follow economic trends carefully to see how they may influence the Federal Reserve as well as having an understanding of its reaction function in terms of what will trigger a policy change.

All of this monitoring and analysis falls under the umbrella of very powerful, long-term trends that, to me, represent the most important governors of how high-interest rates can go. These are the aging of the industrialized world and the tremendous amount of debt that exists at average rates that are relatively low. The former will keep a lid on the economic growth rate around the world as well as increase the demand for savings while the latter will make it extremely difficult to raise rates to levels that are materially higher because the financial distress this will cause will be extremely harmful for the economy as borrowers can’t refinance their lower cost debt because the income and/or collateral values will be insufficient to give lenders a margin of safety to make new loans at these new rate levels. This will lead to defaults and foreclosures and sharply curtail economic activity.

I always think it’s important for investors to identify potential inflection points in the economy so they can do their best to anticipate which direction things may go and how this will impact interest rates via Fed policy. The one I have been focused on over the last few months and is now starting to come to a head is the expiration of emergency unemployment benefits that has already happened in a number of states and will be far more widespread after September. So let’s turn to the charts to see what we can ascertain.

One can see how continuing claims for unemployment have been dropping largely due to a reduction in emergency benefits. 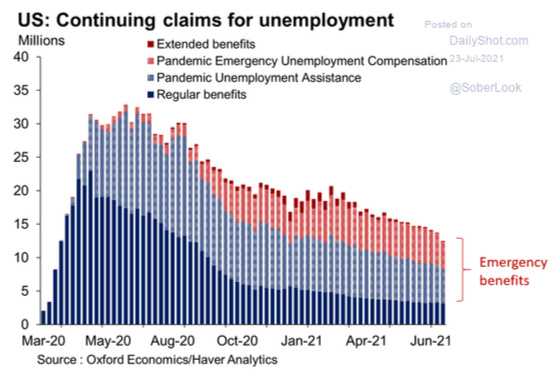 There’s been a lot of debate as to whether the difficulty in filling positions is due to too many people making more money not working versus other reasons (e.g. childcare needs). According to this survey, more than half of the people who responded said they were making more money collecting unemployment than working. 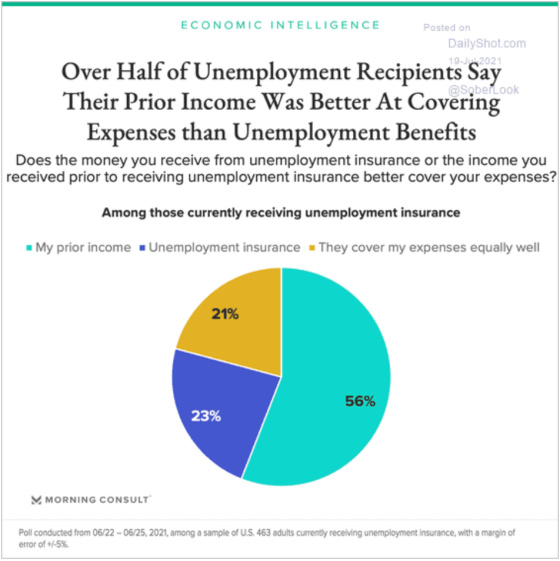 Not surprisingly, with emergency benefits expiring a relatively large percentage of people are feeling pressure to find a job. 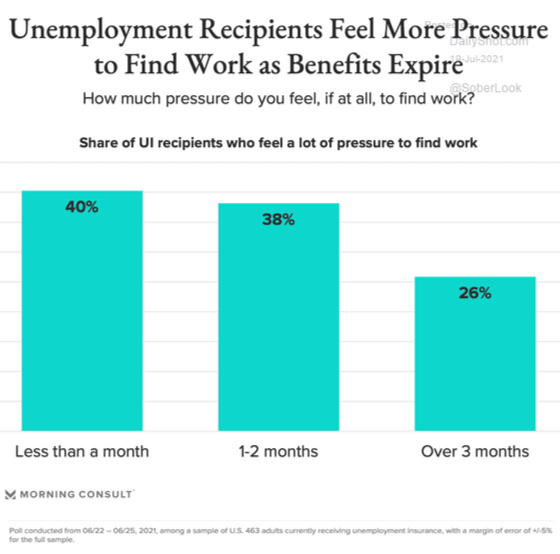 Fortunately, they will be entering a job market in which there is a high demand for workers. According to this chart of new job postings from Indeed the demand for labor appears to be quite robust. 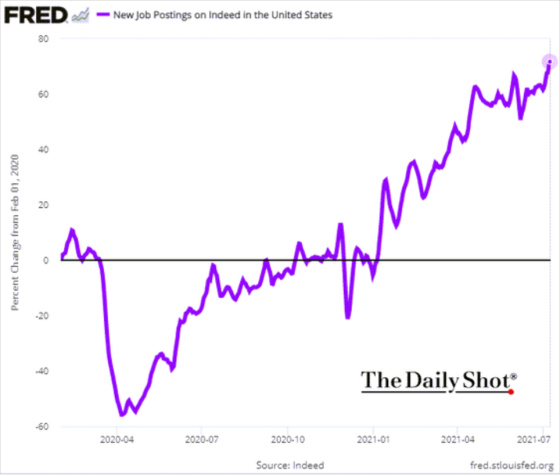 Based on these survey results, we should expect to see a meaningful increase in the number of people entering the labor force over the next 12 months. This is not surprising given the expiration of unemployment benefits and presumably kids returning to school and lessening the need for childcare. 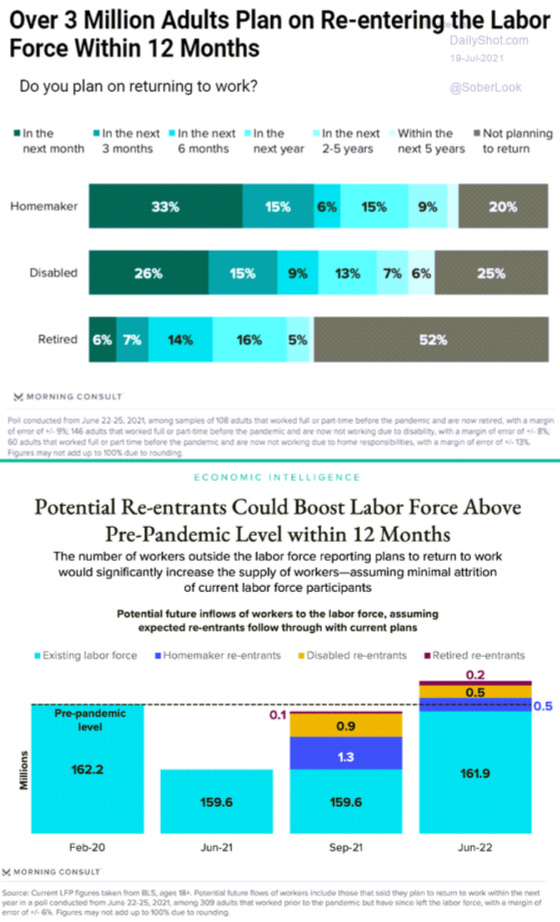 Another data point supporting the assertion that supplemental unemployment benefits have kept a significant number of people from getting a job is depicted in this chart. This shows how states that ended benefits early have shown a much larger drop in continuing unemployment claims than those that have not. 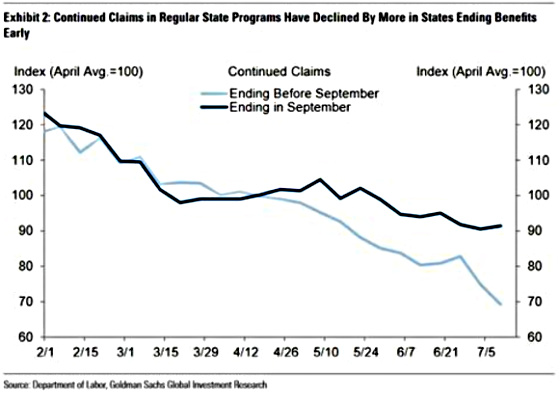 Texas is leading the way in having the largest number of people losing unemployment benefits. 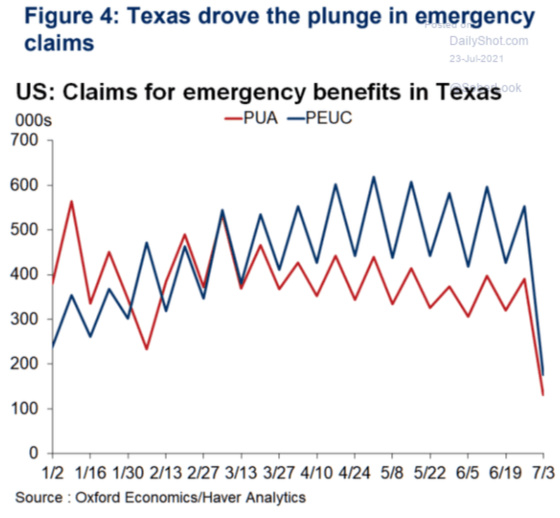 And with benefits set to expire after September fiscal stimulus is projected to go from a large positive contributor to economic growth to being a headwind, which started this year. 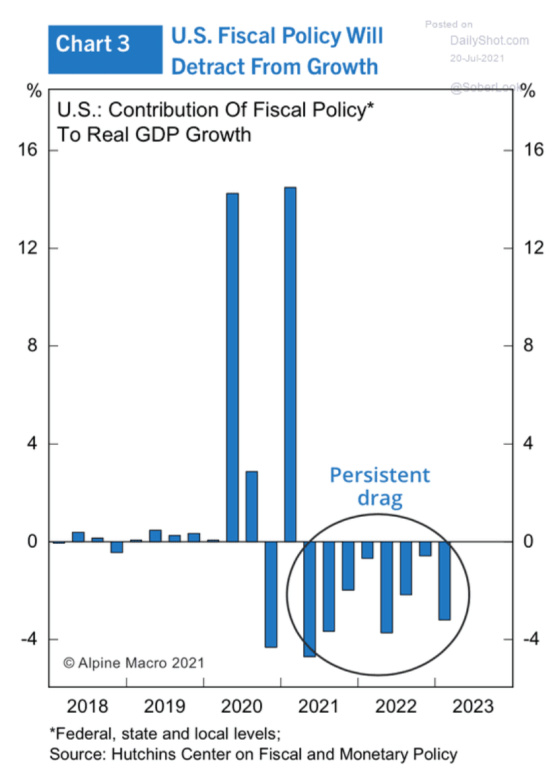 And while the economy will benefit from more people re-entering the job market, the countervailing forces of fiscal contraction and the Delta variant of Covid-19 beginning to infect more of the unvaccinated population, the bond market’s surprising drop in interest rates may be foreshadowing a return to our more normal, slower economic growth. 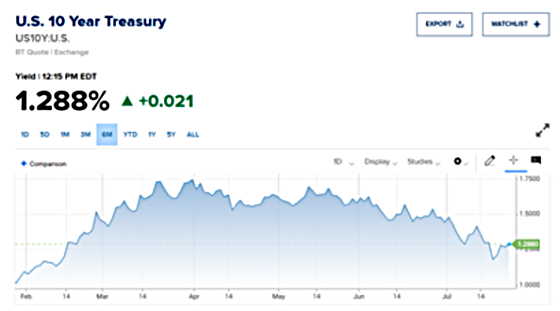 Since I started off talking about my 34th anniversary and for over half of that time I have been an increasingly more confident advocate of utilizing floating rate debt to finance our properties, I thought I would end this post showing what 30-day Libor has done since I started with CWS in July 1987.

One can see that over the past 34 years we have had lower highs and lower lows.Click To Tweet

The awareness of this consistent pattern and my belief that the powerful longer-term trends of an aging industrialized world and the greater reliance of individuals, institutions, and businesses on securities and debt issuance for their capital needs would keep Libor from exceeding previous cycle highs has given me the conviction and courage to continue recommending we stay with floating rate debt. So far that bet has paid off by having a materially lower cost of funds than the fixed-rate alternatives at the time of origination. And while the Fed will most likely raise interest rates at some point over the next few years, I am not expecting that we will be faced with an inflection point in that the next cycle high will eclipse the previous level of 2.52% that was reached in January 2019.

I wouldn’t be surprised that 34 years from now we still have short-term interest rates at less than 1%.