So Much for That? Is The Floating Rate Still a Winning Bet? 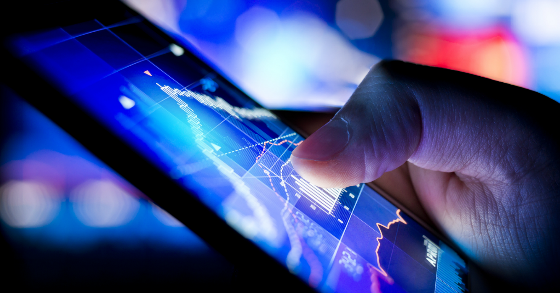 So up until this point having bet on floating rate has been a winning bet. The question now is whether it will be going forward. Before answering that, let me first look at why there has been such attention drawn to the 10-year Treasury yield breaching 3% for the first time since late 2013.

Why is this so significant? I think this table puts it into some perspective.

One can see that over the last 25 years we have had lower lows and lower highs in 10-year Treasury yields within each cycle. We have been knocking on the door of 3.04% and this is the closest we have been to reaching a prior peak by far. The question is will we breach it? Of course, no one really knows. There are a lot of good reasons as to why the old high may be taken out. We have a huge issuance of Treasury securities to fund the much bigger deficits resulting from greater spending and the tax cuts, less foreign buying of Treasuries, a more hawkish Fed, inflation finally hitting the Fed’s target and a decent labor market with some improving wages. And yet, with all that, so far the old high has held. Can we turn to history and numerical patterns for any guidance?

I then went on to make a case that the very flat yield curve would lead to a relatively high probability that short-term rates one and two years out would go lower. I didn’t address long-term rates because floating rate loans are based on short-term rates so they were less of a concern. With that being said, the 10-year Treasury convincingly breached 3.04% and closed at 3.11% on May 17th.

One of the great risks in investing (and in life) is being dogmatic and suffering from confirmation bias. In other words, holding fixed beliefs and being so tied to particular outcomes that you ignore all disconfirming evidence and latch on to anything you think may support your position, no matter how flimsy. With this in mind and recognizing that I am a fallible human being and susceptible to this as well I did a ridiculously worthless exercise from a statistics standpoint but still interesting nonetheless. I wanted to see if there was any predictability from past yield peaks and troughs based on whether any correlations existed between them to help determine what the peak might be in this uptrend. So I did a very simple regression of the first five trough and peak yields to see if there was a relationship between the two to help predict where the current cycle would peak. For anyone familiar with elementary statistics, you shouldn’t really do a regression analysis with fewer than 30 observations so this should be taken with a huge grain of salt. Nevertheless, the results show a very strong fit as the following table depicts. 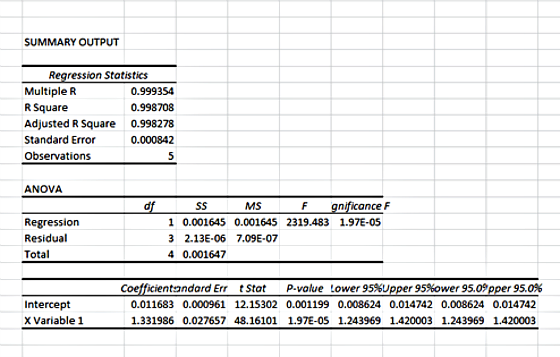 With an Adjusted R Square of nearly 1.0 and very high t Stats and F score, there seems to be a strong relationship between peak yields and trough yields. So what does this simple model predict for the peak yield in this cycle? It projected a yield of 2.99% and with a standard error of 8.4 basis points then one standard deviation would have it fall between 2.90% and 3.08% and two standard deviations would create a range of approximately 2.81% and 3.16%. Approximately 95% of the observations should fall within two standard deviations. So we’re still in the range but I would be lying if I said that I didn’t take notice after the 10-year breached 3.04% and began to wonder how high rates can go. Yet with confirmation bias running rampant in me in that I still think we’re in “lower for longer” interest rate regime because of the aging of the industrialized world, technology, the financialization of our economy leading to high debt levels, and globalization, I am latching on to 3.16% now as my new indicator for whether the tide has gone out for longer than I would have expected.

To put the movement in yields in some perspective, this has been one of the most vicious bond downturns, particularly for corporate debt, only superseded by 2008 and the taper tantrum of 2013. These turned out to be pretty good buying opportunities. The following from sentimentrader.com shows how bad this down cycle has been. 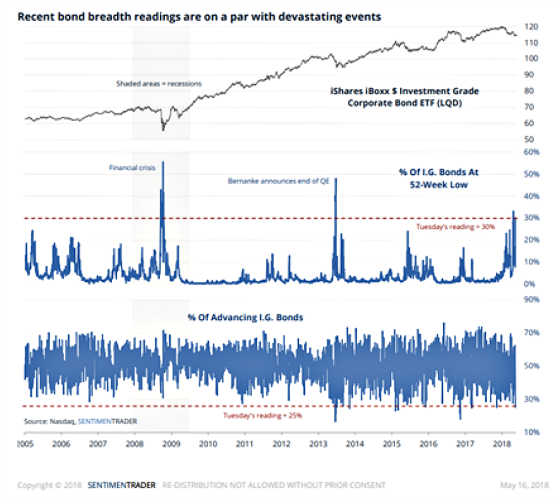 “On Tuesday, that market (corporate bond market) suffered one of its most lopsided bouts of selling in more than 13 years. Only 25% of the thousands of bonds tracked by the Nasdaq managed to show a gain on the day, and more than 30% of sunk to a 52-week low. The only days that have seen this degree of selling were in September and October 2008 and three days in mid-June 2013 immediately after Fed Chairman Bernanke announced a phase-out of the quantitative easing program. In other words, the readings we’re seeing now are on a par, or worse, than the two most devastating events in the corporate bond market in nearly a decade and a half.”

For what it’s worth, according to the Sentimentrader editor, 100% of the time three months, six months, and one year later the LQD generated positive returns after more than 30% of investment-grade bonds hit 52-week lows. The median returns were 15.1%, 8.9%, and 25.9%.

To put the vicious correction in more perspective, the market was already in bad shape when on May 3rd they wrote about how bad the carnage was in the bond market as the following chart and narrative show. 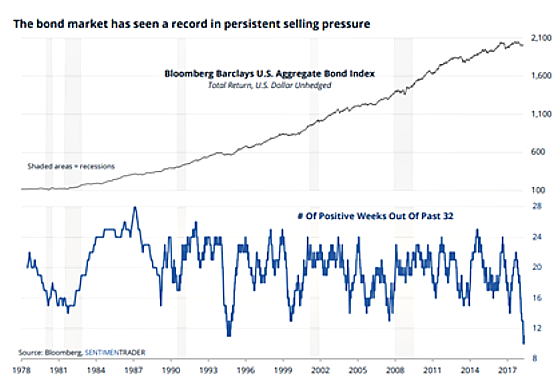 “The index is down almost 3% from its high last September. That doesn’t sound like much, but it’s a total return index, and the worst loss in its history, back in 1994, was barely 6%. Most declines have stopped around 4%. What’s most remarkable is that over the past 32 weeks, about 8 months, the index has managed a positive return during only 10 weeks. Even in 1994, it didn’t suffer as persistent selling pressure. There have been a total of 39 weeks that saw 13 or fewer weekly gains out of the past 32, leading to gains in the bond index over the next six month 100% of the time, averaging +3.9%. Over the next year, all of them also showed gains, but the average return jumped to +11.6%. It’s been a good buy signal for bond investors.”

Thus, it would appear that the selling has been so extreme that the probability of generating strong returns over the next year are quite high if history is any guide.

I will wrap this post up with a few more charts that have caught my attention. The first one is one I have shown before and it depicts the titanic battle going on between hedgers, the so-called “smart money”, and speculators (“dumb money”) in the futures market for 10-year Treasury bonds. The hedgers have never been more positioned for yields to drop while speculators are positioned in the opposite manner. So far the speculators have been winning. Kudos to them but history is not on their side when they are positioned so uniformly as they are now. Since they often have much less patient capital because of performance scrutiny and leverage, they are susceptible to being transformed into big buyers by having to close out their positions if yields start going down and they are at risk of capital loss and margin pressures.

When this extreme positioning is combined with the carnage in corporate bonds I would not be surprised to see bonds make a powerful rally sometime over the next couple of months. 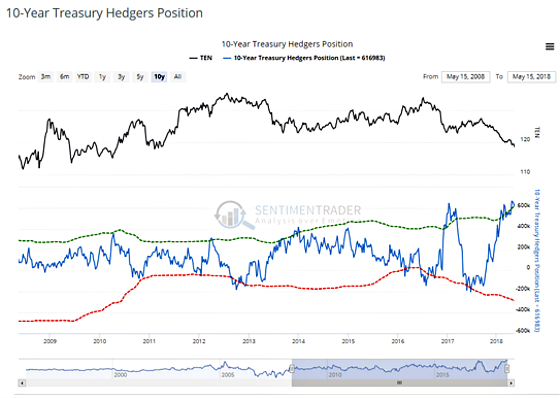 The final charts show how higher interest rates are starting to impact credit performance for subprime auto loans and how the overall growth of auto credit has been slowing down. One can see that subprime auto delinquencies have exceeded the levels that were present during the Great Recession. 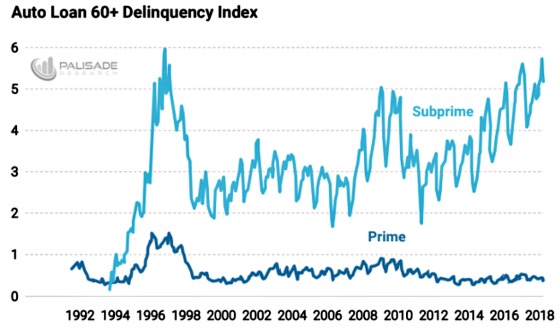 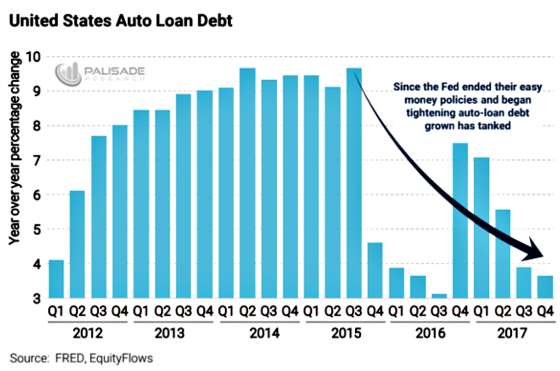 Of course, this is just one indicator and I’m sure others can point to other segments of the economy doing just fine so this could be another example of confirmation bias taking over.

Stay tuned. This is starting to get very interesting.

2 comments on “So Much for That? Is The Floating Rate Still a Winning Bet?”