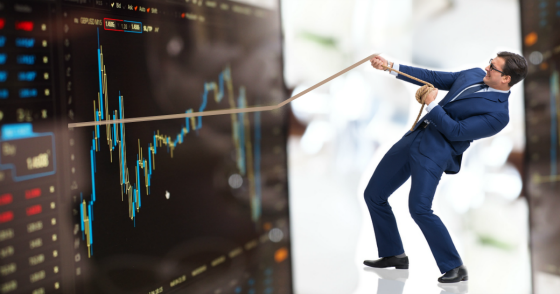 Are jobs a lagging indicator? That is the question as last week was a very ugly one in terms of the Apple announcement and other economic reports suggesting the global economy is slowing. At the same time, the jobs report was quite stellar as the economy produced a seasonally adjusted 312,000 jobs, far higher than expectations. Let’s start with the bad and then turn to the good and what the Fed’s response was.

Not surprisingly, the stock got hit very hard and has lost over $400 billion in market capitalization from its peak on October 3rd. It shows how the market is a very impressive forecasting machine as investors began pricing in weakness approximately three months before Tim Cook made his announcement that revenues and earnings would come in far less than previously projected. 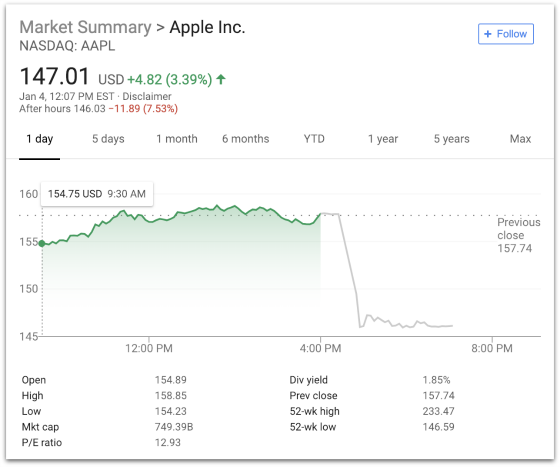 Weakness also manifested itself in slowing growth in manufacturing and continued softness in housing and autos. 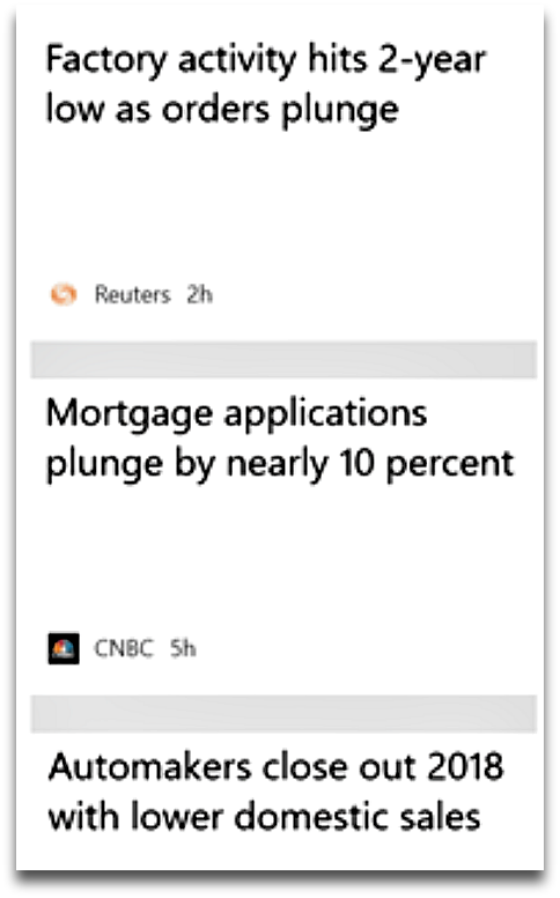 This led to some Federal Reserve officials to begin to talk down the prospect of future rate hikes in 2019. 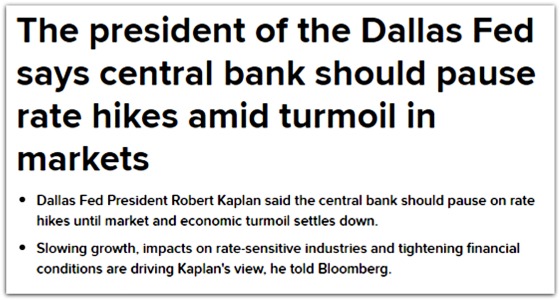 This even carried over to one of the Fed’s biggest interest rate hawks, Loretta Mester.

One can see from the following chart why Mester is paying attention to inflation as inflation expectations have been coming down as measured by the 10-year breakeven inflation rate. The trend has been unevenly lower over time.

In the wake of Apple and weaker economic news, Treasury yields sank. 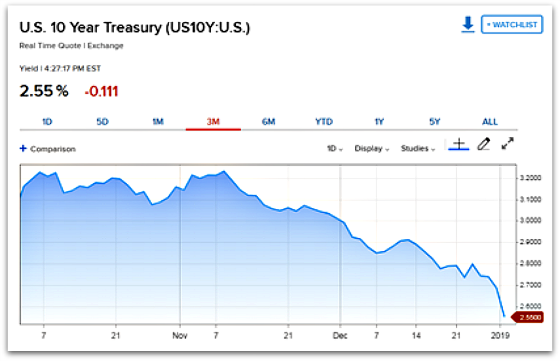 But then a funny thing happened on the way to deflation’s inferno. Everything changed with the much stronger than expected jobs report. 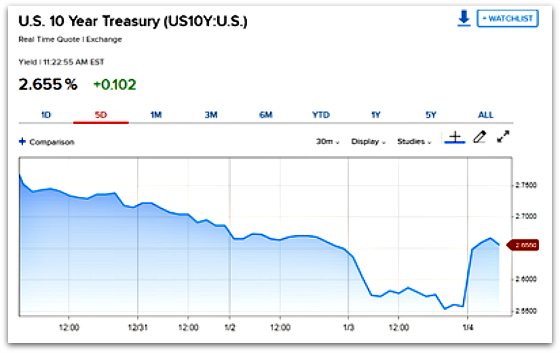 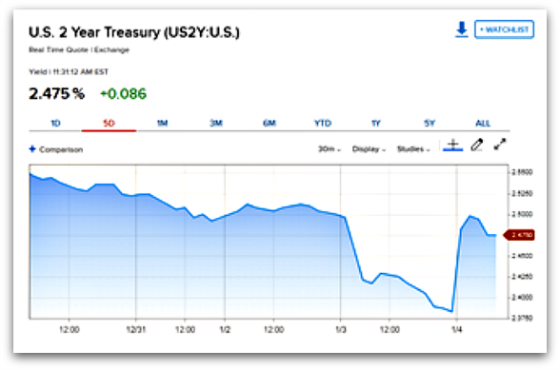 It looks like Treasury yields backed up to where they were before the Apple announcement and the other economic reports, thereby nullifying each other.

To put the jobs report in perspective, here is a longer-term chart showing the annual percentage change in non-farm employment. One can see that we are at close to 2% which is about par for the course when we are in the mature phase of the economic cycle. We have been around this level for approximately seven years. It has been an impressively stable and durable growth trend.

Interestingly, almost all of the growth in employment is happening among those 25+, particularly in the 55+ category. 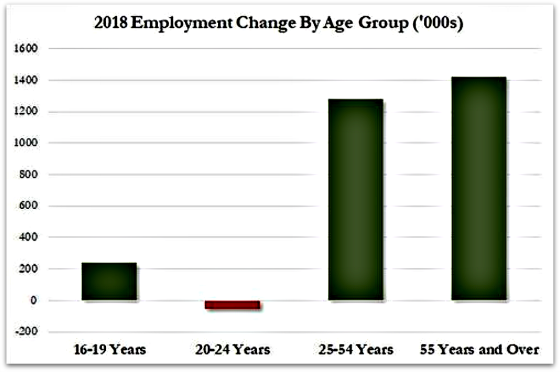 The stock market was very pleased with comments that Chairman Jay Powell made about monetary policy that investors interpreted as being dovish. 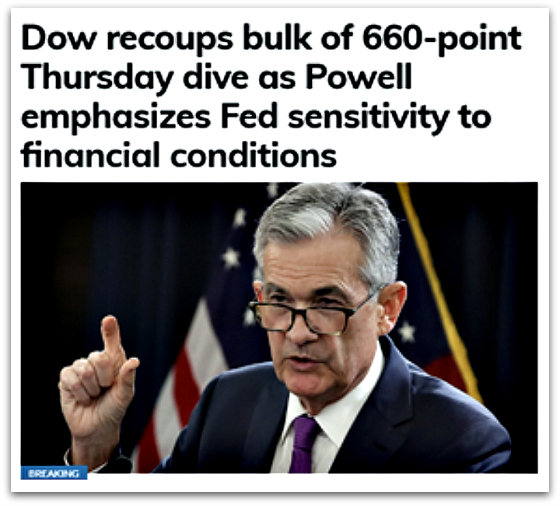 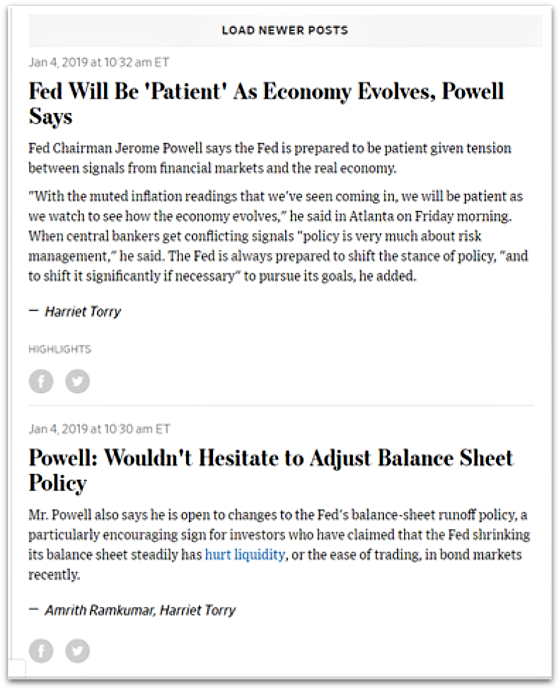 The Fed has now positioned itself for maximum flexibility. It can now choose to not hike in 2019 if the economic reports are the true representation of the economic direction and outlook while still leaving the door open for raising rates if it turns out that the job market is the real indicator with the economy heating up. I would put my money on a higher risk of slowing versus acceleration as jobs have proven to be a lagging indicator and there are too many indications of global growth decelerating that one jobs report will not reverse. In addition, I am expecting revisions lower to the jobs number in the months ahead due to what appears to be some funky seasonal adjustments. Time will tell as to who will win this economic tug of war.

I will leave you with one very eye-opening table that no one is talking about but could be the true canary in the coal mine and suggests not all is rosy in terms of global liquidity. The Fed has created a new financing rate that it hopes will replace Libor. It’s based on overnight, secured transactions which require collateral to be posted by borrowers. If you study the table you can see that between December 6th and 19th the rate hovered in a range of between 2.19% and 2.30%. After this date, however, something happened in the marketplace that suggested there was a huge premium to be paid for secured borrowing. Collateral became extremely scarce. The rate moved to 2.41% on the 20th and then on December 31st it shot up to 3.00% with the 99th percentile at an incredible 6.25%. It went higher on January 2nd to 3.15% with the 99th percentile coming down to 3.70%. It has dropped to 2.70% as of January 3rd, which is still quite a bit higher than before the year-end scramble for collateral and borrowing. 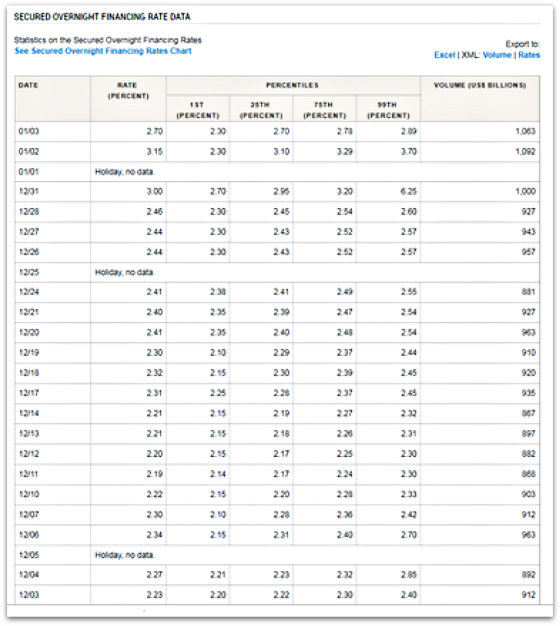 I’m going to watch this very carefully. When rates jump that much overnight something is amiss and needs to be understood. There was clearly a need for year-end portfolio adjustments that market participants could not accommodate without being compensated greatly.