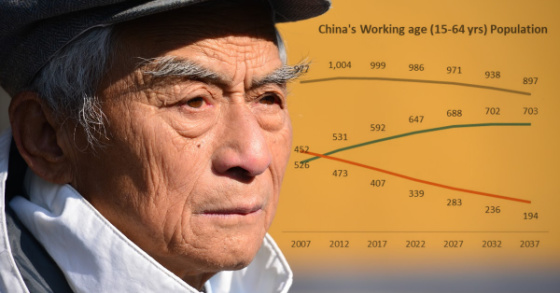 Japan has been my model for why I think interest rates will stay low. Its rapidly aging society has led to a shrinking pool of labor over the last two decades which has led to less consumption and more savings. In addition, public spending has increased significantly to help keep the economy growing in the face of strong demographic headwinds. The byproduct of this situation is that public debt is quite high and short-term interest rates have stayed below 1% since 1995. This phenomenon is starting to play out in Germany, Italy, the U.K., Spain, South Korea, Hong Kong, and even the United States. This is why I believe that rates will stay low. Japan started the trend but it is spreading rapidly to the rest of the industrialized world. And  China is no exception. Or so I thought.

Last week China released its decennial census and it revealed that the number of births nationwide fell to the lowest level since 1961. This is an inauspicious comparison since 1961 was after the decade of the Great Famine which killed tens of millions of people. The following chart from Bloomberg shows how the number of annual births in China has been falling since the late 1980s. 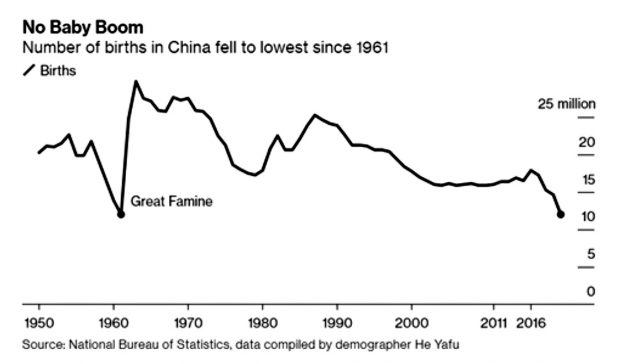 China’s one-child policy has been too effective in that it has dramatically curtailed the nation’s population growth such that it is growing older fairly rapidly and will catch up to Germany and be only slightly behind Japan over the next 30 years as the following chart shows: 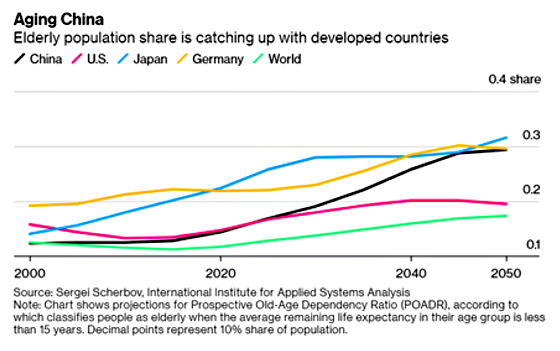 The labor force is now shrinking as well. 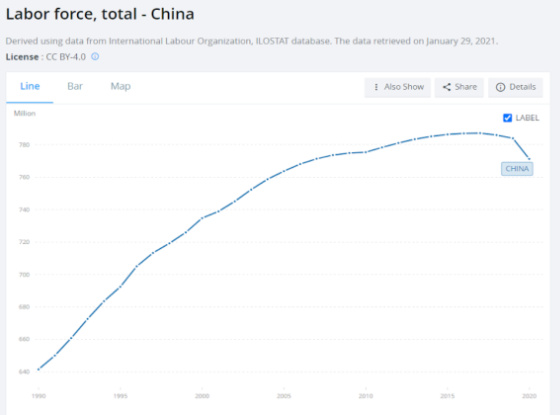 And while I still believe that the powerful demographic headwinds already in place in the industrialized world will keep rates low, especially as debt issuance has increased quite significantly to support economic growth or to prevent economies from collapsing during the Great Recession and Covid-19 pandemic,  I have also realized that when making comparisons and extrapolating from what I think is the best example, I better make sure that they are quite comparable or I will be at risk of drawing faulty conclusions because they are not as comparable as I thought.

One key difference is that the level of productivity among those leaving the workforce in Japan is quite high and those replacing them are not only relatively small in numbers but do not have the skills and experience yet to be as productive as those who are leaving. This is not the case in China. The retirement age in China is 60 for men and 50 for women and those leaving the workforce are, in general, not highly skilled or productive relative to the potential of those entering the job market as well as those growing in their careers.

China was able to grow its economy and improve the lives of its citizens by opening up its economy under Deng Xiaoping starting in 1985 with the creation of Special Economic Zones. This allowed for China to take advantage of its huge, underutilized labor force by creating a massive agglomeration of manufacturing firms and industries that developed a very large and effective ecosystem to supply the industrialized world with goods it desired very cost-effectively. It also led to a massive internal migration of Chinese from rural areas to cities because the pay was so much higher. In addition, the large numbers of people leaving the agricultural sector led to that segment of the economy becoming much more productive as it substituted equipment and technology for labor. This allowed China to become more sufficient agriculturally while enabling it to become the factory for the world.

But now with society populated by millions and millions of kids and young adults without siblings and doting parents who have saved so their kids can have better lives, these future workers are better educated and not willing to do the hard work of the factories. Plus, their parents don’t want them to do that either. They want to use their brains and not their brawn. Thus, for China to keep growing it’s going to have to continue to have more people move from rural areas to the cities, focus on its human capital through education, vocational training, and continued skill enhancement, as well as raise the retirement age so more people stay in the labor force.

The following charts show how China differs from Japan with regard to this potential. Japan is about as urbanized as it’s going to get so it’s not going to draw people from the countryside to the cities in meaningful numbers in order to be able to add more productive labor inputs to generate more economic growth. China, on the other hand, can. 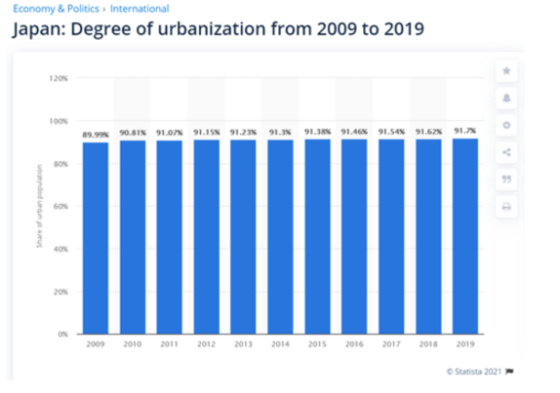 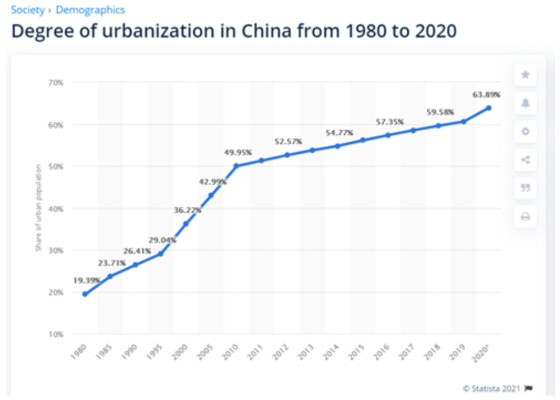 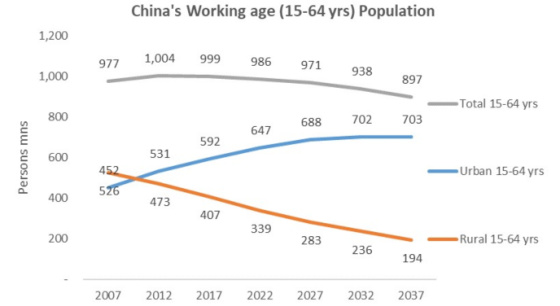 And since the rural areas can remain productive from an agricultural standpoint, the loss of workers there should not have a material impact on the country’s output. Their movement to the cities is what will help manufacturing employers be able to stave off a big loss of employees due to retirement, impairment, or death. The following chart shows how China’s urban employment should continue to grow meaningfully over the next 10 years and then will begin to slow materially.

The ones who will be entering the labor force or who have recently will be the ones who China will look to as the engine of high value-added growth for the economy. China has been contending with slower growth due to very little growth in the labor force and declining productivity as the following graph shows. 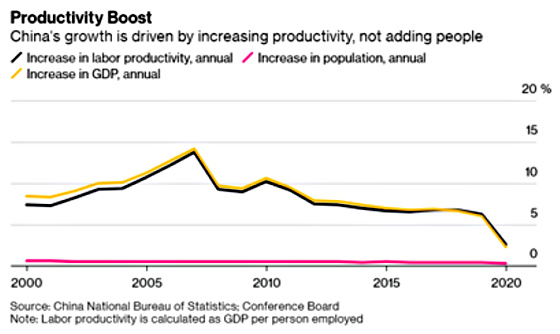 It will now be increasingly imperative for China to improve its productivity by ensuring that its workers have the tools and education to innovate and be able to compete in the economy of the 21st century. As the following chart shows, while China is heading in the right direction, it still has a long way to go to catch up with Japan, Germany, and the United States. 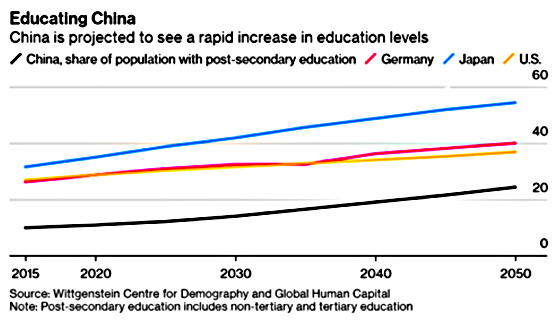 Returning to the Bloomberg article, China’s strategy for maintaining strong economic growth in the face of powerful demographic headwinds is as follows:

Beijing has a two-pronged approach to maintaining economic growth as its population shrinks. First, it intends to slow the decline of the urban workforce by raising the retirement age and encouraging migration of more of the country’s 510 million rural residents to cities. Second, it plans to raise productivity — a measure of economic output per worker — with the latest five-year plan emphasizing better vocational education and more investment in scientific research, automation, and digital infrastructure.

The government plans to gradually raise the retirement age from the current level of 60 years for men and as low as 50 for women, and plans for 50 million people to move permanently from rural to urban areas in the next five years to take up service and manufacturing jobs with higher wages.

Assuming the Chinese are successful at raising the retirement age, having more people move from the rural areas to the cities, and significantly improving educational outcomes for a wide swath of the population, then China may not have to follow the same trajectory as Japan as a China economist believes.

Chi Lo, a senior China economist at BNP Paribas Asset Management, estimates that a universal retirement age of 65 and loosening of internal migration restrictions could add at least 150 million to the urban workforce by 2035.

As a result, “the population peaking doesn’t make much of a difference in the next 10-15 years,” he said.

Reading this article made me realize how China does not have to follow in the same footsteps as Japan because its conditions are so much different. It was a great reminder to choose one’s models carefully.