I keep focusing my blog posts on economic data via chart representation because we’re in one of those times that needs to be monitored closely for trend reversals (disinflation to inflation) and a change in the Fed’s reaction function (supporting Main Street vs Wall Street). With interest rates having a huge impact on our business at CWS I feel compelled to stay in the moment by digesting what I think is relevant data, processing and reflecting on it, and ultimately write about how I think it will impact interest rates and our apartment business. Philosophical thoughts and lessons learned from living my life and from others have been temporarily put on the backburner.

My ultimate goal in researching and writing is to gain clarity, conviction, and courage.Click To Tweet

Sometimes these can come about by focusing on the short-term while at other times it necessitates thinking about long-term trends and exploring deeper issues tied to philosophy, personal growth, health, and wellbeing, etc. At this moment in time I need to wrestle with the short-term to help me gain clarity to put me in a much better position to have conviction and the courage to either stay the course or to change direction in terms of how we finance our properties (stay floating or start shifting more to fixed).

So what was important about last week?

Federal Reserve Chairman Jay Powell blinked. He finally started coming around to the market’s belief that the Fed might have to tighten sooner than his public statements. From my perspective, I have thought that they would start first by tapering their purchases of Treasuries and mortgage-backed securities and then raise short-term rates if Main Street started seeing material improvement. The opening is now there for a late 2023 rate increase versus 2024 at the earliest based on his previous statements. In fact, there was an increase in short-term rates that affects loans tied to one of the Libor replacement indices, the Secured Overnight Financing Rate (SOFR). At CWS we now have a few loans tied to SOFR now that Fannie Mae and Freddie Mac are no longer purchasing apartment loans tied to Libor so this modest movement will increase our interest rate on those loans.

The following table shows how SOFR increased by 0.04% in one day and the volume of transactions was quite high. I will end the post by discussing this a bit more.

Regardless, the Fed is dealing with a lot of uncertainty and should remain nimble. And while in the short-term the Fed being dogmatic about not raising rates until 2024 at the earliest (previous statements) may be helpful to CWS since it keeps our loan rates at very low levels, if it leads the Fed having to overcorrect on the upside of raising rates then this isn’t a very good long-term outcome for us either. I want them to not get in the way of the economy growing while also not letting inflation get out of control either. This excerpt from an opinion piece in the Financial Times does a good job of articulating some of the challenges the Fed is facing. 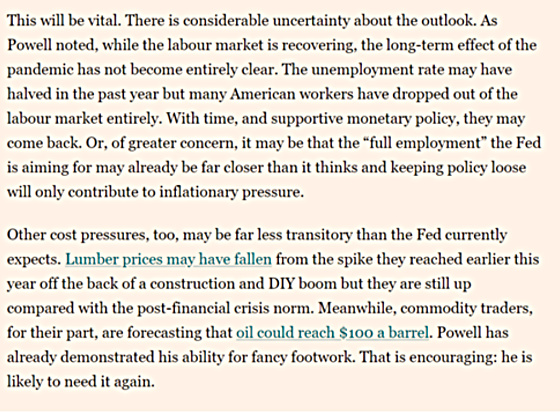 I love looking at the instantaneous reaction of markets to Fed policy statements. Sometimes they stick and sometimes they reverse.

Here are some of the ones I find quite interesting.

This one shows how the Fed’s more hawkish tone spooked investors betting on inflation and rewarded those betting against it. 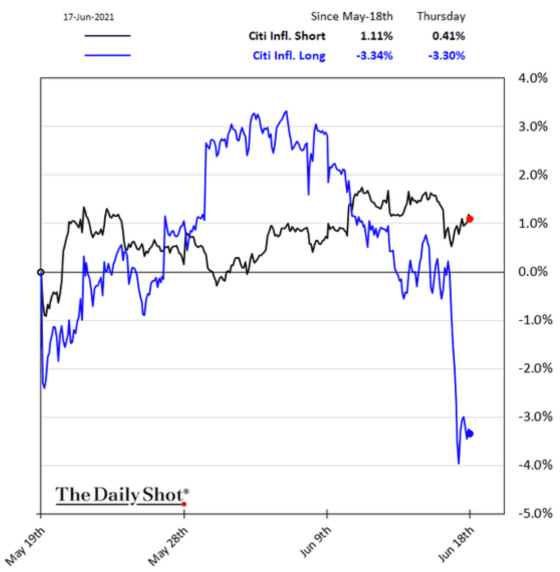 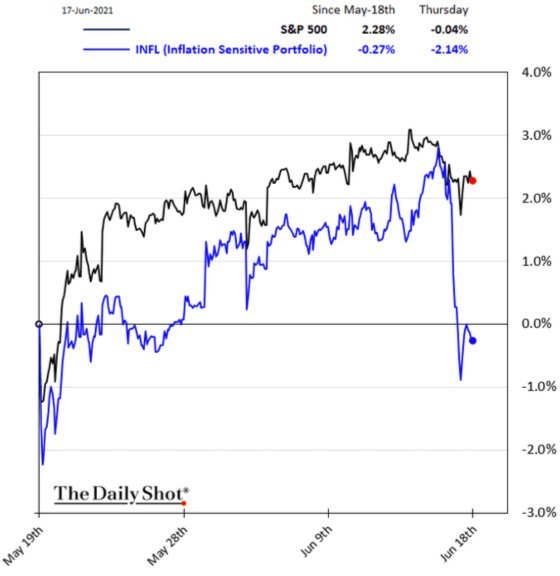 In an inflationary environment companies that previously did not have much pricing power (value stocks) should see a significant improvement in earnings given a greater ability to raise prices. On a relative basis, this can make them more attractive compared to growth stocks that are priced more expensively because of their stronger inherent growth characteristics. This gap should narrow with stronger pricing power for companies deemed to be value stocks. The unwinding of the reflation trade should result in growth stocks outperforming and value underperforming which is what has happened. 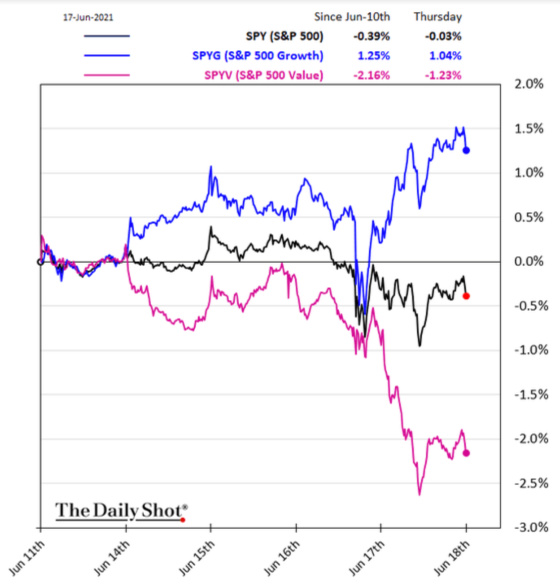 Commodities are the ultimate bet on inflation and they have been giving up their gains over the last few weeks. 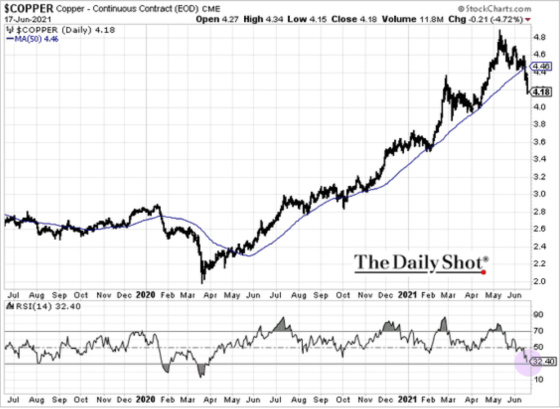 Lumber is something we obviously pay close attention to given that we build apartment communities and it’s something I’ve written about before. These charts show how the market appears to be coming into more balance between supply and demand despite relatively low inventories. Prices have come down quite significantly but are still much higher than in previous years. 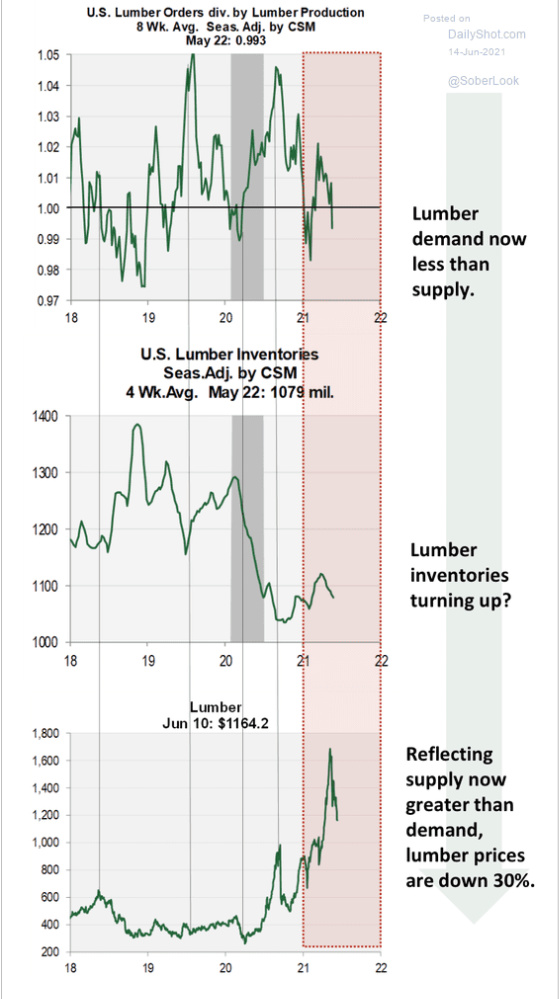 Despite very concerning drought conditions in many parts of the country, particularly the west, grain prices are finally coming down after a significant run-up. 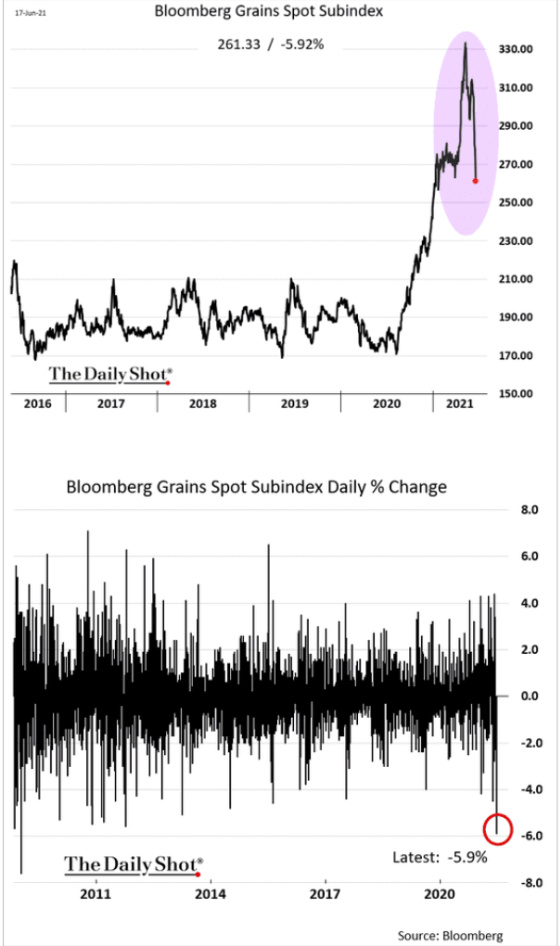 Commodities across the board have been selling off sharply. 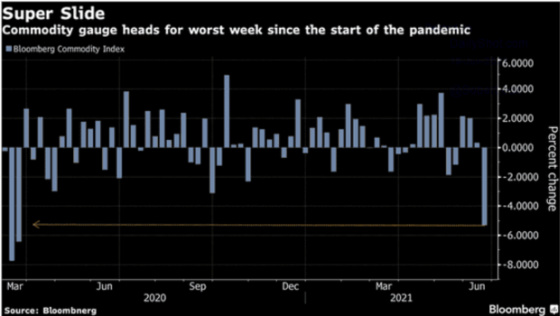 Bank stocks do well with the prospect of higher interest rates since they are typically able to raise their lending rates much faster than their deposit rates, thereby improving their profitability. The unwinding of the reflation trade hurt bank stocks particularly hard as interest rates dropped based on the expectations that a tighter Fed would slow economic growth. 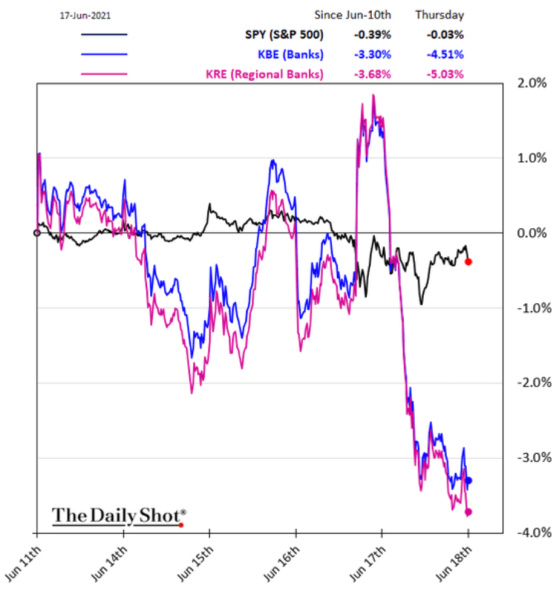 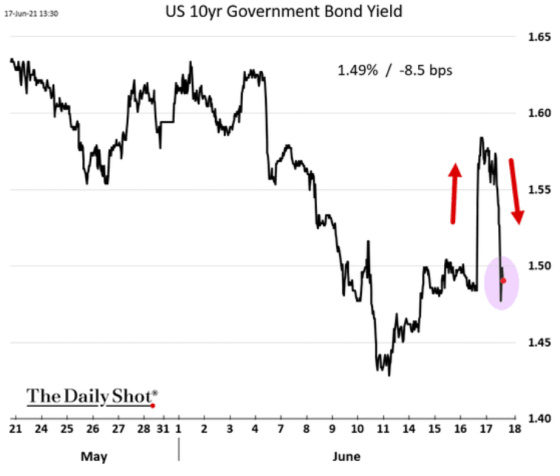 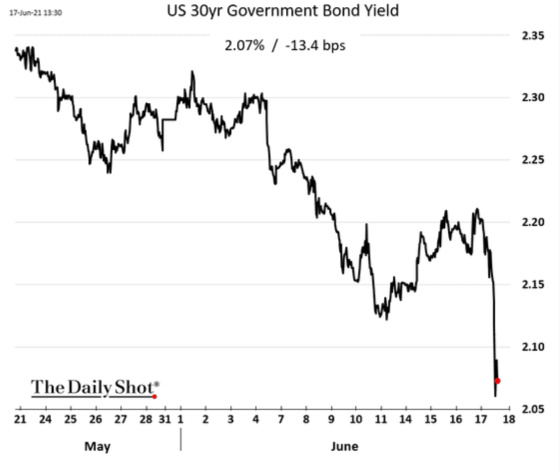 I pay close attention to the yield curve, especially the difference between 10-year and 2-year yields. When it is steep investors are pricing in faster economic growth and when it’s narrow or inverted they are projecting the opposite. After steepening quite significantly throughout most of 2020 and the bulk of 2021 it started to compress after the Fed’s meeting, albeit still at a relatively high level compared to the past few years. 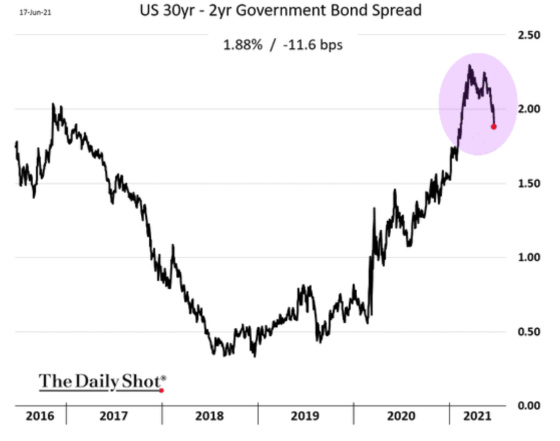 One can see on a longer-term basis, however, that the yield curve is not even close to previous peaks. If it is starting to roll over at this level then investors are starting to price in an economic slowdown which will make it more challenging for the Fed to tighten monetary policy.

This chart seems to corroborate the yield curve suggesting that the growth rate of economic activity may have peaked. 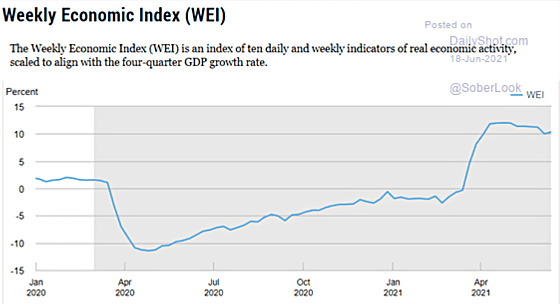 Inflation priced in by bond investors via break-even inflation rates for Treasury Inflation Protected Securities (TIPS) may be peaking. 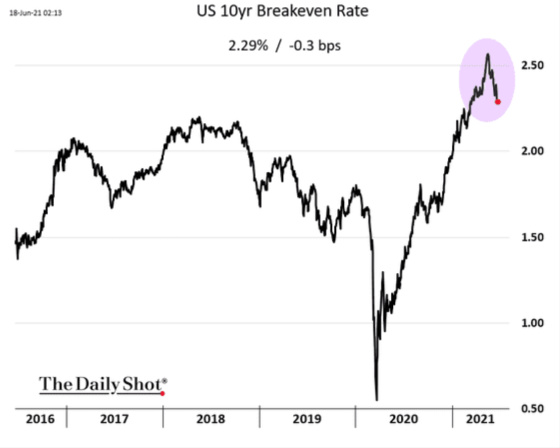 The Fed has been concerned that the Federal Funds Rate was going to drift below its target range. In order to help prevent this from happening it raised the rate, it pays on reserves held at the Fed by banks as well as for reverse repurchase agreements (RRP program) by 0.05%. This is what directly impacted the Secured Overnight Financing Rate that I discussed earlier. 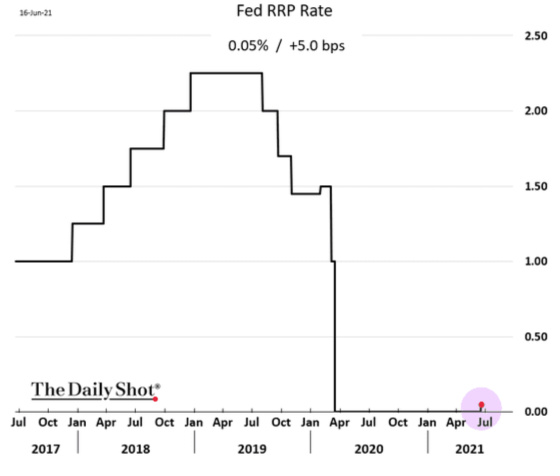 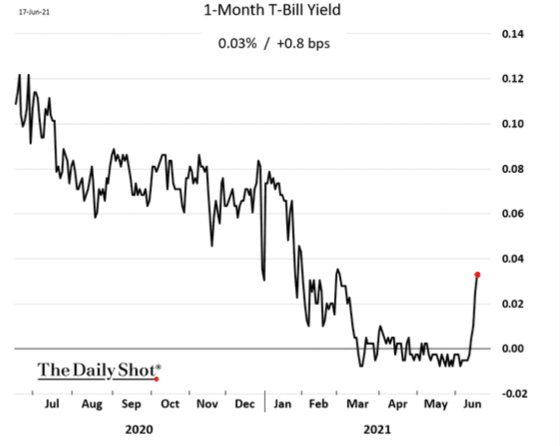 The Fed has been purchasing Treasury securities which has removed supply from the market. Yet, market participants still have a demand for Treasuries. To accommodate this demand the Fed allows certain institutions to purchase Treasuries from the Fed in exchange for these institutions depositing cash with the Fed. The Fed, in turn, agrees to repurchase these Treasuries the next day plus interest. Prior to raising the RRP rate to 0.05% it was 0.00%. In spite of receiving no interest, the RRP facility has seen a huge inflow of capital as the following chart shows. 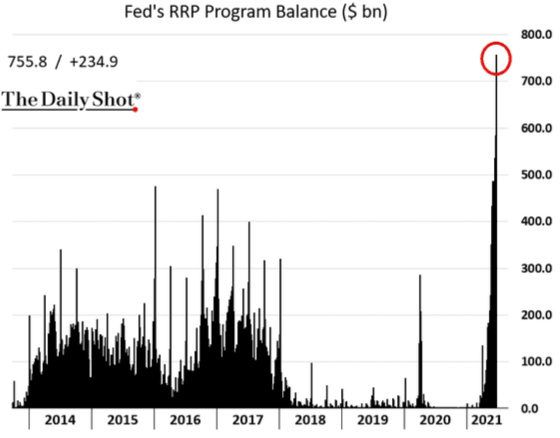 So there you have it. Last week was another very interesting week as long-term interest rates dropped and the stock market sold off on a more hawkish Fed, particularly those firms that benefit from more inflation and/or higher interest rates. Now that the Fed has started turning its sights to inflation and now seeing the labor market in a much more positive light, investors are reassessing the Fed’s reaction function which will have a less beneficial effect on the economy and asset values and may end up limiting how hawkish the Fed can be. Never forget that it’s almost impossible to divorce the observer from the observed.