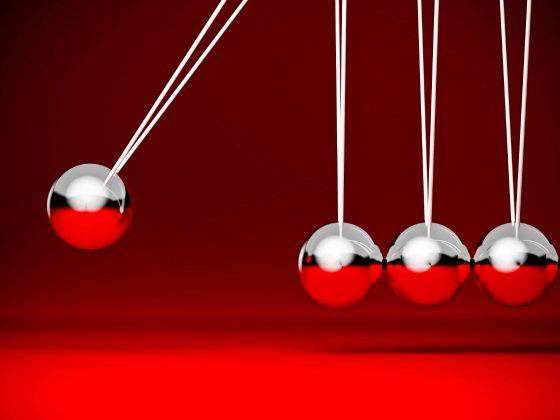 It’s been said that markets go up like escalators and drop like elevators. There is also Newton’s Third Law which states that for every action there is an equal and opposite reaction. This is where the Fed comes into play when markets drop like elevators. They often feel the need to act as an offset to market chaos to help bring stability back into the markets so that it doesn’t impact the real economy. And while many stock market indices have made new highs, there is one part of the financial system that has been experiencing a lot of instability. It’s the overnight repurchase agreement market which is very important to the financial system.

Financial institutions, hedge funds, and other investors often finance some of their operations through the repo market. They borrow overnight from entities that have excess funds and in turn pledge Treasury securities as collateral. The net effect is that these overnight loans should be risk-free. This market should operate very smoothly until something in the system goes haywire and then the plumbing can get clogged up. Unfortunately, this has been happening.

The following chart shows the Secured Overnight Financing Rate (SOFR). SOFR, according to the New York Fed “is a broad measure of the cost of borrowing cash overnight collateralized by Treasury securities.” It’s also the most likely index to replace Libor when banks are no longer required to submit their Libor estimates in 2021. Given we are large variable-rate borrowers with loans tied to Libor, we have a keen interest in this index (pun intended).

The following chart shows SOFR rates over the last year. All is generally quiet on the eastern front until quarter-end and on September 17th when it exploded higher.

The quarter-end issue stems from banks wanting to hoard cash for its quarter-end reporting while the latter seems to have resulted from a couple of large banks (primarily J.P. Morgan) not lending in the repo market at a time when some heavily leveraged hedge funds needed to borrow in it. The Bank for International Settlements (BIS) issued a report on December 8, 2019, which attempted to analyze the breakdown of the repo market in September and its causes. It’s interesting reading.

And while it looks like SOFR has been relatively steady with the exceptions pointed out above, this is only the case because the Fed has had to come in a big way to support the repo market with Treasury collateral to allow it to clear with minimal disruption and price volatility.

This next chart shows the size of the Fed’s balance sheet. One can see that it remained relatively constant from 2015 through 2017. The Fed started tapering through August 2019 and then beginning in September it has reversed course and expanded its balance sheet quite significantly to the tune of approximately $300 billion in about three months.

This is the equal and opposite reaction that has only just begun based on this headline from Zero Hedge. 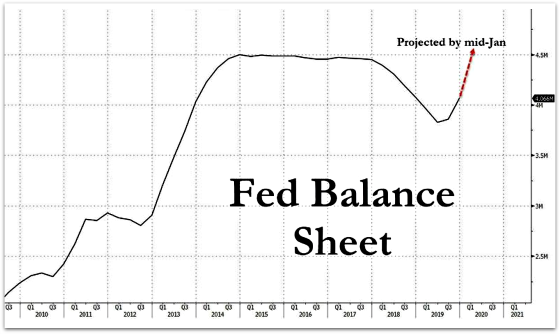 We’re going to be back to where we began when the Fed started tapering in 2018. What took approximately 20 months to reduce the balance sheet by about $600 billion will take about five months to fully reverse.

Anyone who thinks the Fed will bring its balance sheet back down to the $800 billion or so that it was at prior to the financial crisis and Great Recession is living in La La Land. If you feel like Dorothy when she said “Toto, I’ve a feeling we’re not in Kansas anymore”, then you are right. We are definitely not in Kansas anymore.

Although private, non-financial debt as a % of GDP has come down since the Great Recession, it is still nearly triple from where it was in the 1950s as the following chart shows.

We are way too financialized now and reliant upon debt issuance and credit market conditions to keep the economy functioning and growing. This means there is no escaping continued active Fed intervention to be the counter force in Newton’s Third Law when markets seize up and stop functioning due to heightened risk aversion related to perceived risks of lending to other institutions due to balance sheet constraints, liquidity needs, or repayment concerns.

From a CWS perspective, the question is whether we should have some level of comfort that the index our loans will most likely transition to (assuming Libor does get phased out) will be so important to the financial system that the Fed will do everything it can to make sure it functions reliably so borrowers do not get hit with payment shocks.

To try to answer this question I did some analysis of Libor versus SOFR using different ways of calculating SOFR based on a daily comparison of interest rate determination dates (last day of the month) versus Libor and then calculating SOFR using moving averages of 30, 60, and 90 days since April 3, 2018, when SOFR was first reported.

So what are the results?

The spread differential decreases as the SOFR moving average is lengthened. It also converts from SOFR trading at a premium to a discount which makes sense because SOFR is based on collateralized trades while Libor is unsecured.

What is somewhat surprising is that the standard deviation is the highest for the 90-day moving average SOFR. Upon further reflection, however, this cohort will always include the quarter-end volatility so that could be the reason for it being the highest. Interestingly, the spread between the extremes of the maximum differential and minimum differential narrows as the SOFR calculation length extends. They tend to cancel each other out.

As previously mentioned, while it makes sense that Libor would be higher on average than SOFR, the volatility experienced so far definitely adds more uncertainty to both borrowers and lenders. On average Libor borrowers don’t appear to be materially impacted by the change to SOFR based on the data so far. Beneath the surface, however, there is a lot more turbulence that will have to be managed if these trends continue. It also will require the Fed to continue to be the backstop for the repo market as that market will now take on an even more important role in the economy if Libor switches over to SOFR.

I will continue to monitor this very closely.