Much Ado About LIBOR 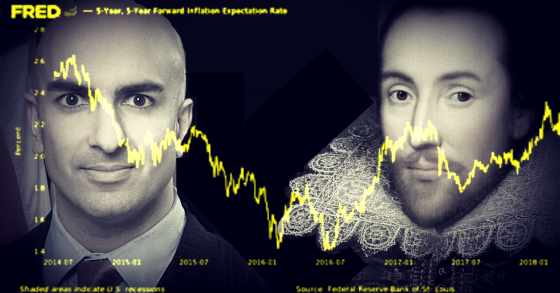 Last week my daughter and I went to see the Improvised Shakespeare Company in Los Angeles. Wow, what a mind-blowing experience that was. It was extraordinary to see the four actors take an idea thrown out to them by the audience and turn it into a 90 minute Shakespeare play. It started off with a soliloquy and then transitioned to multiple acts and ended with a song. It was an absurd, insane, hilarious, and fascinating experience to behold. So what was the title of the play that they put on? It was Much Ado About Zombies.

I highly recommend seeing this at least once in your life as it is a fascinating and entertaining look into the in the moment, spontaneous, creative process. I have such admiration for people who can think so quickly on their feet and cue off of others to continue the flow and improve upon it as well as take the content in a new direction. Of course, it is a lot like musical improvisation such as jazz and jam bands. And what does this have to do with Libor? Our floating rate debt focus has Libor as our reference rate and choosing to be floating rate borrowers significantly lessens our pre-payment penalties versus fixed-rate loans which then gives us the option to improvise when we see that conditions are changing (for better or worse) because we are not locked into essentially noncallable debt that we cannot get out of.

This ability to improvise is an important trait for successful businesses. Slack just went public and is a perfect example of how improvisation can payoff. Accel is a very successful venture capital firm. A decade ago they led the seed round by investing $1.5 million in a gaming company called Tiny Speck. The game was a flop and they discussed returning the investors’ money. Accel partner and Slack board member Andrew Braccia told Slack’s founder that he was investing in the team and had confidence in them that they could successfully pivot the business. Braccia articulated the importance of remaining flexible, particularly early on, when he wrote the following on the Accel blog:

“Slack is a great reminder that the most interesting companies are often the ones whose courses aren’t easily charted. The commonalities between those companies start and end with the drive, creativity and resilience of their founders and early team members.”

A couple of weeks ago I showed a table about what happened with LIBOR on one particular day as it dropped fairly significantly. I thought that day was significant and monumental given the size of the move but does not compare to what happened last Thursday. Take a look at this table. This is the market screaming that the Fed will be cutting rates.

Jay Powell delivered what the market was looking for, which was a dovish Federal Reserve. The market is now placing about 100% probability that they will cut rates in July. There was one dissenting member who thought they should cut rates at the June meeting and he favored that because the Fed has not reached its inflation target for many years now and inflation expectations are being lowered by investors as the following chart shows.

Minneapolis Fed president Neel Kashkari, who was a former executive at PIMCO and very sophisticated in his market knowledge, said he would have lowered rates by 50 basis points at the June meeting. Since he is a non-voting member his point of view is interesting but he can’t vote so it’s not as valuable as those of voting members. With that being said, I admire his flexibility as he said on May 31st that “he was not quite there yet” on the need for the Fed to cut rates. It sounds like he would have been a good member of an improv troupe as he has turned on a dime. Flexibility in improvisation is the name of the game and is necessary as an investor at times as well. To paraphrase Keynes, if the facts change, then you should change with them and I admire him for not thinking he was more knowledgeable than the markets, especially the deep and liquid Treasury and Eurodollar futures markets. So we are going to see lower rates.

Our focus on remaining flexible with our debt by emphasizing floating rate loans should start to result in lower interest payments as the lower longer-term rates that appear on the table above start filtering into lower short-term rates. This is the case since 30-day Libor won’t move materially until we get closer to the next Fed meeting whereas the longer-dated Libor tranches are already factoring in rate cuts.

So there really is much ado about LIBOR as the table above shows in that the various tranches are not acting like zombies now that the Fed is going to cut rates. The Fed is now pivoting from the low unemployment rate being the driver of its interest rate policy to now focusing on the continued undershooting of inflation, lowered inflation expectations, and lower oil prices. I think the narrative that investors are telling themselves is that the reaction function of the Fed is now inflationary undershooting, even if historically speaking based on the labor market you would not lower rates.

I will leave you with one last chart that I have been paying close attention to 10-year German yields. They have hit record low levels.