Will The Fed Slash Interest Rates? When the Levee Breaks 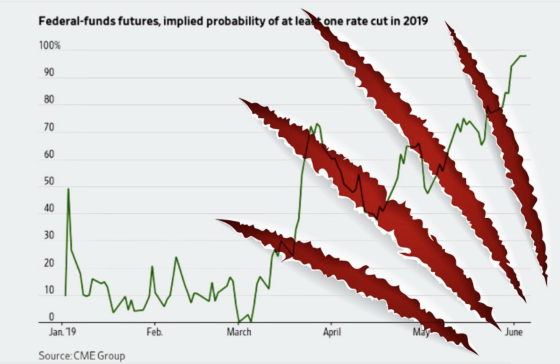 As the following headline shows, interest rates fell quite sharply on Friday to current cycle lows in the wake of a very weak non-farm employment report. 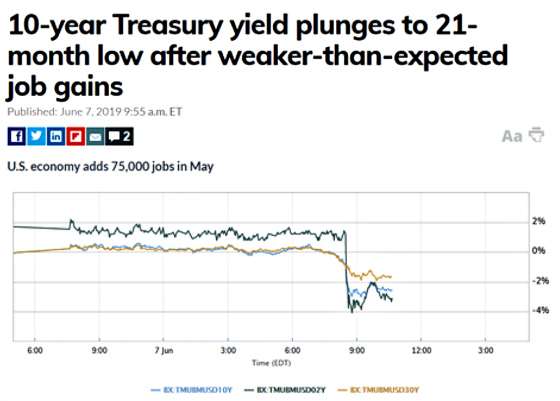 One can see how inverted the 10-year Treasury note yield has become versus the 3-month T-bill yield in the following chart.

As big variable rate loan borrowers, most of our loans at CWS are tied to 30-day Libor. All we really care about is whether Libor has followed suit or will do so. It has started to drop a bit on the short end which makes sense because it won’t start to move until the Fed is very close to adjusting rates since this is a 30-day instrument. On the longer end of the curve, however, it has been moving down rather aggressively as the following table shows.

And while for the impatient borrower who sees the long end of the curve dropping and barely any movement on the front end this can engender frustration, for the student of history one recognizes that patience is necessary as the long end movement is foreshadowing lower short-term rates. One just needs to keep calm and have some patience and it will work out.

The market has now moved to pricing in at least one rate cut in 2019 with nearly 100% certainty. 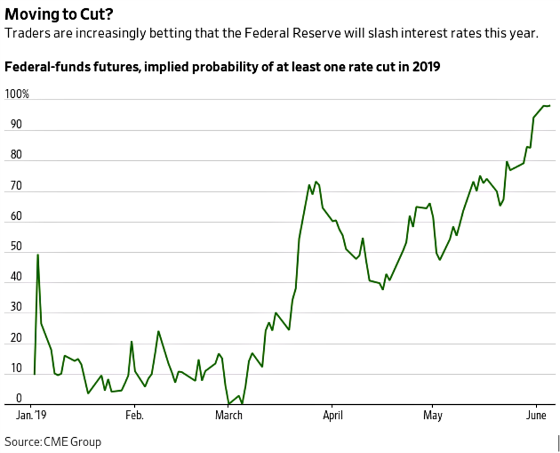 Looking out further to the June 2020 Fed meeting the market is pricing in more rate cuts as the following chart and table show. 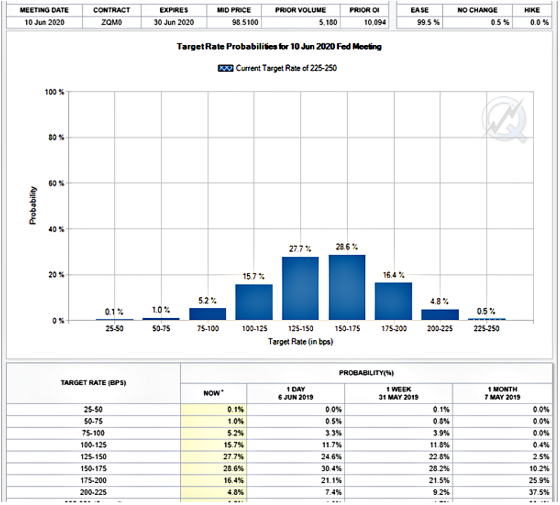 This is what we have been waiting for at CWS as we have approximately 75% of our financing being floating rate. If rates were to drop by 75 basis points then this would translate into approximately $18 million in annual interest savings in one year compared to our annualized payments as of today. This would lower our average interest rate to approximately 3.42% for our floating rate portfolio. And if rates stay that low then those savings grow as they represent annual savings and not just a one time benefit.

To put this benefit into further perspective and why we like the flexibility that floating rate loans provide due to manageable prepayment penalties, I will use some data from a refinance we did of 11 properties that took place in December 2018. The average floating rate at closing was 3.75% while the fixed rate equivalent was estimated to be 4.14%. We started off with a minor 39 basis point advantage. Unlike fixed-rate loans, however, our floaters allow us to capture future reductions in Libor (which we thought were far more likely than increases) while retaining pre-payment flexibility. Thus, if rates do drop by 75 basis points then our cost advantage over the fixed rate equivalent loans will increase to 114 basis points, which is quite sizeable and gives us a strong financial cushion in the event of an economic slowdown and a more challenging apartment market. 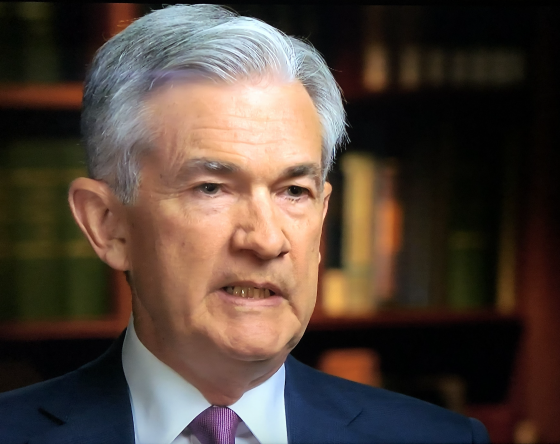 I will conclude by saying that people need to accept that low rates are the new normal and that unconventional measures by the Federal Reserve are not going away. You may not agree with it and think it’s doing more harm than good, but this is the reality.  This was recently acknowledged by Fed Chairman Powell in a recent speech in which he said the following (ELB stands for Effective Lower Bound or 0% rates):

The next time policy rates hit the ELB—and there will be a next time—it will not be a surprise. We are now well aware of the challenges the ELB presents, and we have the painful experience of the Global Financial Crisis and its aftermath to guide us. Our obligation to the public we serve is to take those measures now that will put us in the best position deal with our next encounter with the ELB. And with the economy growing, unemployment low, and inflation low and stable, this is the right time to engage the public broadly on these topics.

In short, the proximity of interest rates to the ELB has become the preeminent monetary policy challenge of our time, tainting all manner of issues with ELB risk and imbuing many old challenges with greater significance. For example, the behavior of inflation now draws much sharper focus. When nominal interest rates were around 4 or 5 percent, a low-side surprise of a few tenths on inflation did not raise the specter of the ELB. But the world has changed. Core inflation is currently running a bit below 2 percent on a trailing 12-month basis. In this setting, a similar low-side surprise, if it were to persist, would bring us uncomfortably closer to the ELB. My FOMC colleagues and I must—and do—take seriously the risk that inflation shortfalls that persist even in a robust economy could precipitate a difficult-to-arrest downward drift in inflation expectations. At the heart of the review is the evaluation of potential changes to our strategy designed to strengthen the credibility of our symmetric 2 percent inflation objective.

It appears that the levee has broken with trade tensions impacting global economic growth and negative rates in Germany and Japan keeping a lid on U.S. rates such that a reduction in short-term rates is on the horizon. We have been waiting for this to take place after they started their long climb higher beginning in early 2015 and then doing so more rapidly beginning in 2017.

We are now at the point where the probabilities of future rate cuts are quite high and we are well positioned to benefit from this at CWS.