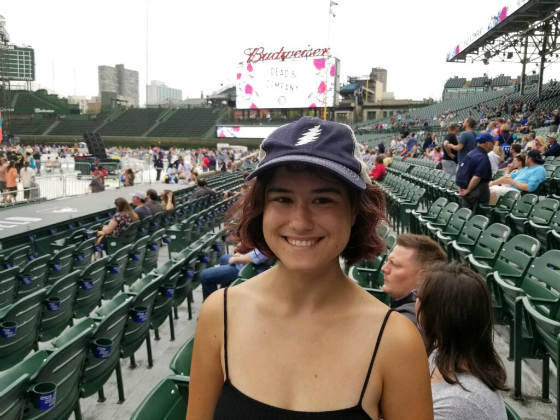 From time to time Ariella and I engage in some very deep conversations which I always find so enjoyable and stimulating. In light of these interesting discussions, she thought we should consider having a podcast and call it Pop Philosophy. Maybe this will launch a new category called popcasts. This past weekend was a trifecta of joy and pride as we celebrated her amazing accomplishment of graduating from the University of Chicago, the place where fun goes to die, while having a multitude of friends and family join us in the festivities, and, to top it off, Ariella and I went to the Dead & Company show at Wrigley Field. 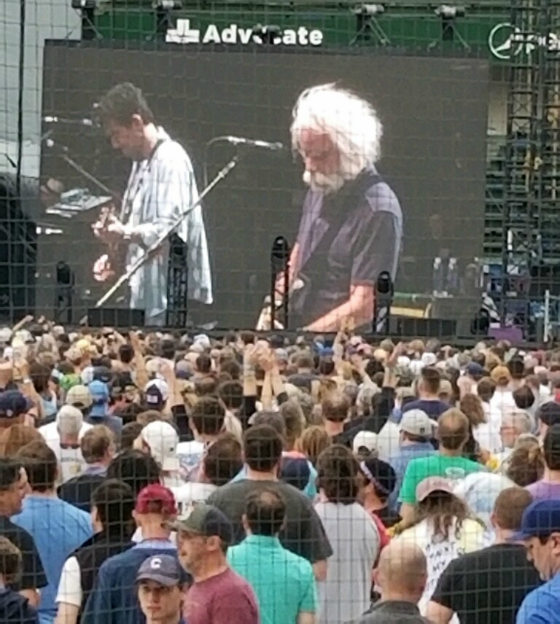 Last year I took Ariella to her first Dead and Company concert at Dodger Stadium. Despite enduring tremendous heat, we made it through no worse for the wear and she said she had a great time. About six months ago she asked when we were going to see them again and I said they were going to announce their summer tour soon so hopefully we could see one of those upcoming shows. As luck would have it, her graduation was on June 15th and they announced that they would be playing Wrigley Field on June 14th and 15th so I immediately jumped on getting two tickets for the first show. And while my family and friends met to dine on Chicago pizza, Ariella and I went to the show. We had a great time. And while the temperature was much more comfortable, it did end up raining a fair amount. We proved to ourselves that we can brave the elements for Dead & Company.

Now let’s return to Pop Philosophy as I want to share what I would have said in my speech at the graduation dinner we had on Saturday night had I had more time. I remember writing a post about advice I had for her when she went off to college (it went a little viral on Twitter as a person with a very large following said it was one of the best things he had read that day) and it’s hard to believe four years have gone by and it was now time to provide some advice and observations to my now graduating daughter. 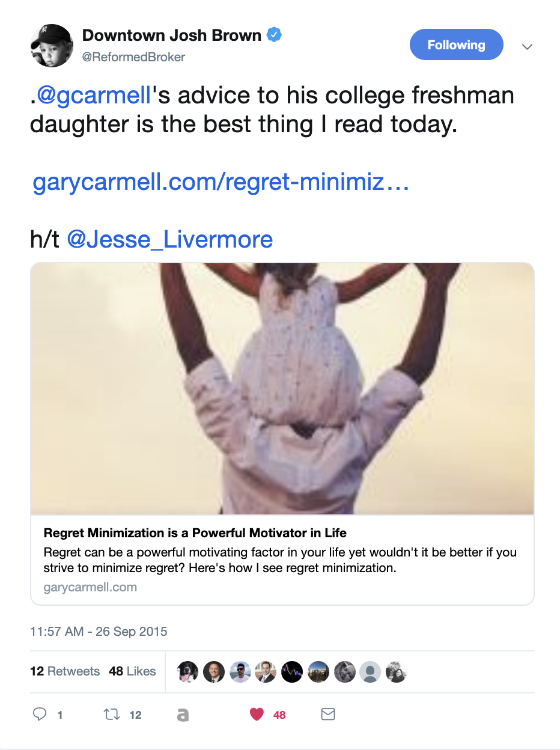 As your father (and benefactor) I feel as if I have some poetic license to reflect on your four years at UChicago and to give you some advice as you embark upon the next phase of your journey. And while I wish I could say that the main message of my speech was derived from original thinking, this would not be truthful. So what is the source of my great wisdom? It’s actually relatively recently acquired from an interview that Howard Stern did with David Hasselhoff.  And what did David say that has continued to resonate with me? First of all, let me say that he has some street cred with me as he has had a remarkably successful career as a star of Knight Rider and Baywatch, great financial success as one of the owners of Baywatch, and a very big career as a pop star, particularly in Europe.

Howard asked him about his success and what he attributes it to and he said that it’s a byproduct of his philosophy which is “See it, believe it, live it”. I think there’s a lot to be said for that but, and this is where I put my spin on it, it requires a bit of a twist.  While it flows smoothly and definitely has a positive psychology emphasis, I don’t think it’s quite as simple as he makes it out to be.

I agree with step one and the power of visualization. If we can form a detailed image in our mind about what a future state may look like then manifesting it becomes a bit easier. Where I take some exception, at least early on in life, is putting believing ahead of living it. I think that belief comes from confidence and faith and that these can only really occur once you’ve actually experienced life and have taken chances and built up the muscle of courage. Through courage comes confidence and from confidence can come believing in yourself, what you’re capable of, and your willingness to take chances. I don’t think you can get there without diving into life and going all in and being fully invested. It also requires getting knocked around a bit and getting back up to build up resilience so you can persevere when times get tough and makes it less daunting to take on new challenges.

And that this is where I turn it back to Ariella. 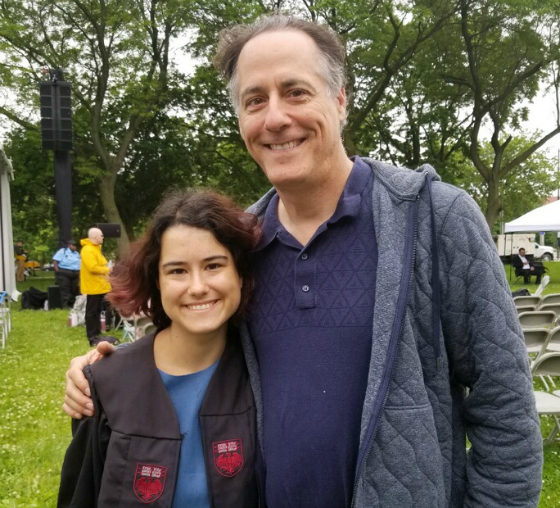 You have seized so many opportunities to become actively engaged in life and that is what makes me so proud of you. Of course, I’m quite pleased with how well you have done academically and the amazing number of accomplishments and accolades you have achieved. To me, these are representative of you having been so invested in life. And part of life is dealing with the inevitable challenges that come with being human. You managed through a difficult first-year roommate situation and paid the price for acting on a dare that later came back to have ramifications that could have been problematic. You came out a little bruised but also wiser as a result. You were involved in relationships, one of which you ended, and the other which left you heartbroken for an extended period of time. And while that was painful to watch as a parent, I am so proud of how you handled that too. It turned out that all of your roommates had relationships end at the same time and this gave you the opportunity to bond with them in very deep ways such that you have formed life long friendships. You were a little lukewarm on Jewish life when you entered UChicago but now you seem to be much more open and receptive to it. And much to my surprise and counter to most college students, you came in somewhat militant in your social and political views and you are leaving with much more of an open mind and moderation in your point of view. You now regularly exercise, had two great jobs over the summer, traveled to Europe twice, and you’re headed there again.

You went deep into your craft of writing and you produced plays, a television show, a screenplay, poetry, you worked on a school publication, and you won a writing fellowship that will be the focus of your time and energy for the next year. There is more but I don’t want to sound like an obnoxious bragging parent. I am just so proud of you and love that you have found something that feeds your soul.
Embed from Getty Images
Before I talk about mom, I just want to say I always think about how similar you and papa were and how much joy you would have brought him discussing books, movies, philosophy, and life. Your papacast would have been immensely more interesting than our popcast. And to think you went to school in Chicago and he wasn’t here to relish in that is one of my life’s great regrets.

I don’t know where you would be without your writing because you and Jacob have experienced an inexplicable tragedy that robbed you, and all of us, of the matriarch of our family, the force that moved us all forward, a woman who was so full of love, laughter, light, and heart.  She was our sun around who we revolved. And if we had any notion of trying to slip out of our orbit, her gravitational pull was too powerful to allow for this to be a permanent state of affairs. What happened to her is something that I will always have difficulty coming to terms with or understand. All we can hope for is to do the best we can to move forward with our lives and take her spirit with us and have her help guide us into taking the next right action. 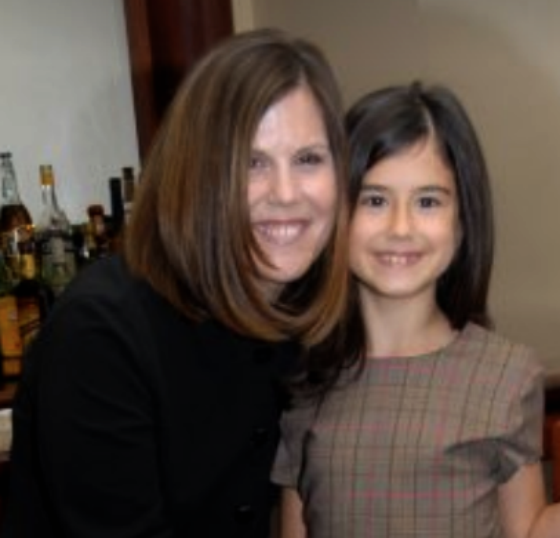 I am so proud of you and how you have attempted to process the loss.  Not that you’re over it by any means, but how you are integrating it into your life.  You’re not afraid to talk about it and you’re open about sharing your emotions and feelings. These are feelings that range from deep sadness to see the absurdity in it, to anger, regret, laughter, nostalgia, and a host of many others.  I so appreciate your openness and willingness to share with me because it helps me process the loss as well.

Mom was so so proud of you. She always talked about how you were born to write beautiful stories and she also thought and sensed that somehow you would integrate Jewish life and culture into your world of writing and your life and your forthcoming trip to Israel, which includes a family wedding and studying at the Pardes Institute in Jerusalem, would have made her so proud. I also think she would have been happy you’re going to Poland but probably not as open to it as I am.  This is where having a new sheriff in town makes a difference because I don’t think she would have been too thrilled with you going there alone. I know this is something you want and feel the need to do. I can relate to that and I trust you and honor your wishes and your intentions as I only want the best for you. I know that these experiences will be incredibly formative and will grow your courage.

I hope you keep seeing this beautiful world and feel the awe and wonder it can engender and keep investing in yourself, your capabilities, and your relationships, and by doing so, you can continue to believe that you can conquer any challenge and make a difference in the world. Mom always believed and you and still does. Keep making her proud.

2 comments on “Pop Philosophy & David Hasselhoff: My Tribute to Ariella”