Housing - No Bubble but Hitting a Wall? 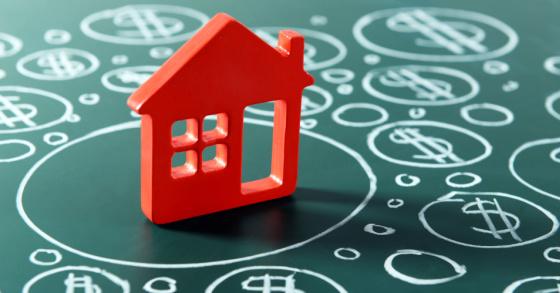 Given how hot the housing market is there are understandable concerns as to whether we are in a bubble. Bloomberg Businessweek had a good article addressing some of these concerns that included some interesting charts.

This first one shows how the cumulative appreciation over the last five years has matched that of the bubble years of 2002-7. Most of the gains have occurred in the last 12 months as appreciation has accelerated greatly.

This has led to a tremendous increase in home equity in a very short period of time.

Unlike the previous cycle, this one is not driven by easy access to credit and loose lending standards. This chart shows how mortgage availability has been much tighter than in the mid-2000s. This is the primary reason why I do not think we’re in a bubble that will lead to any sort of crash in housing prices.

Although conventional loans represented 81% of all loans originated in April, only 37% were for purchases.

As apartment owners, we are more interested in purchase activity and the financing market for those individuals since they represent more immediate competition for apartments. FHA (79%) and VA (69%) have a much greater percentage of their April originations tied to purchases as opposed to refinances. Their terms are less stringent so it’s important to see the quality of their borrowers. The following table shows that their FICO scores are lower and loan to values are significantly higher for FHA loans. This is not surprising as FHA tends to cater to first-time home buyers.

In spite of the rapid appreciation that has taken place, homes remain relatively affordable on a historical basis, particularly compared to the bubble years.

One can see how rates have come down significantly since late 2019 through early 2020 which has given consumers more financial power to buy a home and to save on their monthly payments by refinancing their mortgages. 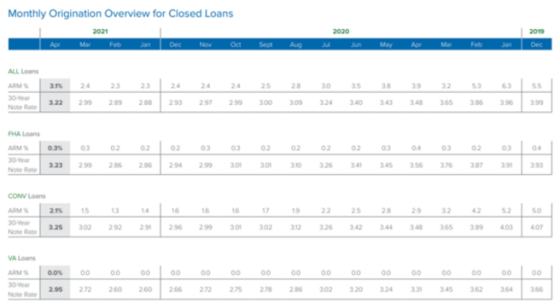 The drop-in rates, combined with the increase in demand coming from Covid leading people to seek more space in more affordable, higher quality of life suburban and vacation areas have created a strong supply-demand imbalance.

Another reason why I don’t think we’re in a bubble is that we are still not producing enough housing relative to the size of the population.

One can see that homeownership rates have increased for those 55 and older and dropped for younger age cohorts. 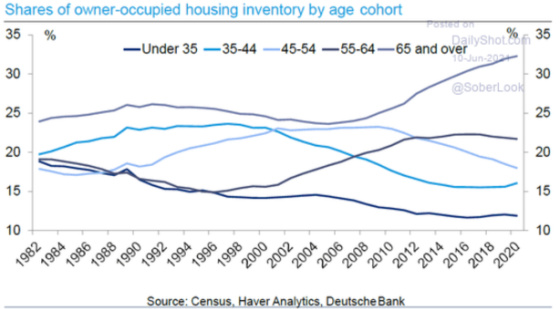 Millennials are starting to increase their home buying and their numbers are growing in terms of reaching the years in which people tend to buy their first homes. As a result, the supply issues are only going to be more magnified. This is from the Bloomberg Businessweek article.

One reason to expect things won’t loosen up right away is that the tightness has been years in the making. Having overbuilt in the 2000s, chastened homebuilders underbuilt in the 2010s, according to a calculation by Burns of the number of housing units added per additional adult in the U.S. population.

And now millennials, the largest generation, are reaching their peak homebuying years at a time when starter homes are in the shortest supply. On June 7, Bank of America Merrill Lynch estimated that only 65,000 starter homes were completed in 2020, less than a fifth the number built annually in the late 1970s and early ’80s.

If supply is not going to trigger a material problem for housing and lending standards remain conservative then cracks in the armor should appear via higher mortgage rates and/or prices getting high enough to lead to a buyer’s strike.

From an interest rate perspective, one would expect there to be a lot of concerns about them going higher given inflation has risen rapidly. 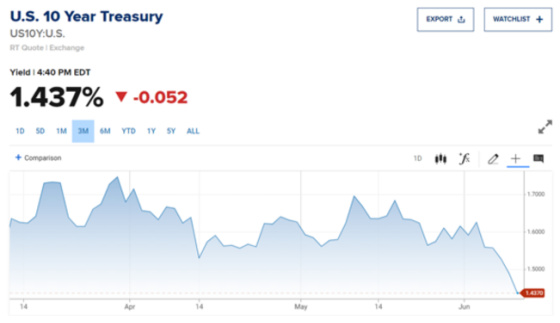 One can see that interest rates are incredibly low relative to inflation when compared to historical trends. 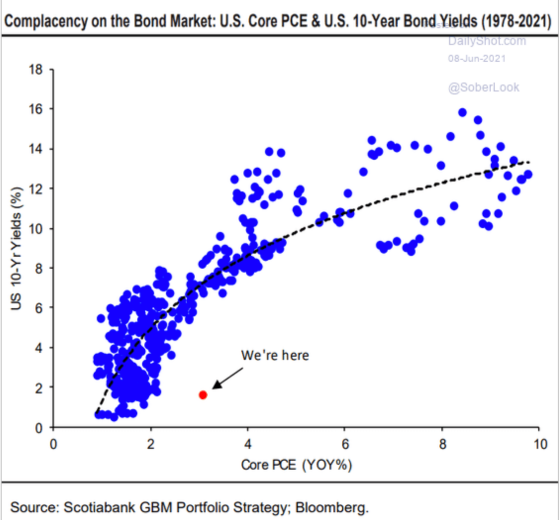 The following chart shows that bond market investors are pricing in transitory inflation, believing that it will come down in the medium to long term. 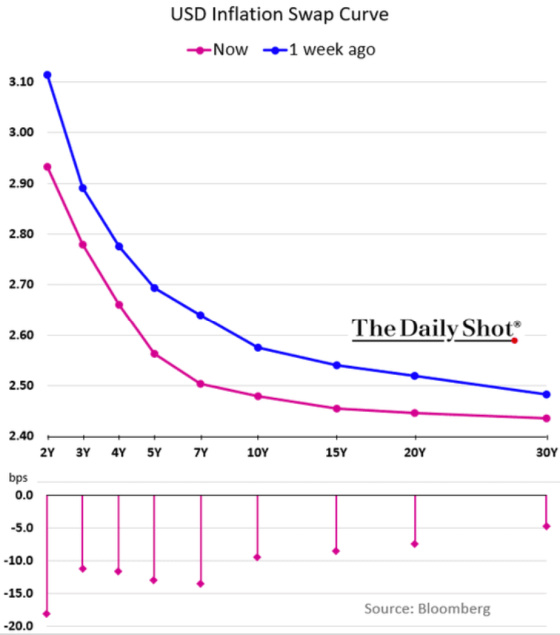 It would appear that part of the impetus for lower yields is due to investors being positioned for higher rates and they may be caught short which necessitates purchasing Treasuries to cover their short positions, thereby lowering rates more than they would otherwise drop.

Perhaps the bond market has priced in the cyclical growth rate of the economy peaking?

And now let’s throw China into the mix and we have more supporting evidence (based on historical correlations) that Treasury yields could fall further. 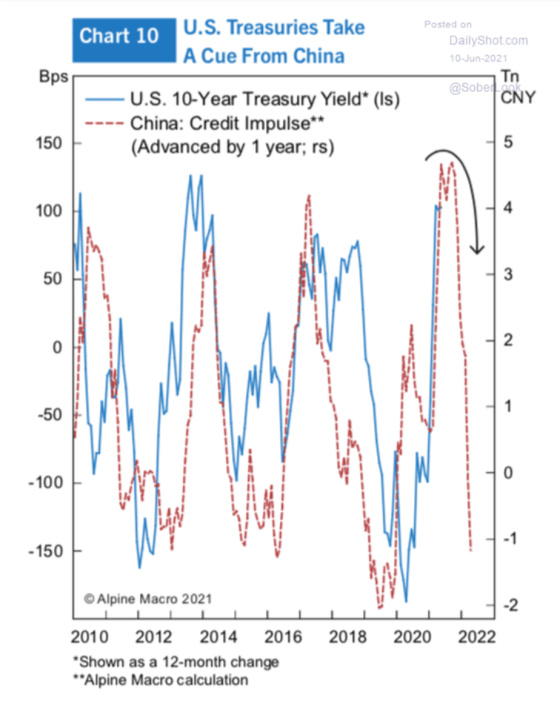 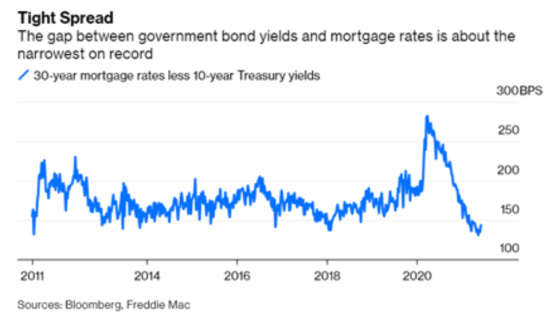 With the run-up in prices for homes and the difficulty in purchasing them, consumer sentiment has dropped noticeably when it comes to new home buying. 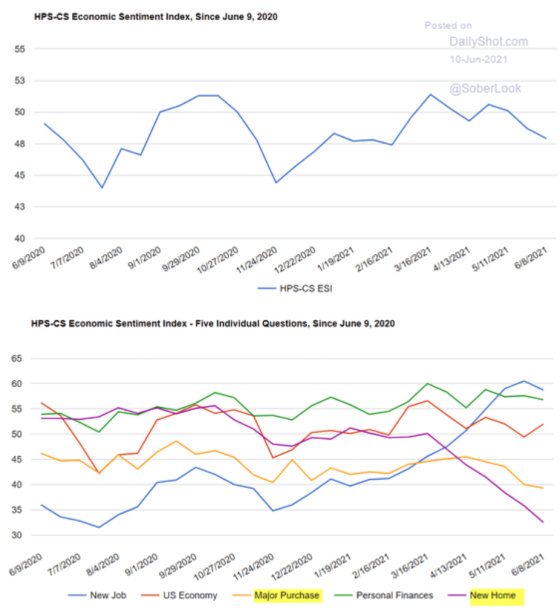 There is understandably some concern that once unemployment benefits start being reduced the economy will feel the impact of it and this could possibly ripple into the housing market.

The following charts show the dollar value of these benefits and their trajectory. 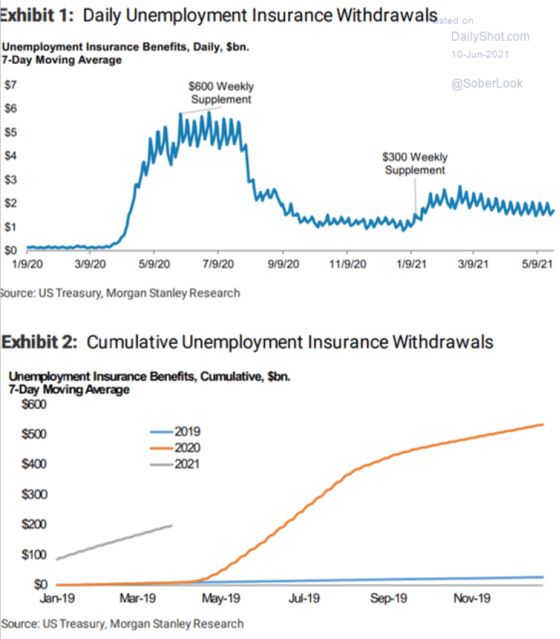 One can see how we are seeing peak stimulus and, absent any legislative changes, we will have a material dropoff over the next six months. 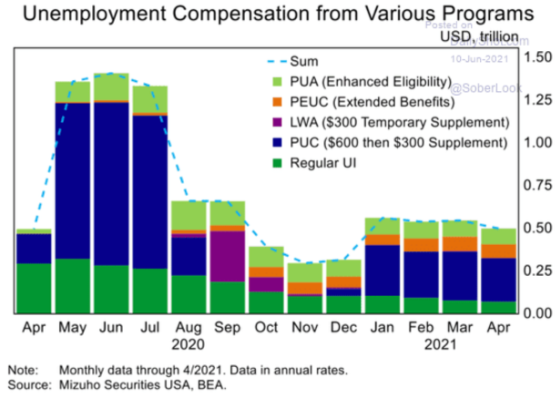 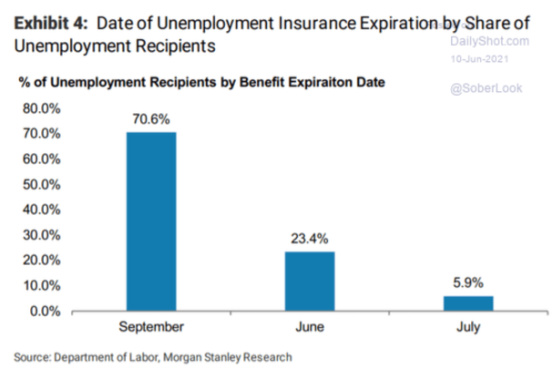 Let’s not forget about Covid.

I must admit that I am feeling far more confident about not getting Covid but we shouldn’t lose sight of the fact that it’s still very present in other parts of the world and is having another concerning wave in the United Kingdom. 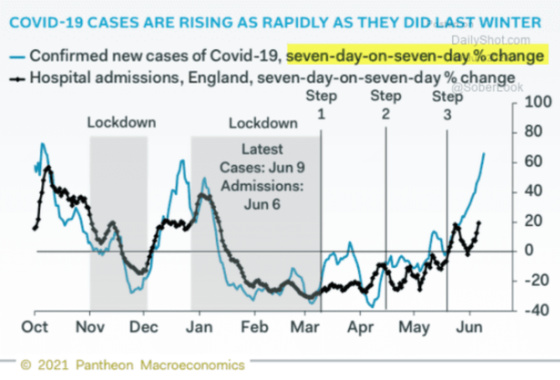 And it is still killing a huge number of people around the world. 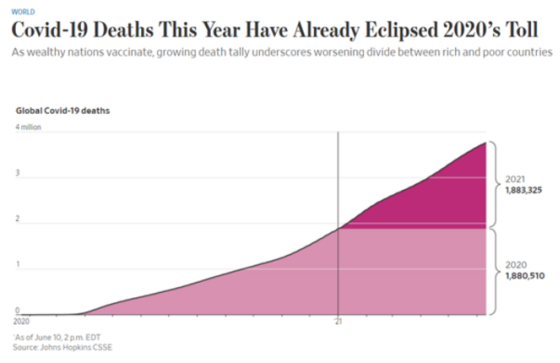 While I think that housing demand may start to hit a wall given the high prices and conditions being optimal from an interest rate perspective and Covid stimulating large, unanticipated demand, I am not concerned that we are in a bubble that will pop and lead to major problems for the economy. I think we will see the rate of appreciation slow such that in 12 to 24 months we will see home values grow more modestly. With that being said, if one has a long-term ownership horizon (7+ years) and you’re buying in growing, dynamic areas with some supply constraints, I think the odds of losing money are not material.