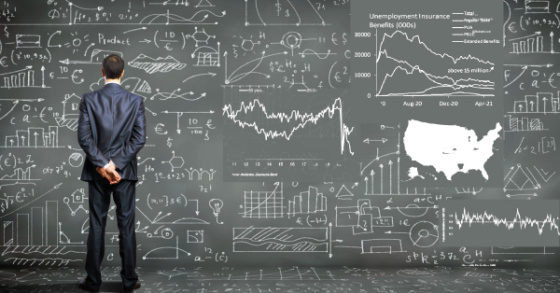 I have been turning to charts more regularly for my weekly blog posts than I have in the past. Like most people, I see many of the challenges and price pressures resulting from the massively disrupted global supply chain. It shows up in terribly unreliable contractors (I’m having a pool built so I am experiencing this first hand) and the significant increase in the cost of materials that are leading to the rationing of some goods like plywood and even chlorine. And, of course, it is showing up in the very hot housing market. And yet it still isn’t showing up in some of the inflation metrics the Fed looks as evidenced by this chart. 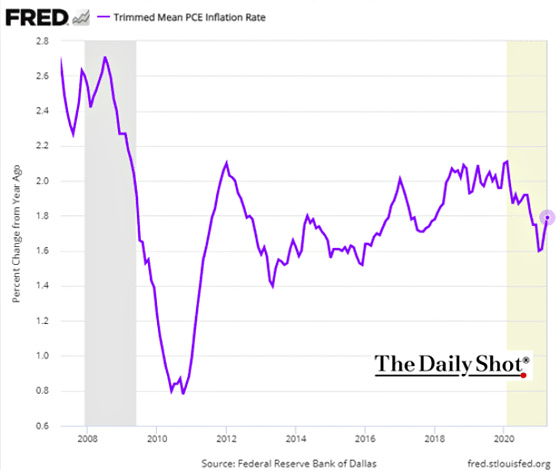 I am always trying to ascertain what the Fed’s reaction function is to help me determine what might trigger a movement in short-term rates. As a result, I follow a lot of different types of data to see if something might trigger a movement in rates that would impact our cost of capital since we are predominantly a borrower that uses variable rate financing. In addition, I’m also very interested in studying the housing market and how it may impact the demand for apartments in our markets as well as the supply. And while it’s very rare that we add or exit markets in which we’re invested, it is also important to know if migration and growth trends are changing that would trigger an evaluation as to whether we should exit markets, add new ones, or overweight or underweight existing ones.

These chart-oriented blogs have been generated to primarily help me determine if the Fed will move sooner than the beginning of 2024, which is the earliest they said they would adjust rates.

So let’s turn to the data that I was focused on last week.

One can see that shortages are a prominent topic in the recently released Fed Beige Book. It’s never been mentioned so often as it was in the latest report as compared to the last 13 years. 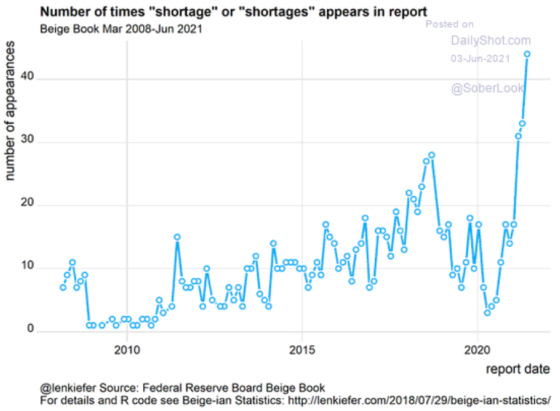 Shortages and delays go hand in hand. Delivery times have slowed down materially. 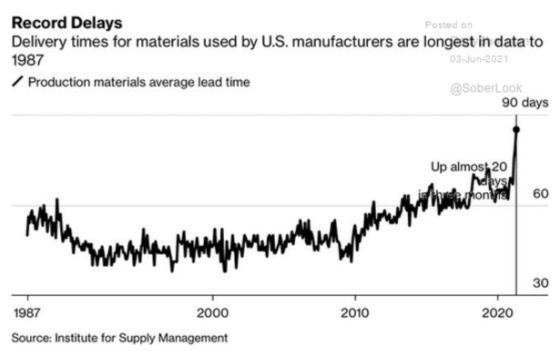 Interestingly, the valuation of companies in industries that would seemingly prosper from inflation is relatively depressed. Either the market is significantly mispricing these firms or investors don’t believe the pricing power and/or growth potential of these industries will hold in the long term. 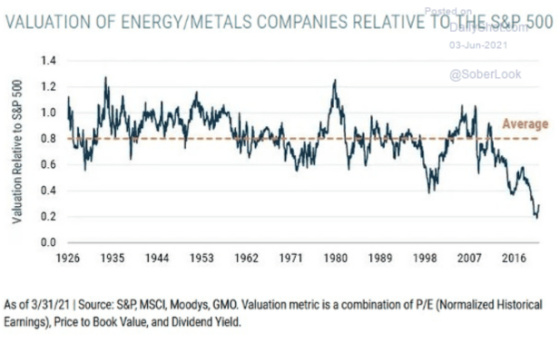 24 states are going to be stopping the payment of federal supplemental unemployment benefits over the next month. The belief among these governors and legislators is that people are being paid too much not to work and that is creating an unnecessary shortage of labor. 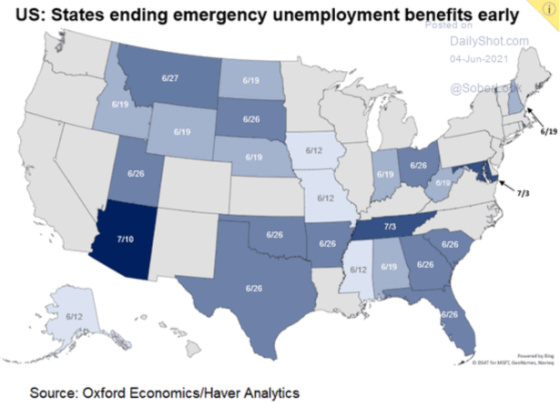 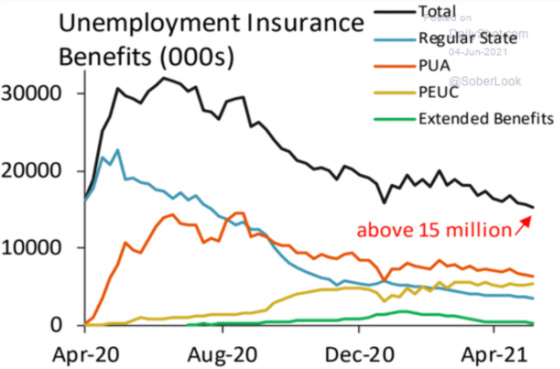 Long-term unemployment is becoming an increasingly problematic issue. It will be interesting to see if this starts to drop once unemployment benefits start to be cut back. 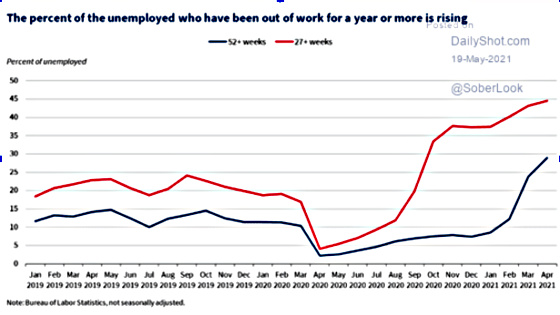 There has been a significant drop in the labor force participation rate of people 55 and older since Covid. Perhaps many will stay retired after being laid off because they have found retirement, albeit forced in many cases, to be a net positive for them. As with the other indicators I’m looking at it will be interesting to see if this starts to reverse with the curtailment of unemployment benefits. 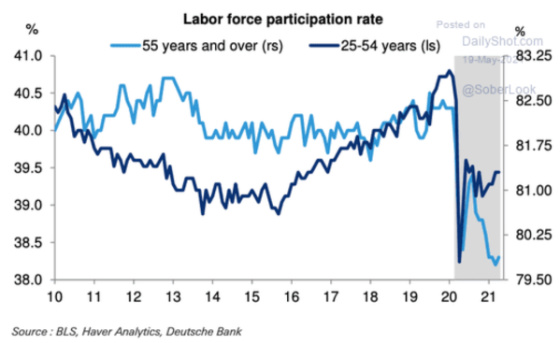 Not everyone agrees that the acute shortage of labor in some industries is due to generous unemployment benefits. Some economists believe other factors are at work, particularly the need for mothers (and some fathers) to be home for childcare. The following chart shows how this is a real issue for many. 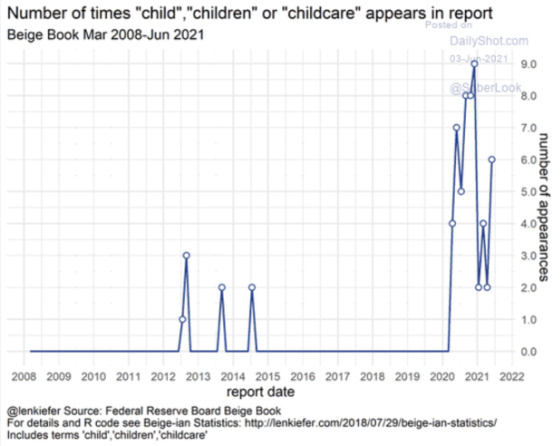 It does appear that for those who want a job there are ample employment opportunities as this chart shows. 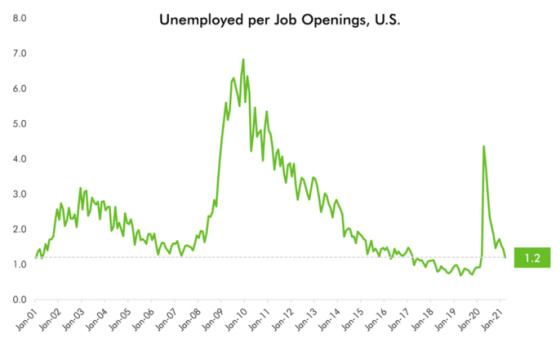 Job search activity has been steadily increasing such that it is now back to 2019 levels for this time of the year. 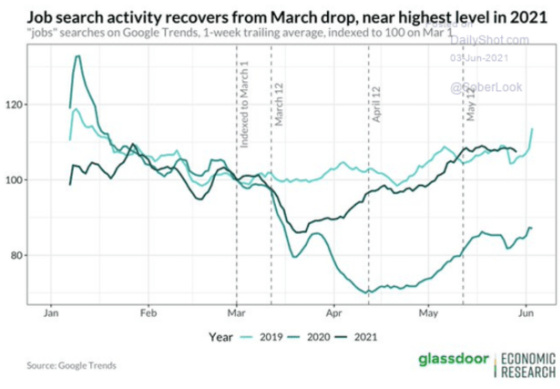 The non-farm payroll report for May showed continued labor market recovery, but still less than expected. Wage growth was muted as the charts after this one show. 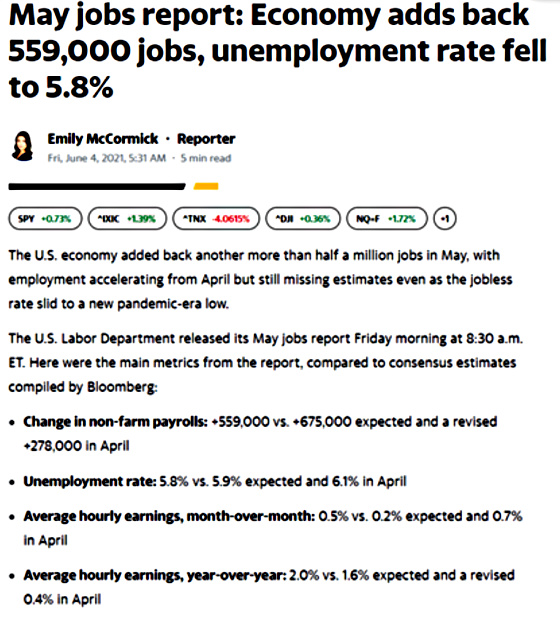 The bond market took this report to be dovish in terms of economic growth and the Fed remaining on hold. 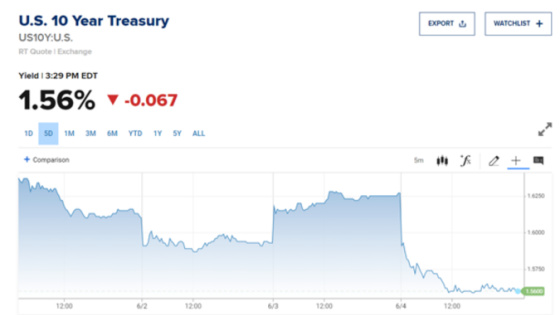 Wage growth has not accelerated in spite of the improving labor market. In fact, it is starting to decelerate. 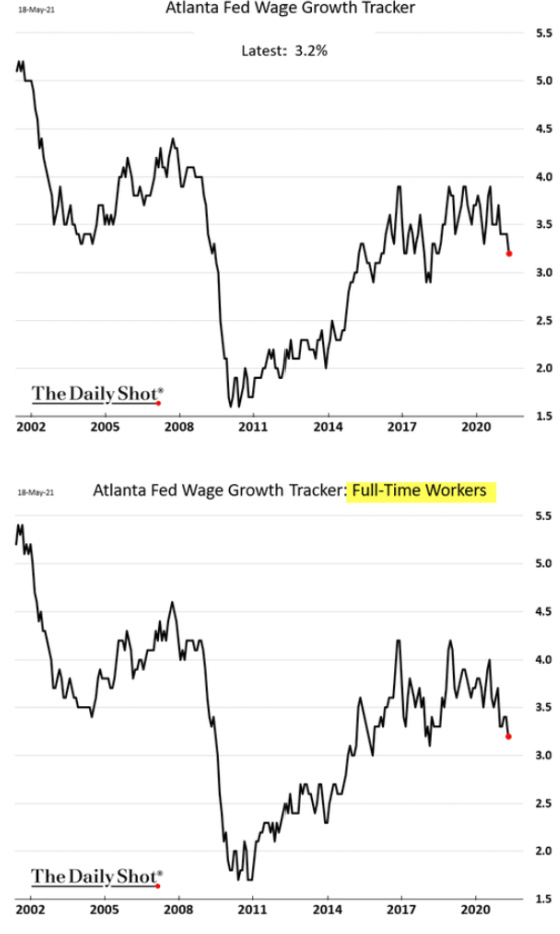 This chart speaks to the possibility that the recovery in aggregate earnings relative to jobs is related to higher-wage jobs being created and/or those people who have jobs seeing their earnings going up at a rapid clip. 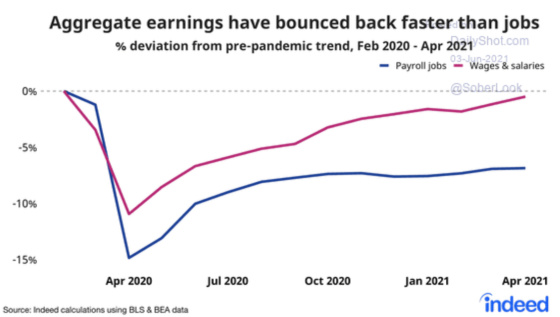 The auto industry is hugely important to the economy. It looks like sales may have hit a peak but only time will tell. There are also inventory issues related to the shortage of semiconductors which will presumably impact sales levels over the next 6 to 12 months. 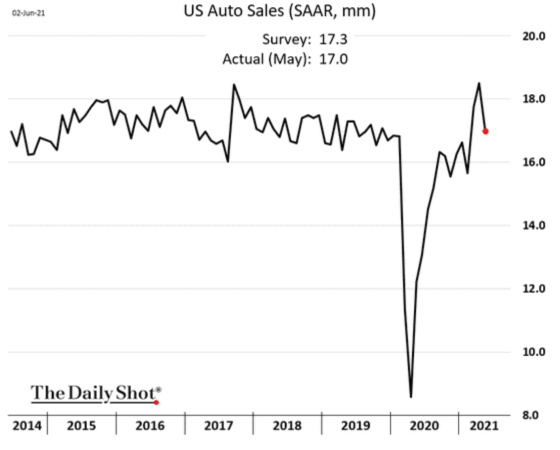 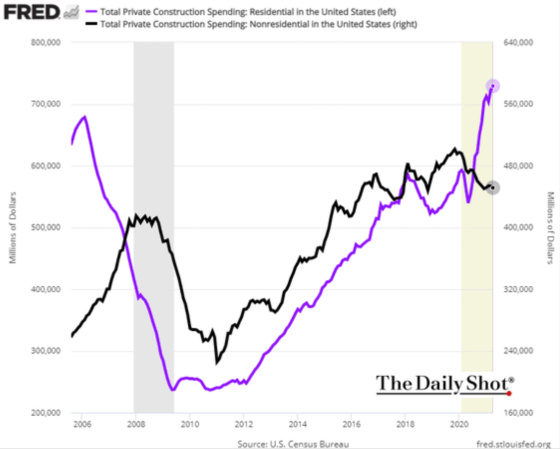 Interestingly, California, which has had very strong appreciation in home prices, especially relative to the rest of the nation…. 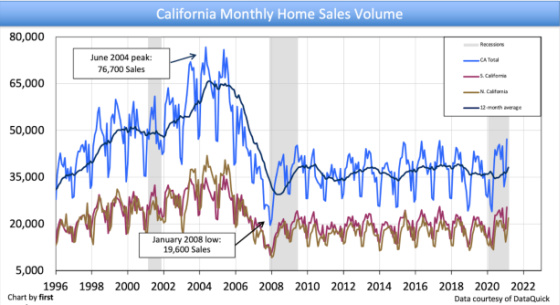 As I have been writing about over the last few weeks, my sense is that we may have reached a peak in terms of annual appreciation for this cycle and Corelogic seems to share the same belief as it is forecasting minimal appreciation one year from now. 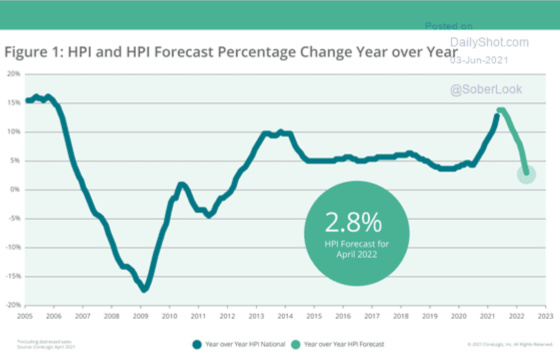 So there you have it. The job market is improving, albeit slower than many economists have been projecting. Wage growth is still muted. Supply chain issues are quite significant and really slowing things down in the economy. Housing is still quite strong but could be peaking in terms of appreciation. The same could be happening for autos in terms of sales. The Fed holds pat based on wanting to see Main Street indicators improve materially.

And now let’s put things in perspective. Sometimes we can think we are going through the most challenging times as a nation and world and lose sight of far more trying times in history. June 6th was the anniversary of D-Day. So I will try to create some perspective for us.

The scale of the D-Day invasion was enormous in terms of resources deployed and lives lost and impacted as these stats show.

Up to 7,000 ships and landing craft were involved, delivering a total of 156,000 men and 10,000 vehicles to the five beaches along the carefully selected stretch of the Normandy coast.

The landings would not have been possible without the support of massive air and naval forces, which were much stronger than the Germans’.

But on D-Day alone, as many as 4,400 troops died from the combined allied forces. Some 9,000 were wounded or missing.

Total German casualties on the day are not known, but are estimated as being between 4,000 and 9,000 men.

Thousands of French civilians also perished, mainly as a result of bombing raids carried out by allied forces.

The coordination between countries and armies, navies, and air forces was extraordinary. 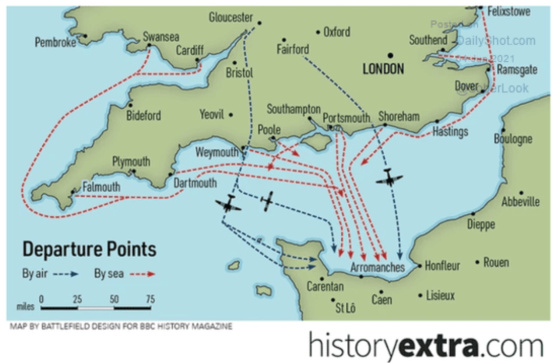 The results were incredible after the first day, although it didn’t end until the end of August 1944. 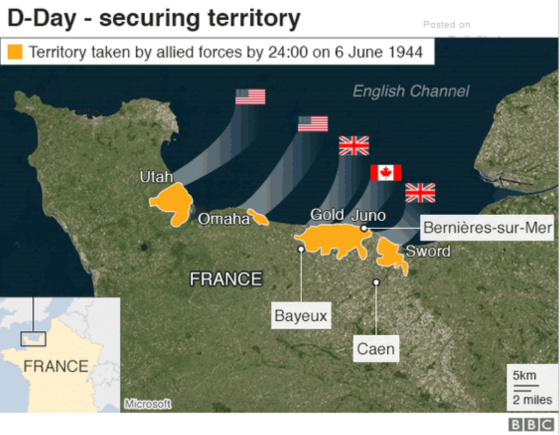 I am so grateful to the men and women who made such great sacrifices to liberate Europe and open up the world to the extraordinary opportunities for human advancement that have taken place over the last 76 years. Thank you for all you did for us and the world.