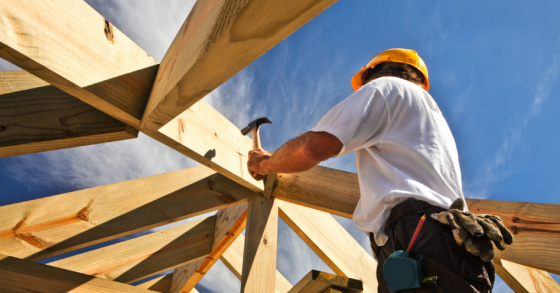 Although CWS is largely an owner/operator of apartment communities, we have been developing new communities for over 25 years. Approximately 15% of our portfolio consists of properties we have developed. Given the large amount of capital looking to own apartments and the compression in cap rates, we believe that building offers a good risk-reward relationship. With that being said, one of the cost inputs that has skyrocketed and has caught many developers off guard is lumber. For those general contractors and developers who have not already bought out their lumber packages, they are in for some serious sticker shock (CWS included). The following is from a recent Bloomberg article about the severe lumber shortage that exists.

Here is a chart showing how lumber prices have exploded higher since late 2020. 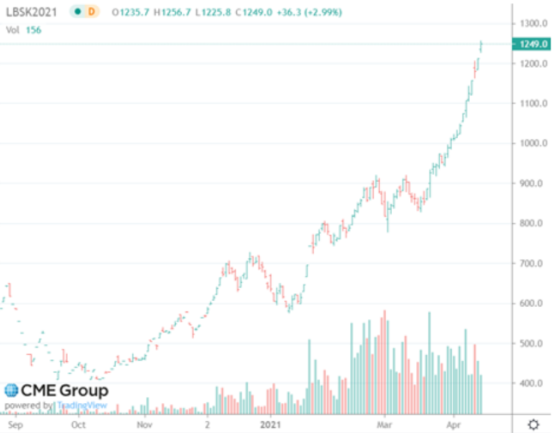 Lumber inventory is quite lean and they were not able to be replenished during what is typically a slower winter as demand held up exceedingly well. And the demand for housing continues to remain robust. 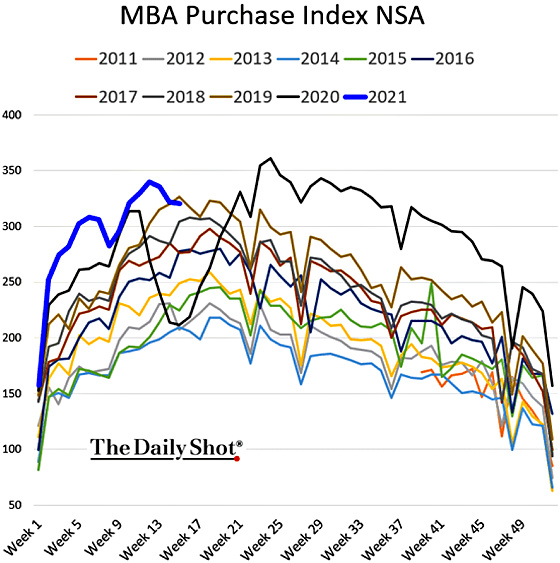 This is creating more pressure from builders to secure lumber as housing starts have grown quite significantly during the Covid recession due to lower mortgage rates and the desire for more space and owning as millions of people have had to work from home.

Mortgage rates have started coming down again which should help keep demand elevated.

The imbalance between supply and demand has become so great that the average home purchaser has had to pay over the asking price as the following chart shows.

And while it is in the mills’ best interest to supply more lumber to satisfy the demand, especially at these prices, they are not able to do so because of labor shortages and bottlenecks in the trucking industry which is slowing down deliveries to the builders. There are also some longer-term challenges that go beyond labor.

Labor isn’t the only long-term supply issue. Climate change and extreme weather are threatening logging. A plague of tiny mountain pine beetles is getting worse as warmer winters allow the bugs to thrive in more place across the globe. Massive wildfires are an increasing concern for forests along the U.S. and Canadian West Coast. Meanwhile, the timber industry and environmental advocates have also jockeyed over what lands should stay protected.

Along with the earlier chart showing single-family housing starts, this next chart shows how residential construction spending correspondingly took off during the Covid recession. This is not typical as an economic contraction leads to job losses, less income, lower consumer confidence, and overall less ability and willingness to make a large purchase like a new home or to remodel an existing one. This caught lumber mills off guard as they were expecting to lessen during Covid so they planned accordingly.

And if the current situation wasn’t concerning enough, there is this from the Wall Street Journal. Here is a link to the original report.

Freddie Mac not only believes that the nation’s housing shortage has grown (up from 2.5 million units in 2018), but we have an acute entry-level housing problem as the following chart shows. 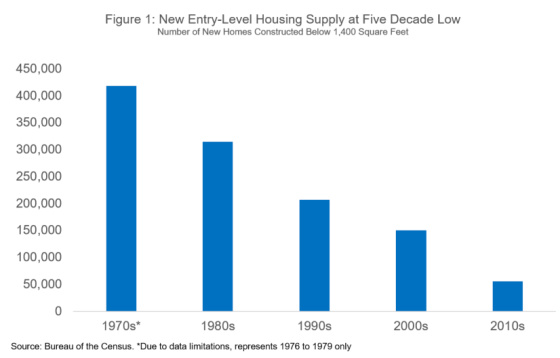 The combination of a strong demand for homes, which looks to continue given the shortage of homes being built, and millennials now becoming a larger force in the housing market should keep the demand for new homes quite strong absent a very sharp increase in mortgage rates or other exogenous shocks. Millennials have become more active in the home buying market over the last six years, particularly when it comes to mortgage originations for home purchases as the following chart shows. 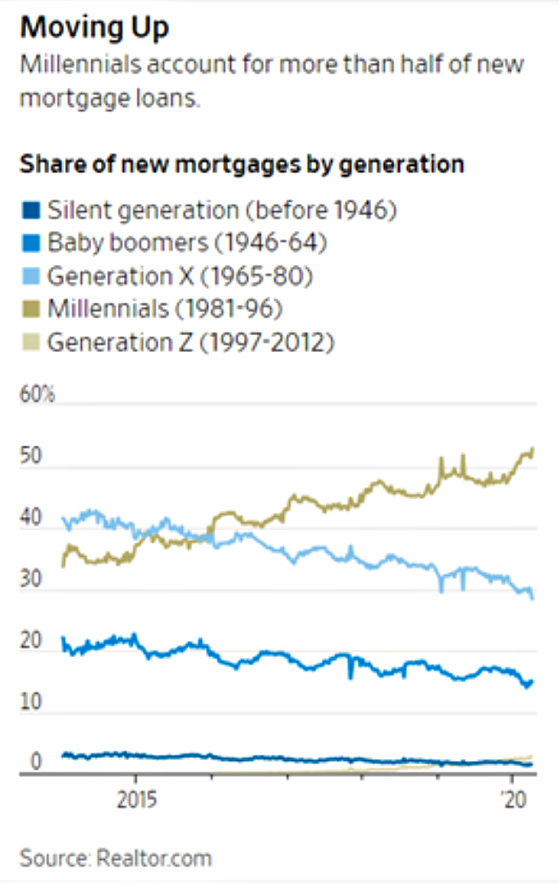 And if you don’t think millennials represent a large market force, think again. They are now larger than the baby boomers as this excerpt from an article in the Wall Street Journal points out.

The group last year also surpassed baby boomers as the biggest living adult generation in the U.S., according to the Pew Research Center. The largest cohort of millennial births was in 1990, Pew said, meaning that group turns 30 sometime this year.

“We anticipate as they turn 31 and 32, we’ll just see homebuying demand grow,” said Odeta Kushi, deputy chief economist at First American Financial Corp. Millennials could be responsible for at least 15 million home sales in the next decade, the firm said.

From everything I’ve written, it looks like high lumber prices are here for a while. We’ve been asking ourselves if there’s a more accurate way to ascertain where future lumber prices are headed given that we will have to be in the market for it over the next few years.

A natural place to start is the futures market. Here are the prices for lumber contracts going out to November 2021. It shows prices dropping below $1,000 which on the surface appears to be good news. Well, maybe, but I would not bet on it. And why is that? Because of the extremely low volume of contracts traded. This can be seen in the next to last column. For the November 2021 contract, it’s 153.

How does this volume compare to that of a more widely traded commodity like crude oil? The following chart shows the average daily trading volume for crude oil futures. 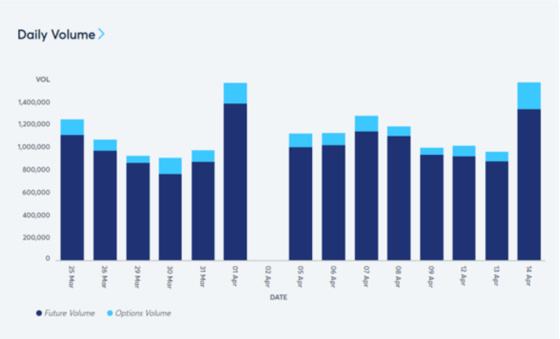 One can see that lumber futures’ liquidity is essentially non-existent, particularly when compared to a commodity like crude oil. 153 contracts versus 1.0 to 1.3 million represent about three seconds of trading in crude oil futures assuming 3,333 contracts trade every minute in a six-hour trading day. Lumber futures may as well not even trade.

Finally, here is the number of contracts currently outstanding for lumber futures. They total approximately 2,800.

Developers and builders are going to have to do their own evaluations regarding where they think future lumber prices may be since the futures market is so illiquid. With that being said, historically the cost of just buying at the market without giving much thought to whether that was optimal or not was not very high as the following chart shows. 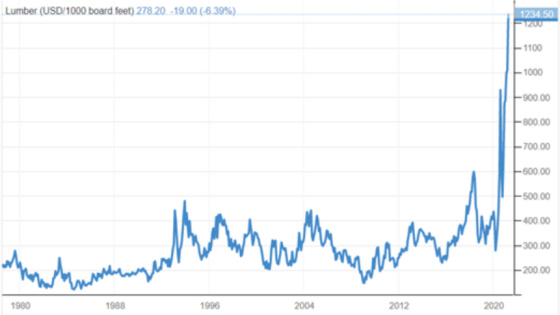 One can see that prior to the unprecedented explosion in lumber prices this year that they were generally in a range of $200 to $400. And while that is still a 100% range, the overall cost as a percentage of the project was not materially impacted. This is no longer the case as it is adding over $25,000 to the cost of a new home and approximately $10,000 for a new apartment unit.

It will be interesting to see how much longer homebuilders can pass on the higher cost of lumber to what seems like an insatiable pool of buyers. And from a multi-family perspective, there is currently enough profit, even at the higher cost, to keep building as the demand for quality apartments in growing areas is leading to ever-higher prices. It should also be supportive of values for existing communities because the cost of construction is now rising which provides for a larger margin of safety since the cost to buy already built communities is typically less than what it costs to build a new one.

There is clearly a lot of pain in the system as developers, general contractors, framers, and investors now have to absorb a material increase if they want to move forward with their projects and not delay completion. It will be interesting to see how this ripples through the system. It’s often said that the solution to high prices is high prices as it stimulates much more efficient utilization of the resource, more creativity, a search for substitutes, or delays until enough new supply comes to market. It will be interesting to see how builders, developers, and consumers respond.