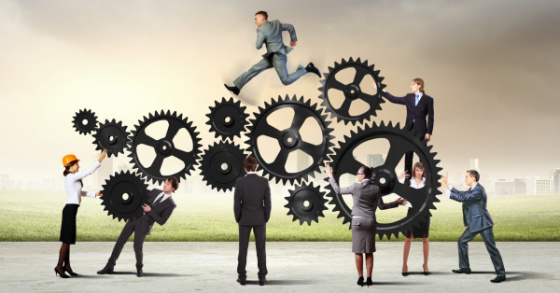 Investing has some parallels with driving. It’s important to have a destination that keeps you on course. I think of the destination as financial goals rooted in thoughtful consideration of powerful trends upon which to capitalize such that the wind can be put at your back while also being fully cognizant of what exposures you may have that can lead to a permanent loss of capital based on shorter-term issues arising. Returns compound not only by generating positive returns but, more importantly, by avoiding material losses. You avoid the latter by finding growth at a reasonable price, mis-priced opportunities, and not backing yourself into a corner with too much debt or fixed obligations. In other words, you still have to make sure your car is well maintained and you watch the road carefully to make it to your destination safely.

Keep your eyes on the road, your hands upon the wheel

I have been focused on the immediate driving experience over the last number of months versus the long-term trends since our concentration of variable rate debt at CWS exposes us to Fed policy changes which can impact our cost of funds and, correspondingly, our cash flow.

Not only is Cassius Clay, but Cash Is King (hopefully you got the joke) so we don’t want unexpectedly higher rates to take us off the road. It’s critically important that we be mindful of all material risks during our journey.

As the following chart shows, we have benefited significantly from the Fed acting decisively in the wake of the Covid economic shut down by lowering short-term rates aggressively in a short period of time. Most of our loans are tied to 30-day Libor which is impacted by Fed policy moves and one can see how it has dropped quite dramatically.

And while the rise in Libor from 2016 through 2018 was not without some pain for us, we have been more than compensated for taking on this risk by having our overall interest costs have been lower than the fixed-rate alternatives that were available to us when our loans were originated. Our peak average interest rate in the last cycle was approximately 4.20% which was not meaningfully higher than the estimated average fixed rate at the origination of 3.90%. In addition, this peak rate was only in place for approximately six months. On a longer-term basis, over the last 10 years, 30-day Libor has averaged approximately 0.73% and with an average spread over Libor for our loans of approximately 2.00% during this time, this has resulted in us having an average interest rate for our variable rate loans of less than 3.00% which has been quite favorable.

One of the core beliefs driving our continued emphasis on variable rate loans is that the long-term trend is for each cycle peak in rates to be lower than the previous one as well as this being the case for cycle lows. The following chart shows this quite well.

Since Libor is pretty close to 0% and we don’t expect it to go negative, we have basically gone as far as we can go.Click To Tweet

To quote from the song “Everything’s Up To Date in Kansas City” from the musical Oklahoma,

Everything’s up to date in Kansas City

They gone about as fer as they can go

They went an’ built a skyscraper seven stories high

About as high as a buildin’ orta grow.

You can turn the radiator on whenever you want some heat

With every kind of comfort every house is all complete.

You could walk the privees in the rain and never wet your feet!

They’ve gone about as fer as they can go.

They’ve gone about as fer as they can go!

LIBOR has gone about as fer as it can go.

The Fed is pretty clear that it doesn’t want rates to go negative.Click To Tweet

Powerful Trends I Haven’t Written About Before

I have written about this before but the two powerful trends influencing me as to why I don’t think the next cycle peak in Libor will exceed the previous one of 2.51% has to do with how much debt in the economy is tied to low rates and the very challenging demographic trends on the horizon. If the average rate in the economy is 3.50% (a rough estimate) and the Fed raises rates such that the average rate for new loans is 5.00%, this is a big deal because asset values have been calibrated based on the lower rates.

Now it becomes harder for people and businesses to qualify to refinance loans originated at lower rates that now can only be accessed at higher rates unless incomes have increased materially. And if the tougher qualification standards lead to more loan defaults then this will make lenders even more skittish and negatively impact asset values as borrowing power diminishes even more. It becomes a feedback loop with negative consequences. As a result, I believe the Fed is boxed in in terms of how high rates can go and once they reach the breaking point then it will have to reverse course and start cutting rates again.

An even longer-term trend, and one that I think is the most powerful of all, is related to the aging of the industrialized world due largely to dramatically declining birth rates, which has become even more worrisome during Covid. The following charts are what give me the conviction that variable rate loans have a strong demographic wind at their back assuming that their spreads remain at historical ranges and there will be an abundant supply of these loans from lenders.

Japan is the canary in the coal mine for me as its births have been falling for years and its population is shrinking.

The combined number of babies born in Japan and to Japanese nationals living abroad stood at 872,683 in 2020, down 25,917 from a year earlier and marking the lowest level on record, according to health ministry data released Monday.

The number of deaths dropped 9,373 to 1,384,544, the first decline in 11 years, the ministry said in a preliminary report that also included data for foreign nationals living in Japan.

The shrinking population and rapidly aging society have made it much more difficult for Japan’s economy to grow which has kept interest rates near 0% (and now below) since 1996.

Although the United States still has a relatively favorable outlook for growth, the glory days are behind it because of demographic factors. 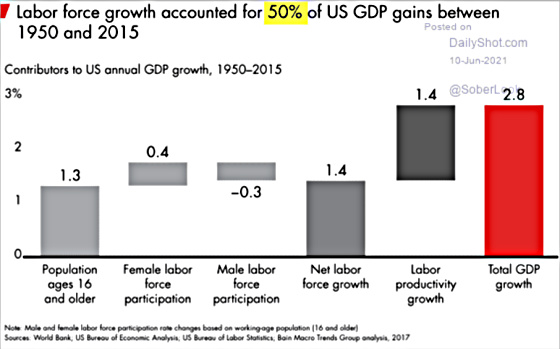 Labor force growth is going to remain anemic which means that either the United States has to significantly increase its productivity and/or increase immigration to get more workers into the economy to raise our economic growth potential. 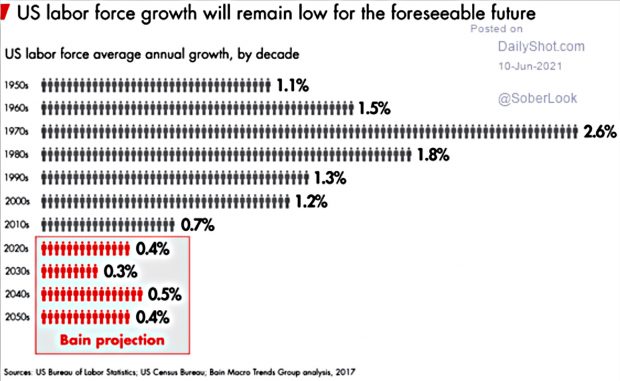 Europe is in far worse shape than the United States as its labor force will continue to shrink for the foreseeable future. 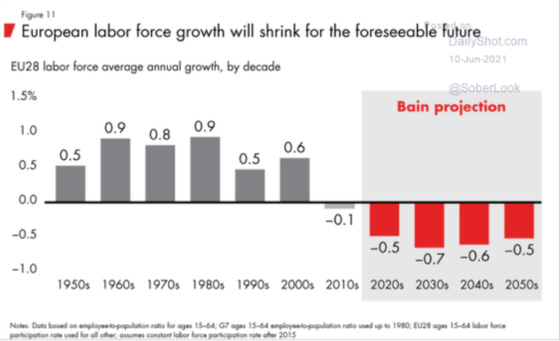 This has lowered the economic potential of Europe and has kept short-term interest rates near 0% or below since 2012.

Let’s zoom back out and focus in more detail on the United States and its trends.

One can see how U.S. population growth has been slowing since the 1960s. 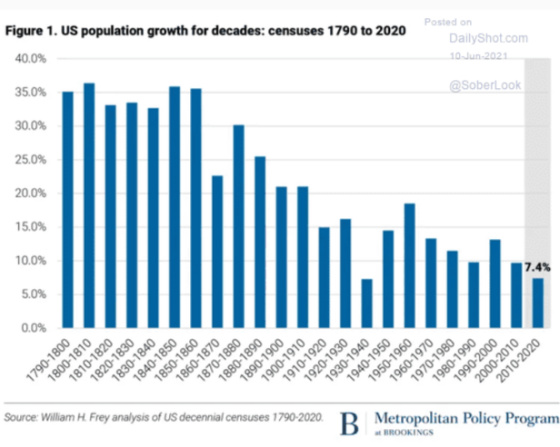 Fortunately for CWS, the areas in which we have properties are all green so they are growing faster than the average. And as growth becomes more challenging, finding growth becomes even more important since what was a wind to real estate investors’ backs is turning into more of a headwind. One can’t just throw a dart and wherever it lands will still benefit from growth. One must be much more thoughtful and take closer aim to find pockets of growth in the future. 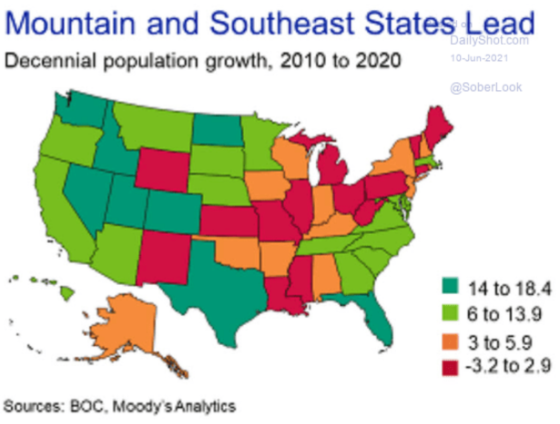 Annual births have dropped precipitously. This is an ominous sign because fewer births mean there will be fewer women of childbearing years in the future. This is under additional pressure as birth rates are dropping for a variety of reasons that can have a lasting impact. These include delayed marriages, fewer of them, far fewer teen pregnancies (a good thing), and couples choosing not to have as many children for financial and/or lifestyle reasons and because they are starting later. 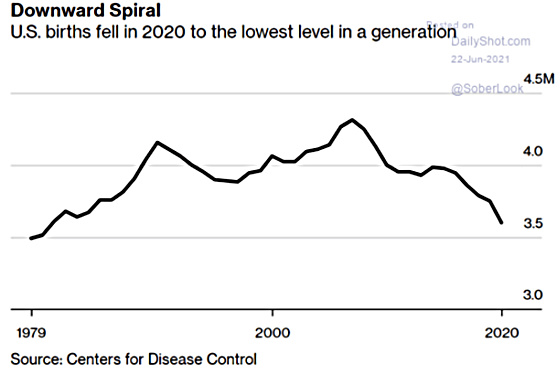 One can see how the general fertility rate has been dropping over the last 10+ years. 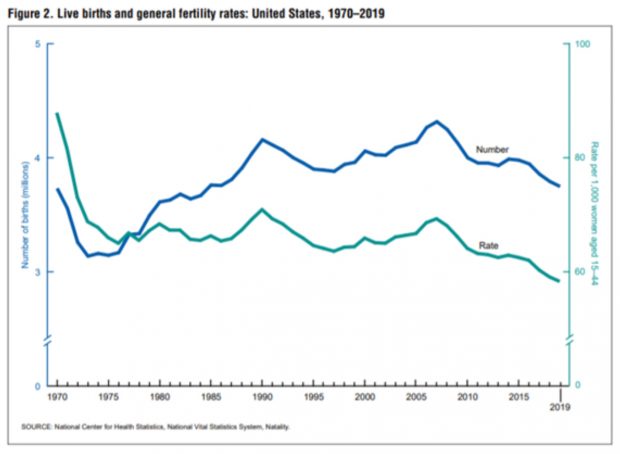 Here is a New York Times summary as to why birth rates are dropping.

Births declined across all age groups in 2020, except among women in their late 40s and girls in their early teens, groups that were tiny fractions of total births. The birthrate was down by 8 percent among teenagers, compared with 2019, and by 6 percent among women ages 20 to 24. The rate among women in their early 20s is down by 40 percent since 2007, the government said. Teenagers have had the sharpest decline, down by 63 percent since 2007, the data showed.

That is a drastic change from several decades ago, when rates of unintended pregnancy were high, particularly among teenagers, and American women tended to have babies earlier and more frequently than women in much of Europe. Today the average age at first birth is 27, up substantially from 23 in 2010.

The number of marriages has been dropping as well and, correspondingly, the marriage rate since the population has been growing. 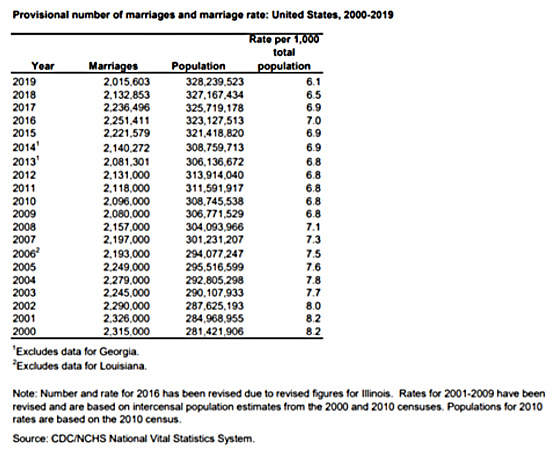 Covid really decimated the growth trajectory of the country as it led to more deaths and fewer births. 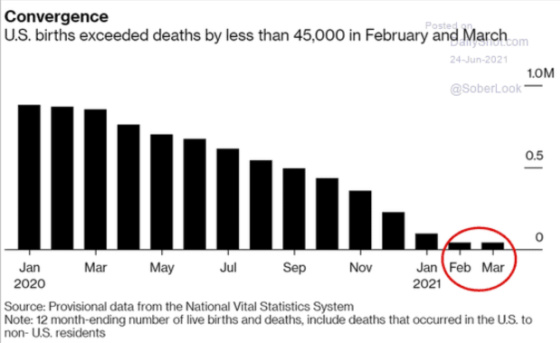 The U.S. is following the pattern of the world in having a declining birth rate trend. 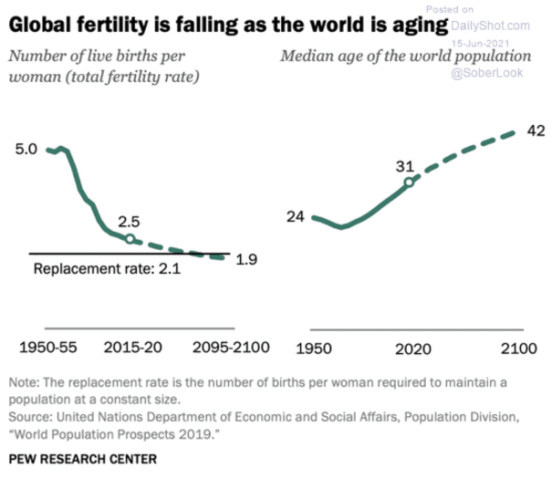 Finally, one can see how much of the industrialized world is poised to age rapidly. The U.S. is positioned relatively well in this regard, although I would characterize it as the cleanest shirt in a dirty laundry. 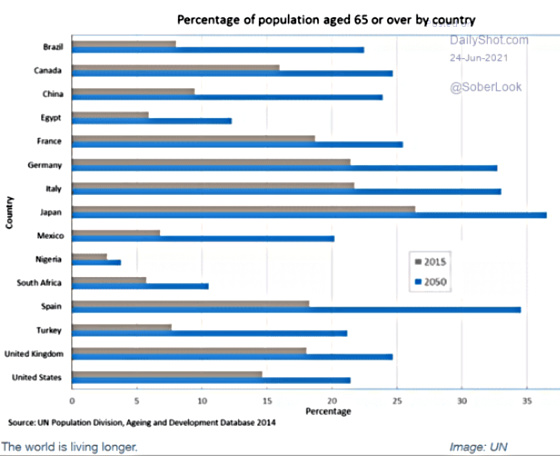 If Japan and Europe are good models to extrapolate to the United States then I think we will have short-term rates at very low levels for many years to come. After all, in spite of having much stronger growth characteristics than much of the rest of the industrialized world, our short-term rates are still near 0%. The challenges to growth are only going to become more pronounced so the Fed will not be able to move short-term rates meaningfully higher without causing a lot of pain.