An Improving Labor Market and A Fascinating Real Time Experiment 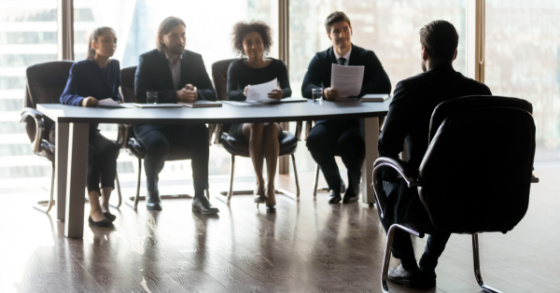 I started getting into the flow and writing about some epiphanies I had on the tennis court that I was planning on sharing this week. And then the jobs report came out on Friday and I saw the reaction of the bond market to what appeared to be a strong report and I felt like I had to do one more chart-oriented blog. Plus, with the 4th of July holiday on Sunday and Monday being a day off for us, I thought it would be better to keep it shorter and to the point (not a tennis point). So the tennis epiphanies will hopefully be revealed next week.

Here is the headline showing that the economy had a strong month for job creation in June.

And while the unemployment rate has dropped materially from pandemic highs, it has still not reached pre-Covid levels. 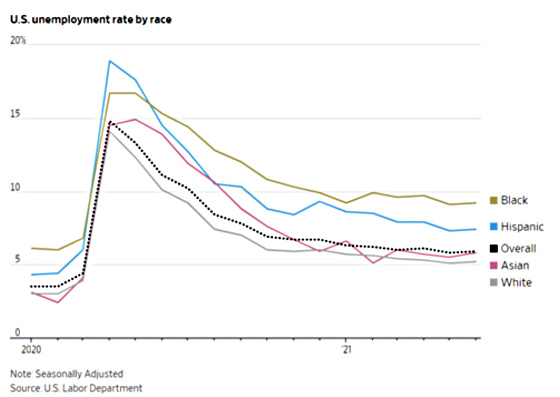 Not surprisingly, a very large percentage of jobs created have been in the leisure and hospitality industry. 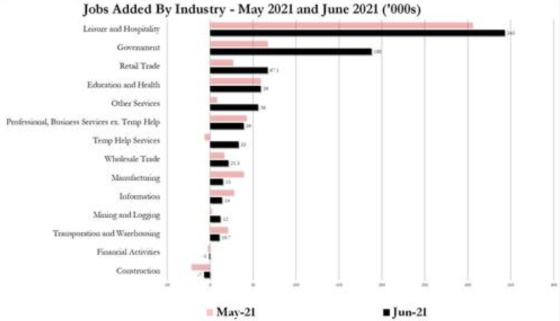 There is still a long way to go before the economy has recovered all of the jobs lost due to the pandemic. 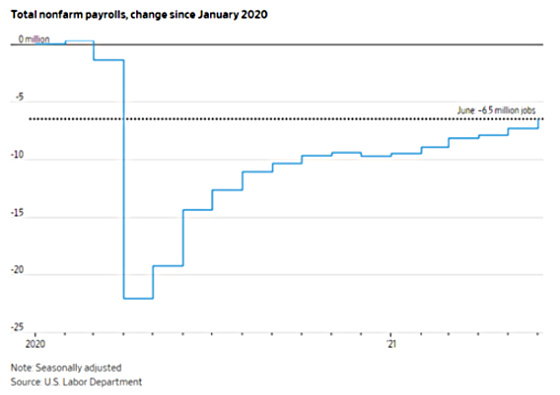 Based on projected population growth, the following chart estimates that the labor market will be back on trend in early 2024. 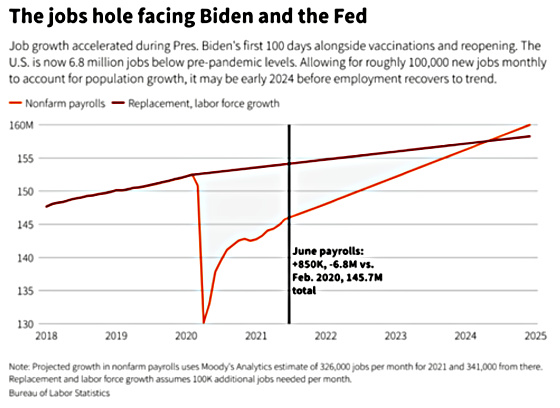 What I’m always most interested in is whether Fed policy will change as a result of reports like these. According to the bond market, the reaction of investors suggests that this report was on the more dovish side in terms of how the Fed would process it. Long-term interest rates fell as the following chart shows. 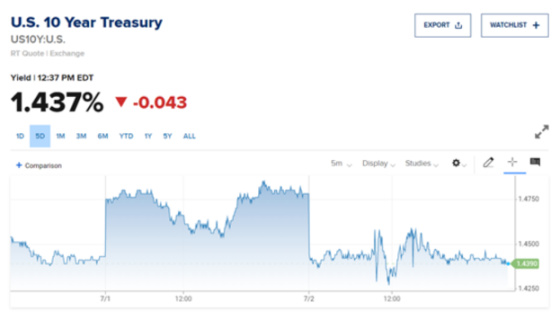 The two-year Treasury note, which is more sensitive to Fed policy, reacted by moving prices higher (interest rates lower) after the non-farm employment report was released, suggesting that the Fed would continue to remain on hold in terms of raising short-term interest rates. 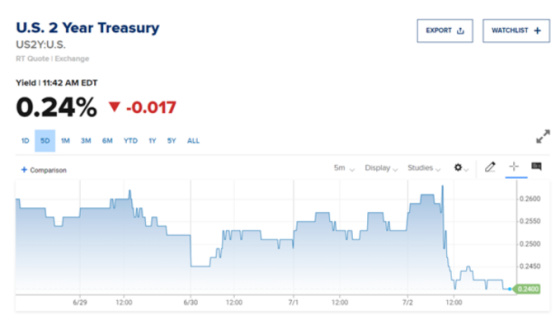 The following charts show the labor market indicators the Fed is paying close attention to in order to help guide its monetary policy. One can see that there is still more ground to be gained. 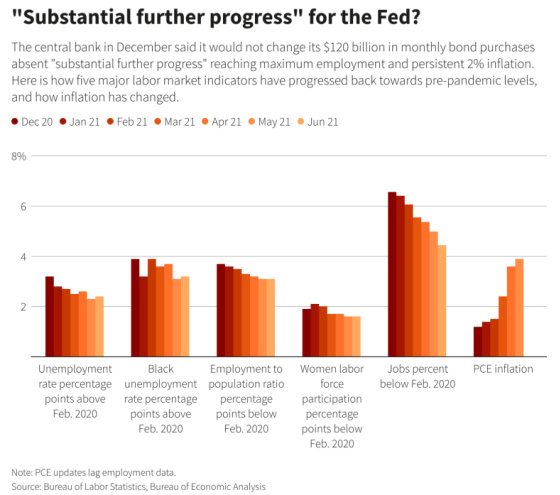 Now that much of the economy is beginning to open up again and there is a lot of pent-up demand for leisure and entertainment experiences and services, there is a real challenge finding labor to fill the positions needed to service this heightened demand. The economic outlook is quite bullish which, correspondingly, has given U.S. CEOs confidence to boost their hiring plans which are now at record levels. 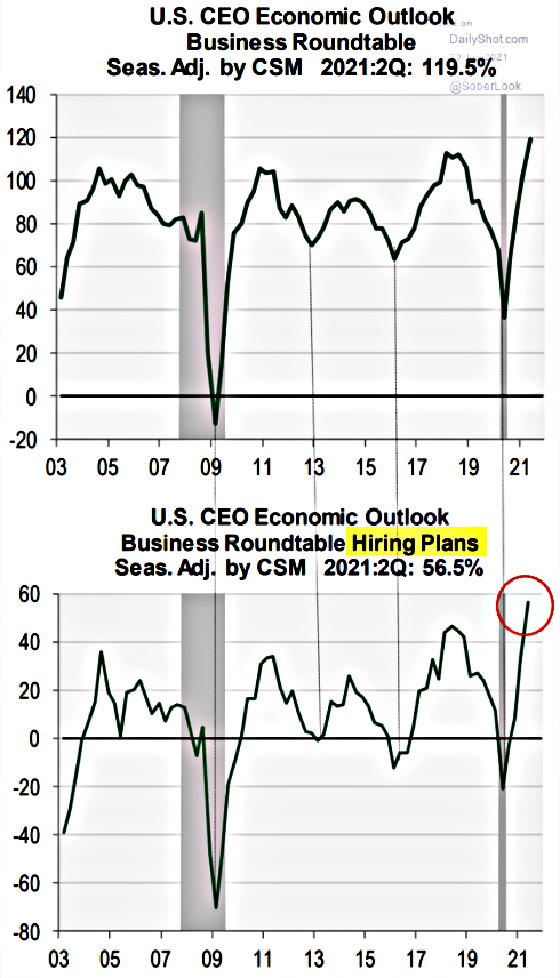 And yet, finding labor is becoming increasingly more difficult as the following chart shows how labor shortages are much more prominently mentioned in the transcripts of earnings calls held by management teams for investors and analysts. 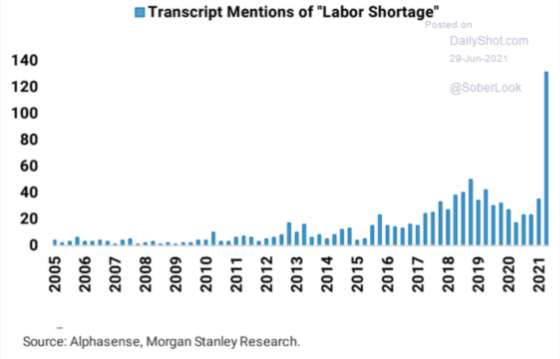 Finally, we have a fascinating real-time experiment to help determine if supplemental unemployment benefits are keeping people out of the labor force because they can make more money not working. Here are the states that have begun to cut or will be cutting federal supplemental benefits. Not surprisingly, all of them are run by Republican governors. 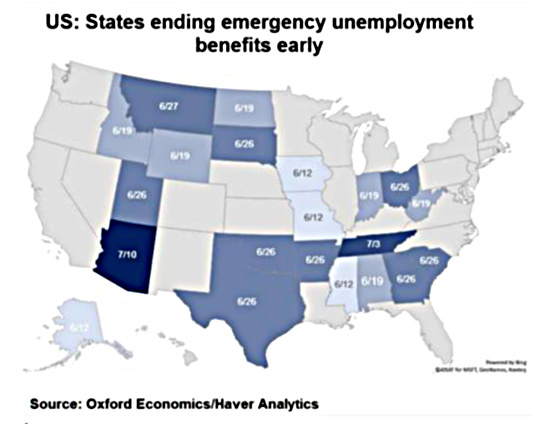 So what do we know so far? It does appear that we are seeing a more rapid drop in unemployment claims in the states that have cut benefits early versus those that have not.

Finally, one can see that online searches for part-time jobs have risen the most in states cutting unemployment benefits. 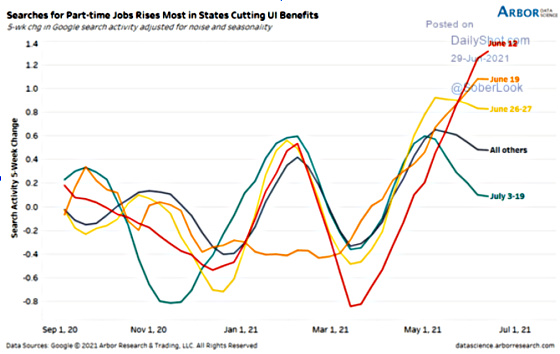 It would appear that the labor market should start to loosen up beginning in August when people know their supplemental benefits are coming to an end, or at least this is a reasonable assumption based on the experience to date of those states that have already cut supplemental benefits. I’m sure the Fed will watch this closely but for now, I don’t see a meaningful change in its interest rate policy.

I hope you had a wonderful 4th of July.