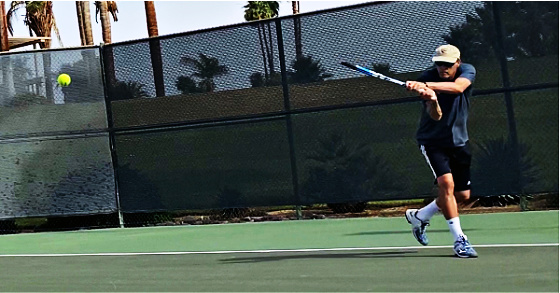 33 days after my heart surgery I resumed playing tennis. Of course, it was not at the same level or intensity as it was prior to my surgery but it was great to get back on the court nonetheless. It’s now been almost three months since the operation and I’m fully back. I’m playing multiple times per week and my game is back to where it was. I periodically take a lesson and I am certain that these have improved my abilities. It’s not only just the consistent practice and repetition but occasionally I’ll get a tip or piece of advice that can make a big difference in my game. One of those took place last week.

I have experienced a noticeable improvement in my forehand in terms of consistency, placement, and pace. My net game has improved as well. My serve is lagging in terms of power but I know that I hold back a bit to conserve energy, particularly when I have some lower back pain flare-up. The one part of my game that I feel is most deficient is my backhand. I grew up using a two-handed backhand but have gravitated to using a one-handed backhand more often as I started playing regularly a couple of years ago. With that being said, the pro who gives me lessons thinks that I should focus on my two-hand backhand given that I can hit it with more topspin and pace versus my one-hander which is more of a slice and defensive.

Tennis – My Need To Get A Grip

During my lesson last week the instructor told me to position myself to return his feeds with my two-hand backhand. I knew it was something I needed to work on but I just wasn’t happy with my progress to date. I was too inconsistent and not confident enough to use it regularly. Something had to change. I told him I wanted to start over because something was missing. I just didn’t feel comfortable holding the racket and hitting the ball where I felt I had control and power so I asked him to review with me how I should hold the racket in terms of where my left hand should go and how it should be positioned and the same for my right hand. Basically, I needed to get a grip.

He said that I should do a handshake with the racket and hold my right hand on the bottom such that my pinkie is gripping the base. This is definitely lower than I had been holding it. I should then have the left hand abut against the right, which is something I didn’t do either. Almost immediately I could feel that I had more control over the racket and that I could hit the ball with more velocity and topspin. There was a bit of an adjustment but in a relatively short period of time, I could tell that my groundstrokes were far less random than before and they felt much more comfortable. He has always told me to focus on my strengths versus trying to shore up my weaknesses. But I knew deep down that my backhand could be much better and I didn’t want to have to hit around it with my forehand. I really thought it could be improved and that lesson convinced me my gut was right.

Get A Grip – In Life Sam Zell

One little insight, getting a grip, led to big changes. I bring this up because I was reading a transcript of an interview with legendary real estate investor Sam Zell did that, Sam being Sam, covered a wide range of topics for which he was never lacking an opinion or conviction. One of the things he discussed is how curious he is and how important it is for him to read and observe and from this, he would sometimes get epiphanies that would lead him to take meaningful action. He was perplexed at the behavior of younger people as it has been so much different than his in terms of when they choose to get married if they even do. This delay of marriage has had huge ramifications and led to him wanting Equity Residential to put the pedal to the metal to buy urban assets in vibrant cities like New York, Los Angeles, and Seattle.

This is what Zell had to say.

I guess I would say that number one, you got to be tireless, you got to have a lot of energy. I think you’ve got to be a keen observer. All my life, I’ve been an incredible reader and I still read an enormous amount every day. And one of my skill sets is the ability to read and kind of toss away non-relevant stuff and look for themes. You look for, you know, things that are different. I mean, in the early 90s, my reading basically [showed] me stuff that I didn’t understand. And then I finally figured out that what we were going through in this country was a deferral of marriage. I graduated in nineteen sixty-three. I was married ten days later. A year later, ninety-five percent of my classmates were married, some with children. Compare that to 40 years later. You know, the average age of getting married has gone up by 10 years and that’s going to change how we do things. Well, I spent my whole life, you know, looking for and recognizing changes in trends and changing directions that create opportunity. There is no substitute for being aware. There is no substitute for being curious. There is no substitute for being self-confident. Those are the real things that matter.

Here is Zell’s insight shown graphically. One can see that there has been a substantial increase in the median age of first marriage for both men and women since the 1960s when Zell got married for the first time. 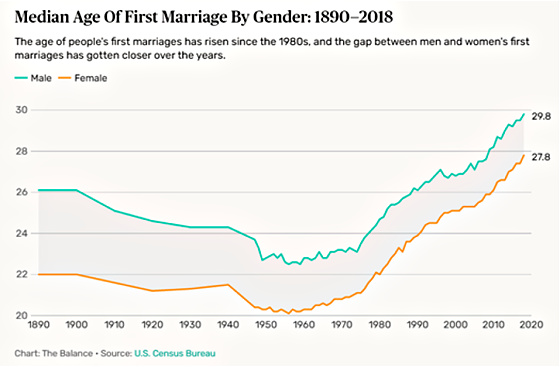 The impact of younger people delaying marriage led Zell to conclude that they would want to live in vibrant cities because their need for space would be relatively small due to not having children. So why hang out in the suburbs where there is less vibrancy and density when you can be in some of the greatest cities in the world and feed off of the energy and dynamism of such areas?

At CWS we also believed in the powerful ramifications of delayed marriage but we never thought it should lead us to go all-in regarding urban properties. We thought it was supportive of apartment demand overall and those suburban locations could benefit as well, particularly if the supply of new units were constrained and the price to purchase suburban assets or the returns from developing them were compelling. Our more diversified strategy helped us weather Covid better than urban-focused portfolios like Zell’s Equity Residential.

Get a Grip Epiphany

The big “get a grip” epiphany for us has been using variable rate loans for properties that we own for long periods of time, and not just for ones that we would want to turn quickly (which is rare for us). And, conversely, there was a very high price to pay for the security of fixed-rate loans due to how expensive it is to pay them off early. This is not the case with variable rate loans which trade flexibility (low prepayment penalties and lockout periods) for interest rate risk. Our experience and, more importantly, the data have shown that fixed-rate borrowers have paid a high price for eliminating interest rate risk for the duration of their loans while variable-rate borrowers have not only had more flexibility due to far less onerous prepayment penalties but they have been further rewarded with a lower cost of funds over long periods of time. We have had the proverbial free lunch that is not supposed to exist according to economic theory.

Similar to Zell’s epiphany regarding delayed marriage, the eye-opening insight for me was how powerful the aging of the industrialized world is on slowing down economic growth and having this spill over to interest rates. Japan has been the canary in the coal mine for this trend and its ramifications. Japan’s short-term rates have been less than 1% since 1995 as its labor force has been a long-term downtrend between 1997 and 2017, with a modest uptick since then. This labor force contraction has not only been a driver in bringing short-term rates negative, but it has also had a similar impact on long-term rates such that they are now very close to 0% as the following chart shows.

The United States is also facing slower growth in the years ahead as the following chart shows. 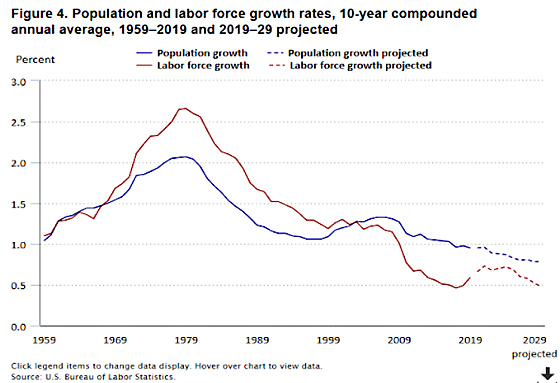 Is it any surprise that 90-day T-bill yields have been coming down for decades? Our T-Bill yields are now very close to 0%, a la Japan’s trajectory.

This slowdown has generated even more attention now that the first round of census data has been released. The following headline shows how weak our growth has been over the last decade.

China, which has been a huge contributor to global economic growth, has now seen its labor force peak and it will be going into long-term decline as the effects of its one-child policy are kicking into high gear and starting to impact the country’s future capacity to grow. 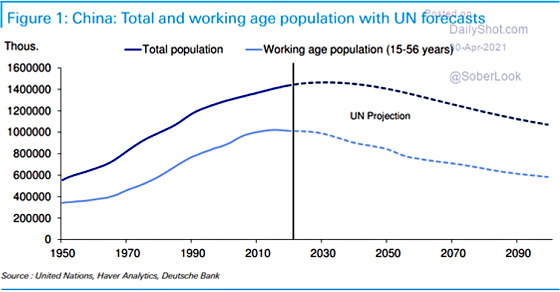 Zell’s insight about delayed marriages and ours about aggressively utilizing variable rate debt due to the aging of the industrialized world leading to slower growth and lower short-term interest rates have literally paid dividends for many years now. I am hoping that the same will be true about my new backhand.

Now that I have finally gotten a grip I hope it will improve my performance such that I am more competitive, successful, and derive great joy from playing for a very long time to come.