Bessembinder: A Fascinating But Skewed Study 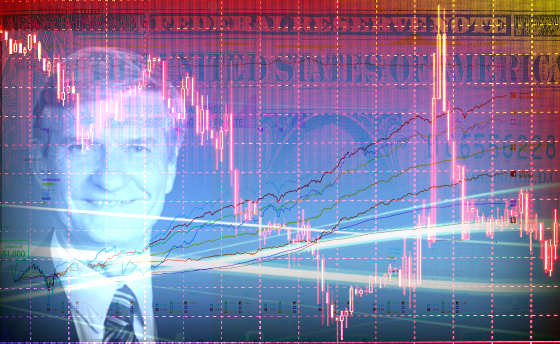 In reading @jesse_livermore’s latest and always brilliant missive/analysis, he referenced and linked to a study by Arizona State University professor Hendrik Bessembinder entitled “Do Stocks Outperform Treasury Bills?” It seems like a pretty ludicrous question since our capitalist system is supposed to reward risk-takers. With stock market investors owning the equity of the listed companies and correspondingly the highest risk since they are in a first loss position, then it should come as no surprise that they should have the highest reward. As a result, they should easily beat risk-free returns. But sometimes the hand is quicker than the eye so not so fast kemosabe.

Bessembinder’s study is one of the most impactful pieces of research I have read in a long time. The depth of analysis and findings are so informative and surprising that it will definitely impact how I deploy money in the stock market and helped me understand why real estate, particularly housing-related real estate, can perform well over long periods of time. Munger always says to invert and this study has forced me to do that. If you want to know why something does well, then first study what does poorly so you can learn why it does and avoid that.

Bessembinder analyzed all monthly common stock returns contained in the CRSP database from 1926 to 2015. He found that only 47.7% produced returns greater than the one-month Treasury Bill rate. More importantly, for longer-term investors, the results are even more surprising and disappointing. Only 42.1% of common stocks have a lifetime return “that exceeds the return to holding one-month Treasury Bills over the same horizon, and more than half deliver negative lifetime returns.”

The principal reason for the poor returns is the short shelf life of individual common stocks. The median time that a stock was in the CRSP database between 1926 and 2015 was just over seven years. The author tested whether selecting a random, individual stock for each month from 1926 to 2015 would have produced a 90-year holding period return would exceed various benchmarks. The results were shockingly poor. 96% of the single stock simulations underperformed the value-weighted index and underperformed the equal-weighted index 99% of the time. The single-stock strategy also underperformed owning T-Bills 72% of the time.

The overall stock market is able to generate much higher long-term returns while the majority of individual stocks underperform T-bills because there is a heavy positive skewness. The relatively few stocks that outperform do so in such a way that they more than make-up for the huge number of losers. Large positive returns are more frequent than large negative returns.

The author estimates that $32 trillion of wealth (returns in excess of Treasury Bills) was created between 1926 and 2015 via the approximately 26,000 stocks that have appeared in the CRSP database during that time. Of these 26,000 stocks, only 86 of the top-performing stocks (less than 0.33%), were collectively responsible for over half of the wealth creation. And the top 1,000 performing stocks, less than 4% of the total, accounted for all of the wealth creation. The other 96% only matched the return of the one-month Treasury Bill with many of them producing less. The following chart shows the distribution of wealth creation and how few stocks account for all of the gains.

The following chart shows how skewed the returns are for a decade holding period returns. 49.2% of stocks underperformed Treasury Bills. 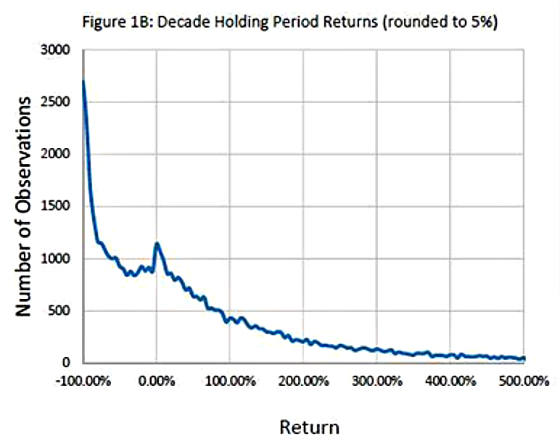 Large capitalization stocks had much more staying power and consequently a much better chance of beating Treasury Bills over a decade as the following table shows.

The table shows that the percentage chances of having positive returns and then outperforming T-Bills increase quite significantly as the size of the company grows. The skewness drops as well. This means that there is a more even distribution of returns. With the smaller capitalization stocks, the high positive skewness means that much of the positive returns are the result of relatively few stocks. Despite the improving returns as the capitalization increases, there is still underperformance relative to the value and equal-weighted indices constructed by the author.

Now that you’ve seen the Bessembinder study do you agree that it’s a hard combination to beat?

3 comments on “Bessembinder: A Fascinating But Skewed Study”