Let He Without Sin... 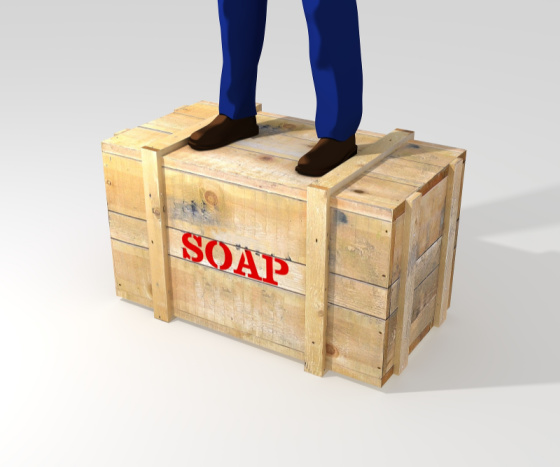 I’m going to get on my soapbox for this post. I was talking to a friend who was picking my brain about banking relationships as he was thinking about switching banks for his business and he wanted to know about the one I use. I told him that it’s been all positive which he liked hearing since he was seriously considering switching to the same bank. He then said that equally important to him was that the bank won’t make any loans to fossil fuel companies and this was weighing highly on his decision. While my reaction was one of a bit of disgust and disdain, I chose to take the path of moderation and not respond other than acknowledge what he said. To me, it all sounds good in theory and it is wonderful virtue signaling but the reality is that if fossil fuel companies are starved of capital we will have an incredible shortage of energy, prices will skyrocket, and most consumers would be negatively impacted because higher energy prices are a type of tax and will hit spending in other areas of the economy. Oil demand has already fully recovered from the Covid crash as the following chart shows. 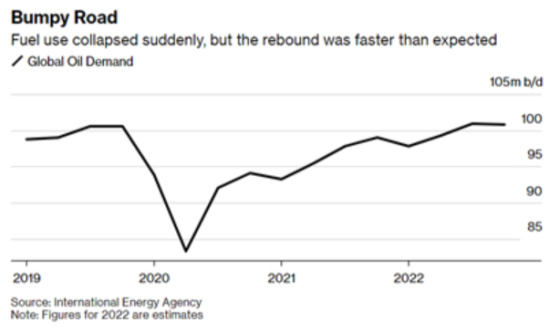 After crude oil prices went negative for the first time in history when supply overwhelmed demand, prices are now higher than pre-Covid levels. And while there is most likely a geopolitical premium built into the price because of the prospects of Russia invading Ukraine, demand is still exceeding supply. 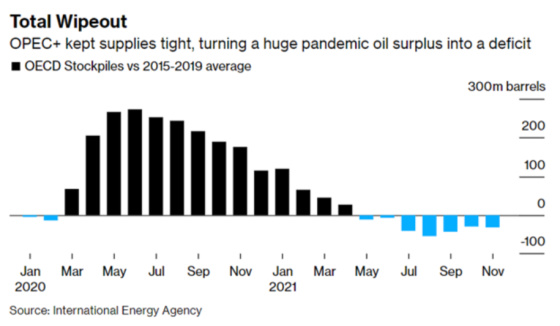 The price of crude has risen sharply given the supply/demand imbalance. 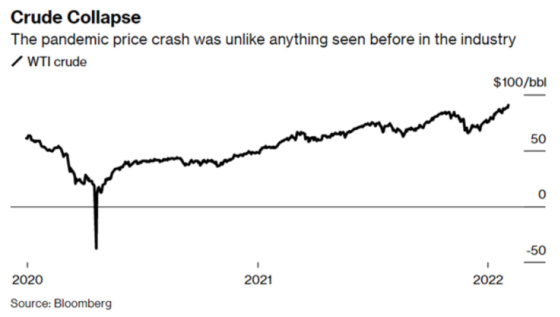 Global oil investment understandably dropped sharply during Covid but has not recovered much, nor is it expected to over the next three years, thereby posing more of a threat to oil demand exceeding supply, absent a material economic slowdown. 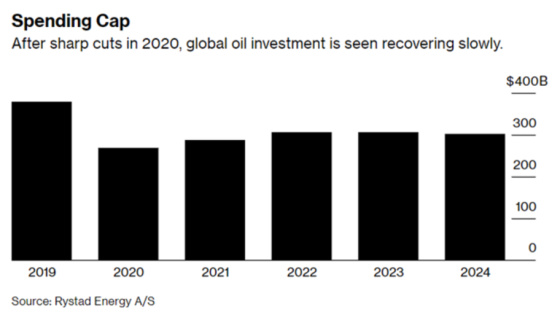 One can see that fossil fuels still represent the primary source of energy for utility companies and renewables have a long way to go to replace these much more reliable sources of energy. 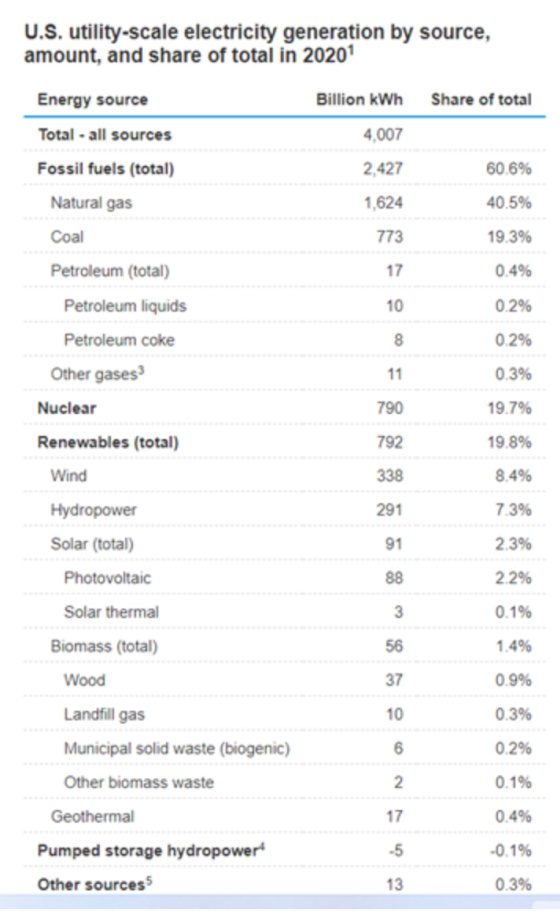 Petroleum is immaterial in the table above but it represents a very large percentage of transportation energy consumption which is not taken into consideration in the table.

For many years energy companies, particularly frackers, were spending more on production and capital expenditures than the cash they were generating, thereby necessitating borrowing. It was growth at all cost mentality and investors came out on the short end of the stick. The focus, at least for now, is a capital discipline with returning capital to shareholders being a priority which is literally paying dividends for energy investors.

Using Pioneer Resources as an example, between 2012 and 2014 when WTI averaged around $100 per barrel, Pioneer’s operating cash flow, less capital expenditures for those three years was approximately -$2.3 billion. By 2021, it produced $2.6 billion. After taking shareholders on a wild ride, the stock has now exceeded its previous peak reached in 2014 while now producing far more cash flow. This is the major reason why the forecast for global capital expenditures is so modest in terms of growth because they are no longer reinvesting all of their cash flow back into production capacity. 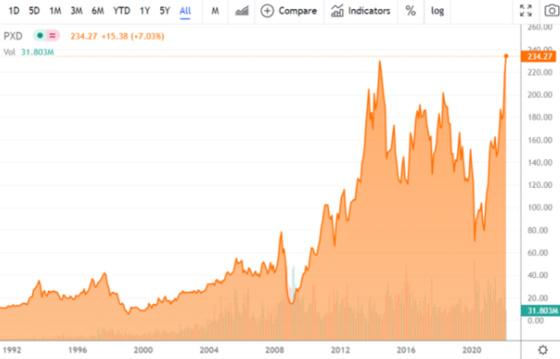 I think most of us would agree that over the long run that transitioning from fossil fuels to renewables is a beneficial move for the environment. Unfortunately, nothing is black and white and we can’t use magical thinking to get from here to there. Fossil fuels NEED to remain a material source of future energy production. This is indisputable because solar has challenges with storing energy since the sun isn’t always shining (obviously not at night) while we also can’t control when the wind blows. Nuclear power is very efficient but it is extremely costly, takes a long time to build, and people have a great fear of another Chernobyl or Three Mile Island. Let’s not forget all of the electric cars that will be coming online. They’re going to be plugged into the grid that requires energy to charge them which will largely need to come from fossil fuels in the short to medium term.

I bring all of this up because I used to be pretty adamant about not investing in certain types of companies because of the perceived harm they cause. Tobacco companies were the poster child for me as I was never a smoker, I hate being around cigarette smoke, and I feel like the risk-reward of smoking is out of whack, and that the impact on society is a net negative. I also know companies like Philip Morris and Altria have been incredible long-term performers for investors and there have been people and institutions that have gotten over whatever concerns they may have and they have made a lot of money owning shares of these companies. These companies produce very high-margin products that don’t require a lot of capital reinvestment while possessing tremendous pricing power. So even though volume levels have been dropping for many years, they have been able to more than makeup for this and still grow their revenues and earnings while also absorbing higher excise taxes because of their pricing power due to the addictive nature of the product.

Having been in real estate my entire career, I have known the value of reliable and growing dividends. The reinvestment of dividends, as well as using them for lifestyle needs, has been a big contributor to my financial wellbeing. Of course, I’m not alone in valuing dividends highly as millions of people have a dividend-focused investment strategy. I bring it up to talk about how central it has been for me.

I started thinking about investing in tobacco companies after deliberating about more socially acceptable types of businesses. Let’s go back to renewables for a bit. To produce a large amount of solar energy requires large solar farms that take up a tremendous amount of land that can create habitat destruction and impact the views of people living nearby. Harmful mining practices are also a cost of producing solar panels. So not everything is sunny when it comes to solar (pun intended).

Wind farms are not without some externalities. The turbines are noisy and can cause harm to wildlife, particularly birds, and they can take up a lot of land. And, as mentioned previously, it’s not a reliable source of energy because wind is intermittent. Electric vehicles use a lot of rare-earth commodities, especially lithium, which has a very negative impact as a result of needing to mine them as it requires a tremendous amount of water and is very labor-intensive. The more labor, the more risk of workers getting hurt or sick over the long term. They also produce a lot of waste as very few lithium batteries are recycled as of now. In addition, it also takes a lot of energy to produce electric vehicles. One has to look at the totality of energy consumption versus savings starting with the extraction processes for raw materials and the manufacturing of the cars and not just the savings from not having to use fuel to drive the vehicles.

Let’s look at other industries. Defense companies are incredibly important to our national security but let’s not be naive. Yes, they can protect us and our way of life but we sell weapons to countries in some very bad neighborhoods with some bad actors. The U.S. military has used its incredible weaponry for some questionable reasons over the years as well as for some very noble causes.

Pharmaceutical companies produce some incredible drugs that save lives, extend the life expectancy for those contending with certain diseases, lessen pain, etc. And yet, what they charge for some drugs is shockingly high and egregious in some cases and let’s not forget about the opioid crisis and their role in it as well as the incentive to overmedicate people, especially kids.

Food is a necessity to live but we know that food companies don’t always produce the healthiest products which can lead to obesity, diabetes, heart disease, etc. Should we talk about Facebook, Twitter, Google, Apple, Netflix, and Microsoft? These behemoths all have products and services that are harmful to society, especially social media and gaming, and how they use their market power to squelch competition and use customer information sometimes to the detriment of individuals and society take them off of the angel list. And what about holier than thou companies that take politically correct positions in the United States but have no problem doing business in China in spite of all of the harmful actions and policies are taken by the government there?

I could go on but I just wanted to show how my thinking has evolved and that if I want to be honest, realistic, and willing to look under the hood, then virtually every business has issues.  People are free to choose what they want to do with their bodies and yes I know there are negative consequences to people smoking and getting lung cancer and other ailments and the toll this takes on their lives, their families, friends, employers, and society as a whole. And just like there are destructive weapons and defensive ones, good pharmaceuticals and ones that are overprescribed, and healthy food and unhealthy food, there are actually now risk reduction tobacco products being produced by Philip Morris and others. Dare I say good cigarettes and bad cigarettes?

I was particularly drawn to Philip Morris after learning about its heated tobacco system called IQOS. After spending billions on research and development it has been in the market for a few years now and is gaining traction, particularly in Japan. We now have a fascinating situation that is turning a declining, but highly profitable, business into one with very compelling growth potential because of the product being less harmful than traditional cigarettes. The company is helping people enjoy the experience of smoking with less risk. Given this, why would I not be on board with investing in the company, especially with it paying a dividend of approximately 4.5% and a projected growth of 3.5% per year? Altria, which has the domestic distribution rights to IQOS, has a dividend yield of approximately 7% which is probably decent compensation for having fewer growth prospects than Philip Morris.

Someone once told me to hold my judgments lightly. The more I go through life the more I have learned the value of this, particularly when it comes to investing. I have seen people make sub-optimal investment decisions because of ideology, emotion, and judgment. I have come to terms with how every person and business has flaws so who am I to judge? If investors want to stay away from good businesses and thereby keep valuations lower than more “socially acceptable” ones then I’m happy to take advantage of the valuation discount and secure above-average dividend yields and let them compound over a long period of time by reinvesting them.

And then my goal is to use that money to make the world a little better than I found it.