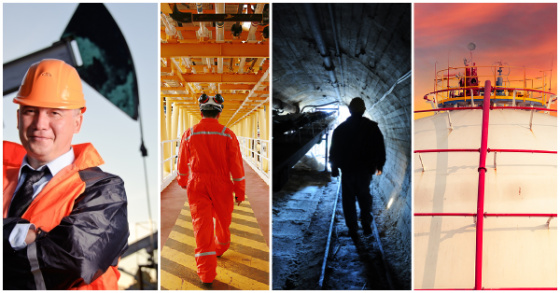 One can see that natural gas has gained the most market share of the world energy supply between 1973-2019. Oil’s share has dropped quite significantly during this same time frame. With that being said the second chart shows that it has still grown materially but not nearly as much as natural gas and nuclear. 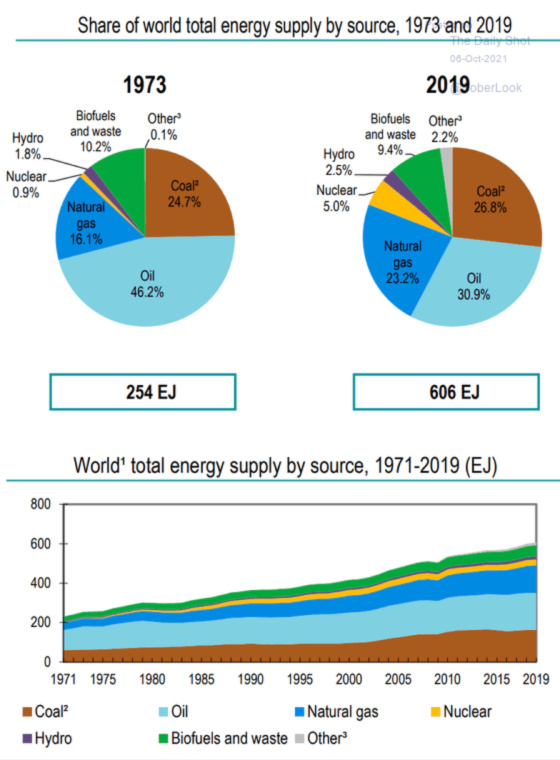 I bring this up because of Europe, and to a lesser degree, the United States is going through a very painful energy crunch related to extraordinarily tight supplies of natural gas as well as coal and oil. The following chart shows how natural gas prices have spiked in the United Kingdom and in the Netherlands. Prices have gone vertical and this is putting incredible strain on the economy and people’s lives. 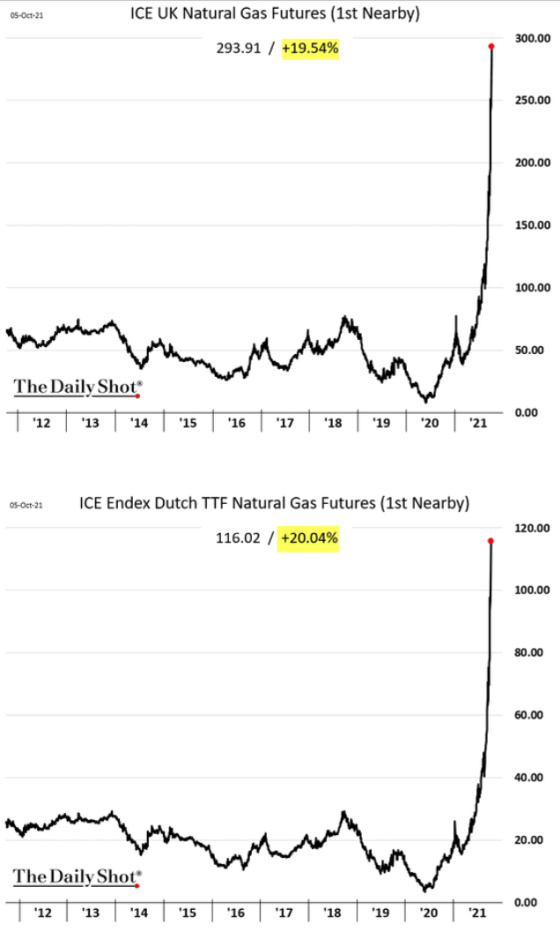 Since natural gas is a major source of energy for electricity providers, the cost of electricity has skyrocketed as well as this chart of Spain’s electricity spot prices shows. 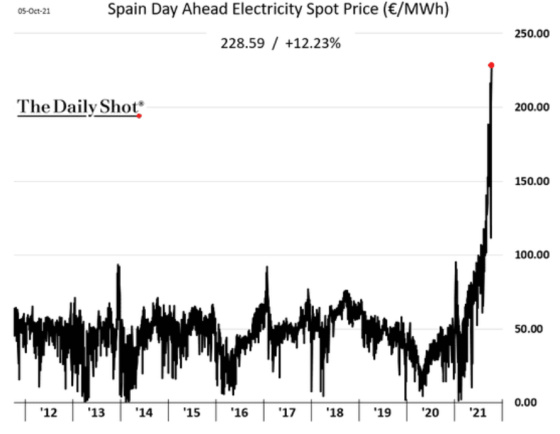 Russia is a huge supplier of natural gas to Europe and one can see that its production is well above its historical range. 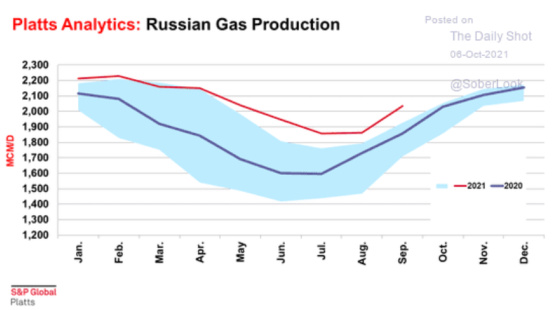 Unfortunately, Gazprom, Russia’s largest natural gas producer, has been unable, or more realistically, has chosen not to replenish its inventory for geopolitical reasons. This is resulting in very little margin of safety in the event of demand spikes due to cold weather or supply disruptions. 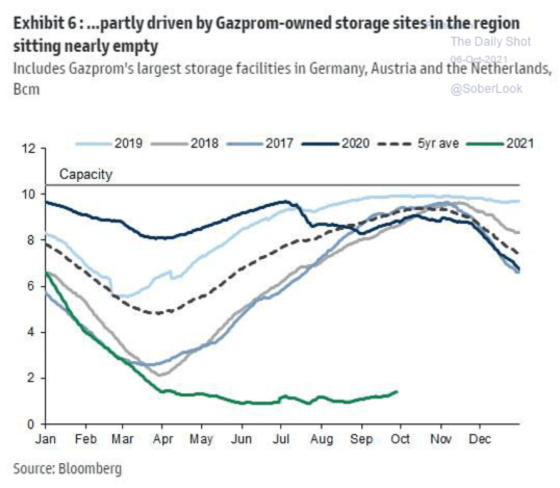 Perhaps there is some light at the end of the tunnel as this headline came out as I was writing this blog post.

We shall see if this materializes and remember, even if it does, there is still a large inventory deficit that needs to be replenished.

On the domestic front, the United States is also seeing higher natural gas prices but not to the extent that Europe is. 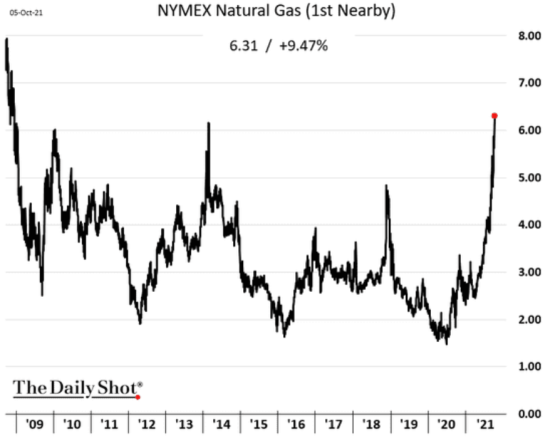 Natural gas isn’t the only energy source that is experiencing a huge increase in its price. We are also seeing a big contraction in petroleum, gasoline, and derivative products inventories as the following chart shows. 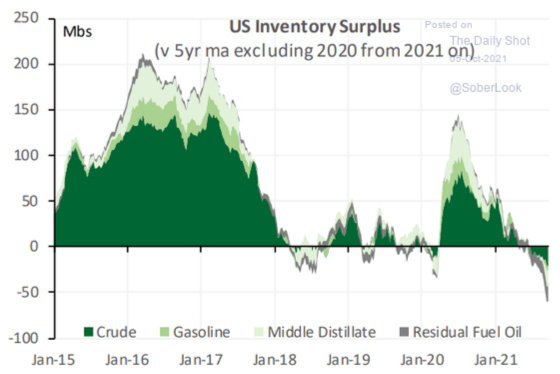 This has helped push the price of crude oil higher. 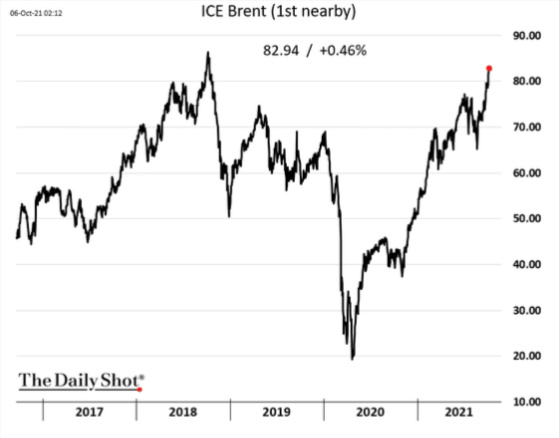 Finally, the one energy source that so many have said has no future, coal, is now in very high demand and supply is far too constrained to meet the needs of power providers. Here is a headline from the Wall Street Journal. 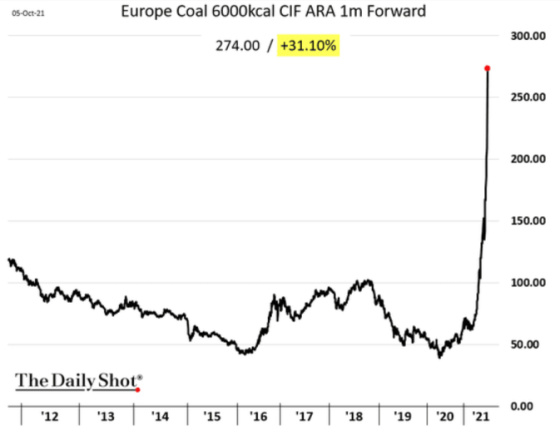 India, which is a huge coal consumer, has seen its inventory levels of coal drop to four days of supply. 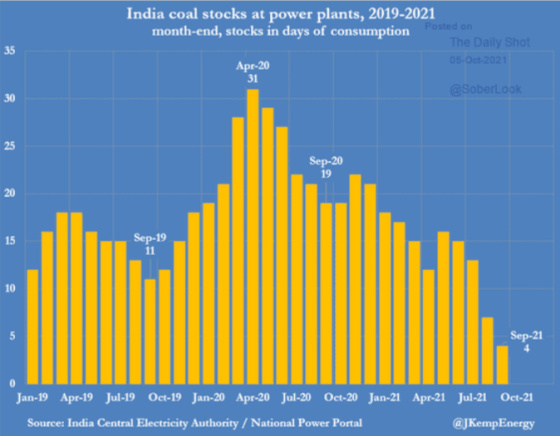 Coal presents a particular challenge because it is such a target throughout the world because of the amount of carbon dioxide it emits that pressures have been building to stop funding coal producers and to have utilities transition away from coal on a very aggressive time frame. Even China, by far the world’s biggest coal consumer, has announced its intention to stop adding more coal production capacity. And yet, as the world transitions away from fossil fuels to renewables like wind, solar, and hydro, it becomes much more exposed to intermittent sources of energy that can’t be controlled and are not easily stored. We can’t control the wind, sun, or how much rain is produced. What we do have much more control over is extracting hydrocarbons and producing natural gas to cover those periods when other sources are in short supply. Coal is abundantly available but because of Covid and pressures on coal companies and banks to not fund coal extraction, capacity has dropped about 25% over the last seven years in the United States. And, according to the WSJ article, global production is about 5% below pre-pandemic levels. 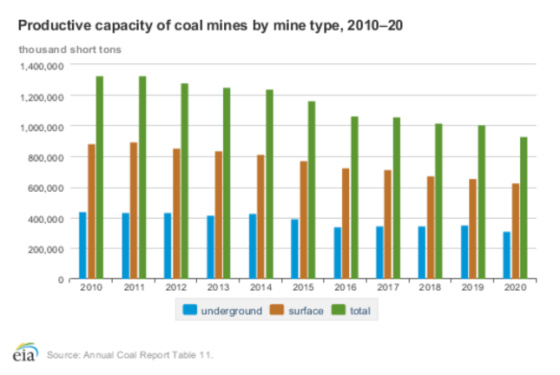 Here are some highlights from the 2020 Annual Coal Report:

One can see from the table below how domestic coal production has dropped by approximately 49% since peaking in 2011. 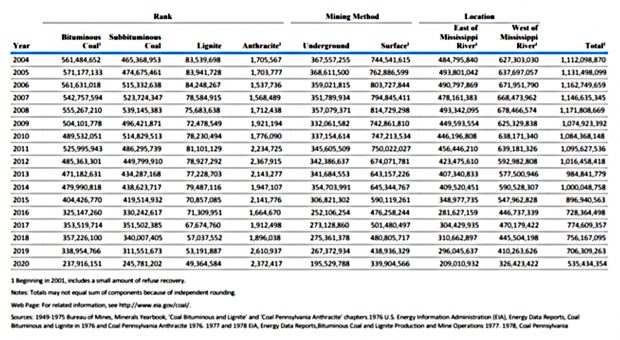 The increasing output will not be easy as the industry is facing an acute shortage of labor and it’s not a job that many people are jumping at to take.

This chart shows the precipitous drop in coal mining jobs. 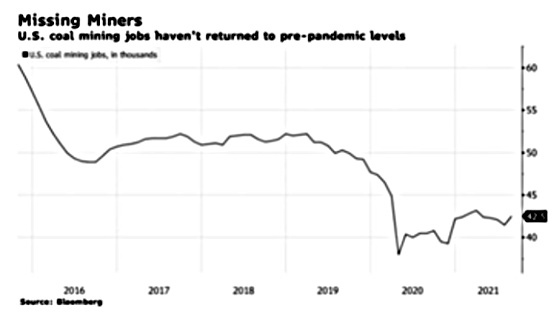 So here comes a confession. Up until a few years ago, I was not one to have much exposure to individual stocks. And when I finally decided to pull the trigger and invest some money into individual securities, the timing could not have been worse as I did it just prior to Covid being unleashed on the world which ended up devastating the global economy along with the price of most stocks, especially energy companies since demand was eviscerated.

In an effort to generate some income I allocated funds to dividend-paying stocks.  I had stayed away from individual stocks due to the volatility and feeling like I didn’t have enough time to watch my investments carefully enough. With dividend-paying stocks, however, the opportunity to reinvest the dividends into more shares of companies could allow me to reinvest the dividends to compound my capital as well as potentially diminishing some of the psychological impact of my stocks going down. During each quarter when it comes to buying more shares from the dividends, I almost always want a little correction so I can have more purchasing power due to the cheaper price. If I’m ok with this stock price reversal each quarter then why wouldn’t I be ok with a much more material one assuming I believe that the dividend is secure and hopefully growing over time and I don’t need the money for a long period of time? Boy was this theory put to the test, particularly with a coal company that I purchased. A logical question is why would I invest money in a company operating in an industry that is under attack and has a dismal future? I have Carl Icahn to thank for my decision. Since I don’t like to give investment advice, regarding individual stocks, and I’m not allowed to from a regulatory standpoint, I will not reveal which company I will be discussing.

I remember reading something Carl Icahn said about why he invested in a business that had a poor long-term future. He said that it was his experience that the end comes far longer than most people think and that the amount of cash generated by these dinosaur companies can be tremendous and offer investors compelling returns on their way to extinction. The low valuations assume a stream of income that is often much larger and lasts for much longer than what is being priced into the stock, thereby offering a compelling investment opportunity. This got me thinking about coal. It was still a very necessary commodity, capacity was getting cut, and yes, the long-term future was bleak, but I also knew that the transition to alternative energy was not going to be as simple and utopian as many people thought. There would come a day when coal was going to be in short supply and there would be great pricing power for those companies that could survive. What I didn’t count on was Covid and the decimation in demand for coal and virtually all forms of energy. The company I bought got crushed and had to eliminate its dividend for a period of time. The stock dropped by approximately 80%! Ouch, that was painful. Plus I probably put more into it than I should have. And yet, I also believed in the guy running it as he had a track record of being a survivor and opportunistic and he had a large personal stake in the firm. If anyone could battle through and come out the other side it would be this guy. Fortunately, I was right on that front.

The company did not have to declare bankruptcy. It is now on very firm financial footing, debt has been paid down, the dividend has been reinstated, albeit at a lower rate, and I was able to accumulate about 20% more shares at much lower prices from reinvesting the dividend when it was still in place. Now the stock has almost quadrupled from the bottom (still meaningfully below my initial entry point) and is a producer of a commodity that is now in high demand that it can produce profitably. Cash flow should grow significantly as it faces much less competition and can take advantage of prices for incremental supply that is not tied to longer-term contracts. 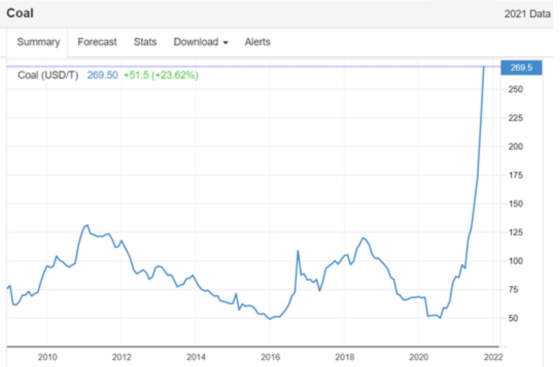 Jim Rogers was a partner of George Soros’ for a number of years after they started the Quantum Fund and has an enviable investment track record. I remember him saying that he likes to invest in industries where the depreciation charge is much greater than capital expenditures because it means it is suffering through a downturn and has to conserve capital which means that very little new supply is being added, and in some cases, capacity is being reduced. If and when demand starts growing again then suppliers who survive should have tremendous pricing power and the potential to generate a great deal of cash flow. This seems to be the case for the company I invested in.

Here is a snapshot of a portion of the cash flow statement for the company shown on a trailing 12 months basis. One can see that cash flow has been coming down quite significantly since 2018, even before Covid. This isn’t surprising given the trends in the coal industry. Capital expenditures peaked one year later at approximately $306 million while depreciation was $309 million. In fast-growing industries, capital expenditures will be meaningfully higher than depreciation and amortization. For example, Amazon’s capital expenditures over the last 12 months have been approximately $52.3 billion while its charge for depreciation and amortization has been $29.7 billion. The opposite is the case for this coal company with capital expenditures having collapsed to $93 million while depreciation and amortization are significantly higher at $280 million. This is an industry that is clearly trying to conserve capital and is cutting back in the face of declining demand. With demand now coming back, there is not enough supply to satisfy that demand and prices are skyrocketing as the previous chart showed.

I’m intending to hold the stock to see if my hypothesis plays out. I’m betting on the company producing significantly more cash flow given the materially higher prices for coal and increasing demand and therefore being able to increase the dividend and that its stream of income will remain in place, albeit with volatility, for many years to come. And assuming that it can generate $300 million or so per year of pre-tax, pre-interest earnings then it is only trading at approximately six times its enterprise value. In addition, it is only paying out about $52 million in dividends compared to a peak of approximately $280 million so there is a lot of room for the company to return more capital to shareholders as cash flow increases. As a comparison, apartments, which have a great future, are in many cases trading at over 30 times their cash flow stream. This is the tradeoff between certainty and uncertainty. Icahn would make the case that companies who have survived in the coal industry have a much better future than what is priced into the stock and that investors will be rewarded with healthy dividends and/or stock buybacks. Take advantage of the pessimism and uncertainty as there is often a high price for perceived certainty.

It would appear that the transition to alternative energy is not going to go as smoothly as many would have hoped. And while the long-term trend line for hydrocarbons may be down, there is no doubt that the world will still need hydrocarbons for many decades to come, and right now the world is caught short and suppliers have strong pricing power. So what may be a long-term existential challenge for companies in the hydrocarbon business could be a short to medium-term opportunity for investors.