Oil Dropped Below $60-Markets Do Not Ignore Oil 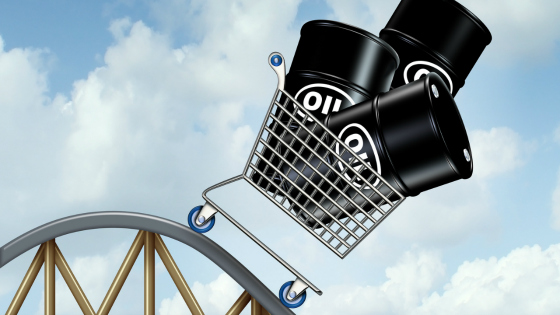 [Updated: April 13, 2016] I touched on the global markets having a whiff of deflation two weeks ago in this blog. It seems to have picked up speed. Today the Dow dropped by 300 points and 10-year Treasury yields dropped to much lower levels (2.08%) in the wake of a pretty spectacular drop in oil since August but really accelerating in October. Here is the oil chart. It’s actually dropped below $60 as this chart wasn’t updated through today. This next chart shows how volatility has spiked with the collapse in prices. Although it still hasn’t reached levels seen in 2011 and 2012, the jump in volatility has been pretty pronounced. That’s how markets work. Everything stays the same until they don’t. Wall Street veteran Laszlo Birinyi, called the drop in oil the black swan event that investors have been trying to anticipate. Unfortunately, black swan events materialize when very few people are thinking about them. Here is what he had to say:

“What we’ve seen is something people have been talking about for two, three, five years and no one is talking about it now,” said Birinyi, founder of Birinyi Associates. “It’s just a black swan.

“A totally unpredictable event. It comes clearly out of the blue. Four standard deviations out of anything else. In a case like that, there are no perimeters. How can you say it will go to $65 or anything else? My attitude is it’s the black swan, the Hurricane Sandy of the market, where you do not know where it’s going, but if you want to guess go ahead. But appreciate that you’re guessing.”

So what changed with oil? Clearly the Saudis took a shot across the bow of North American shale producers and said that the ball is in your court to be the producer with the spare capacity to adjust output higher and lower to regulate market pricing. We’re going to keep producing and get the price low enough to force you to slow down production if you’re not willing to do so voluntarily. Unlike the nationalized production of oil from Saudi Arabia, shale producers are comprised of many individual companies that do not answer to any larger governing entity like OPEC or ARAMCO. They do what’s in their best interest. Well, the Saudis are doing their best to convince them that slowing down production is in their best interest in the face of slowing global demand. The Saudis are willing to let prices drop to a level to stimulate more consumption and eliminate supply such that prices in two years or so will stabilize at a higher level with the Saudis having made it clear to North America, Russia, and Iran who is in charge.

A recent Bloomberg article stated that since 2010 $550 billion in loans and bonds have been issued for energy firms. As Don King is famous for saying, “Only in America!” In the aggressive search for yield as the Fed cut interest rates and embarked on three rounds of quantitative easing, investors have embraced the shale revolution by doling out extraordinary amounts of debt capital to these firms. Most of these loans were predicated on oil prices not dropping much below $80. With prices now having breached $60, defaults will be imminent without a snapback in prices, which I do not foresee for awhile. A brutal price war has begun and the Saudis will not take any prisoners. The American consumer should benefit nicely, although it’s not so cut and dried since so many energy-related jobs were created over the last four years that layoffs there will have some countervailing impact.

North Dakota is more challenged than Texas in terms of the negative economics of lower oil prices because its transportation costs are estimated to be at least $14 per barrel more than Texas’. This is not to say that Texas won’t have its issues, particularly Houston, but I don’t think to the degree that North Dakota will because of the Texas cost structure and its much bigger and more diversified economy. In addition, the massive petrochemical construction that’s taking place in the Gulf of Mexico should benefit from lower energy costs as well.

With all that being said, however, I do believe that shale producers will now focus on getting ruthlessly efficient in terms of drawing more oil out of the wells they’ve drilled. George Gilder has said that one should waste what is in great supply to produce what is in short supply. Shale operators accessed cheap capital and essentially wasted that to produce what was in short supply, which was oil. With capital being cut off as a result of the dramatic price drop now capital must be conserved and operators must now focus on becoming ruthlessly efficient in terms of getting more oil out of the wells they have already drilled at the expense of drilling more. With shale there’s not a question of whether the oil is there, it’s only at what cost can it be extracted. Costs took on a lesser priority as compared to growing one’s portfolio of drillable acreage. That’s not to say that costs haven’t come down, it’s just for many operators staking a claim to a lot of acreage using borrowed money was the higher priority.

Thus, it’s possible that shale operators are able to cut the depletion rates down significantly and be able to get more oil out of the ground with fewer wells and lower their break-even costs. And for those firms who can’t do this, then they will have to be absorbed by those who can. Perhaps we could have a virtuous circle where North America, particularly Texas, continues to produce meaningful amounts of oil, prices stay low, the consumer benefits, and the economy keeps growing. This puts the Federal Reserve in an interesting situation.

While the Federal Reserve seems a bit more hawkish, markets are telling them they are missing the boat. Inflation expectations are cratering, Treasury yields are falling, and the U.S. dollar continues to strengthen as the United States is one of the strongest economies in the world right now. China is slowing, Europe is a basket case, Latin America has its challenges, and the Middle East is facing economic risks because of oil prices. The Fed runs the risk of having the dollar explode higher if it chooses to raise rates in mid-2015 in the face of such global weakness. This can result in a tremendous number of defaults among emerging market borrowers that borrowed large amounts of capital denominated in dollars and now may have to repay them with a much more expensive dollar. This will result in reduced consumption and put more deflationary pressures on the world economy.

One of my favorite lyrics is from the Oasis song called All Around the World. Liam Gallagher sings, “These are crazy days but they make me shine.” This is how I feel right now. I love times of uncertainty that call for deep thought to try to assess the effects of what has taken place and how events in the future may unfold. There are a lot of uncertainties we’re wrestling with right now. We’re particularly trying to assess the impact on Houston since we have a number of properties there. It does have one of the best medical centers in the world, a robust port, a huge petrochemical industry that can benefit from lower energy input costs, as well as being the global center for technical talent in the energy industry. Thus, there are some non-energy drivers that can continue to do well and benefit from having to spend less at the pump. While we’re not quite sure how all of this will play out in Houston in the short run, we do feel confident that our focus on variable rate financing will continue to pay dividends in this falling interest rate environment, despite what the Fed is saying about future rate hikes.

[UPDATE] In 2016, oil hit an all-time low of $27 per barrel. It settled at $26.21, the lowest point since 2003. U.S. stock markets followed by declining sharply. The Dow fell by as much as 400-plus points and the Nasdaq moved 20% below its most recent high. In April 2016, crude oil prices rebounded more than 30% to $36 a barrel. Parts of the stock market viewed the change in oil prices as a signal of an improving global economy. As mentioned when this article was originally written, don’t ignore oil! Let’s see what the future holds.

There will be more turbulence in oil prices.  Stay tuned as this story is just beginning to unfold.