The Hard Truth for your Children - Build up Your Soft Skills

There is no doubt that technological innovation has automated more tasks and this will only become more pronounced with the greater use of artificial intelligence and robotics. This has created a greater demand for workers who have “soft” skills since routine job tasks are becoming more automated or commoditized.

At CWS, starting in the mid to late-1990s, we began to emphasize investing in markets that would be attractive to knowledge-based workers because we believed that their earning power would be much greater than more front-line, service, and blue-collar workers. One can see that labor’s wage share of GDP has been dropping since 1975 and started a precipitous decline beginning in 2009 or so. At the same time, corporate profits have recovered all of the ground it lost from 1969 through 1995. The last 10+ years have not been kind to labor, particularly those lacking the soft skills employers need so badly. Corporations, especially large technology companies, however, have prospered amazingly well. When growth is hard to come by then it’s important to invest where the growth is. And the growth is obviously in the tech economy and in those industries that are innovating rapidly through the effective adoption and implementation of productivity-enhancing technology tools and systems. As a result, there is an increasing emphasis on hiring highly-skilled, knowledge-based workers.

This area of the economy can afford to compensate these workers at levels far above the average because of the powerful economics these winner-take-all companies are able to operate under. Technology platforms like Facebook, Apple, Google, Salesforce, etc., which have huge network effects that lead more people to be part of their networks because that’s where so many people are already, results in huge marginal profitability for these firms and wealth creation for management and workers who have equity via direct ownership and/or stock options.

The marginal cost of adding another person to Facebook is almost $0 such that any revenue new customers generate can largely fall to the bottom line. This is very different from the apartment communities which CWS buys. Assuming we cannot add any more units, we are limited to generating higher revenues by pricing power and/or increasing occupancy. Of course, once occupancy reaches a certain level, then we can only generate more revenue by increasing rents and/or other income. The aforementioned firms are able to increase their revenues by adding new customers that cost very little to bring on and add a lot of value by increasing the size of the network whereas we would have to build new units to meaningfully increase our revenues beyond our pricing power.

Our hypothesis has turned out to be correct in that the college wage premium (representative of betting on knowledge-based workers) has grown over the last 25 years+ and is now quite substantial as this chart shows. The premium is very consistent for both men and women. 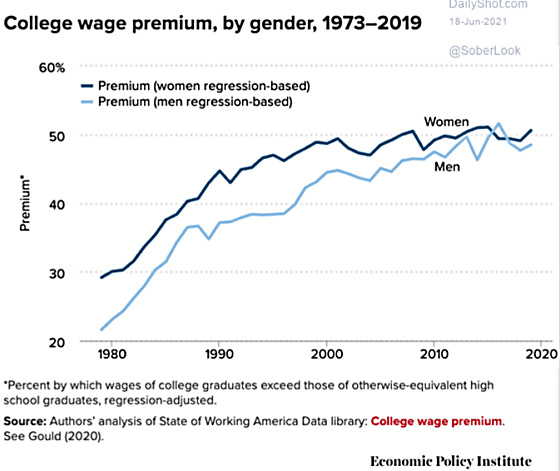 The following chart is particularly interesting since there is a lot of controversy regarding standardized tests and whether they are biased against disadvantaged people and people of color. This chart shows that one’s scores are a strong predictor as to whether one will finish college or not. This holds for all income levels. One can see what an advantage well-off kids have in terms of having the backing and support to hang in there and see college through to completion versus lower-income students. Regardless, there is a significantly higher chance that a kid with good test scores will finish college which probably speaks to their preparation, ambition, drive, commitment, intelligence, etc. One of the trends I’ve been following and writing about over the years is the increasing disparity in the numbers of female college graduates relative to men. 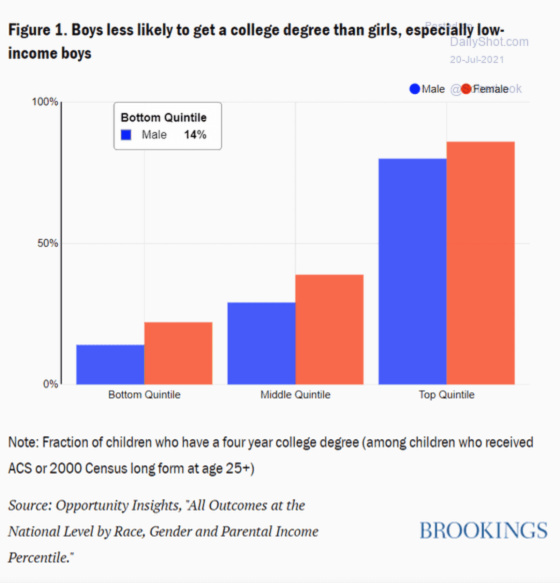 The Wall Street Journal recently wrote about this as well. Here are some of the salient points from the article.

Men are abandoning higher education in such numbers that they now trail female college students by record levels.Click To Tweet

At the close of the 2020-21 academic year, women made up 59.5% of college students, an all-time high, and men 40.5%, according to enrollment data from the National Student Clearinghouse, a nonprofit research group. U.S. colleges and universities had 1.5 million fewer students compared with five years ago, and men accounted for 71% of the decline.

This education gap, which holds at both two- and four-year colleges, has been slowly widening for 40 years. The divergence increases at graduation: After six years of college, 65% of women in the U.S. who started a four-year university in 2012 received diplomas by 2018 compared with 59% of men during the same period, according to the U.S. Department of Education.

In the next few years, two women will earn a college degree for every man, if the trend continues, said Douglas Shapiro, executive director of the research center at the National Student Clearinghouse.Click To Tweet

No reversal is in sight. Women increased their lead over men in college applications for the 2021-22 school year—3,805,978 to 2,815,810—by nearly a percentage point compared with the previous academic year, according to Common Application, a nonprofit that transmits applications to more than 900 schools. Women make up 49% of the college-age population in the U.S., according to the Census Bureau.

This will have some interesting societal implications. It will get increasingly more difficult for college-educated women to find college-educated men as spouses. I know this sounds elitist but women will have to lower their standards and “marry down” if a college degree is one of the defining characteristics of a mate with high earning power or the potential for that. And while there are plenty of smart and successful people who don’t have a college degree and there is a lot of truth to Mark Twain saying that he “never let schooling get in the way of his education”, statistically speaking the earning power of those who don’t get a college degree is substantially less than those who have them.

I read a fascinating paper called The Growing Importance of Decision-Making on the Job. The author focuses on the growing demand for decision-making and its impact on life-cycle earnings. According to his research, “the share of all jobs requiring decision-making increased from 6 percent in 1960 to 34 percent in 2018, with nearly half of the increase occurring just since 2007.” This shows how automation and technological deployment has hit critical mass and are now growing exponentially. And the need for decision-making skills isn’t just shifting to particular types of jobs, but within occupations,” suggesting that growing demand for worker decision-making is an economy-wide phenomenon.”

With a greater need for decision-making, peak earnings are now occurring later because experience compounds and leads to better judgment, intuition, and decision-making skills. According to the author,

[T]he ability to adapt to unforeseen circumstances is one reason a firm might choose to employ labor rather than capital. Machines can increasingly be programmed to do any one thing better than a person, but people are more flexible. Highly-paid workers are valuable not only because they know how to do, but also because they know what to do…Thus experience is a form of human capital when it helps workers make better decisions.

Something I found particularly interesting is what the author says about intelligence. He asserts that it “is positively correlated with patience, willingness to take calculated risks, and social awareness, all attributes that should improve decision-making. People with higher measured cognitive skills learn games of strategy faster and make better decisions over time.”

And citing other research about the importance of “cognitive reflection”, the author asserts that it “is correlated with cognitive ability and risk preferences and predicts avoidance of behavioral decision errors.” And what is “cognitive reflection”? It’s “the ability to resist an intuitive answer and activate conscious cognition.”

I have experienced this first hand in seeing how these attributes are very much present in people who have had great success. They are highly effective strategic thinkers, they are thoughtful and patient, and while they do trust their instincts, they have a process to vet their thinking and hypotheses to make sure they are looking at the risks and rewards with clarity and try to manage through their biases.

And it’s not like these skills have a short shelf life as they tend to persist, grow, compound, and become more valuable. It truly is brains over brawn. The result is that, according to the author,

In 1960, earnings of full-time workers peaked in the late 30s, compared to the mid-50s today, and the magnitude of life-cycle earnings growth has more than doubled over this period…Wage growth after age 35 is substantially greater for workers in decision-intensive occupations.

I could go on and cite more relevant excerpts from the paper but the bottom line is that judgment, leadership skills, the ability to organize and grow teams and people, communicating effectively, adaptation, ingenuity, emotional control, and a whole host of other abilities combine to comprise soft skills. Of course, learning facts and figures are important for our kids, but the real treasure is in developing these skills as they are far more valuable than only relying on one’s memory. These are the skills that will help them grow and prosper in this fast-changing 21st-century economy that will continue to deploy technology and automation at a mind-boggling pace but will also need a tremendous number of people to develop and manage them as well as help lead organizations through uncharted waters in ways that they cannot only survive, but thrive.