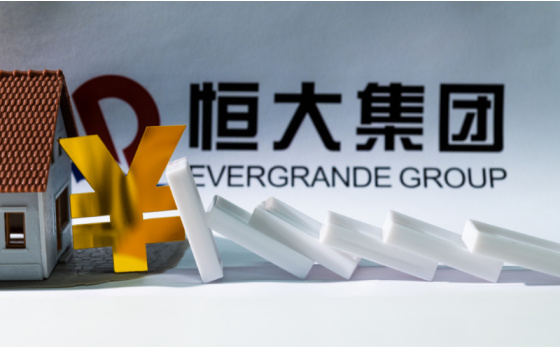 China has been capturing a lot of headlines with the implosion of the country’s largest homebuilder, Evergrande. It has an estimated $300 billion in liabilities and approximately 1.4 million homes under construction or with deposits obligating them to build homes in the future.

This is a big deal as a disorderly collapse of the Evergrande Group can have huge ramifications on the economy and social stability. It is the world’s most indebted real estate developer. It has approximately $19 billion of publicly traded junk bonds that are now trading at less than $.25 on the dollar. The government made domestic interest payments that came due but on Friday the Wall Street Journal reported that U.S. dollar bondholders did not receive their scheduled interest payments.

I thought this chart was interesting to show how high housing values are in China and Hong Kong relative to household income compared to other major cities around the world. 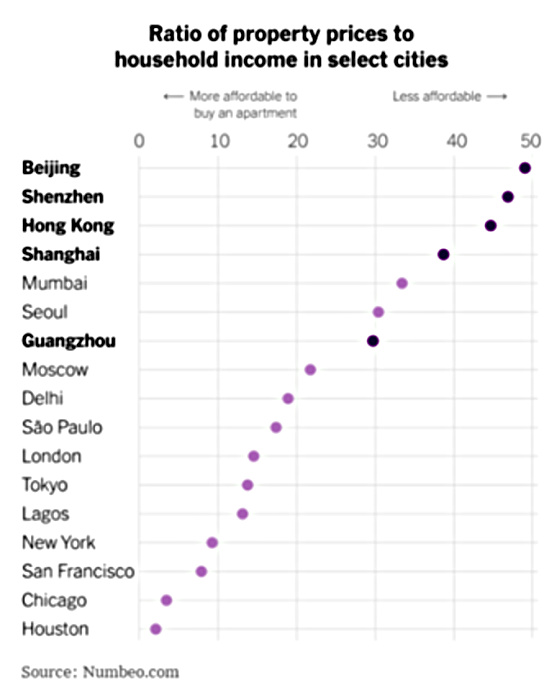 The purpose of this post isn’t to focus on China’s housing situation but to highlight major events and stories that show how China is aggressively reigning in hugely successful companies controlled by rockstar business people and how it is trying to flex its muscles on the social and military fronts.

We are incredibly interconnected with China so, unlike the cold war with the Soviet Union in which we had minimal economic ties, any escalation with China can have tremendous economic consequences. It seems like China is pulling in economically except where it can use its economic power to further its geopolitical objectives (e.g. secure resources, Belt and Road initiative, constrain the U.S., etc.) while flexing its muscles more aggressively militarily and diplomatically.

Let’s first turn to how China is cracking down on some of its wealthiest and most successful entrepreneurs and companies. 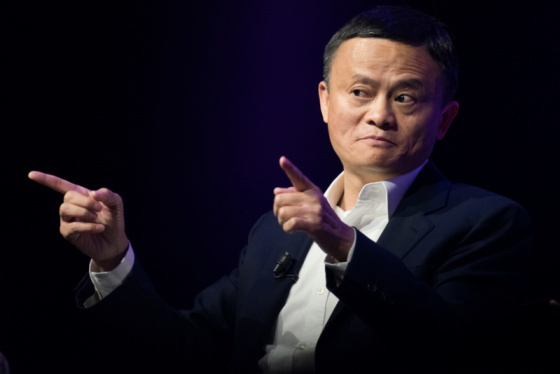 Jack Ma, the founder of Alibaba, one of China’s most innovative and successful companies, gave a speech on October 24th, 2020. He criticized authorities for banking rules and regulators’ interference in business. He referred to them as an “old people’s club” and declared that “the game in the future is about innovation, not just regulatory skills”. Ma concluded China didn’t have experts who could make appropriate policies to drive that.

Ma’s timing could not have been worse. The following is from an article about Jack Ma in the aftermath of his infamous October speech.

Days later his other company The Ant Group – the world’s largest Fintech company – was due to have its initial public offering (IPO).

The IPO was valued at US$37 billion and had been oversubscribed 870 times with US$2.8 trillion of orders for shares in China, Forbes reported. But Ma was instead summoned to Beijing for some “re-education”.

“Regulatory interviews” were conducted, according to the Chinese press, with the company reporting “views regarding the health and stability of the financial sector were exchanged”.

The next day Ant’s IPO was abruptly canceled and Ma hasn’t been seen since. “We mean being actually observed, and verifiably photographed, in public, and at liberty,” Forbes says.

This is what has happened to Alibaba’s stock since October 2020. It has not been pretty for shareholders. 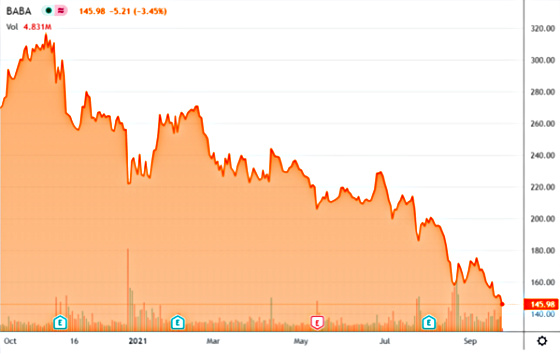 Didi, the Uber of China, has also been in the crosshairs of China’s communist leaders as the following headline shows.

The founder started Didi with $15,000 of his own money and $110,000 from his boss at Alibaba. In the nine years after founding Didi, he built it to 160 million active users, which is nearly double Uber’s worldwide. After going public, however, Chairman Xi and his cohorts went after Didi because it felt the company had too much power with the data it controlled about its customers. This is what has happened to the stock since then. 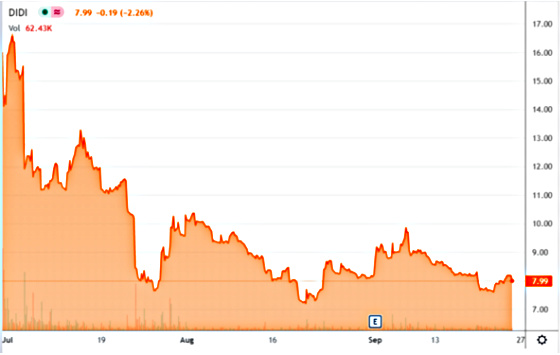 The government is also going aggressively after casino firms.

Macau, the gambling hub of China, has gotten crushed during Covid-19 and after recovering a bit, is now back on a downtrend. 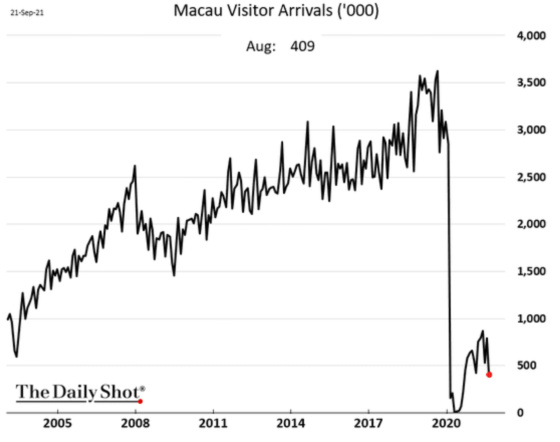 And then there is this hot off the press.

China is now aggressively going after other aspects of the economy it doesn’t control such as cryptocurrencies.

The government is getting even more involved in social engineering. In this case there may be a lot of sympathy among American parents.

Tencent, one of the largest gaming companies in the world, has seen its stock drop quite significantly in the wake of China limiting gaming time for kids. To be fair, however, it was dropping before this and the decline may have been attributable to the government going after some of the largest non-state-owned enterprises of which Tencent is surely one. 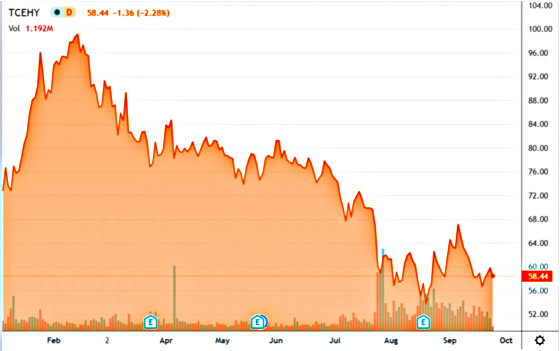 This next chart shows that 9 out of the top 11 most surveilled cities in the world are in China, which is probably not very surprising. 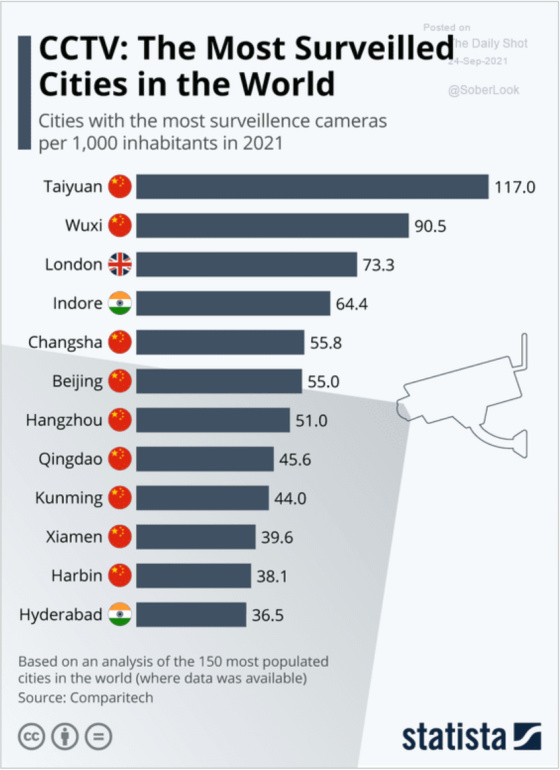 Tensions are increasing with Taiwan as China takes a much more aggressive stance to it and the world’s greater engagement with the island nation.

September 18, (THEWILL) – Taiwan’s air force scrambled on Friday to warn away 10 Chinese aircraft that entered its air defence zone, Taiwan’s defence ministry said, the day after the island announced a $9 billion boost to military spending to counter the threat from China.

To counter the perceived growing Chinese military threat in Asia, the United States is working more closely with Japan and starting to ramp up the Quadrilateral alliance which I will address shortly.

Efforts to contain China are now taking on a greater sense of urgency with the establishment of the Quad, comprised of the United States, Australia, India, and Japan.

The Quad is one of the reasons that Australia backed out of the $66 billion contract with France to supply diesel submarines and now is pivoting to purchasing nuclear subs from the United States and Great Britain. This decision by Australia has created tremendous tension between the United States and France but it just shows the incredible importance we are placing on containing China even if it comes at the expense of harming our relationship with a major European ally. With that being said, there is more information coming out detailing how Australia had grave concerns about going through with the purchase due to concerns about cost overruns, timing, and capabilities.

I strongly encourage you to read this fascinating article that discusses the results and analysis of some very elaborate game theory modeling of the consequences of the Quad being established. The belief is that China is getting in its own way and is its own worst enemy and will continue to create harmful responses to its actions that will not be in its long-term interest.

What About China’s Real Estate?

From an investor’s perspective valuations are highest when there is the greatest perception of security, confidence, and a rosy future. When investors perceive great risk and uncertainty then valuations are much lower. Capital flows are robust when the former set of circumstances are in place and much more constrained in the latter. The following charts show how capital flows are decreasing significantly to fund Chinese firms by venture capitalists and real estate investment is drying up as well. 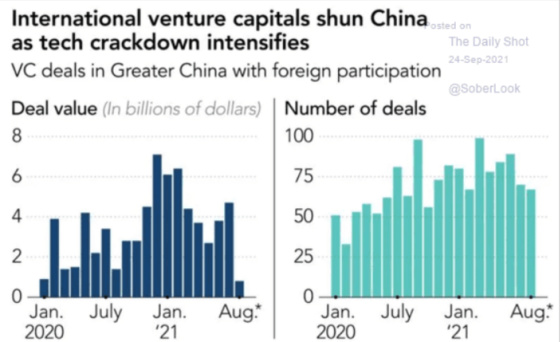 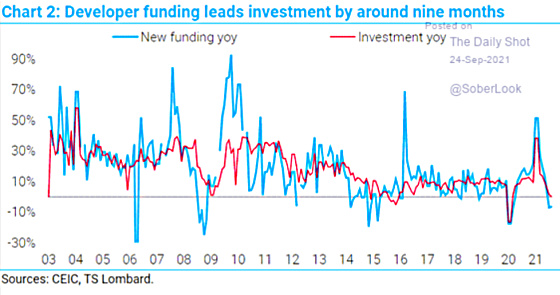 One can see how the number of new housing projects in Beijing and Shanghai has dropped quite significantly which correlates to the decreasing new funding shown in the chart above. 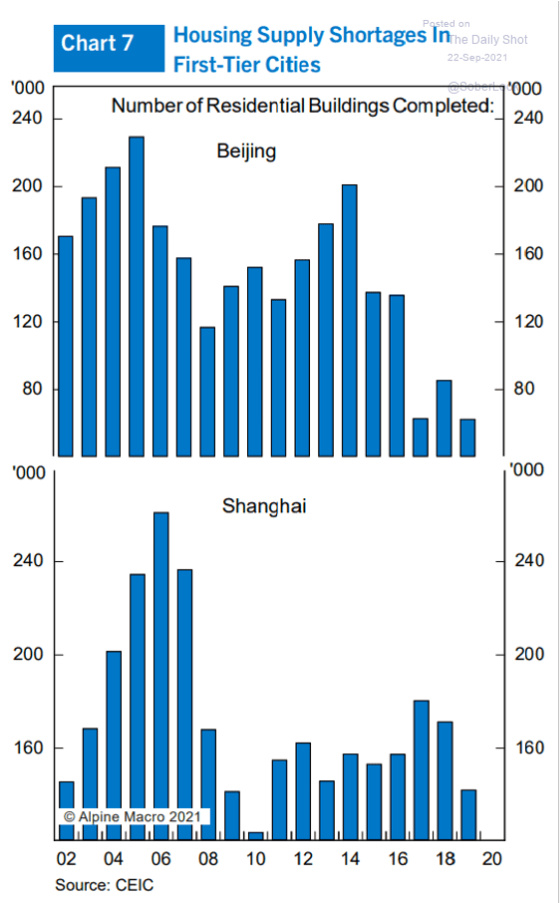 The result of this from a real estate investor’s perspective is that developers and owners in China and Hong Kong are cheap on a historical valuation basis. 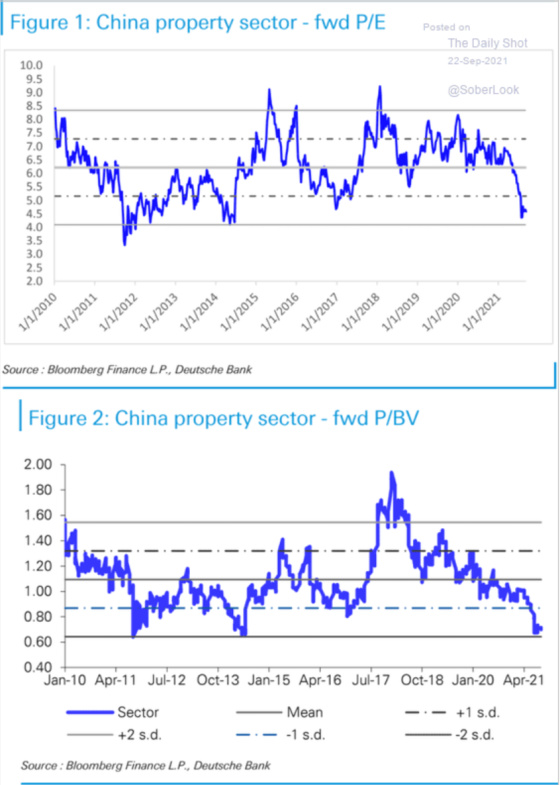 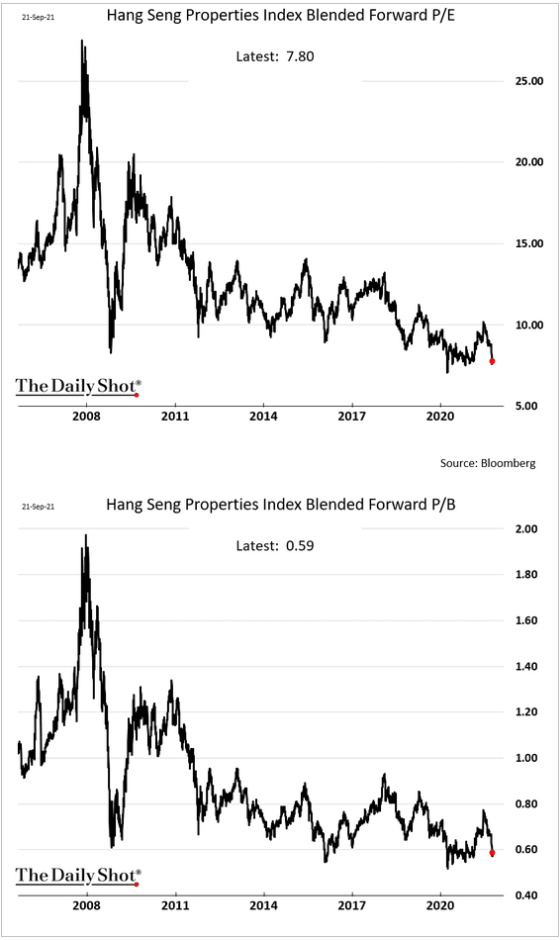 The Rothschilds were famous for saying to buy when there is blood in the streets. I hope it doesn’t get to that point but China real estate firms appear to be quite a contrarian play for those who have a very strong tolerance for risk and volatility.