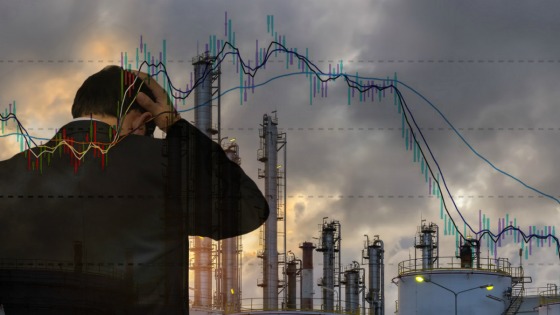 Yet again we have witnessed something unprecedented. As the following two charts show, we have never had negative oil prices until last week. Oil has never been cheaper on an inflation-adjusted basis than it is today. 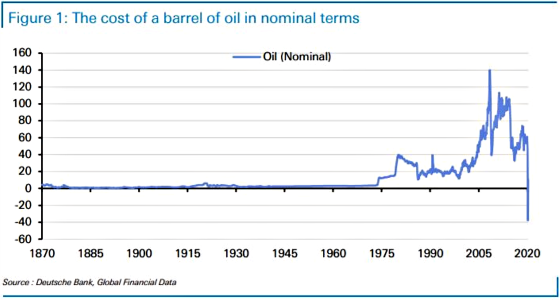 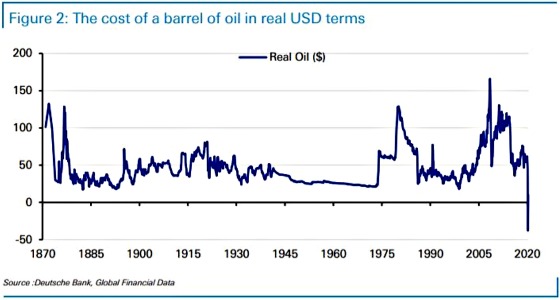 And while under “normal” circumstances this would be great for the consumer, akin to a tax cut, this is a byproduct of a cataclysmic forced economic contraction to fight COVID19 which has decimated demand for energy. People need lower gas prices because their incomes are either cut or at long term risk due to the shutting down of the economy and uncertainty as to when it will open and what businesses will re-emerge. Lower gas prices will not stimulate spending in other areas. They are a necessary adjustment because consumers can afford less of everything now than before. It’s a deflationary adjustment.

So what happened to lead to the May 2020 futures contract trading for as low for nearly negative $40 per barrel?

Before answering that, let’s first look at a chart of the price trajectory of that futures contract. 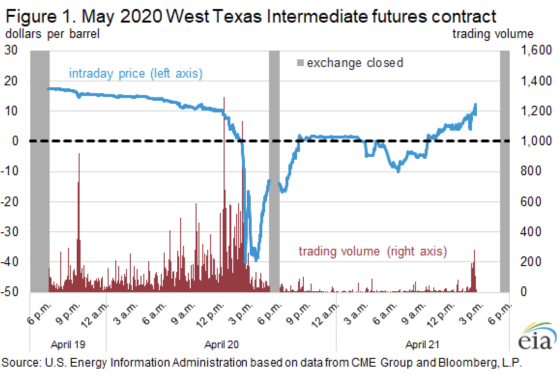 One can see that it seemed to follow the path Hemmingway took towards bankruptcy that he described in The Sun Also Rises:

“How did you go bankrupt?”

Similarly, the price started off deteriorating gradually and then it suddenly fell off of a cliff only to then recover somewhat over the next day. So what happened to those left holding the bag who had to pay buyers to take these futures contracts off of their hands? This is from the Energy Information Agency (EIA):

So what actually happens when a futures contract for WTI expires?

There are two options. The first is that the owner can sell it for cash or roll into a futures contract with later expirations. The second and less common option is for the contract holder to take physical delivery of crude oil. The oil must be delivered to a pipeline or storage facility in Cushing, Oklahoma. This is where COVID-19 combined with the scorched earth policy of the Saudis to keep pumping oil regardless of demand to oversupply the market to crush higher-cost producers to set up a situation that could lead to negative oil prices.

Back to the EIA’s explanation.

Under normal conditions, taking delivery of crude oil at Cushing is straightforward. Buyers can have the oil transferred into a storage facility or pipeline that they own or lease. Or, with the seller’s consent, they can transfer ownership of the crude oil somewhere else in the pipeline and storage system.

Normal physical settlement has been disrupted, however, by the recent decline in the availability of uncommitted crude oil storage capacity. Because of the impact of the 2019 novel coronavirus disease (COVID-19) on economic activity and the consumption of petroleum products, U.S. consumption of crude oil and petroleum products has sharply declined. As of the week ending April 17, U.S. refinery runs fell to 12.8 million barrels per day (b/d), 4.1 million b/d (24%) lower than the same time last year.

As a result of this extreme demand shock, excess imported and domestically-produced crude oil volumes have been placed into storage. Crude oil storage facilities at Cushing have 76 million barrels of working storage capacity, of which 60 million barrels (76% after accounting for pipeline fill and stocks in transit) were filled as of April 17 (Figure 2). Although Cushing has physically unfilled storage available, some of this physically unfilled storage is likely to have already been leased or otherwise committed, limiting the uncommitted storage available for contract holders without pre-existing arrangements. In this case, these contract holders would likely have to pay much higher rates to storage operators that have uncommitted space available.

This is where we have the game of Hot Potato kicking in as the inability to take delivery due to having nowhere to store the oil required owners of these contracts to find buyers to take them off of their hands at lower and lower prices.

The geopolitical implications of this will be very interesting in terms of how it impacts Iran, Russia, Iraq, and Venezuela, just to name a few of the potentially severely affected countries. If we’ve been bewildered by the risks of geopolitical conflict and ever-present tensions throughout the world, then I expect things to get even dicier as regimes get more desperate, particularly Iran which has been stifled by the ramping up of sanctions, the impact of COVID-19 on its economy, and domestic unrest. Autocratic regimes backed into a corner don’t just scrunch up and accept what’s given to them, they tend to fight back aggressively because their survival is at stake. And by stoking tensions, two objectives may be accomplished. One is that it may increase oil prices and two it may give the regime more leeway to crack down domestically to maintain power and to position the United States as an enemy that only the regime can defend against.

Prepare for even more global tensions!

Domestically it will be brutal for shale producers in the short and medium-term as it is no longer economic to produce oil right now and many are at risk of going bankrupt or liquidation. The following chart from Knowledge Leaders Capital is a key metric they use to gauge the financial risk of oil and gas companies and it’s not pretty. Based on their estimates, they believe that up to ⅔ could go out of business or be merged over the next year. The author does point out that equity and bond prices are not painting as dire of a picture but time will tell. 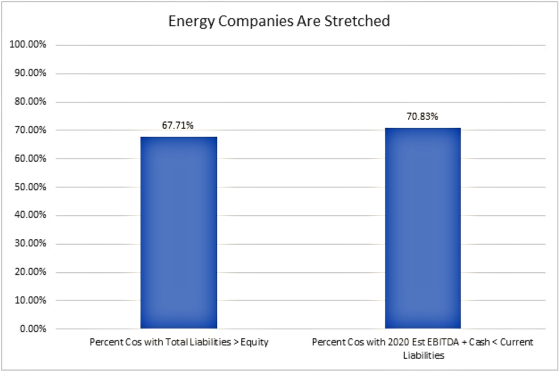 The only bright spot that I can see is that with such draconian cuts being made to capital expenditures in the energy industry, at some point we will hit a shortage and the supply that can be turned on the quickest is shale versus big fields and offshore projects. Regardless, this dramatic price recovery is probably a long way off unless OPEC cuts dramatically and for a sustained period of time.

In the interim one has to anticipate a lot of economic pain for the Permian Basin and probably Houston, as well as the energy industry, works through this vicious contraction.