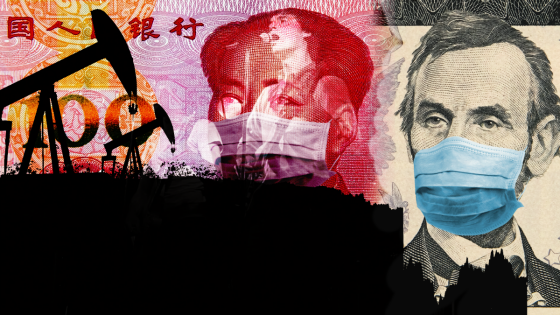 The title of this blog is from the Talking Heads song Life During Wartime. Maybe I should have called it Life During Quarantine instead but we are definitely on a wartime footing. If you don’t think so then maybe these charts might help convince you as financial markets are the most real-time indicator of investor sentiment and discounting the future to ascertain how investors react to key events. In the case of the double whammy of the coronavirus global reaction and the Saudi-Russia oil price war, the reaction has been swift and brutal and exemplifies how markets can go up like escalators and drop like elevators.

According to Zero Hedge, the median stock is down 50% from its high and global losses have reached $25 trillion in the last month!

There has been a flight to three-month T-Bills which have brought yields close to 0%. 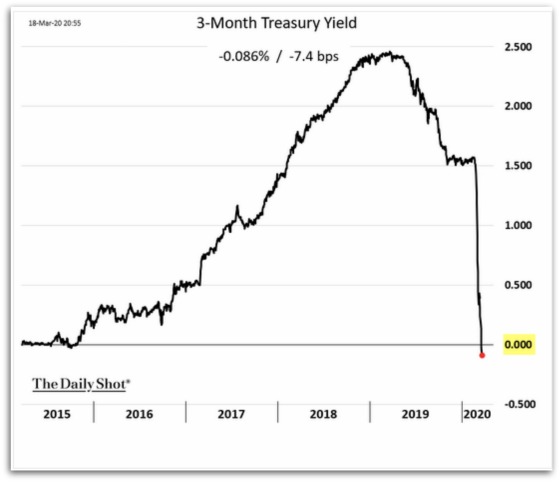 Credit markets have re-priced risk resulting in a dramatic widening of credit spreads as the following charts show. This downturn is more severe than 2008-9. 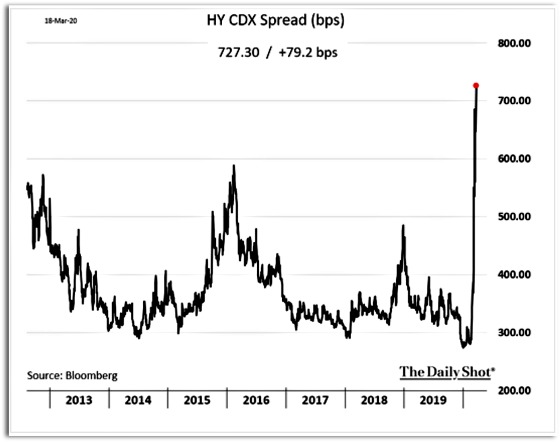 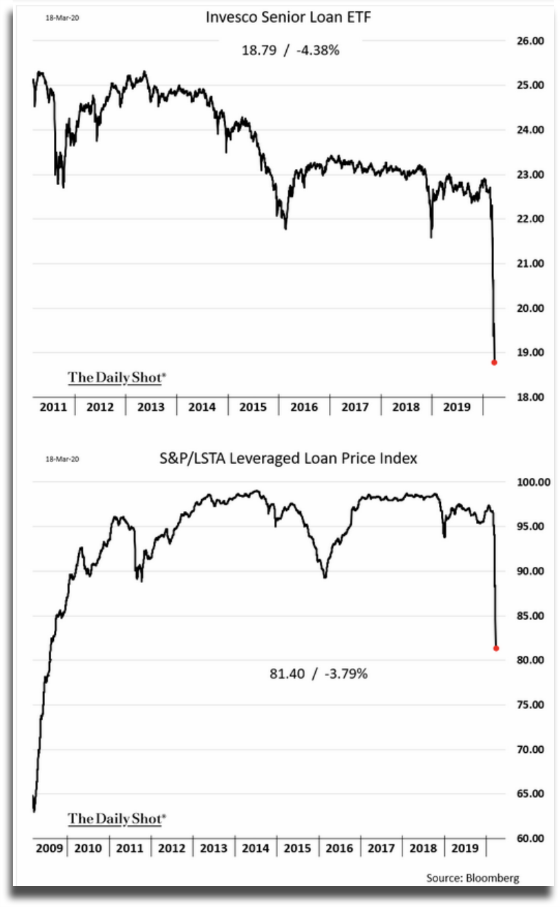 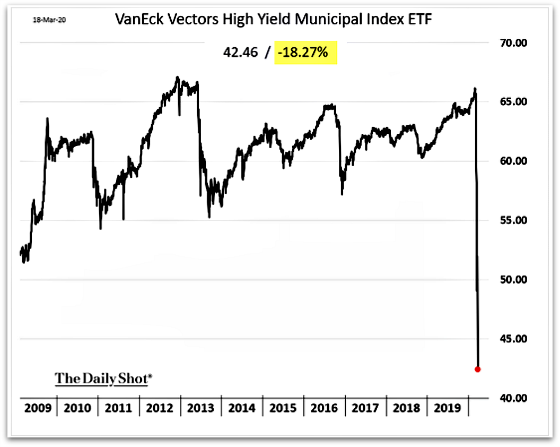 Commodities have been getting crushed as investors are pricing in a huge contraction in global economic activity. No commodity is considered more sensitive to economic conditions than copper. This chart is not very encouraging. 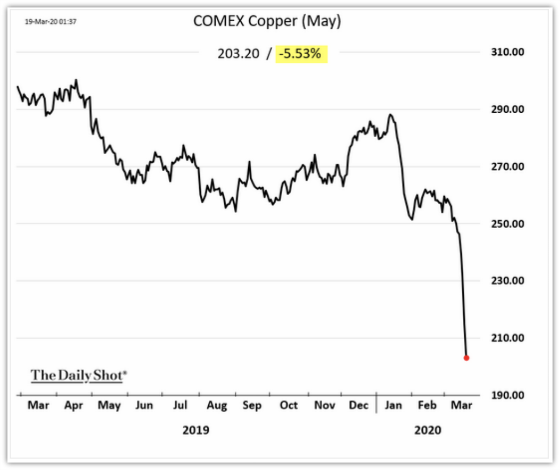 This chart shows how oil has been massacred after Russia did not agree to go along with the Saudi’s proposal to cut oil production. This led to a ferocious response by the Saudis to crash oil prices. Some oil market observers have said there’s even a possibility of negative oil prices if storage capacity is curtailed because of the tremendous excess supply. 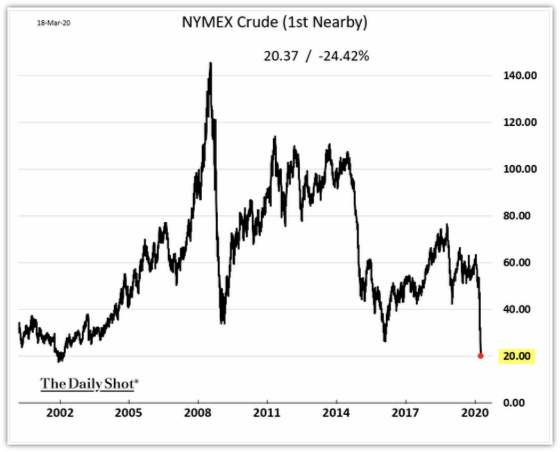 There is now the prospect of Texas actually considering limiting oil production, which hasn’t been the case since the 1970s as the following headline shows.

And the chaos of the coronavirus has come to this in my home state.

I now have to digress because I need a little humor to help me manage through this debacle. Zerohedge, the controversial financial website that is often accused of peddling conspiracy theories and having a proctologist’s view of the world as doomsdayers, nevertheless has some very interesting articles and is a site that I must visit to get a pulse on things. They also have a brutally honest and cynical point of view. Here is an example of their biting humor. They have been really hard on hedge fund titan Ray Dalio for declaring that “cash is trash” as the market was approaching its peak. This is what they had to say about that.

You see, back in late January when stocks were melting up to new record highs every single day, Ray Dalio speaking from the Coronavirus-free billionaire boondoggle of Davos put on his best momentum extrapolation hat on, and predicted that “cash is trash.” 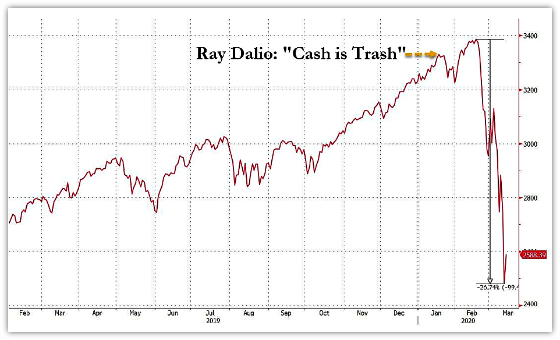 Little did Dalio know that just a few months earlier some Chinaman had bitten off the head of a typhoid bat, in the process setting off the apocalypse, and as the world literally ground to a halt amid a cascade of sovereign quarantines, global stocks suffered their biggest crash since Black Monday.

One of the important lessons I have learned in life is that perception is often reality so it doesn’t really matter what I think unless the divergence becomes so great that one can eventually profit from the inevitable re-converging of the two. There’s a side of me that believes that the cure may be worse than the disease. I must emphasize it’s a side of me and not all of me because I know it’s highly transmittable and can be quite lethal. So why is one part of me thinking this? It comes from reading the statistics about the H1N1 virus that was quite powerful and impactful. I did some research on it and this is what I found from the CDC.

Additionally, CDC estimated that 151,700-575,400 people worldwide died from (H1N1)pdm09 virus infection during the first year the virus circulated.** Globally, 80 percent of (H1N1)pdm09 virus-related deaths were estimated to have occurred in people younger than 65 years of age. This differs greatly from typical seasonal influenza epidemics, during which about 70 percent to 90 percent of deaths are estimated to occur in people 65 years and older.

I don’t think that most people today realize that an estimated 61 million Americans contracted the H1N1 virus and an estimated 12,000 died with many more worldwide about 10 years ago. With that being said, what seemingly makes COVID-19 more challenging is that its mortality rate is quite a bit higher than previous pandemics.

Since I believe we’re on a war footing, one natural association would be what happened after Pearl Harbor. I found the following.

The Dow Jones Industrial Average fell 6.3 percent in the two days that followed the attack. From 115.9, the index fell 2.92 percent to 112.52 on Monday, the first session after the attack. It fell another 2.89 percent on Tuesday.

Despite a short recovery attempt thereafter, the index was under pressure until the U.S. Navy’s victory at the battle of the Coral Sea in early May 1942, which gave confidence to the investing community that a resolution may be close at hand.

There is another perspective to the stock market performance. A report, quoting Ibbotson Associates of Chicago, said a person who bought U.S. blue chips and held them till end of 1945, when the World War II ended, would have generated returns in excess of 25 percent annually.

The recovery rebound is a telling proof of the indomitable spirit of investors, who have proved resilient enough to weather the many crises the United States has faced in the past.

Here are some charts as to what unfolded. 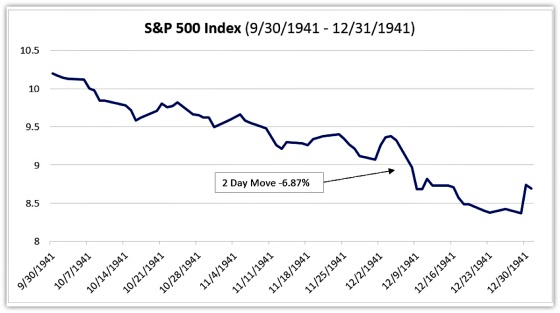 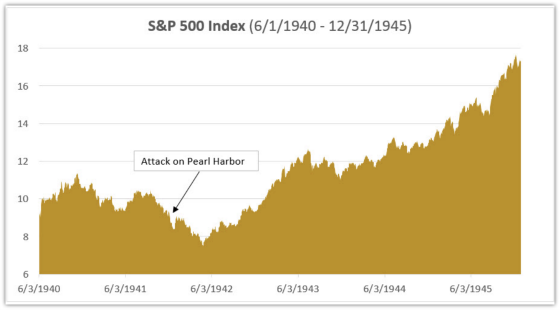 Source: Bloomberg. Date Range: 6/1/1940 – 12/31/1945. The performance data quoted represents past performance. Past performance does not guarantee future results. One cannot invest directly in an index.

Finally, since I came back from my trip no worse for the wear, maybe it had to do with covering myself with Dead Sea mud. 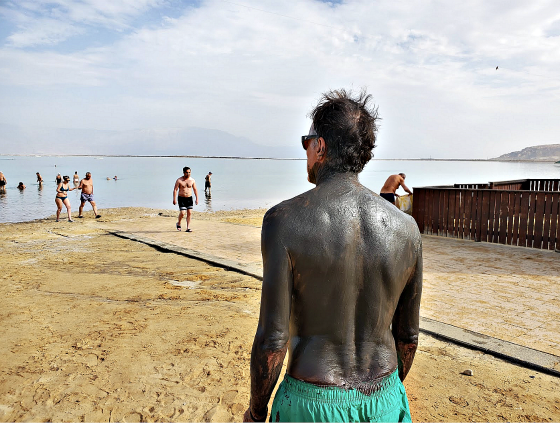 Good luck. Do your best to enjoy your sheltering in place.