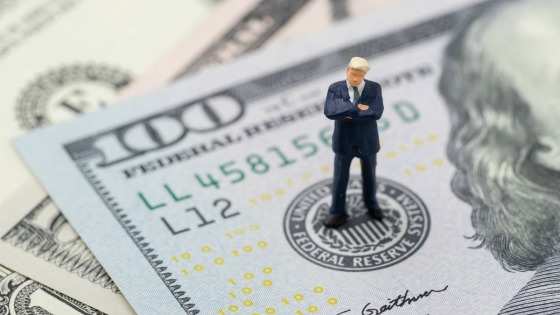 Federal Reserve Chairman Jay Powell officially altered the Fed’s reaction function during his virtual speech given for the annual Jackson Hole conference. More accurately he articulated its inaction function. Rather than being trigger happy to tighten monetary policy and raise interest rates as inflation reaches 2%, now they are going to focus more on the recovery of the labor market given the cataclysmic impact of COVID and the associated lockdowns and retrenchment of consumer and business behavior. In order to meet its dual mandate of maximum employment and stable prices, it has adjusted its view of stable prices over a long period of time such that inflation should average 2% during the cycle. Here is the Wall Street Journal’s interpretation.

While the Fed didn’t change its 2% target on Thursday, it said it would seek periods of above-target inflation if inflation runs below 2% following economic downturns to prevent expectations of future prices from sliding lower.

The Fed didn’t specify exactly how high or how long it would allow inflation to rise above 2%. 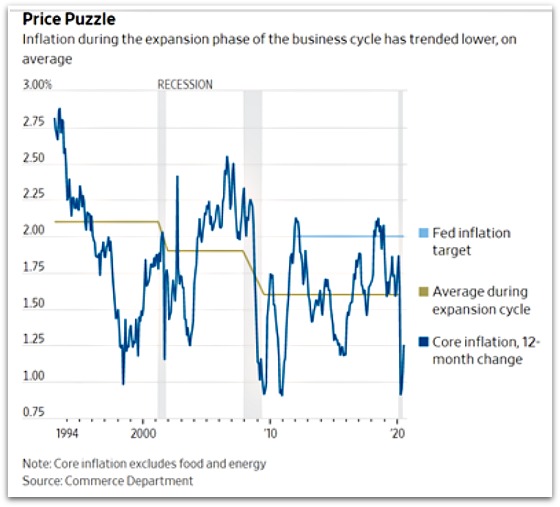 Here is another way of showing the variance of the Fed’s favorite inflation indicator, Personal Consumption Expenditures Index, around the 2% target. 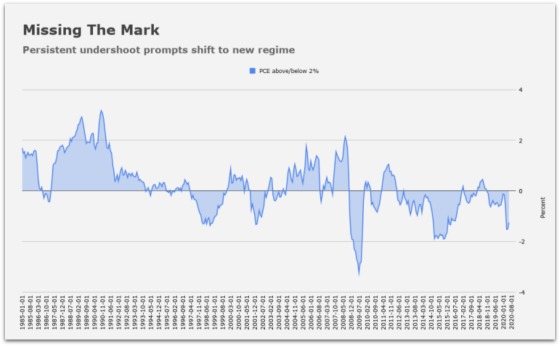 One can see that since 1993, the Fed has fallen below the target far more than above it. This has naturally carried over to interest rates as well. With declining inflation and other factors such as aging societies, excess debt, access to international labor markets, the financialization of our economy, etc., one can see how with each cycle short-term interest rates have been trending lower and lower. And with Powell signaling rates will remain low for the foreseeable future, he is just acknowledging what has been the trend over the last 30 years. 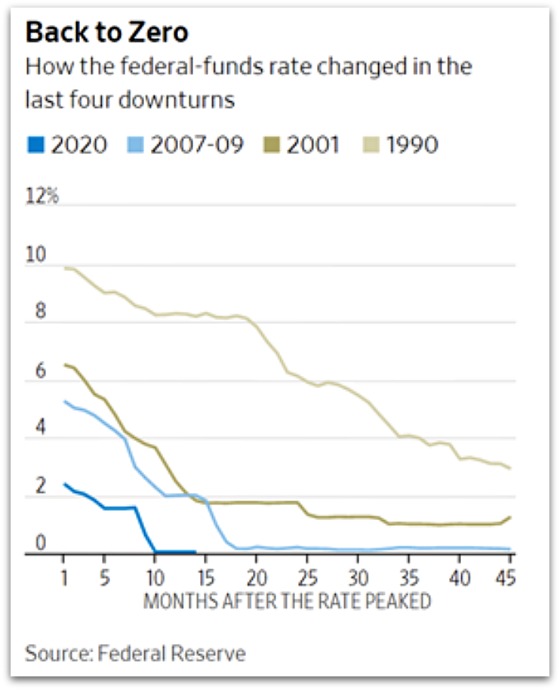 One can see from the graph above that each cycle has taken less time to hit the trough rates for the cycle. This current cycle took only 10 months while previous ones were approximately 20, 33, and 45 months. It shows how sensitive the economy is to interest rates when there are signs of economic cracks in the armor.

Richard Clarida, a Fed governor, acknowledged how the Fed has been using bad models and enough is enough.

This is a robust evolution in the Fed’s policy framework and, to me, reflects the reality that econometric models of maximum employment, while essential inputs to monetary policy, can be and have been wrong, and, moreover, that a decision to tighten monetary policy based solely on a model without any other evidence of excessive cost-push pressure that puts the price-stability mandate at risk is difficult to justify, given the significant cost to the economy if the model turns out to be wrong and given the ability of monetary policy to respond if the model were eventually to turn out to be right.

So there you have it. The Fed is admitting its models have been wrong, it’s approach to tightening monetary policy and raising short-term interest rates at the first sight of the whites of inflation’s eyes has only served to dampen inflation and let the economy run cooler than perhaps it otherwise would. This should continue to benefit variable-rate borrowers such as CWS as rates should stay close to 0% for at least another three years, if not more. If this transpires then this will continue to provide CWS with a lower cost of funds than fixed-rate alternatives while still allowing us to retain much greater prepayment flexibility. The actions we have taken over the last decade have given us the confidence to overwhelmingly rely on floating rate loans and have positioned us extremely well to capitalize on the Fed’s inaction function as over 80% of our loans are now variable rate.