The Road to Zero? 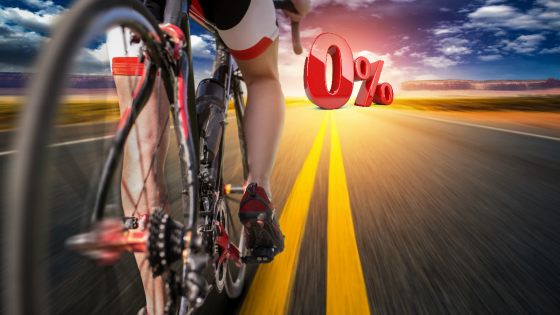 The market didn’t react very well to Jerome Powell’s characterization of Wednesday’s interest rate reduction as a “mid-cycle adjustment.” Investors took that to be a bearish easing of monetary policy. The stock market dropped, the bond market took a future interest rate reduction off of the table, and the yield curve narrowed as traders priced in slower economic growth in the future as a result. The following chart shows the continued compression of the yield curve as measured by the rate differential between the 10-year Treasury note yield and the 2-year yield.

President Trump did an effective job, however, of neutering Powell’s bearish easing by announcing that a 10% tariff will be imposed on the remaining goods coming from China that have not been subjected to tariffs as of September 1st. These represent consumer goods and will hit the pocketbooks of most Americans in the event retailers pass on some or all of these additional costs. The market sold off dramatically after this news and the 10-year Treasury note yield crashed through 2.00% and is in the 1.85% range while the spread between 10s and 2s is now approaching a cycle low (11 basis points) at 14 basis points.

Now that the Federal Reserve lowered interest rates for the first time in 11 years, I wanted to look at Libor cycles since it came into existence in 1986 to see if there are any conclusions we can draw about this next down cycle we are entering into. The following is a chart of 30-day Libor since 1986.

One can see that we have been on a slow downtrend over the past 33 years. The continuation of this trend is something that we have been betting on at CWS by being very heavy floating rate borrowers. I think an analysis of the cycles will show why this still has a decent probability of being a winning strategy going forward. Before doing so, however, I thought it would be interesting to share something I read last week from Moody’s about how important it is in terms of economic performance and the future direction of interest rates if this easing is truly a mid-cycle adjustment or a trend change. The paths are very different in terms of their economic impact. This is what Chief Economist John Lonski wrote:

Since 1984, there have been seven distinct series of Fed rate cuts. Four of the seven rate cut episodes occurred amid a mature business cycle upturn and managed to stave off a recession. They happened in 1985, 1987, 1995, and 1998. Each of the four successful rate-cut series helped to rejuvenate business activity and boost inflation risks by enough to eventually prompt a series of Fed rate hikes.

Let’s see what happens when rate cuts occur just prior to a recession. Back to Lonski.

For the three series of rate cuts that overlapped a recession—1989-1994, 2001-2004, and 2007-2015— the fed funds rate averaged a cumulative plunge of 581 basis points. Because the current fed funds rate of 2.375% cannot be slashed by more than 500 basis points, the next recession will probably include another installment of quantitative easing that is likely to drive the 10-year Treasury yield under 1.5%. Thus, recent consensus forecasts that have the 10-year Treasury yield remaining in range of 2% to 2.5% through the end of 2020 implicitly preclude a recession through 2020.

Lonski recommends paying attention to core business sales as a leading indicator of employment growth which has a big impact on the Fed’s perception of the health of the economy. Lonski says the following:

Since 1994, the correlation between the year-over-year percent changes of private-sector payrolls’ moving three-month average and core business sales’ moving 12-month average is a very significant 0.86. If the now 3.8% annual increase of core business sales’ moving 12-month average were to slow to the 2% of the three-months-ended June 2019, the average monthly increase of private-sector payrolls might fall under the 156,000 of 2019’s second quarter to something less than 75,000 new jobs per month. The latter would probably prompt deep rate cuts by the Federal Reserve.

Here is a chart showing a strong correlation between the two. 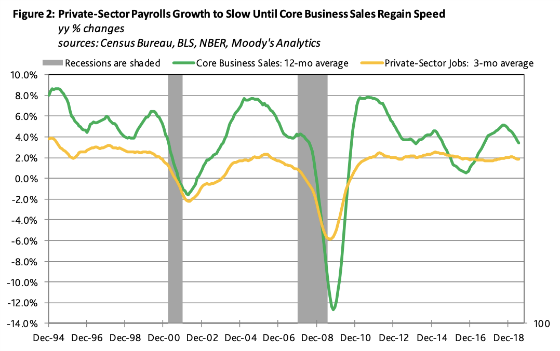 Turning to an analysis of the longer-term cycles, I put together the following tables. There have been four long upcycles and three long down cycles. These cycles incorporate the mini-easing cycles referenced by Lonski above.

One of the first things I noticed was the length of the cycles. The four average upcycles lasted 1,156 trading days, or approximately 4.5 years while the three down cycles had an average length of 1,190 trading days, very similar in length to the up cycles. Although seven data points are too small to generalize from, it is interesting how symmetrical the lengths are. If this down cycle follows these averages then we could see rates dropping and staying lower through early 2023.

The average increase during upcycles has been 4.00% while the average decrease has been 6.22%. The result has been lower highs as shown in the Peak column in the first table and lower lows as shown in the Trough column of the second table. As a result, the average 30-day LIBOR rate in each cycle has generally been dropping.

It’s interesting to note that the upcycle that started in May 2014 and ended in January 2019 and is one in which we have been heavily floating-rate borrowers, has only had an average Libor rate of 0.87%. Assuming an average spread over Libor of 1.90% this would translate to an average cost of funds of 2.77% during this upcycle, The 10-year Treasury yield on May 20, 2014, the day Libor hit bottom, was 2.17%. Thus, if someone locked in a 10-year fixed-rate loan on that day with the same 1.90% spread, then their interest rate would have been 4.07%, quite a bit higher than the average floating rate cost of funds during the 4.6 year up cycle while also not having the same pre-payment flexibility.

Based on Lonski’s analysis and the data from the table above, if this down cycle is a long-term cycle, then there is a very high probability that we will have rates close to zero percent again.

I have been in the camp that rates would be lower for much longer and the tables above reinforce this belief. Every cycle has a lower average Libor. If 0.87% is the average for the last cycle peak and Libor only hit 2.52% at its cycle peak, I do not see it exceeding this level in the next peak since so much debt was created at such low rates that the economy could not handle rates being materially higher as too many borrowers will find it problematic to refinance their debt which will require them to de-leverage, slow investment, and focus on defensive measures versus growth. This, in turn, will serve to bring interest rates back down again. Add to this the disinflationary demographic factors of the aging of the world’s key economies, I remain in the camp that rates are going to remain low for a very long time.

I believe we’re back on the road to zero percent – 0%.