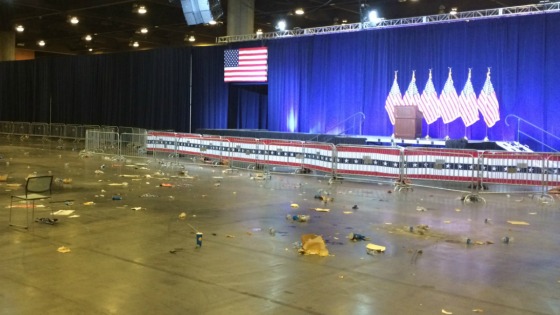 First of all, kudos to the tremendous participation among Americans in the electoral process. This election galvanized Americans into participating in the democratic process. Love or hate Trump; there is no question that he is a catalyst for stirring emotions and action. 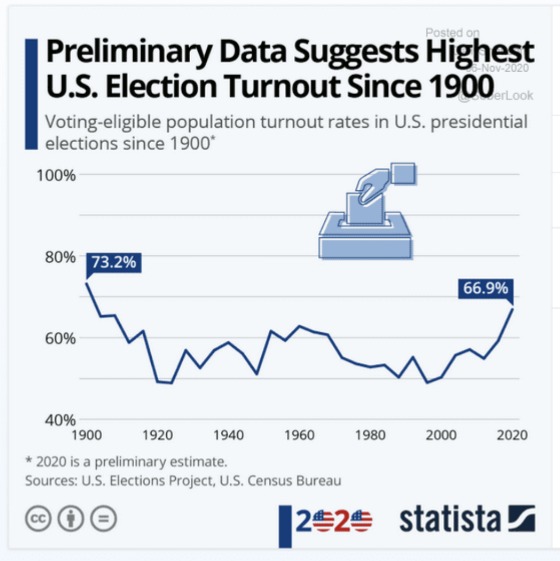 It was fascinating to see how markets reacted as information was released related to the election. Biden went into the election with betting markets believing he was clearly the front runner. As Trump started outperforming the polls and generating more votes than anticipated, the probabilities shifted. With Biden now having won Wisconsin and Michigan and most likely Arizona, Pennsylvania, and Georgia (as of this writing), he is now the overwhelming favorite to be the next president. [Saturday, November 6, 2020 – 11:25 AM the major networks including Associated Press called the election naming Joseph Biden president-elect.] 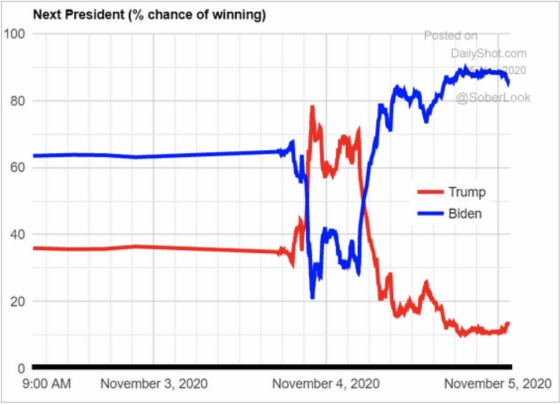 The stock market rose sharply as investors were pricing in a divided government with the Democrats having the presidency and the House, albeit with less of a majority and far weaker than going into the election, and the Republicans most likely holding the Senate as the following chart shows. 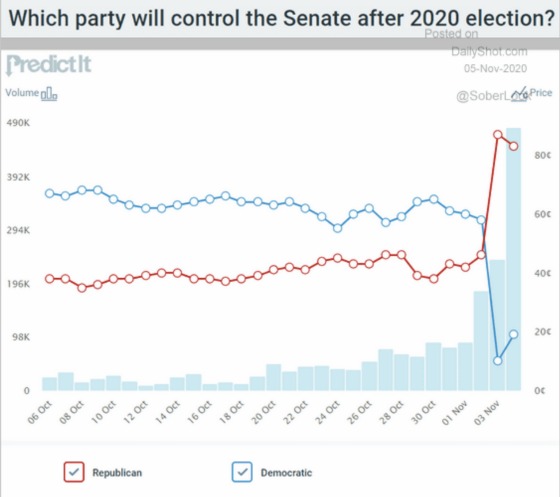 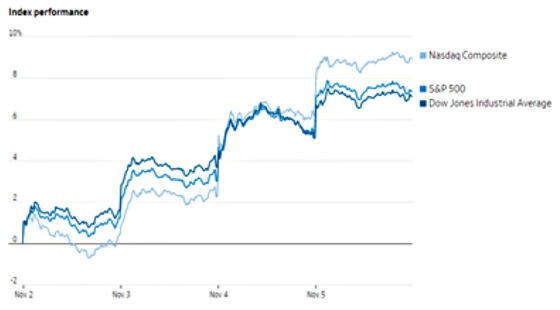 Investors now took the hyper-stimulus, reflation trade-off of the table, as evidenced by yields dropping back to pre-election levels. This chart shows break-even inflation rates for Treasury Inflation-Protected Securities (TIPS) investors. They are now betting on less inflation, with a Republican-controlled Senate providing a check on the Democrats’ desire to have extensive stimulus packages. 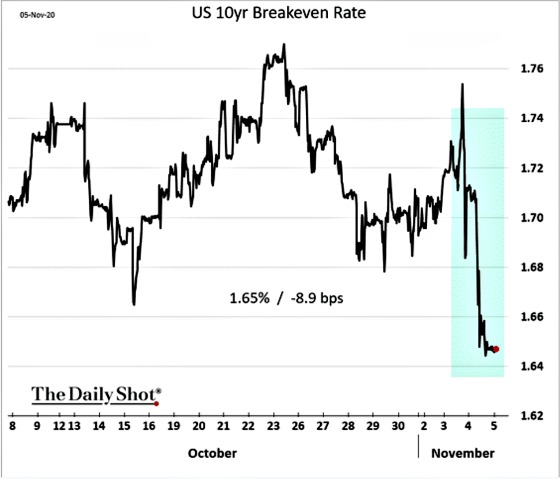 Nominal 10-year Treasury yields collapsed as well, although they are now back above 0.80%. 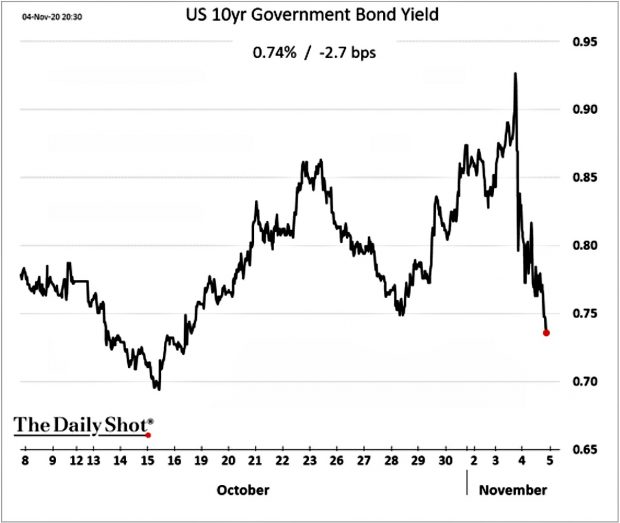 A big stimulus bill would have expanded construction activity due to a substantial increase in infrastructure spending. One can see how construction-oriented companies have underperformed as investors started pricing in a divided Congress. 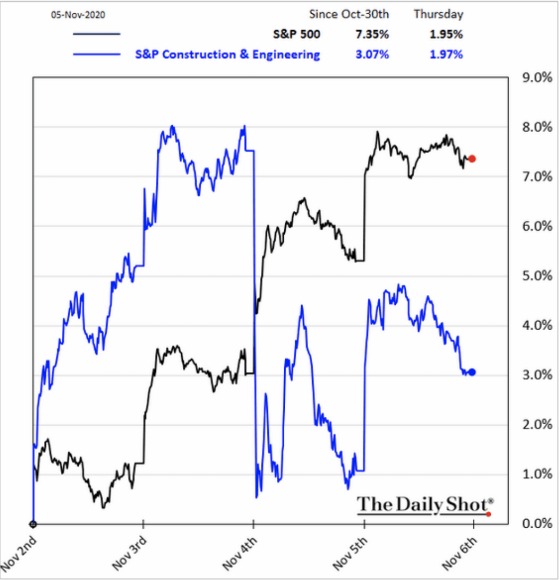 The Fed is still clearly on hold, as this headline shows.

Investors are continuing to price in the Fed remaining pat with regard to interest rates for a bit longer than the Fed has publicly stated. 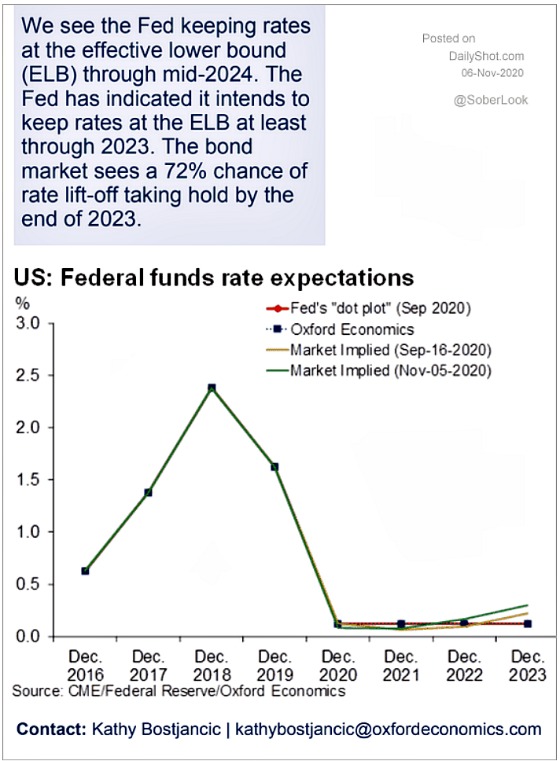 Markets are now back to believing that the Fed will have to do the economy’s heavy lifting if fiscal policy is more constrained. This has led to bitcoin performing exceedingly well, particularly in the aftermath of the election. 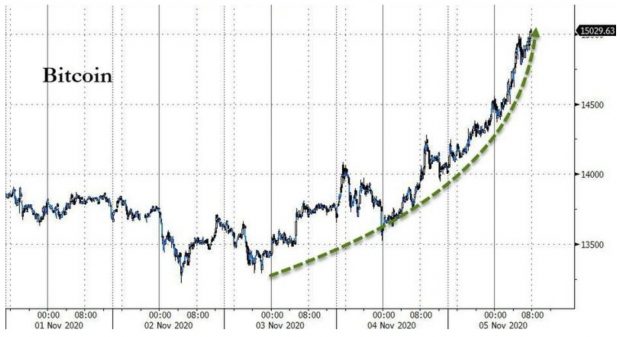 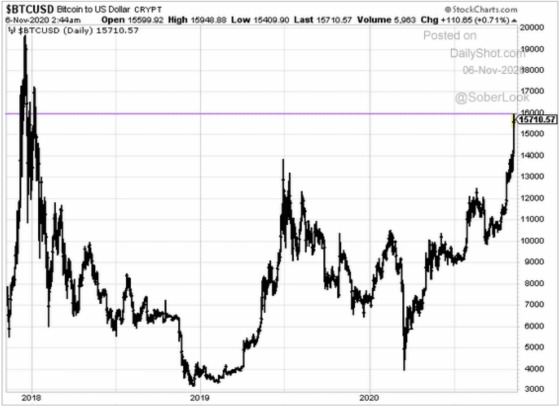 The simultaneous sharp rally in stocks and bonds (which is quite unusual) is an indication that the market expects the Fed to step in to continue to support asset values through quantitative easing and continued low-interest rates. 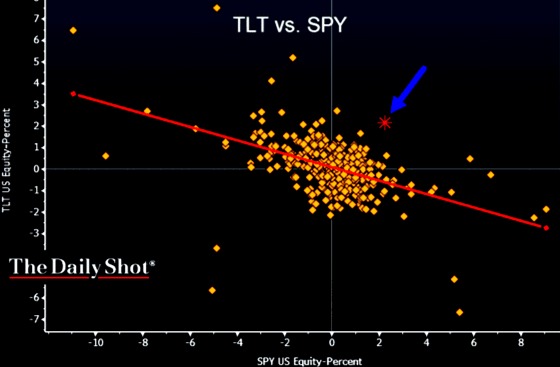 If history is any guide, then investors may be positioning themselves to have more of a risk on appetite. 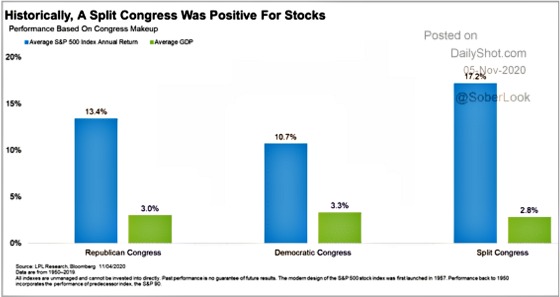 China is the only large economy offering investors positive real yields. This should continue to have investors searching aggressively for yield, which should benefit apartments, especially as borrowing rates are projected to stay quite low with the Fed on hold for at least through 2023. 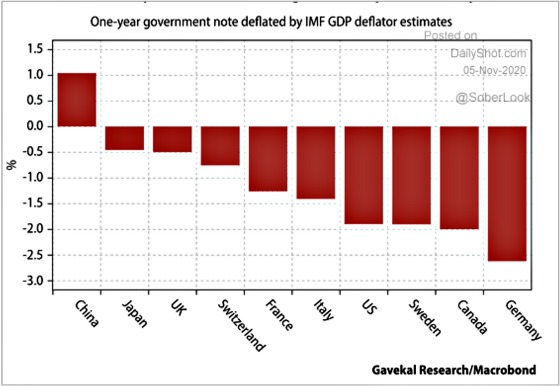 The Fed is very focused on the health of the labor market, which still has a long way to go to regain the jobs that were lost in the wake of the Covid recession. 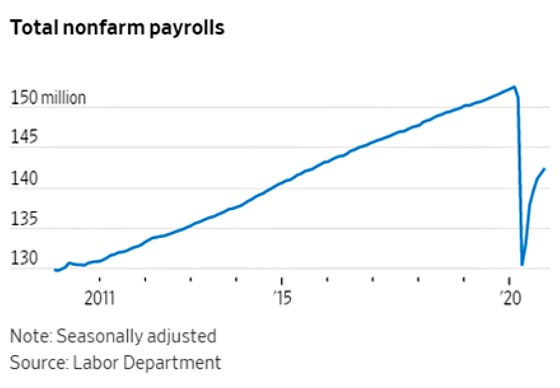 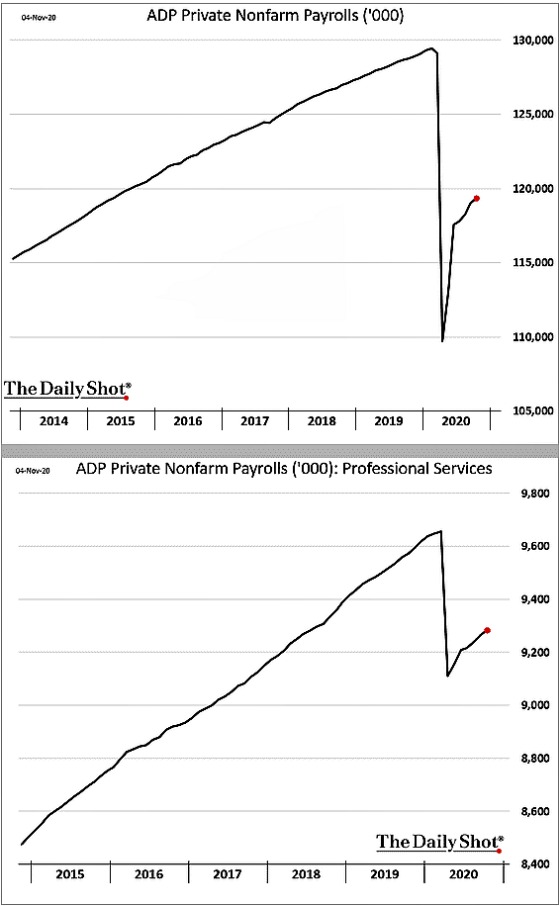 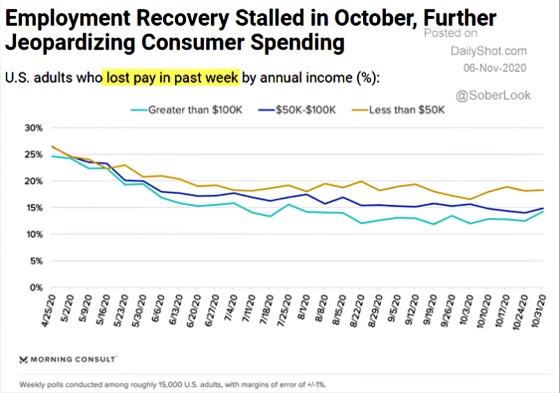 If gasoline demand is an indicator of economic activity, then, like the labor market, we still have a long way to go to get back to where we were pre-Covid. 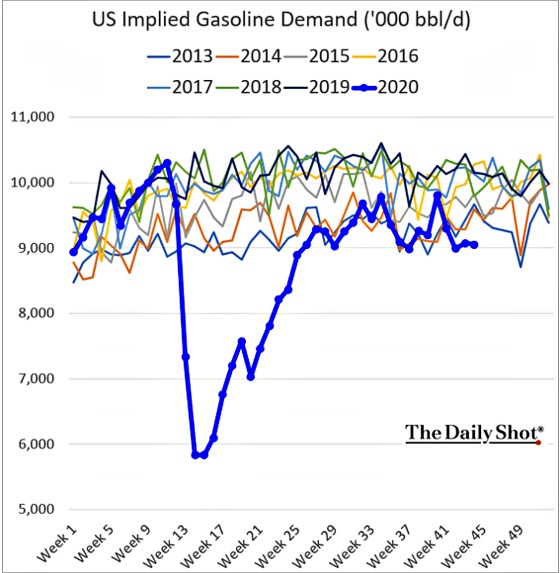 Since I started with politics, I will come full circle and end it with it as well. This chart represents the polarity that has been developing in American society over the last 40 years, with a particular deceleration over the last 15 years. In general, most people have had a favorable rating towards their own party, but it has deteriorated terribly over the last 15 years relative to the other party. 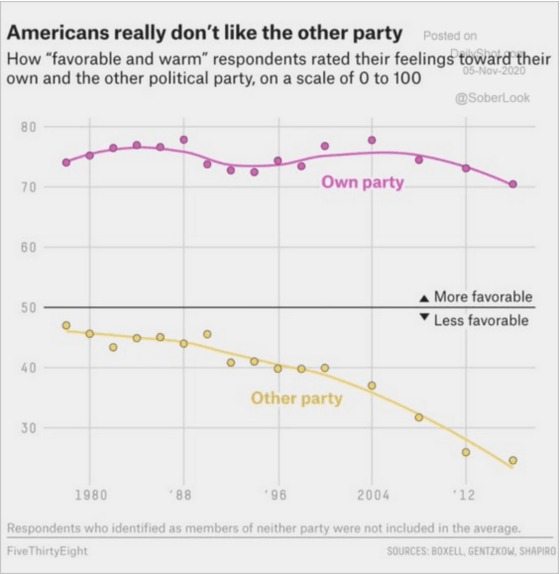 And here, one can see how Democrats and Republicans’ priorities are so different and how this can feed into the disdain they have for each other because what they prioritize is so different and looked down upon by the other party. 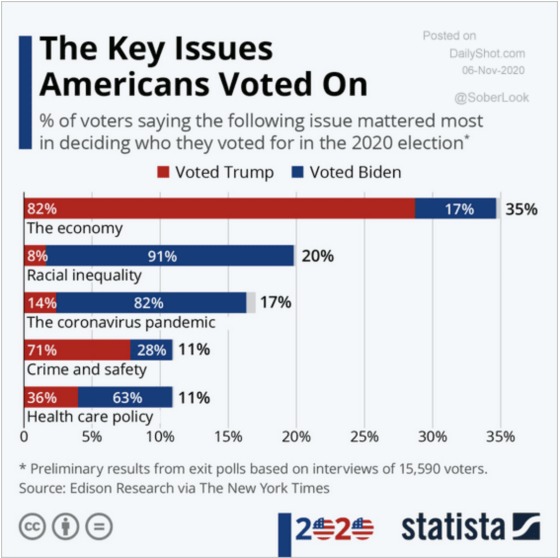 If you’re looking at the election results from a long-term perspective, then it’s hard to view the outcomes as anything but favorable for the Republicans based on the following.

Democracy can be messy but, as Winston Churchill said,