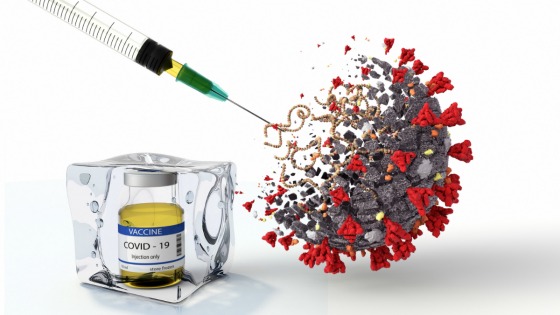 Last Monday’s announcement by Pfizer that its Covid-19 vaccine was more than 90% effective in preventing the illness sent an earthquake through financial markets, eliciting the worst day in history for momentum stocks. Momentum stocks have been the best performers and investors invest in them believing that strength creates more strength which will lead to outperformance. It’s historically been a good strategy until it’s not. The following chart from Bloomberg shows how statistically improbable November 9th’s move in momentum stocks was. 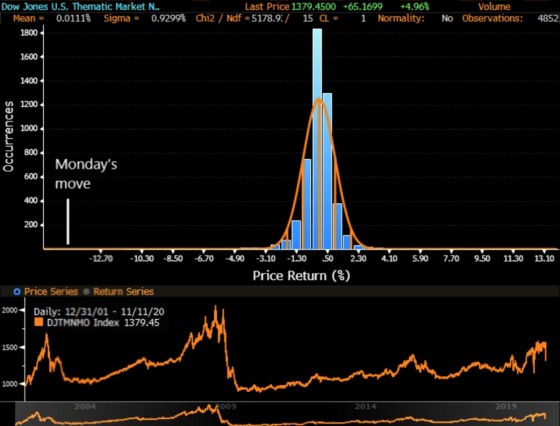 There was a huge rotation from growth stocks like Apple, Amazon, Facebook, Netflix, etc. that have grown and prospered not only during Covid but as a result of Covid, to value stocks that have been crushed by the lockdowns. For example, AMC Entertainment’s stock jumped by approximately 50% on Monday after the Pfizer announcement in the hopes that life will be able to get back to normal and there really is light at the end of the tunnel. It has since pulled back by approximately 30%. I can understand why and I have a lot of questions about the vaccine.

I am as eager as anyone else to have an effective and scalable vaccine because clearly, as the following chart shows, things are getting worse and the economic and human costs have been terrible. 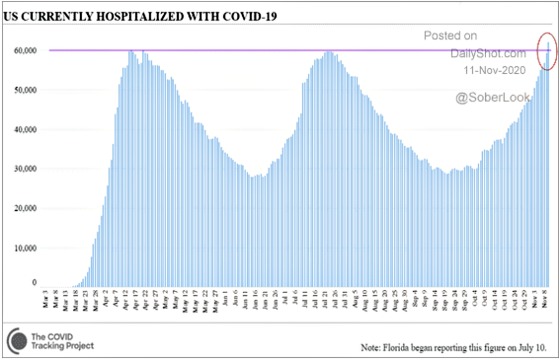 And people are still frozen in terms of traveling which is extremely painful to the economy and the recovery of the labor market. 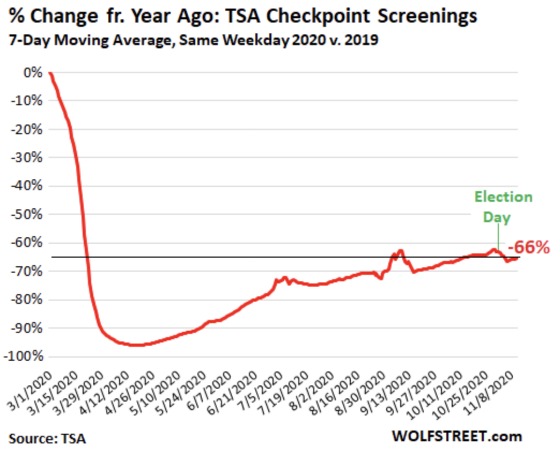 I’m obviously no virologist but from what I’ve read, there are going to be extraordinary challenges to produce and distribute this vaccine on a scale large enough to confer herd immunity.

First of all, we have no idea how long immunities last since this data is still so new. There has been some research suggesting that it lasts for six months but it’s probably still too early to know with any amount of confidence.

The real challenge has to do with the incredibly low temperatures that Pfizer’s vaccine has to be stored at to remain potent. I’ll start with this chart to first put this challenge into perspective. 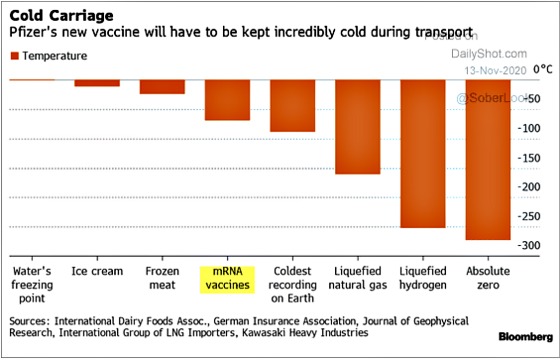 ProPublica gives a good overview of the delivery and storage issue:

The Pfizer vaccine is unusually difficult to ship and store: It is administered in two doses given 28 days apart, has to be stored at temperatures of about minus 100 degrees Fahrenheit and will be delivered in dry ice-packed boxes holding 1,000 to 5,000 doses. These cartons can stay cold enough to keep the doses viable for up to 10 days, according to details provided by the company. The ice can be replenished up to three times. Once opened, the packages can keep the vaccine for five days but can’t be opened more than twice a day. The vaccine can also survive in a refrigerator for five days but can’t be refrozen if unused.

Bloomberg gives a higher-level picture of why many developing countries are set to give the Pfizer vaccine a pass:

….Countries will need to build from scratch the deep-freeze production, storage, and transportation networks needed for the vaccine to survive. The massive investment and coordination required all but ensures that only rich nations are guaranteed the access — and even then perhaps only their urban populations.

“Its production is costly, its component is unstable, it also requires cold-chain transportation and has a short shelf life,” said Ding Sheng, director of the Beijing-based Global Health Drug Discovery Institute, which has received funding from the Bill & Melinda Gates Foundation…

“If there is a protein-based vaccine that could achieve the same effect as an mRNA vaccine does and there’s the need to vaccinate billions of people every year, I’d go for the protein-based shots in the long run,” Ding said….

“The requirement for extremely cold temperatures is likely to cause spoilage of a lot of vaccine,” said Michael Kinch, a vaccine specialist at Washington University in St. Louis.

I have found that www.nakedcapitalism has some of the smartest commenters on important issues so I like to go there to get more in-depth information and commentary related to vital issues related to finance, politics, economics, public policy, etc. The following comments are related to the challenges of Pfizer’s cold storage requirements. 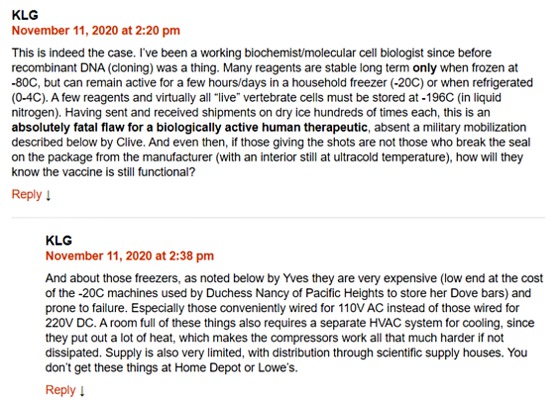 And here is more about challenges related to the freezers needed to keep something stored at such cold temperatures and the challenges of using an mRNA-based vaccine. 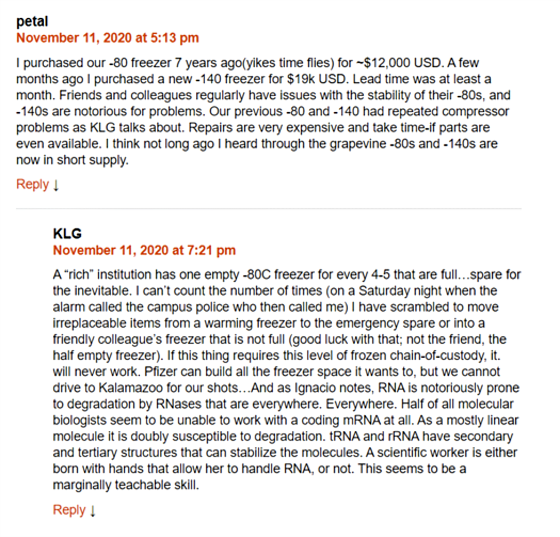 Here is some more information related to mRNA, which has never been used in a vaccine, so we don’t know the long-term effects of this on humans. According to Charles Smith from the Of Two Minds Blog,

Messenger RNA was only discovered in 1961. DNA is the set of instructions, the “blueprint”, and mRNA is a key part of the cellular machinery that copies a strand of the DNA “blueprint” and builds a protein-based on the DNA instructions.

Moderna is another leader in producing a potential Covid vaccine and, like Pfizer, it’s vaccine is also based on mRNA. It doesn’t need to be stored at temperatures as cold as Pfizer’s, which gives it an advantage. The following discusses Moderna’s vaccine in the context of the novelty of using mRNA.

Here’s a recent description of this mechanism from The Atlantic magazine:

“Moderna works on RNA vaccines–injecting not proteins but the molecules of nucleic acid that encode the instructions for building the proteins. Your cells use RNA to instruct their builders to make proteins all the time; the RNA is like the blueprints or schematics that tell the workers on the factory floor what to build.”

And here’s another description by a doctor writing in the independent.co.uk:

This is the hard-to-swallow truth about a future coronavirus vaccine (and yes, I’m a doctor)

“Moderna’s messenger RNA vaccine, on the other hand, is completely new and revolutionary to say the least. It uses a sequence of genetic RNA material produced in a lab that, when injected into your body, must invade your cells and hijack your cells’ protein-making machinery called ribosomes to produce the viral components that subsequently train your immune system to fight the virus. In this case, Moderna’s mRNA-1273 is programmed to make your cells produce the coronavirus’ infamous spike protein that gives the virus its crown-like appearance (‘corona’ is crown in Latin) for which it is named.”

Given all of this, this is why I’m in alignment with Fed Chairman Jay Powell regarding the vaccine and its economic impact.