The Positive Power Of Network Effects on Real Estate 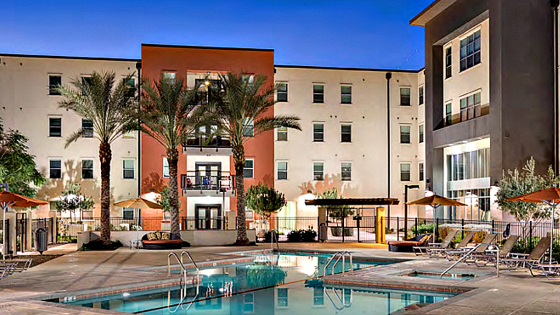 Network effects are extraordinarily powerful. The more people that join the network, the more valuable it becomes to be part of the network, which leads to more people joining. Entrenched, valuable networks are very hard to dislodge and offer great competitive advantages. Think of Facebook, Amazon, Apple, Google, Netflix, just to name some of the most well-known ones. The same can be said for cities too on a lesser scale and, although usually slower to unfold than internet based networks, they can see their value increase over many years, and even centuries, if you think of Manhattan, Paris, London, Rome, etc.

The Power of a Network

When an area develops it begins to create what we call “heads in the bed.” A growing residential population has obvious needs to be satisfied such as grocery stores, restaurants, pharmacies, etc. to provide valuable conveniences. As more people move in then there becomes a larger base of consumers to support those businesses which leads to more investment in the area and increased housing demand as more people want to live there. This does take time but once critical mass is reached then it can become a very vibrant, sustainable ecosystem.

There has clearly been a trend in the United States of younger people moving to live, work, and walk urban locations to take advantage of all the amenities, the vibrant social life, to be less dependent on cars, and to be closer to work. There is an energy, vibe, and excitement that is not present in the suburbs which makes it particularly appealing to younger people. Jane Jacobs, who was one of the great thinkers about urban planning, believed that at the core cities are about ideas.By having a diverse population cross-pollinate in a dense environment people can be made aware of the best and brightest ideas for retail establishments as well as observe fashion trends and allow for greater interactions to share ideas.

Urbanization and very dense living have obviously been around in the United States since the mid-1800s. Ultimately this changed after World War II with the creation of the interstate highway system, the G.I. Bill that allowed for returning vets to purchase homes with very favorable financing and the creation of a very powerful development and financing ecosystem to build homes on a mass scale to allow for the explosion of the suburbs. As higher-earning people left urban areas, many cities fell into disrepair and crime took over with the result being population loss and economic stagnation and regression.

The tide of urban decay is no longer as pervasive as it once was and in certain high-income areas, it is reversing with urban cores becoming quite vibrant. According to a recent article in the Wall Street Journal, this trend is spreading beyond the traditional urban living cities like New York City and Chicago. The following chart shows how cities like Pittsburgh are seeing high growth rates among young and well-educated people who make good livings. This makes sense because the cost to build in urban areas is much higher than in the suburbs due to the higher density development that often requires underground parking and steel or concrete construction. In addition, the land is also more costly. For developers and investors to earn a compelling risk-adjusted return these projects need to attain higher rents and, therefore, appeal to higher earning renters. According to the article,

“A range of factors is driving the urban influx, economists say, from job growth and declining crime in cities to young professionals waiting longer to have children—or deciding not to have them at all. Tighter mortgage lending and concern about homeownership risks also weigh on young people, turning many into long-term renters.” 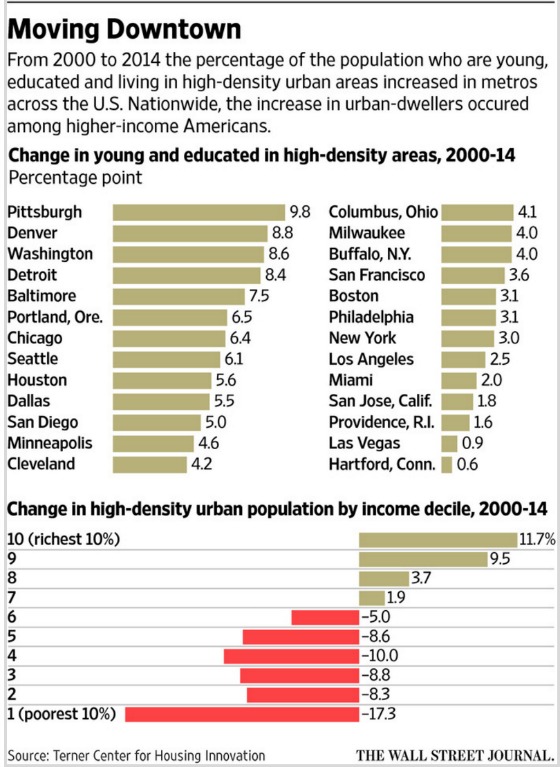 The chart shows how the wealthiest areas saw their urban populations rise between 2000 and 2014 while the less wealthy ones and poor areas saw a flight from urban areas. Presumably, this is because of deteriorating quality of life and crime risk. According to the article,

Supply creates demand when it comes to apartments.Click To Tweet

We often say that, to a point, supply creates demand when it comes to apartments. Building high-quality communities in good locations will bring more people into rental housing in these areas. Of course, markets can get overbuilt but developers can offer incentives to entice people to form new households which hurt their returns but still brings more people to the area. And once enough housing gets built in an area, then it can become a very compelling place to invest for long periods of time due to the network effects.

Because safety is so important for people to stay in cities and have others move there, apartments have and will continue to play an important role to make cities safer. Rental housing is the natural pioneering form of housing in a redeveloping area because most individuals will not take the risk of making such a large financial investment until enough critical mass has occurred in the area to prove that it has become economically viable. As a result, developers will shy away from building for-sale housing. This leaves apartment developers to fill the void. While each building represents a large investment, it typically is a far smaller percentage of the net worth of the developer and investors than for someone buying a new home. Thus, while an unsuccessful investment may be frustrating and disappointing, it should not be ruinous financially for apartment investors, whereas for a new homeowner who loses all of his or her equity, that can be financially disastrous. Hence, the reason why apartments are the logical first type of new housing in redeveloping urban areas.

New apartment buildings can deliver a meaningful number of units at one time to be managed by well-capitalized, professional management companies and owners to make sure that residents are screened, security is put in force, and the buildings are kept in good working order. When real estate is owned by poorly capitalized, unsophisticated owners, then this can lead to properties that can fall into disrepair and run the risk of lowering property values resulting in a movement out of the area at its most extreme. Professional apartment owners can build a critical mass of housing to draw people to the area to prove that it’s viable and their financial strength and management capabilities can ensure that this is an area that businesses and residents can feel confident will be well maintained and be attractive for people to live in for many years to come.

I thought I would leave you with one last chart to show that the trend of younger people driving the growth and energy in higher-income cities is not just restricted to the United States. The following chart is a fascinating depiction of what has happened to the population of London by age cohort in 2014. The only growth has come from younger people while every other category is exciting London. 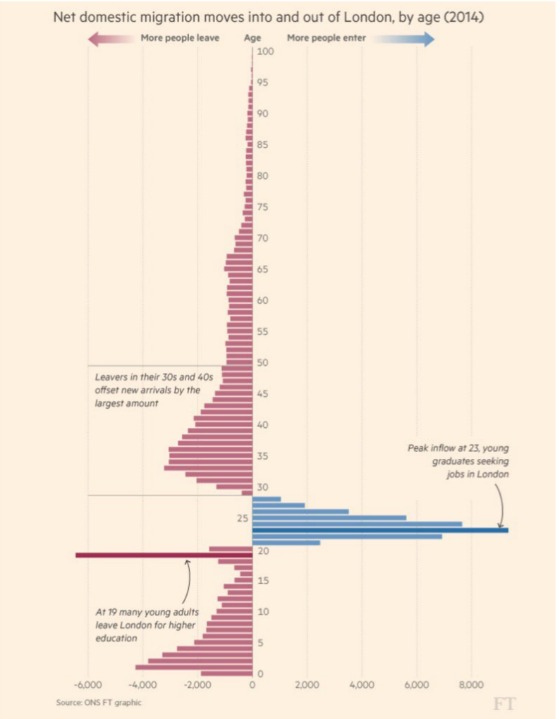 At CWS we believe that building high-quality communities in good locations will bring more people into rental housing in these areas. Our network of partner investors gives us the financial strength to ensure that in these communities businesses and residents can feel confident that the community will be well maintained and be attractive for people to live in for many years to come.

What are your thoughts on being an integral part of a real estate network?