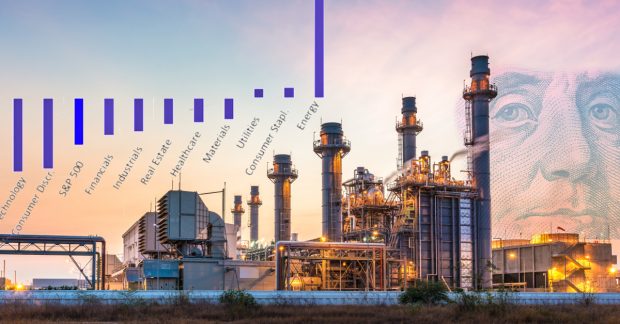 A little over six months ago I wrote about what was for a long time a disastrous investment that I made in a coal company that I purchased prior to Covid and subsequently dropped 80%. The post discussed many of the compelling reasons to hang on to the company because coal producers were extremely well-positioned to capitalize on very favorable supply/demand fundamentals. I didn’t mention the name of the company in the article but it was Alliance Resource Partners, L.P. (ARLP)

I can finally come out of my hole of embarrassment and shame and now say that I am in the black on my investment in ARLP.

Last week ARLP provided an early overview of its first-quarter earnings and the market very much liked what management had to say. The following chart shows the stock’s performance over the last six months, near the time when I wrote the previous piece that discussed the company. 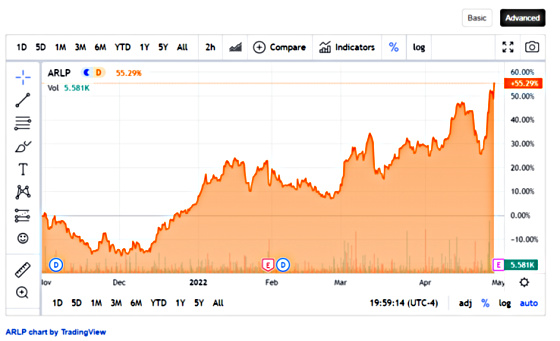 Why were investors so pleased with what management had to say? It all comes down to extraordinary pricing power. ARLP has a large percentage of its production tied to longer-term contracts which are very much below market in terms of the price they’re receiving. With coal demand recovering, especially internationally as countries try to shun energy from Russia, including coal, the price has gone up dramatically, which enables ARLP to deliver uncontracted supply at very high prices.

The following chart shows why companies like ARLP would enter into long-term contracts. Until recently, the price of coal was very steady, and having a predictable price and volume could help them run their businesses with more predictability. 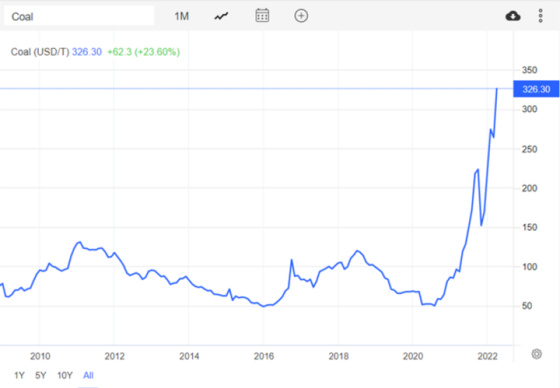 This next chart shows the price of coal over the last year. When I wrote the previous piece in October 2021, one can see that the price had spiked. And yet, since then, it has shot up even more, albeit it is down from its high, but still substantially higher than where it was in October. 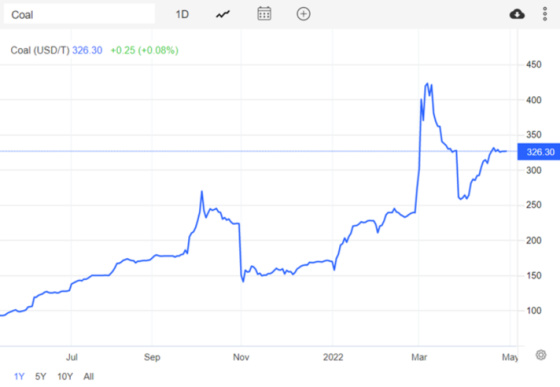 From the earnings report, it appears that ARLP was able to capture this dramatic increase in coal pricing for some of its 2022 volume. A contributor at Seeking Alpha did an analysis of ARLP’s earnings release and he came up with some very compelling insights as to how strong ARLP’s pricing power is.

At year-end, Alliance (ARLP) had committed and priced 32.1mt for 2022. As of Tuesday’s release, the company had committed and priced 34.2mt. However, the additional 2.1mt led to a full $11.3 / 24% increase in the average revenue per ton for all of 2022 committed volumes. The math would indicate that the incremental 2.1mt of committed sales were contracted at over $230 per ton, suggesting Alliance (ARLP) is successfully exporting thermal to the seaborn market. Adding $11.3 dollars per ton to the company’s 34.2mt of contracted volume leads to EBITDA improvement of ~$386m, or ~$3.00 of incremental EPS.

In addition to generating incremental earnings, successfully exporting thermal coal out of Illinois is likely to lead to improved in-basin pricing for 2023 contracts. And that is exactly what weekly spot market data suggests is happening: 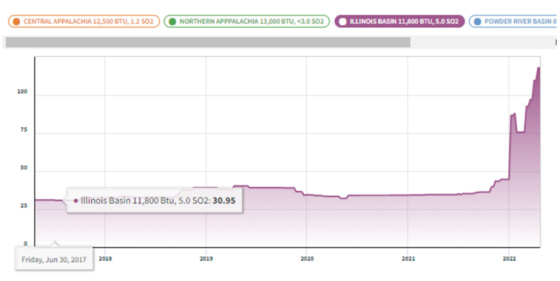 There is growing concern about energy exports pushing up costs for Americans. The chart above speaks to this happening right now for coal. As the analyst wrote, diverting badly needed supply to overseas buyers has served to increase the price for the lower remaining domestic supply. Of course, there are a lot of geopolitical reasons to help lessen the pain of very high energy prices for Europe given its much greater reliance on Russian oil, gas, and coal so I don’t see limiting energy exports being a material risk unless it really hurts the economy and turns voters against incumbents. Right now my sense is that most Americans want to support Ukraine and do what we can to inflict a lot of pain on the Russian military and economy.

Having energy investments has been very much a winning strategy as the following chart shows how they have dramatically outperformed all other sectors over the last four months.

We have to go back to the 1970s to find a more powerful commodity pricing surge than what we have been experiencing today. 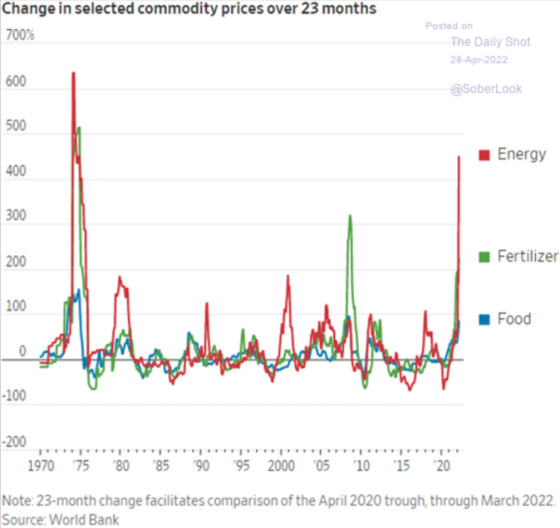 And yet, this next chart really caught me off guard. Despite the powerful fundamentals, investors have been liquidating their positions in commodity ETFs. Perhaps they have fears of an economic slowdown or maybe they felt like the runup has been overdone. 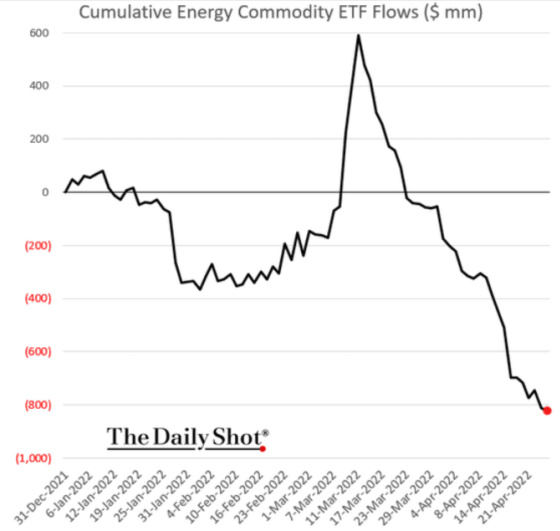 Fortunately for the United States, the combination of energy efficiency and more supply has resulted in the share of energy of overall consumer spending declining, particularly between 2012 and 2020. This trend does seem to be reversing, however, with materially higher prices and demand continuing to grow. Supply is also a lot more challenging to grow due to the difficulty of getting more inputs to produce more energy. 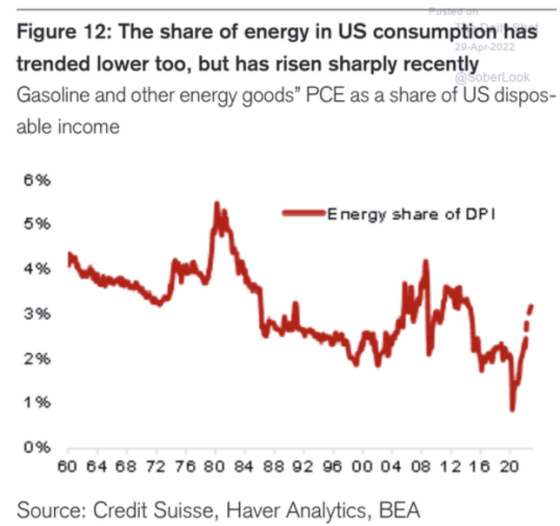 The supply situation continues to remain challenging for both oil and gas. 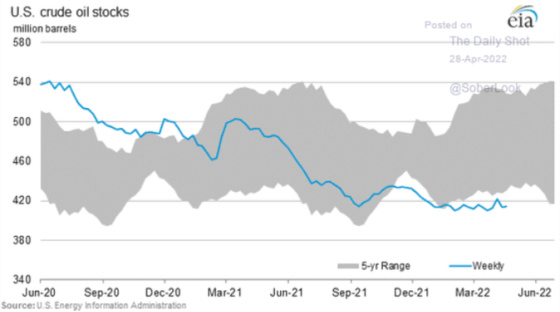 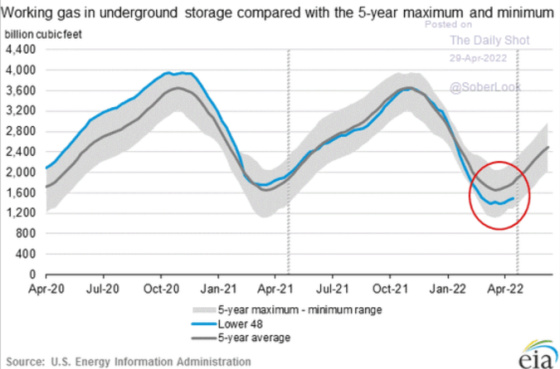 This chart shows what projected oil and gas demand will be under different scenarios from the International Energy Administration. The most conservative one assumes that net-zero emissions goals are met while the STEPS is based on the stated energy policies of countries. Regardless of the scenario, without a continued significant investment to generate new supply, we will have a tremendous shortfall which would presumably lead to higher energy prices. 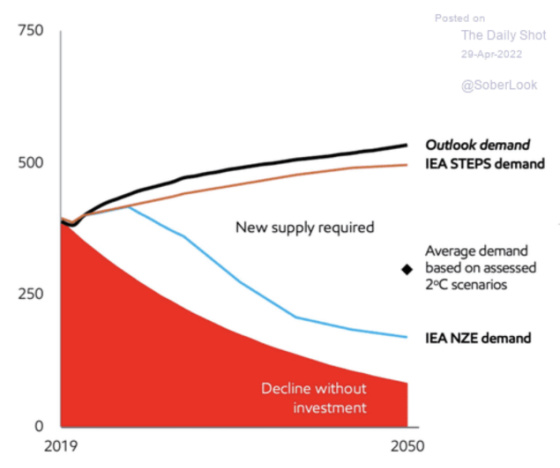 There is no separating energy from politics. Headlines like this one will only serve to rile up populist rhetoric about price gouging among energy companies. I’m not saying Exxon should do anything differently but this will cause some political heat to be directed its way. Of course, most politicians tend to forget the cyclicality of the industry and that there are definitely some very lean years that the good years help to subsidize. And none of them will look at their own demonization of the fossil fuel industry as a contributor to the very significant supply challenges we are facing due to underinvestment in the industry.