Learning from 9/11 to Speculate on the Future of Offices 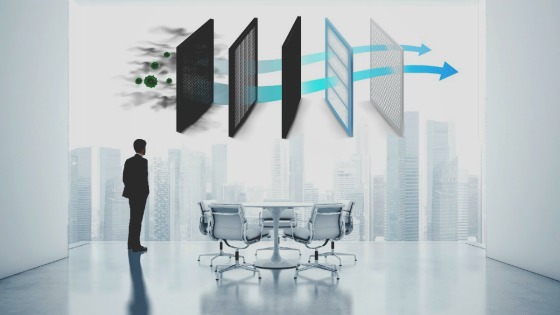 Before action is taken it first must manifest as a thought, however fleeting. And, if actions are part of a more strategic thought process seeking to produce longer-term results, then thoughts are almost always translated into speech and/or writing in order to communicate the thinking and desired outcomes to others who may be necessary or valuable to help bring the desired outcome(s) about. Of course, not all thoughts are converted to speech or writing (thankfully), and not all speech or writing are converted to action (“all talk and no action”). With that being said when enough people with influence and power are talking or writing about something then investors should take notice and consider taking into account this information when deploying capital.

I bring up the power of thought, speech, and action because I think paying attention to what decision-makers are saying can shine a little light on trends that might become increasingly important over time. With Covid restrictions leading to millions of people working remotely (primarily from home) virtually overnight and being able to do so effectively due to Zoom, Microsoft Teams, etc., the vitally important question for businesses, and most importantly office building owners, is how much less office space will be needed as occupants make decisions regarding their office space consumption as their leases reach their end dates?

To gain some insight into what business decision-makers are thinking, Bloomberg used artificial intelligence to scan the transcripts of approximately 4,800 investor calls by public companies between July 21 and December 8. Let me jump right to the punch line. This is what Bloomberg determined.

In 4,767 global earnings calls between July 21 and Dec. 8, about one in eight machine-generated transcripts revealed that firms were rethinking their real estate needs, with many on track to save millions of dollars in the process.

To further corroborate what CEOs and CFOs are saying, Bloomberg also sights a recent survey done in the U.K.

An October survey by the U.K.’s Institute of Directors found that 74% of companies planned to make more use of working from home once the pandemic subsides, with more than half intending to reduce the amount of workspace they use.Click To Tweet

The article goes on to show how it’s not just office space that is at risk of being in less demand. It also cites a bank cutting 50% of its branches. One firm is even looking at consolidating its data center real estate. And while industrial real estate has been doing very well due to the eCommerce explosion, firms in hard-hit industries, such as airlines, don’t need as much industrial space as they did pre-pandemic and they will be looking to cut back.

Even prior to Covid, office-oriented REITs like Vornado and SL Green were under pressure in terms of their stock prices. After Covid, their share prices dropped quite significantly. They are down by 50% to 55% over the last five years with the bulk of these losses coming in the wake of Covid. 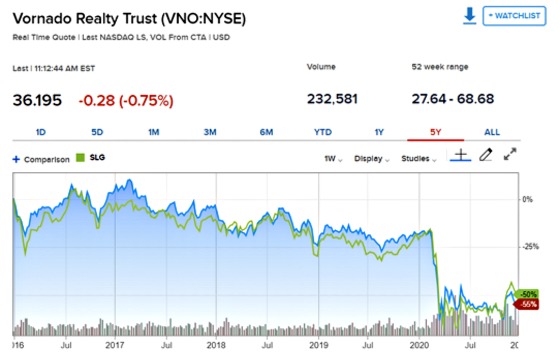 With trillions of dollars invested in office buildings around the world and the predictability of future cash flows becoming more uncertain, this will most likely result in tighter lending standards. This will have a ripple effect as tighter lending standards will result in either larger down payments and/or higher rates which will serve to lower property values absent a corresponding increase in cash flow. Unfortunately, pressures on cash flows should only continue to mount over time if companies do as they say and cut back on their space consumption. This will also put pressure on costs as leasing commissions and tenant improvement allowances will be meaningful in order to attract and retain more scarce tenants. There will also be cost pressure to invest in building air purification systems (discussed below). Of course, it could come to the point that rents become cheap enough to entice companies to take more space than they otherwise would have or the remote work phenomenon is fleeting. I think the latter is magical thinking. There could be some validity to the former. Only time will tell.

And when offices do open again in larger numbers, will workers feel safe to return in large numbers? This is where the pandemic may lead to a new subset of the office economy, somewhat akin to building and maintaining green office buildings. In an interesting opinion piece on Bloomberg, the author mentions the potential need for “Healthy Building” certification. We used to take security for granted when it came to airline travel until September 11. We have done the same for indoor air quality. That is, until Covid.

“It has become — I don’t know if I would say more important, because obviously, it was important from the get-go — but it’s becoming very prevalent.”

Knowing what we now know about airborne viruses and the importance of ventilation, humidity control, and filtration in controlling the spread of disease, it’s hard to imagine society will just forget and move on, he said. Nelson compared increased attention around the importance of indoor air quality to the reassessment of security measures following the Sept. 11 terrorist attacks.

“Hopefully it’s the last airborne virus,” he said. “But likely not.”

And just like we hoped that 9/11 would be an isolated disaster, we had to take action assuming that it wasn’t. The same goes for Covid. While we hope we never have another pandemic for over 100 years, we have to assume that this will not be the case and take the necessary precautions to lessen viral transmission if and when it appears again or in another form. Preparing for another pandemic, while also lessening the chances of one taking hold by investing in air purification, has the potential to be a very large market.

Carrier estimates that demand for indoor-air quality improvements could generate $10 billion in new revenue opportunities across the industry, including $165 million of projects the company is already discussing with customers. Some 90% of a person’s life is spent indoors, and people are also realizing the impact air quality can have on allergies, asthma, and even cognitive capabilities, Nelson said.

Obviously, we are not only indoors in office buildings but in hotels, schools, and retail establishments, just to name some of the other major places we congregate. These too will have to invest in air purification and clean surfaces.

While Trane has always sold advanced technology that uses chemical reactions to clean the air, its typical customers were hospitals or labs. Purifying air with such next-level measures was a harder sell pre-pandemic because the air-quality benefits weren’t the kind of thing you could physically see, Dave Regnery, Trane’s president and chief operating officer, said in an interview. Now, customer inquiries are coming from all directions, he said. For example, Trane teamed up with biodefense company Synexis to develop a system that purifies the air but also coats and cleans the surfaces in the room. It’s marketing this to K-12 schools. Carrier is selling its portable OptiClean product — which both scrubs the air and creates negative pressure that prevents air from spreading from one area to the next — to retailers, hotels, factories, and more, Nelson said. Meanwhile, Johnson Controls is holding conversations with universities about designing pandemic-proof dormitories where each room can be transformed into a pressurized isolation chamber with the flip of a switch, Tyler Smith, executive director of the company’s healthy buildings program, said in an interview. “New buildings will be built differently because of what we learned” in the pandemic, he said.

I do think the 9/11 analogy has some application to indoor environments. After 9/11 everything changed when it came to security and huge investments were made to improve the background and screening processes of passengers and to make cockpits more secure. In addition, tremendous resources have been expended in the area of intelligence gathering and threat assessment to become aware of risks before they can become operational.

Although the TSA is not perfect by any means I think most of us feel that they have a system and general level of competence such that most of us feel safe flying, even if it can be an inconvenience at times. This was pre-Covid of course. I think people are going to need to feel a similar level of security when it comes to indoor places where distance is not feasible from a space or economic perspective. Our economy needs us to gather in large numbers again and so do our souls. We just need to feel safe.

I will wrap it up with another piece from the article that I think is a harbinger of something that will become a very big industry and a trend that could be quite significant as time goes by.

Executives from Carrier, Johnson Controls, and Trane all expect the increased interest in indoor air quality to ultimately translate into some kind of standardized climate-control rating system that indicates where buildings fall on the spectrum of things like ventilation, humidity control, filtration, and energy efficiency. This could be akin to or even an expansion of the Leadership in Energy and Environmental Design’s (LEED) ranking of green buildings or the Well system of assessing a facility’s impact on health and well-being; basically, a calling card of sorts that advertises how clean the air is in that particular office space or indoor arena. Once there’s a standard, progress can be measured and problems can be rectified through digital solutions that turn buildings into treasure troves of data, which can then be analyzed and mined for recommendations on how to improve performance. “There will certainly be more standardization of what constitutes a ‘good’ building,” Mike Ellis, chief digital and customer officer at Johnson Controls, said in an interview.

“The pandemic is a catalyst to think about real estate in a different way.”Click To Tweet