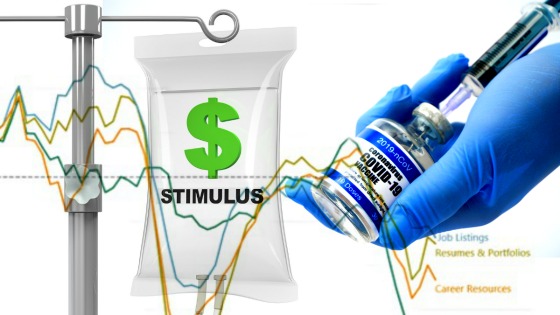 The jobs report released on Friday was disappointing.

Perhaps the report shouldn’t have been such a surprise on the downside based on this chart. 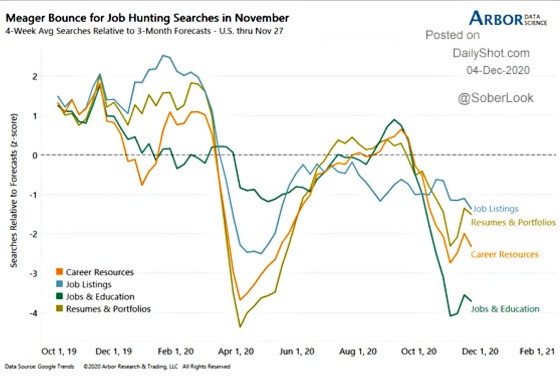 It would appear that job seekers are less confident about their prospects as they have significantly reduced their searches. This could be because of fewer jobs available, discouragement at having been rejected or not considered for other jobs, or perhaps less incentive to find a job due to government support. I imagine it’s a combination of all of these.

The weak jobs report would normally result in longer-term interest rates going down as investors would factor in lower growth, a more accommodating Fed, or both. The Fed has unequivocally stated that it will remain highly accommodating, so there’s no improvement in that area to price in. And while slowing job growth should be a concern for economic growth, the bond market actually priced in higher growth due to the belief that this report could be an important catalyst to get Congress to pass a new stimulus bill.

This is how the 10-year Treasury yield spiked higher after the release of the report. 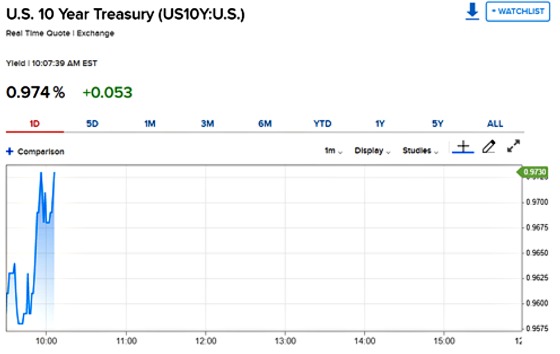 I remain skeptical that a vaccine can be distributed in large enough quantities. Enough people will take it to remove Covid as a key economic factor for a minimum of six months. 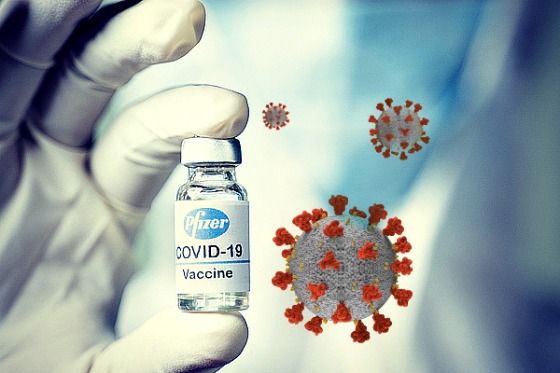 I hope I’m wrong. My reaction to the following report was akin to Captain Renault in Casablanca, who said, “I’m shocked, shocked to find that gambling is going on in here.”

Instead of 50 million doses shipped by year-end, we’re now down to 25 million, which is good enough for 12.5 million people. And let’s not forget that it has to be stored at -70 degrees before being transferred to more normal cooling, where it then has to be used within four or five days. Oh, and then there’s this minor little matter that is still not known.

This diatribe’s whole point is to point out that rolling out a safe vaccine to hundreds of millions of people in a short period of time such that people feel safe taking it is a herculean task and one that I’m not banking on to unleash huge pent up demand. I feel like another stimulus package is a good insurance policy to take out, as I have written about before, to buy us time to take Covid off the table to affect societal behavior.

Apparently, Nancy Pelosi agrees as well: The “virus needs to be crushed.” 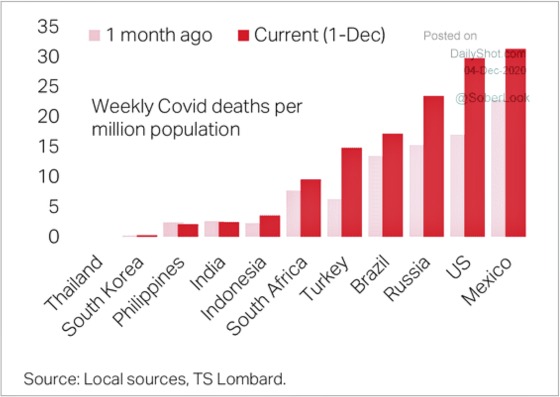 If there is one chart that depicts the decimation Covid has done to industry, as well as the recovery path projected when consumer confidence re-emerges, then it’s this one for the airline industry. 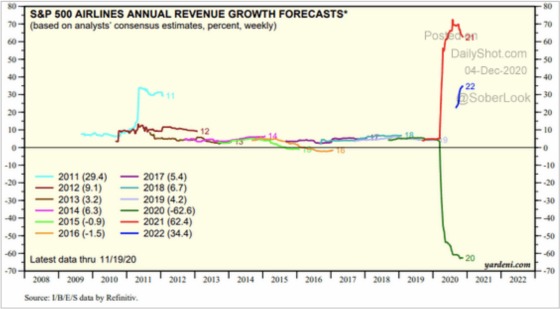 The market seems to think more recovery is on the horizon as the yield curve is at its steepest level since early 2018. A steep yield curve foreshadows faster economic growth while a narrow one projects the opposite. 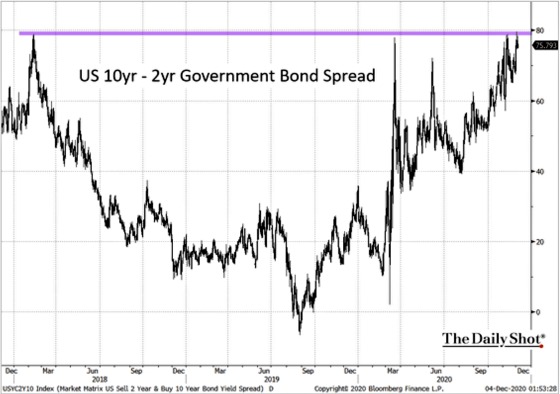 The last time the yield curve was this steep, the Fed was already raising rates and would continue to increase them by another 1% or so over the next 20 months to a peak of approximately 2.40%, only to reverse course in August 2019 when it started cutting rates.

Despite a steep yield curve foreshadowing stronger economic growth, the Fed had said that it has no intention to raise rates for the next few years, which is clearly different from how it reacted when the yield curve was this steep previously.

Here is a longer-term chart showing the spread between the 10s and 2s. It is still quite a bit below where it was during previous cyclical peaks. It will be interesting to see if it breaches 1.33%, which was the December 2016 high as there have been lower highs and lower lows, which is the market pricing in slower, longer-term growth.

With Covid having wreaked such devastation on a number of major industries, the tremendous amount of debt outstanding, which makes the economy more reliant upon lower interest rates, and demographic trends that are not favorable for fast growth, my guess is that we will continue on this lower trend in terms of the yield curve.

The Fed’s firepower and other central banks have increased the risk appetite of investors and driven nominal and inflation-adjusted yields to very low levels, as the next two charts show. 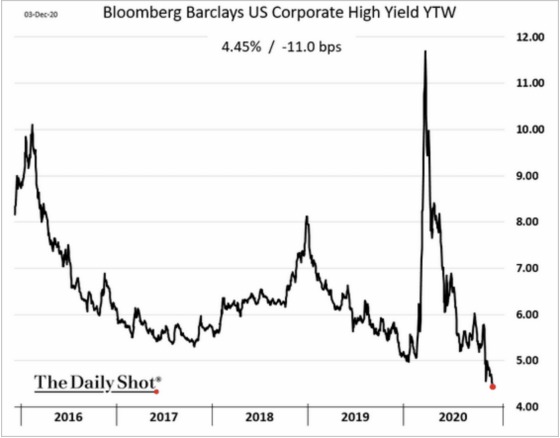 Interestingly, Japan, the poster child for deflation, has the highest real yields among major world economies. 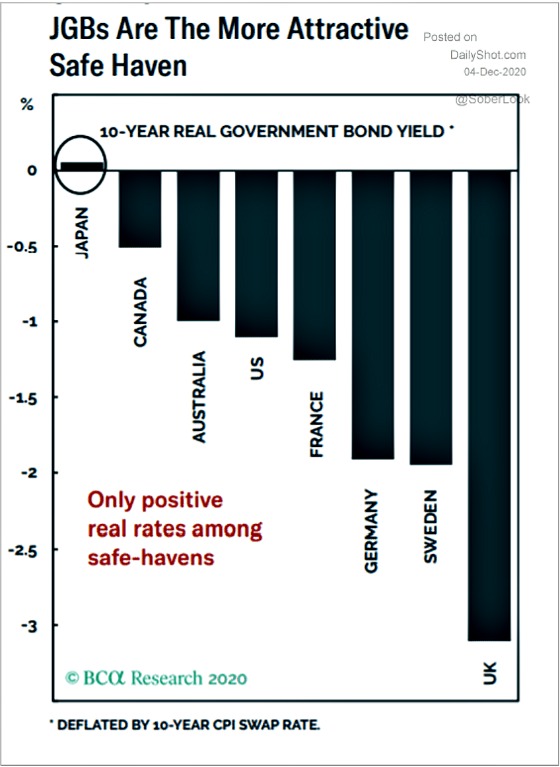 Real yields worldwide are negative, which means that investors are losing money after inflation when investing in 10-year government debt. This is due to aggressive central bank intervention and requires investors to take on more risk to avoid this. This has clearly benefited real estate owners, particularly in asset types that have held up well during Covid. These include industrial, self-storage, manufactured home communities, homeownership, and of course, apartments.

With real rates so low, will this unleash far more demand in the economy than supply can keep up with and push inflation higher as many fear will happen in a replay of the 1970s? 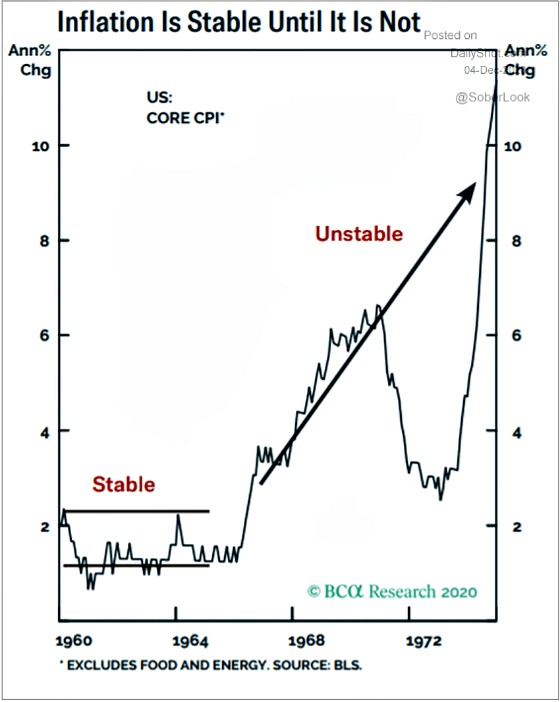 My bet is that it will not primarily be based on demographic factors that are well depicted here in the next chart. We don’t have the labor force growth to propel inflation higher, assuming past relationships hold. This is also true for Japan, the European Union, and China. India is the major global exception to this with a meaningful sized economy. 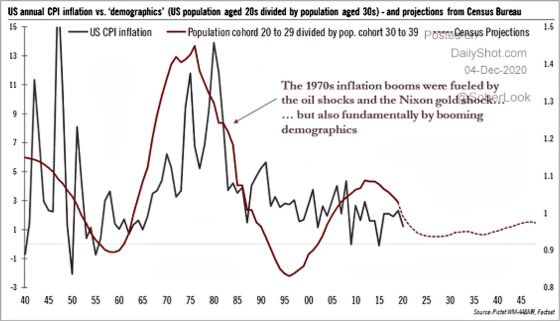 If I’m going to keep it real, I would say that the labor market slow down is for real. A vaccine will not be deployed in large enough numbers and adopted by enough people to meaningfully impact economic growth over the next six months, a stimulus package should be considered as a necessary bridge to destroying the virus to keep the economy afloat, and that even though 10-year yields are now approaching 1%. Real yields are negative. I think there are still too many structural forces to have both short and long-term interest rates reach their last cycle peaks (2.40% and 3.24%). This bodes well for real assets like apartments as there is positive leverage (borrowing rates are less than the unleveraged yield); it’s an essential business. It is well-positioned to produce growing operating income over the next 5+ years due to compelling demographic factors. And with global capital having more appetite for U.S. apartments, the prospects of capitalization rates falling are improving. And if you own suburban apartments, then, on average, you are attaining rent levels that were in place pre-Covid, as the following headline shows.

I continue to think that apartments are one of the cleaner shirts in dirty laundry. I’m just trying to keep it real.