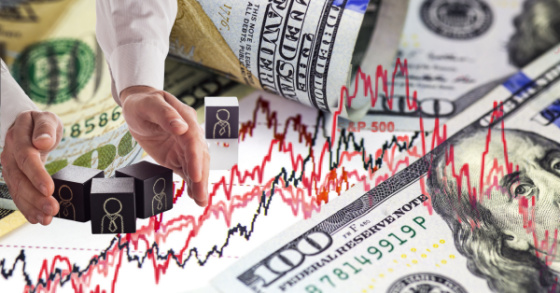 One can see from the following charts from Sentimentrader.com that the last 100 trading days have been one of the worst periods in terms of stock returns in modern history. 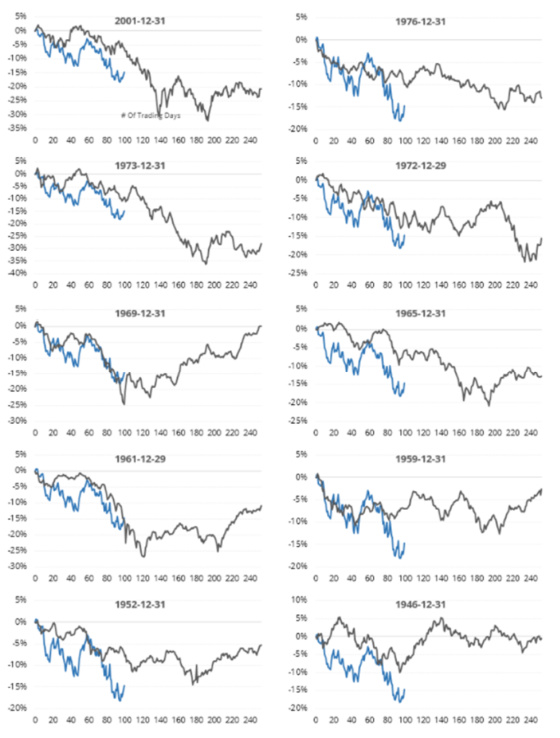 And while the jury is still out as to whether we will have a recession over the next year, if history is any guide then the stock market seems to be foreshadowing one. 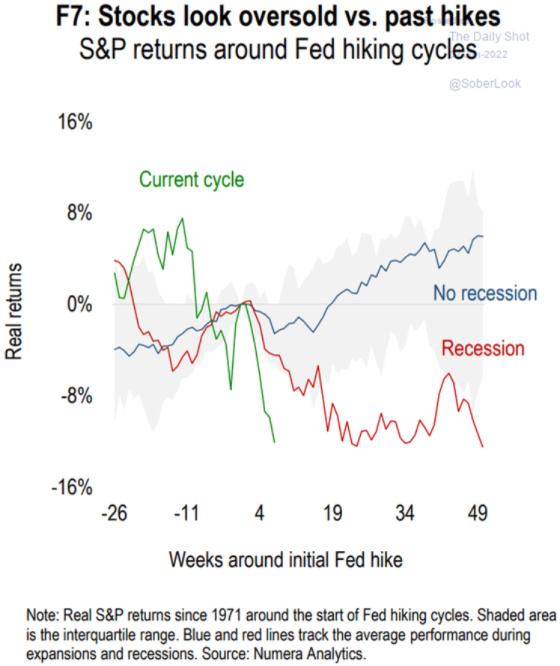 Jamie Dimon, the CEO of J.P. Morgan and one who can be prone to frank talk bordering on hyperbole, seems to think trouble is on the horizon.

On the other hand, here is the counter from Bank of America CEO Brian Moynihan.

Given Dimon’s focus on J.P. Morgan having a fortress balance sheet, recessions, or even economic hurricanes, can benefit his firm as it can take advantage of competitors who are not as strong financially to acquire assets cheaply or grow market share by putting pressure on the competition. A lot of what Jamie Dimon has predicted in the past hasn’t come to pass, but his reasoning is sound to be concerned given what’s happening with commodity prices, the war in Ukraine, and quantitative tightening just around the corner.

The carnage in the stock market has been particularly brutal for tech companies. And not even the largest, most profitable firms have been spared as the following chart shows. 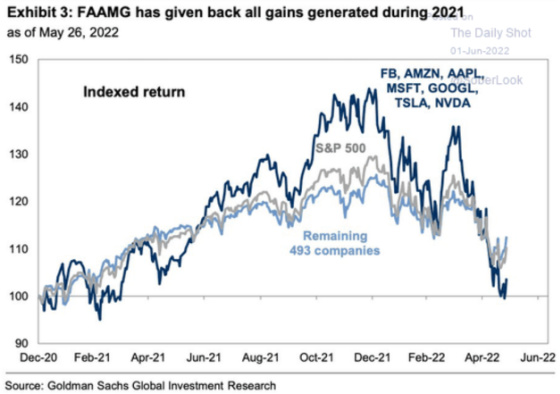 It’s often said that stock prices move ahead of company fundamentals such as sales and profitability. From recent announcements by some very large and significant-tech companies, one does get the sense that the mindset of executives has shifted from aggressive growth to a relentless focus on costs and profitability and that operating results are under some pressure. Salesforce is an example of this.

I found this excerpt from the article particularly interesting.

“We are hiring, but we’re doing it at a much more measured pace and focusing the majority of new hires that will support customer success and the execution of our top priorities,” Weaver said.

The company isn’t looking to make another big purchase at this point, Benioff said.

“We can see a rightsizing on a number of valuations I think that we’re all quite suspect of for quite a long time, but for us, you know, we’ve kind of laid our acquisition strategy down and we’re done for a while,” he said.

Clearly juicing growth through acquisitions is off the table for a while along with aggressive hiring. The name of the game is operating much more efficiently, which means cost control and expense reduction in some cases.

Another behemoth, Amazon, shocked the industrial real estate market when it recently announced that it is going to sublease some of its space. Amazon has become so big that it is becoming much more correlated with the overall economy. It clearly was a huge beneficiary from so many staying at home for much greater periods of time during Covid and they made huge investments in personnel and infrastructure to meet the demand. And now that a lot of that incremental demand is falling by the wayside, Amazon also has to adjust its cost structure accordingly.

Microsoft pre-announced that it would have to adjust its earnings and sales outlook lower due to a stronger dollar translating its foreign currency revenues into fewer dollars than projected. It will be interesting to see if there is more to the story when Microsoft releases its earnings during the third week of July.

If highly profitable companies like the ones cited above are facing some headwinds, imagine what smaller, unprofitable ones are contending with. This chart shows how a shockingly high percentage of NASDAQ Composite companies are not profitable. 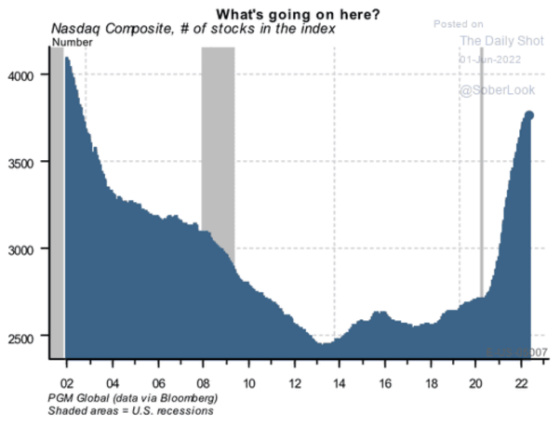 This was acceptable to investors when interest rates were very low and investors were willing to be patient because of the perceived growth potential of unprofitable firms. When interest rates started to rise and the Fed signaled that it was going to tighten credit and financial conditions, then everything changed. Investors now wanted very little to do with unprofitable companies because the risk was too high to wait for profitability that may never come when there are far less risky firms producing higher current returns that are better positioned to compete and generate profits in a slowing economic environment. 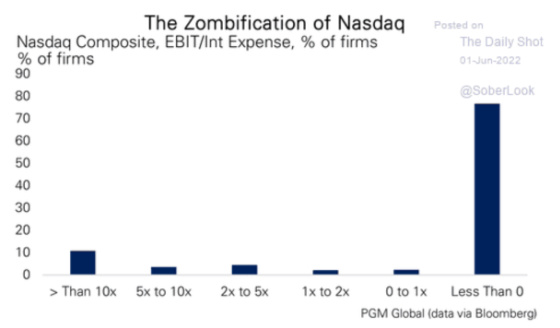 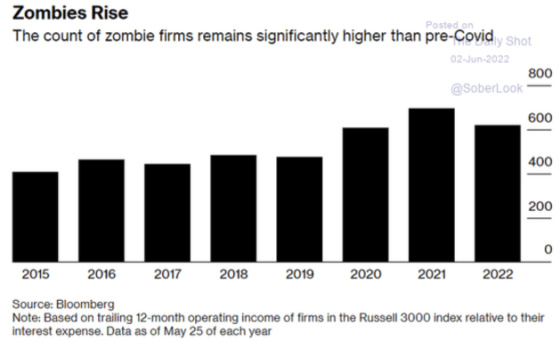 Over the years I have learned to follow where large capital flows are directed and that firms receiving this investment capital tend to go on hiring sprees. Capital follows anticipated future profitability or profitless growth provided it builds a very powerful and defendable moat that can then be quite profitable when investments in growth are curtailed (e.g. Amazon). Companies being rewarded by higher stock prices or increasing valuations with each funding round are incentivized to invest in growth, which of course includes hiring people. The converse is true as well. When growth prospects are diminished or turn out to be ephemeral, then investors want to see a relentless focus on the bottom line and this can often mean layoffs or a significant slowdown in hiring. This is what is starting to happen now.

Sequoia is one of the premier venture capital firms with a stellar track record. They believe that the public markets are pretty much closed-to-story companies that are losing money and do not have a sound and compelling path to profitability. As a result, they are pounding the table imploring their portfolio companies to ruthlessly focus on cutting costs to lower their break-even rates so that they can get to profitability far more quickly than on the previous path they were on.

The significant correction in tech stocks along with the IPO window shutting for venture-backed companies will unquestionably lead to a slowdown in hiring, and even a contraction for some firms. This is going to be another headwind for the economy, along with higher energy prices, the Fed shrinking its balance sheet in conjunction with higher interest rates, a slowing housing market, and the global tensions resulting from the war in Ukraine. And throw in this last chart of manufacturing employment close to contracting, it seems increasingly clear to me that the Fed is going to be tightening into an economy that will not only be slowing but may also be contracting as well. 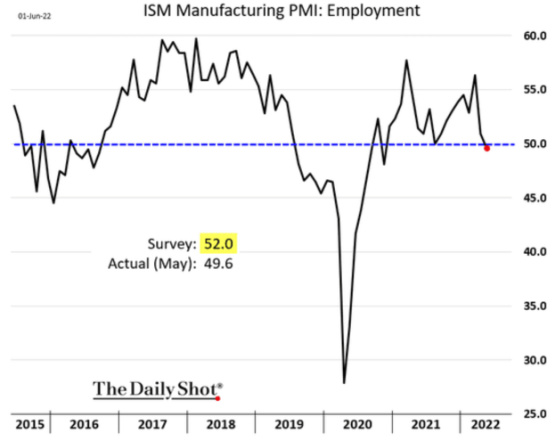